Catching up with Carol Blazejowski: Youth basketball, the WNBA, and reflecting on women's basketball history

For a routine Valentine's Day officiating assignment, my assignor told me I was working with "Blaze" -- that is the Carol Blazejowski, a certified official. When not managing the game, we had an opportunity to discuss the development of the women's game, reflect on her career, and a little about the WNBA.

Share All sharing options for: Catching up with Carol Blazejowski: Youth basketball, the WNBA, and reflecting on women's basketball history

Over the years I frequently met a new officiating partner in this manner, but this was one of those situations in which I met a former player whose games I covered - a player of legendary proportions whom I virtually idolized for her achievements both on the floor and off of it in the women's game.

"Hi, I'm Ray nice to meet you," was the simple response.

Where do you even start when discussing the career of Carol Blazejowski?

The 52 points scored as a Montclair State collegian at Madison Square Garden? Leading Montclair State, a small school in her native New Jersey to a Final Four? An international and pro career, the latter both on the floor and in the front office.

On this Saturday afternoon the thoughts of her career came back but the overriding fact was she was my officiating partner and we had a job to do.

On tap was a fifth grade girls travel game on a snowy afternoon. We went over a few things officiating-wise pre-game, greeted the coaches and were set to tip it off. The pre-game time, it should be noted, was also devoted to telling Carol my media affiliation and interest in the women's game.

On this level, the fifth graders cannot press until the game's final minute. I was thrilled about the lack of a press, especially after coming off an all-pressing sixth grade affair two days ago when both halves saw deplorable basketball and double bonus foul situations. Carol shared my feeling there is plenty of time in a career to press - it's better to restrict pressing in earlier grades, allowing the girls to learn half court before trying to pressure full. After that, we greeted the coaches and we were basically set to play.

As the game unfolded, it was clear we were on the same page as officials. To no surprise, as a former great player, Carol had a very keen ‘feel' for the game. Interestingly she mentioned during pre-game, having officiated basketball and field hockey during her Montclair State days to earn extra money for college - remember that was in the 70's when full basketball scholarships for women's players were rare. Carol said she got back into officiating a few years ago. On the court she, to no surprise, was confident, ran the floor well and generally did an excellent job.

The Nutley girls were given a test but defeated West Essex 34-23 in this Suburban League game. During time outs we went over game situations and had a chance to discuss the women's game in general.

That brought a laugh -- as I said, Mel is a great friend in and of the game. The humor centered over a few of his courtside lines that I shared with Carol. At the past Maggie Dixon Classic, Mel jokingly told me, "Rutgers lost today today, that'll teach them to put the press on the baseline." 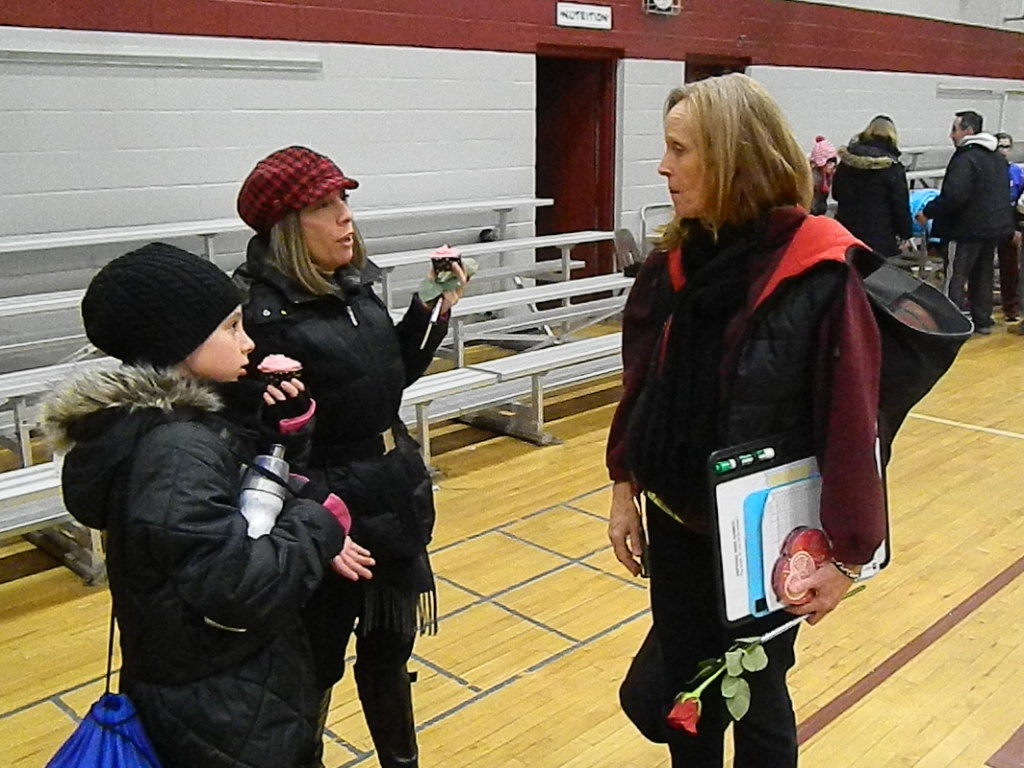 Former Rutgers player and Nutley coach Joyce Bukowiec (right, holding a Valentine's day flower from the players) talks with a parent and coach after the game. Photo by Ray Floriani.

The roots of the women's game run deep -- the connections and ties can be extremely close. Coaching Nutley was Joyce Bukowiec, who played for Rutgers under Theresa Grentz in 1980. Patty and Mary Coyle were teammates back then.

Both had and have Joyce's utmost respect as she said, "Patty (Coyle) has a tough rebuilding job at St. Peter's. She's going to get it done. Guaranteed. She's too good a coach."

On the West Essex bench, assistant coach Patty Marchese Gentile was a St. Peter's point guard during the outstanding Mike Granelli era at the MAAC school.

The game was one Nutley seemed to be in command of despite never being able to pull away. West Essex wisely used a zone defense, which allowed them to keep fouls to a minimum and guard against the back door cuts this Nutley team has executed during the season. As officials we both tried to let the kids play through a situation before making a foul call. You strive for consistency. No one is perfect but I feel we carried out our objective.

With the game relatively close, time outs were concerned more with reminding who has the ball on the next jump and how we will inbound, what team and on the baseline can they run or stay? I did get a chance to mention my WNBA work at one time out and interviewing players as Diana Taurasi, Elena Delle Donne and Britney Griner.

"Love Delle Donne's game," Carol interjected. "The GM in me would have taken Delle Donne over Griner in the draft."

After the game, we wish the teams and coaches well. In the locker room we go over a few things - there was not much to discuss as this game went very well and we really worked well together. It was the first time working with Carol, but it seemed like we were on the floor a number of times before.

Afterwards Carol recalled the 1978 season. Her Montclair State team went to the AIAW Final Four which was, for all intents and purposes, the first one. They were joined in the field by UCLA, Maryland and Wayland Baptist, a power back in those days. Despite her 40 points, Montclair was defeated by UCLA on Ann Meyers' birthday. In the consolation Montclair edged Wayland Baptist.

"Looking back it was an incredible time for a small school," she said.

Could a small institution like a mid to low major repeat that feat now? She agreed it would be possible but the deck is stacked and the task much tougher than nearly four decades back.

As we continued discussing the development of the game, I found that she is much in agreement that the mid-range jump shot has gone the way of the dinosaur. Carol feels it is a viable weapon and works with her son, a player at St. Peter's Prep in Jersey City, on perfecting it.

I mentioned that I enjoyed working with Gail Marquis during her days in stripes.

"I roomed with Gail during an international competition," Carol recalled. "At first we did not get along well -- it was the Queens College-Montclair State rivalry. Soon we got to know each other and become good friends."

We could have spent even longer discussing basketball but Carol was headed out to watch Duke play Syracuse.

These days Carol resides in Nutley. She is an administrator at her Montclair State alma mater. Giving back to the game she loves, Carol coached a youth team for several years in addition to her officiating.

It was an exciting experience working with Carol. Once the ball went up we were teammates on the officiating ‘team' - her exploits were momentarily put aside as concentration was on the game. Suffice it to say that she was an excellent officiating partner and I hope to share the floor with again. Soon.