As the 2014-15 NCAA season approaches, we'll begin breaking down the top prospects for the 2015 WNBA Draft in the next few days. But before moving on completely to next year, it helps to take stock of how the 2014 rookie class performed beyond those who got All-Rookie recognition.

Although the 2014 WNBA All-Rookie selections went pretty much as most of us here at Swish Appeal expected, others around the women's basketball blogosphere were not so happy with the omission of Atlanta Dream guard Shoni Schimmel.

In the immediate aftermath of the announcement there was some buzz on Twitter about Schimmel being left off the team despite being the 2014 WNBA All-Star MVP and it has continued throughout the 2014 WNBA Playoffs.

During halftime of NBA TV's broadcast of Game 1 of the Western Conference Finals, both LaChina Robinson and Dennis Scott weighed in with their thoughts on Schimmel's omission saying that her role on a winning team and record-setting performances at various points in the year warranted her selection to the team. Brent Cahwee of NDNSports.com summarized those accomplishments on the court and added the impact that she had off the court, which made her among the biggest rookie celebrities that the WNBA has ever seen. Jeremy Wahman of Cardinal Sports Zone was even more adamant about her omission: "Just when you thought the WNBA couldn't lose any more credibility they released the 2014 All-Rookie Team." D'Joumbarey A. Moreau of FanSided, not referring specifically to her All-Rookie cred, wrote that Schimmel is the league's most exciting player.

And really, people have to drop the idea that Schimmel was "just an All-Star Game performer": she actually showed quite a bit more than that as not only a distributor, but also with her ability to create shots for herself off the dribble which could very well pay off later in her career. Her performance in August was better than any one month that Hartley put together. Schimmel has quite a bit of upside and I like the moderate idea that pilight has suggested of her potentially having a career similar to that of Kara Lawson - Schimmel has demonstrated the tools to put together a solid career in the future. She could become a better player and her skillset actually gives her quite a high ceiling. 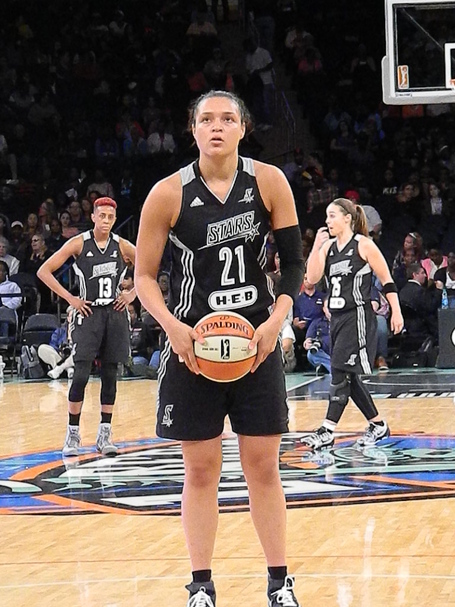 Announced on August 28, the following players were selected for the 2014 WNBA All-Rookie team (link above to full breakdown, names below linked to previous Swish Appeal analyses):

But for all of the talk about how she was snubbed, there was far less about who she should replace on the All-Rookie team.

We could debate whether she should be on the team over Alyssa Thomas, who started on a last place team and has a glaring flaw of her own, but efficiency has to come into play there and Thomas' potential as a combo forward who can offer something on both ends is hard to ignore. So going by position or statistics, the obvious candidate would be Washington Mystics guard Bria Hartley, who was also inconsistent and inefficient. And the only real way to make an argument for putting Schimmel on the All-Rookie team would be to argue that she has more upside than Hartley and that's not nearly as unreasonable as some WNBA fans make it seem (and part of what led to 5000+ words on the two rookie guards being published on the site last week).

On the other hand, Hartley had the more productive year by almost any measure - she was a starter who earned more minutes and had a solid role on a playoff team. She wasn't bad at any one thing and wasn't really great at any one thing either. But the fact of earning minutes on a team that overachieved probably should be seen as impressive. The problem is that it's hard to see where Hartley's ceiling is and the fact that she didn't really have a major strength is reason to believe it's not quite as high.

And after 34 games, it's just not possible to say definitively whether a player will make it - we have far too many examples just in the 2014 season alone to make a hard line stance reasonable (e.g. Most Improved Player Skylar Diggins, Sixth Woman of the Year Allie Quigley, maybe even Defensive Player of the Year Brittney Griner for those that decided she was a bust last year).

We've already said plenty about Hartley (ALBERT!) and Schimmel (/averts gaze) this season, but I'll leave this discussion like this:  I had no complaints about the 2014 All-Rookie team, but I definitely think that Schimmel would be on my (hypothetical) second team along with Washington Mystics center Stefanie Dolson (for reasons I've described previously). And having come up with two of five honorable mentions, I came up with three more who deserve credit for what they accomplished in the first seasons.

(Links in the names go to their Basketball-Reference statistics)

As a solid mid-major draft prospect who was drafted in the third round, Faulkner was a potential steal even on draft day. She not-so-quietly went about putting together one of the best rookie seasons in the league this season, proving that she was indeed the best value pick of the 2014 draft.

The story of Faulkner's season is fascinating in that she was far better as a starter than she was a bench player. And it shows up across the board, but most clearly in her efficiency as a distributor where she was able to use her quickness to penetrate and create scoring opportunities for others. No game was a better illustration of that then the very first start of her career in place of Courtney Vandersloot against the L.A. Sparks on July 1 in which she had a career-high 27 points, which ended up being a defining moment for what she can become at her best:  a lightning quick scoring guard who is able to take advantage of switches out of pick-and-rolls with her speed despite shooting being something of a weakness for her.

Once Vandersloot returned, Faulkner was reduced to only a minor role: she saw less minutes in the first two rounds of the playoffs (19) than she did in that one game against L.A. (27). But she showed plenty of promise in her first season and it will be interesting to see how Pokey Chatman uses her in the future.

Pat Friday has discussed Anna Cruz's value to the Liberty all season and I'm inclined to agree with most of what he has already written, which means I won't spend too much more time on her:

The problem? Cruz was extremely turnover-prone for a starting point guard, finishing the season with a turnover percentage of 22%, according to Basketball-Reference. At 27-years-old, the question is simply how much more improvement she'll make.

Similar to Cruz, choosing between Damiris Dantas and Indiana Fever rookie Natasha Howard comes down to your assessment on who will improve more on the future -- judging them on the basis of their rookie numbers is not by any means easy.

Both opened the season as starters for their respective teams in place of an All-Star forward.

Although Dantas was a low-usage, high-efficiency, mediocre rebounding forward, Natasha Howard was a high-usage, low-efficiency strong rebounding forward. Dantas was a much more efficient passer; Howard was a much better shot blocker. In both cases, their efficiency didn't drop significantly in their areas of strength even as their minutes did - for the most part, their contributions to their respective teams was consistent.

So which do you choose?

Dantas' scoring efficiency -- even as a low-usage player -- is actually what stands out most when comparing the two. Being inefficient at a high usage rate is usually a sign that a player has hit their ceiling. There is an inverse relationship between usage and scoring efficiency meaning Howard's usage will probably have to decrease in order for her to become a valuable contributor to a good team; Dantas still has some room to become a contributor who scores more than she did in her first year while also showing signs of potential as a post facilitator who can pass the ball and hold her own on the boards.

We could go further, but given that Dantas (21) is also younger than Howard (23) and these are two similarly productive players otherwise, the fact that the former has a lot more room for growth makes her rookie season a bit more impressive.