The San Antonio Spurs' hire of Becky Hammon is historic on its own, but a broader trend in recent NBA coaching hires might hold promise for more women being considered for jobs in the future.

Share All sharing options for: Becky Hammon, the San Antonio Spurs, and the NBA's coaching revolution

The San Antonio Spurs' hire of WNBA star Becky Hammon as the league's first female full-time assistant coach was probably, in hindsight, as predictable as it was historic.

Hammon's well-publicized "internship" with the Spurs this past NBA season while she was recovering from an ACL injury was a more formal extension of years of relationship building within the organization. It was already assumed that she would go into coaching upon announcing her retirement. The Spurs have a history of promoting players to assistants. The Spurs had a coaching vacancy right as Hammon's career was coming to an end, which she had essentially already been groomed for given the high praise that Spurs coach Gregg Popovich has given her.

With Becky Hammon recently announcing her retirement, we look back on her Hall of Fame career in the WNBA.

Becky Hammon will go down as arguably the best shooter in WNBA history, but few players have the ability to use their threat as a scorer to set up others as efficiently as Hammon could when she was at her best.

So there's no mistaking this for a publicity stunt - this is a basketball decision and Hammon was a qualified, though unprecedented, candidate for the job due to a combination of her familiarity with the team and her basketball IQ. But none of that makes the hire any less of an historic milestone: in addition to her qualifications, Hammon is still the first woman to be paid as an assistant in a male-dominated sports world in the broader context of a society in which there's a very real gender pay gap. Pushing that latter point further, that she could end up making a higher salary as a NBA assistant coach than she ever did as one of the WNBA's Top 15 Players of All-Time might call increased attention to complex tangle of reasons why women's basketball has struggled to become profitable.

The very fact that Hammon might never have gotten the recognition she deserves as a player from the mainstream sports world without carving out a new path for women in the NBA might be deserving of a commentary of its own. Even before yesterday's news, Hammon already occupied a unique position in basketball history as a 5-foot-6 player who will finish her career in the top five in WNBA history in assists but led her team to the 2008 WNBA Finals as one of the league's highest volume scorers. Setting aside the narrative of perseverance as the league's best undrafted player ever, Hammon-the-player defies comparison in the spectrum of basketball styles whether you're looking at the NBA or WNBA - there won't be another Becky Hammon and comparing anyone to her in the future would be unfair.

Individually, becoming the first full-time female assistant coach in the NBA guarantees not only increased visibility for women in sports but also a more mainstream examination of Hammon's achievements on the court that have been otherwise overlooked as the league has searched for younger WNBA "saviors" like Candace Parker, Maya Moore, and Brittney Griner. But as with many groundbreaking historical figures, the broader context of this hiring might be as interesting as the individual implications. 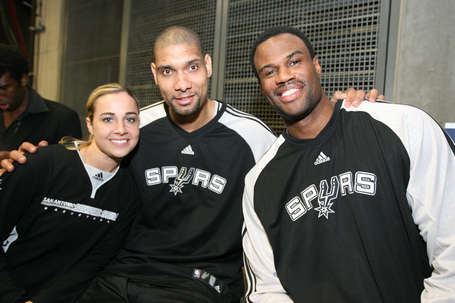 To fully understand the significance of this moment requires a full appreciation for what the Spurs mean to the basketball world: they weren't only the best team in the NBA this past season, but almost unquestionably the best of this century and arguably one of the greatest dynasties in basketball history. And although Cyd Ziegler of SB Nation's Outsports raises a good point about the possibility of a disproportionate amount of credit going to the Spurs' organization at the expense of crediting the work Hammon put in to get to this point, it's hard to separate the significance of this hire from the widespread belief that the Spurs are the gold standard in basketball on and off the court.

As SB Nation's Paul Flannery has already described well, part of the Spurs' blueprint for success comes down to luck - they won the 1997 NBA Draft lottery and future Hall of Famer Tim Duncan just fell into their laps. But that doesn't make their model of success any less desirable to their competitors - it doesn't stop other teams from poaching their front office and bench personnel, disciples like new Golden State Warriors coach Steve Kerr tying to implement aspects of their offensive philosophy, or fans wishing that their team could identify and develop talent even half as well.

The Spurs are the organization that nobody can truly emulate but everyone wants to imitate. And that means that the instant credibility that comes as part of being a member of the Spurs organization will now be bestowed not only upon Hammon but also on the very idea that women can coach men at the highest level of basketball. That doesn't mean that teams are going to suddenly start hiring women just because the Spurs did (though it is funny to imagine NBA fans clamoring for their team to acquire a WNBA franchise to develop coaching talent as the next step toward a title). But, justified or not, the public vote of confidence that Hammon has received from basketball's royalty could very well add credibility to the idea that this hire is something more than a gimmick in a way that wouldn't come with joining a perennial bottom-feeder.

And as much as the combination of Hammon's basketball legacy with the Spurs' built-in credibility already makes this a huge step forward for women, the timing of this hire might also be relevant in finding a path for women in the future due to another recent development in the NBA that could yield interesting results.

The last few years have seen a number of NBA franchises opting for head coaches without prior coaching experience. Just this current offseason, two ex-players were hired as head coaches with no previous coaching experience at any level: Kerr with the Warriors and recently-retired Derek Fisher with the New York Knicks. David Blatt was also hired away from Israel's Maccabi Tel-Aviv to lead LeBron James and the Cleveland Cavaliers despite no previous NBA experience, a rarity in being hired directly from Europe. Kerr replaced Mark Jackson, who was one of two former players coaching in the league last season without any coaching experience prior to their current job (Jason Kidd was the other). And after the Warriors fired Jackson, SB Nation's Tom Ziller noted that, "Going into next season, the five Pacific coaches will have a combined three seasons of experience with their current teams. That's straight-up lunacy."

It is lunacy - there's something happening here and what it is ain't exactly clear. Yet one thing is for certain: retreads are out and teams were starting to think further and further outside the box even before the Spurs made Hammon the first woman as a full-time assistant (alongside a European hire of their own in Ettore Messina).

Eric Koreen of Toronto's National Post placed Boston Celtics coach Brad Stevens, who entered the NBA straight from his wildly successful tenure at Butler University, at the forefront of this new "revolution" in which, "The newcomers seem more malleable to the thoughts of their bosses than the men they replaced." Taken at face value, it's a renewed emphasis on alignment between the front office executives and the coaching staff; the most cynical Warriors fans consider it a move toward finding yes-men to carry out a pre-defined philosophy in a menial middle-manager role. Regardless of how you see it, what people are looking for now is great communicators, specifically the ability to facilitate the process bringing data-driven basketball visions to fruition.

As Flannery described after Stevens' introductory press conference, these newcomers are charged with, "...communicating the data to players so they buy into what he wants on the court" - they're more of a bridge between the front offices driven by analytics (both quantitative and increasingly sophisticated qualitative data) and the players who have spent their lives refining the craft of playing the game. The Celtics aren't the only franchise moving in this direction - both the Warriors' commitment to the charismatic style of Jackson and the turbulent transition to the more collaborative disposition of Kerr reflects a very similar philosophy - but Stevens became the face of the revolution due to his ready embrace of statistics.

The Spurs, of course, are not merely following a trend - they have a culture that Hammon fits perfectly and this hire was something they've been deliberately preparing for over at least the last year. But as the trendsetters of a NBA world what the Spurs do matters. And in the early stages of a "coaching revolution" that is moving away from the antiquated notion of the authoritarian coach and toward a new breed of coach that is expected to translate the intricacies of complex analytics into basketball instructions, the candidate pool for NBA coaches has expanded worldwide to find a different kind of talent. And the question that's worth asking now is why shouldn't more women be considered for NBA coaching roles in the midst of this coaching revolution? Why shouldn't we imagine more women with high basketball IQs doing the job of translating analytics into basketball terminology that players can understand? 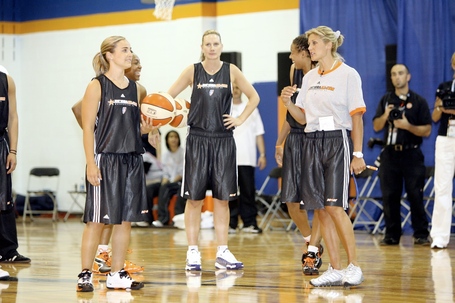 Although Hammon is a first, women have quietly been finding spaces within the NBA world for at least a decade.

Much has been made over the last 24 hours about the role that Lisa Boyer played with the 2001-02 Cleveland Cavaliers. Just last week, Michele Roberts was named the first executive director for the NBA Players Association. Women's basketball legend Nancy Lieberman was the head coach the NBA D-League's Texas Legends for a season, leading them to a 24-26 record - not spectacular, but nothing worthy of derision.

Before any of them, Stephanie Ready became the first full-time female coach of any men's professional basketball team as an assistant for the D-League's now-defunct Greenville Grove. Current Seattle Storm assistant Jenny Boucek worked closely with the former Seattle Sonics before they were stolen relocated and has built relationships throughout the NBA's coaching fraternity. Natalie Nakase is an assistant video coordinator for the Los Angeles Clippers who served as an assistant for the franchise's Las Vegas Summer League team just this summer, making her the more visible favorite to assume the role of first female full-time assistant before the Spurs hired Hammon.

Although the NBA still has some growing to do in terms of problems with women off the court that rival the NFL's, Hammon's hiring is the culmination of all of that steady progress from the D-League to the "big league" - sooner or later, this was bound to happen, whether it was Hammon, Nakase, or someone else "investing their time, energy, and effort" in relative obscurity. Yet Becky Hammon joining the Spurs' coaching staff at this particular moment in NBA history might be a tipping point in a way that those others weren't - a fusion of horizons of sorts that might not fully normalize women in the NBA coaching ranks for some time, but will make it easier for people to imagine them among the pool of candidates.

Click here for more reactions to Hammon's hire from around the web.