Who's the WNBA's most underrated player?

As the all-star game approaches, here's a look into what players are extremely vital to their team's success but may not get as much press.

Share All sharing options for: Who's the WNBA's most underrated player?

Today we take a look at some of the WNBA's most underrated players.

The criteria for players to be considered "underrated" for the sake of this article are as follows:

I'm also trying to stay away from rookies in this spot as well as they have yet to establish a basis on which to compare their games in the professional ranks.

So to gather up candidates, the following is a team-by-team look at the league's most underrated players with teams listed in alphabetical order independent of conference affiliation.

In her first full season as a starter, Hayes has seen a jump in her shooting percentages, both from the field and three, and has also been vital to the Dream's continued success as a defensive unit. Hayes has long had a solid chemistry with McCoughtry - which doesn't seem too common - and she always plays with the heart and determination that we've come to expect of players from a Geno Auriemma coached UConn team. What has also been key is that Hayes is currently averaging career-lows in fouls and turnovers, leaving all-the-more reason for Cooper to leave her on the floor.

The obvious selection here is Jessica Breland here but I think she will garner a spot on the all-star team this year and that would eliminate her based on the listed criteria. Young on the other hand, has been Pokey Chatman's old reliable this season.

She has started in the absence of starting shooting guard Epiphanny Prince, starting small forward Elena Delle Donne and has even played some minutes at the power forward this season as Gennifer Brandon hasn't shown well enough to garner valuable minutes. Averaging a career-high in minutes and rebounds illustrates that Young has embraced her role as a defensive stopper and is doing a solid job of making open shots.

This shouldn't come as a surprise because Bentley was the best guard on her team a lot of times on an Atlanta Dream squad that went to the WNBA Finals last year. This season, Bentley sets the tone for this Sun squad as the leading assister and three-point shooter. Their 6-game winning streak also happened to coincide with the best stretch of her young WNBA career.

If the Sun commit to Bentley as their starting point guard, they'll be in good hands. She still has yet to meet a shot she doesn't like but that maturity will come; not to mention it's easy to pass the ball when you have multiple all-stars on a team as opposed to one shell of one (at least until Chiney gets her first nod this season.)

It dawned on me watching the Fever take on my beloved Phoenix Mercury: Indiana's demeanor changes when Christmas comes onto the floor. She plays EVERY SINGLE PLAY like it's her last and doesn't believe in a dead-ball and playing for a no-nonsense coach like Lin Dunn, the Fever players know they have to match that effort if they want to stay on the floor.

Christmas defends hard and takes shots that are within her arsenal. Factor in that she's shooting a career-high from three this season, Christmas may have finally found a home after bouncing around with three teams in her first two seasons.

Now this was probably one of the easier choices on the day. Lavender has forced her way into the starting lineup for a disappointing Los Angeles Sparks team as she's really been this team's metronome all season. Lavender's probably best catching and knocking down the mid-range jumper but she also has solid moves on the low block, shoots a solid percentage for a big and does a good job on the boards.

This season was going to be key for Lavender as she begins to turn that corner where LA is either going to have to start her or move her. She is a starting caliber player in this league and as one of the top scorers and rebounders in the Euroleague, Lavender is fully ready to take the next step.

Coming into this season, the Lynx were in desperate need of someone to fill the backup point guard spot and that became even more evident when Swiss Army Knife Monica Wright went under the knife and missed time early. The Lindsey Moore era ended quietly and the Lynx have now given former Washington Mystics and St John's (hey Queenie!) point guard Nadirah McKenith. What did they do in-betwixt time? Enter Tan White.

After years of playing middling basketball between Indiana and Connecticut, White jumped at the opportunity to join the team that's made 3 consecutive WNBA finals. Handling the ball way more than she had in her past (White was quoted as saying that playing the point guard position caused her skin to crawl) White is averaging a career-low in turnovers while also getting her shooting back above 40% for only the second time in her career.

Let's imagine where the Liberty would be had they given up on Montgomery as she was a bit slow to adjust to playing in the WNBA....considering their current position at the bottom of the Eastern Conference, that's a scary thought.

Montgomery is EASILY shooting career highs from both the field and three and has really been a spark early for the Liberty when they struggle out of the gate in games. Essence Carson is struggling to return from her torn ACL, and Montgomery has fullen shown that she's got the chutzpah to be a starter in this league.

Since entering the starting lineup 6 games ago, Montgomery has upped her scoring to 8.3 points per night, grabbing 5.5 boards an outing and has only turned the ball over 5 times. Not too shabby Alexandria.

I have talked about Candice Dupree being overlooked for a very long time. Considering both Swin Cash AND Ashja Jones made the national team 2012, there's got to be a spot for "Smooth" in Rio. Granted, as the number one option in Chicago for a few years, Dupree was a perennial all-star and even made it as a rookie, but Dupree's game has grown immensely since coming to Phoenix.

This is a player that's a career 52% shooter from the field, she has never shot less than 77% percent from the free throw line and boards it at 7.2 times a night over the course of her career. Toss in the fact that she's made 26 threes in her career, you can't tell me that we can't find more room to give a player of Pree's caliber more love. I think I'll have to boycott the Olympics if she doesn't make the roster. No, seriously.

When you look at the last couple years, most of the big shots for the Stars have been released by the hands of on Jia Perkins and she's often produced.

Yet when you consider that Danielle Robinson is probably the heir apparent to Sue Bird on the national team and Becky Hammon is one of the greatest players - not to mention stories - in WNBA history, you can understand why she doesn't start for this Dan Hughes team. But since Hammon did miss last season with a torn ACL let's look at her numbers as a starter in 2013: career second best 13.9 points per night, career-high tying 39% from three and her most minutes since her career year in 2008 (where she would have been an All-Star had there been a game. But she was rewarded the next year with her only appearance.)

Perkins is currently out injured for the Stars and I'll definitely be watching closely to see how they fare.

I mean was there really another choice? Coming off her career high 31 points, Little was finally able to have a game that she completely put her stamp on.

Little's career arc could be completely different if she wasn't such a good teammate. It's never been about scoring for her, she's long guarded the best of the best post players in the WNBA and never heard a peep. She's improved her jumpshot over the years (she made a career high 13 last season and has already made 14 this season) and is now a knock-down free throw shooter.

Another underrated portion of Little's game? If we tracked the hockey or screen assists, Little would be amongst the career leaders already, just 7 years into what I hope is a long prosperous career.

Paris has my vote for most improved player of the year, comeback player of the year, all-star, Peak Performer award and heck, throw a vote in for her as the MVP. With all the noise about the immensely talented but equally mercurial Liz Cambage over the last few years, the player to benefit the most has been Paris.

I've long been a fan of Paris and was frustrated with her initial response entering the WNBA. There are plenty of players around the world that are making plenty of money just doing what they do well. Paris was told and even tried to step outside of her comfort zone but what's always made Paris special is exactly the things people were trying to change. The one thing that did have to improve: her conditioning, has and she's much better for it. From waiver-wire to WNBA's leading rebounder, something I told Debbie Antonelli would happen by the way. 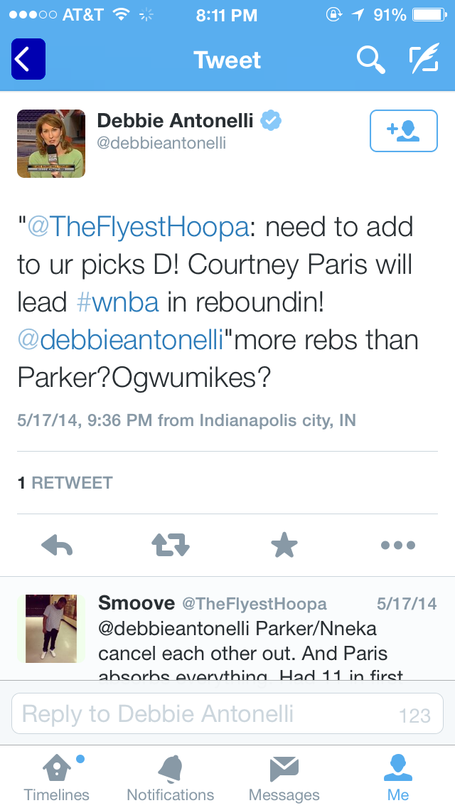 Even with her having a "down year" (her numbers are fairly close to her career numbers) Latta continues to set the tone for this Mystics team. She was able to lead the surge towards me retiring the "Mystakes" moniker that I tied to the team during the Trudi Lacey era and was rewarded with an all-star bid.

Latta is still a lethal shooter from the time she walks into the gym and her crossover is like a bottle of fine wine: it just keeps getting better as the years pass. Latta finally seems to be enjoying playing again and Thibault loves the fact that after her first season as an assistant coach at her alma mater, she is literally an extension of a coach on the floor. She's a great mentor for Bria Hartley as she knows a side of the business that Hartley will want to avoid and can point her in the right direction.

Please do me a favor and drop a vote into the poll so that we can see who YOU think is the most underrated player in the WNBA. And if you feel I missed someone, feel free to drop a detailed comment or better yet: put it in a FanPost!