WNBA statistics: How have the Tulsa Shock managed to win four straight?

The Tulsa Shock have won four consecutive games for the first time since their relocation from Detroit. So what's going well for them? Today we look at their early-season statistics, which suggest their sudden surge is about more of a team effort than merely Skylar Diggins and Courtney Paris playing well this season.

Share All sharing options for: WNBA statistics: How have the Tulsa Shock managed to win four straight?

After an 0-5 start to the 2014 WNBA season, the Tulsa Shock have won four straight and appear to have figured something out.

In a feature published here at Swish Appeal earlier this morning, Chuck Chaney described new coach Fred Williams' impact on the team while highlighting the growth of 2013 lottery pick Skylar Diggins and veteran center Courtney Paris. To summarize a key point from the article, even while they were struggling to an 0-5 start to the season the players were feeling a shift in culture that promised good things to come. The fruits of Williams' efforts to change the culture just finally started to manifest in the form of wins over the past four games.

And small sample size notwithstanding, the numbers make it clear that this isn't just a matter of the Shock's fortunes changing - they're actually playing much better basketball over the past four games and the numbers help to put in perspective just how much they've improved.

Efficiency differentials for the WNBA

Two weeks ago when we looked at the league's offensive and defensive efficiency ratings through about five games, Tulsa was second to last in efficiency differential with a below average offense and defense.

After winning four straight, the Shock have ascended to the top of the league - they're not just beating up on opponents playing poorly or getting the right bounces but legitimately playing better basketball.

Offensive and defensive efficiency ratings for the WNBA as of June 16, 2014 (via Basketball-Reference).

For the Shock to go from a -8.5 differential to a +1.1 differential over four games is pretty astounding, if only a sign of how radically things can change when the sample sizes are this small. However, to those that might simply dismiss any notion of sustainable improvement due to small sample size, consider the example of the Connecticut Sun: the Sun have also won four straight games after a poor start and haven't skyrocketed to above average levels in quite the way the Shock have.

So what specifically has gone so well for the Shock over these past four games? A closer look at the statistics suggest that their performance of late is not only sustainable but really could be just the beginning of something special.

Through the first five games, Sims averaged 25 minutes per game. During this four-game winning streak, that has increased to 35.75 minutes per game. Part of that is certainly due to Riquna Williams missing two and a half games due to injury, but it's no accident that the Shock are finding themselves in good shape with Sims on the floor more often.

Despite struggling to actually make shots (30.8% FG%), Sims shot twice as many shots in the last four games as she did in the first five - she has gone from about an average usage (20%) to the second-highest usage on the team (23.3%). Although some might scoff at her inefficiency, that ability to just create shots represents one of the biggest keys to the Shock's recent success: Sims is able to beat most opposing defenders off the dribble with ease, which allows her to get into the paint to create shots. And they're not shy about setting up Sims for pick and rolls: already able to beat most defenders without the help of a screen, Sims can use the screen, reject the screen, or split poorly organized defenders. Williams is apparently well-aware of this and isn't bashful about giving Sims he ball over and over to allow her to tear up defenses 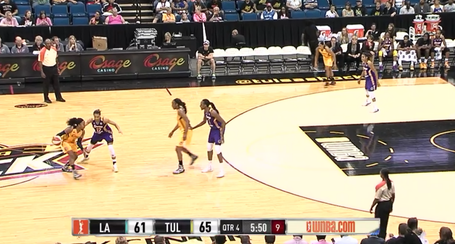 Odyssey Sims' high pick and roll with Glory Johnson against the L.A. Sparks on 6/13/14.

The Sparks tried just about every healthy guard on Sims - including highly-regarded defender Armintie Herrington - and nobody could stop her from turning the corner whether out of high screens or pick and rolls. When she does turn the corner, the defense is forced to direct more attention to her which opens up the offense for shooters like rookie Jordan Hooper or posts in pick and roll situations.

Odyssey Sims using a high screen from Courtney Paris against the L.A. Sparks on 6/13/14.

They're setting these screens for Sims rather high, but you can see how this works: once Sims beats those two defenders at the top of the key, someone has to come over the help or let her shoot. In this situation, Candace Parker had to leave Hooper open in the corner but wasn't able to rotate over before Sims got into the paint for a make-able runner.

Yes, Sims went 3-for-19 against the Sparks - and probably should've kicked out to Hooper after getting into the paint on this play - but most of those shots came out of called isolation plays in which Sims was able to get by her defender with ease, which has created all kinds of problems for opponents.

2. The Diggins-Sims combination has been hard to stop

While Sims has shown a natural ability to get shots off the dribble in her rookie year, Diggins has not only improved in that area in her second year but is also making shots at a very efficient rate in her second year (48% FG%). That makes Shock basketball rather simple this year: give opponents a steady diet of pick and roll with either Diggins or Sims. What makes it difficult to scheme for is that with the two players alternating lead ball handling duties, the Shock can easily swing the ball around to pick on the weaker defender to find shots.

Right now, both Diggins and Sims have been outstanding at using the pick and roll to create shots and while Diggins has been getting to the free throw line at a healthy rate of 33.3% all season, Sims has increased her free throw rate to 28% over the last four games.

3. The Shock are sharing the ball extremely well

Although Sims has not been rather inefficient as a scorer, she has been extremely efficient as a distributor over the last four games.

After registering a negative pure point rating in her first five games (19 assists to 11 turnovers, PPR: -1.24), Sims has been distributing at an elite level over the last four (17 assists to 5 turnovers, PPR: 4.42). With Diggins being an efficient distributor all season (PPR: 5.37), the duo is rather difficult to stop whether they're on the floor together or splitting time: they're either getting into the paint for shots, getting to the line, or creating for others.

Yet it's worth noting that with those two leading the way as distributors, the whole team has been sharing the ball more efficiently: their turnover rate as a team has dropped 7% in these last four games. Part of that is certainly Sims coming in the game and creating more shots instead of allowing the defense to create turnovers, but it has helped tremendously while the team has struggled with its scoring efficiency.

And yet the turnovers aren't even the most significant factor on a team level.

4. The Shock are dominating the boards

Two weeks ago when I took a few notes (that went unpublished) on what the Shock could do to improve, one of the things that seemed to stand out is that small ball was really working for them: during their big runs, lineups with Hooper at the four (or really in the game at all) or stretch-five Theresa Plaissance (not small, but a shooting threat to stretch the defense) were on the floor.

That wasn't surprising because it gave their guards room to make plays, but also because they weren't exactly out-rebounding anyone anyway - essentially, small ball appeared to be working because their bigs weren't all that effective against opposing bigs.

Well, one of the things that leaps off the spreadsheet about Tulsa's performance over the past four games is that their offensive rebounding rate has improved by 10% while their opponent's rate has remained unchanged.

Tulsa's Four Factors splits in their wins and losses through 6/16/14.

We've already mentioned the turnovers, but that jump in rebounding is huge - not only does it kill the notion that they should go small, but it also gives them another advantage over opponents that helps them fight through poor shooting nights.

And about half of that rebounding change can be explained by the performance of one player: 2013 All-Star forward Glory Johnson.

After being one of the top offensive rebounders in the league last season (12.3% offensive rebounding percentage), Johnson began this season as essentially a non-factor on the boards (5.5% through five games). During this four game win streak, she has gotten more than twice as many offensive rebounds (15) than she did through the first five (7). Other players have improved on the rebounding front as well - Paris and Jen Lacy stand out as improving their numbers - but none is bigger than Johnson.

With Johnson and Paris dominating the boards, the idea of giving Diggins and Sims the green light to shoot as often as they want in the paint is suddenly more palatable: when you're rebounding that well, a missed shot creates a good number of secondary scoring opportunities. In fact, the Shock might be a good case study for the value of the "Kobe assist", the idea that some portion of missed shots from a high-volume shooter are actually valuable because they draw so much attention from the defense that they free up others for second chance scoring opportunities.

When considering whether this performance over the 4-0 period is sustainable, the combination of offensive rebounding and the fact that Sims still isn't efficient actually bodes extremely well: in the worst case scenario in which Sims continues shooting in the 30% range, the teams offensive rebounding ability will help carry them as long as Diggins and Sims can break down defenses. But if Sims ever finds her shooting touch this season and the team as a whole starts shooting even at league average from the three point line, it's not unfathomable to imagine this team getting better.

Of course, keeping the winning streak alive is a more complex story: as we've seen so far this season, even the most dominant team in the league over the last three seasons can go from undefeated to a four-game losing three of four games. And, yes, it definitely matters that all four of these Shock wins were at home, the final three against teams still trying to solidify their identity as the three teams at the bottom of the league's standings. But the Shock have unquestionably developed a winning identity around two young guards with bright futures and a pair of dominant rebounding posts who can clean up their misses.

It's not always pretty - and some of these numbers will regress to normal - but it has certainly been effective for a stretch and is a promising way forward in its simplicity.