2014 WNBA Draft: Chicago, Tulsa got the most out of their draft selections

Normally at this time of the week, we'll take a statistical look ahead at one of the league's end-of-season awards races. Obviously, it's a little early for that. So for this week I'm going to follow up on something I did during the offseason: looking at which rookies made rosters and which teams did especially well identifying roster-worthy talent in the 2014 WNBA Draft.

Share All sharing options for: 2014 WNBA Draft: Chicago, Tulsa got the most out of their draft selections

Before, during, and after any draft in just about any pro sport, there's a ton of talk about past accomplishments, "upside", and which teams got value picks.

Of course, the only way to truly measure the value of a draft selection is to wait until they actually play on an actual court in an actual game (preferably more than one) that counts for something hopefully for a season (or more) - everything else is speculation, preferably educated, at best.

Yet given the WNBA's roster limitations, the simplest way to evaluate the quality of a draft on opening day is to simply look back at who actually made a roster - making a roster in the season immediately following a draft and remaining on the roster for a full season has been difficult on its own making the opening day cut a good starting point.

Love Women's Basketball had a highly usable table of opening day rosters for your perusal. But pilight gave us the information we want to know here, compiling this season's opening day rookie numbers and posting them in a fanpost here at Swish Appeal: 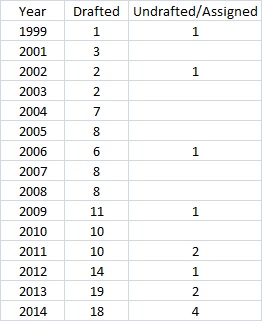 We can't read too much into comparisons between 2014 and past years in that table because obviously some players drop off as time goes on - during the 11-player roster era, a draft that produces even 12 players on rosters three years down the road would be considered a pretty strong draft.

Yet what we can see about 2014, at least preliminarily, is who drafted well: who got the most out of their draft picks in terms of selecting players that were actually able to make their roster?

Breakdown of how each team's draft selections fared

A lot of general managers give lip service to the notion that it's not about the general value of a draft prospect, but how well they fit the roster before selecting players that they realize aren't fit for the roster when it comes to making final cuts.

The reason I'm including undrafted (and international) rookies on this list as well is pretty simple: general managers go through a general scouting process (around the world) and have to make choices about how to use assets, whether it be "spending" a draft pick on a college player or spending cap room on an international player. Bringing in an undrafted rookie who successfully makes a roster is no less a credit to good scouting, which is essentially what's being evaluated here.

This is more for me as I continue to track the performance of draft prospects to see what types of players are making rosters, but here are some preliminary surface level thoughts.

It has been a few years since a team with three or more picks has kept every one of them for the entire season (2011 San Antonio Silver Stars), but the Shock are one team that could end up doing it this season.

Odyssey Sims might not have been a "no-brainer" in that there was at least one other possibility that many fans expected them to consider, but it wasn't exactly a difficult pick either. Second-round pick Jordan Hooper and third-round pick Theresa Plaisance were obviously good fits for their roster the moment they were drafted; Hooper has gotten some early unproductive run while Plaisance is still trying to work her way into the rotation. But you can see, in theory, where they'd help that roster: with the somewhat awkward combination of Sims, Skylar Diggins, and Riquna WIlliams on the perimeter, having post options who might be able to spread the defense out and create space for driving lanes is a great idea.

As rare as it is for someone to make so many successful draft selections, it's hardly surprising that all three made Tulsa's roster.

Whereas the Shock got players who looked like obvious fits on draft day, there was definitely some question about whether more than one of the Sky's picks would catch on – that three did is a surprise.

Ironically, third round pick Jamierra Faulkner might have made the biggest impact of their draft selections so far as she was credited with helping the team win their first game of the season. First round pick Markeisha Gatling is giving them a reserve post presence in Sylvia Fowles' absence and the strength she used to muscle opposing post defenders in college is already showing up in WNBA games – the biggest problem for her is foul trouble and the fact that her teammates aren't getting her the ball when she establishes herself within five feet of the rim. And second round draft pick Gennifer Brandon is getting spot minutes at the end of quarters and has yet to bring her impressive leaping ability to bear on the boxscore.

What remains to be seen is whether all three of the Sky's players will stick around for the season once All-Stars Sylvia Fowles and Epiphanny Prince return, thus crowding the rotation a bit. And that's not to mention that they also signed lightning quick undrafted scoring guard Aaryn Ellenberg, who has yet to play but might have been a better pro prospect than some players drafted ahead of her to begin with. Nonetheless, finding four rookies to make the roster of a playoff team in the WNBA draft is praiseworthy.

I was admittedly uncertain about Shoni Schimmel's pro potential on draft day, but there probably wasn't a better fit for her in the league than the Dream and so far she's looking like she could be the steal of the draft as the #9 pick. As already described previously, she has been absolutely outstanding for the Dream through two games and will certainly compete for a spot on the All-Rookie team.

But the Dream also deserve credit for selecting Inga Orekhova who also made their roster: her numbers at South Florida were not at all spectacular for a perimeter scoring prospect, but as a team in need of three point shooting she was a fit and she made the roster.

In contrast to the NBA's Cleveland Cavaliers who should be permanently banned for the NBA Draft Lottery for Remarkable Accomplishments in Basketball Futility, the Minnesota Lynx should be barred from acquiring any more talent through the college draft as long as they continue this march toward dynasty status - they're just too good at this.

Yes they had four picks and only kept two, but they already had Brazilian post Damiris Dantas coming in from the 2012 draft and, of course, a roster of Olympians and defending WNBA champions. That they even managed to find talent that could compete for roster spots reflects a pretty strong self-assessment and evaluation process.

Of course, spots were available because they jettisoned former lottery pick Amber Harris and 2013 rookie Sugar Rodgers before the season, but finding Asia Taylor in the third round is still noteworthy even if it wasn't entirely clear that she'd make the roster upon being drafted. Tricia Liston is just one of those players who shoots the ball so well that you figure she'll be able to find a role in a system full of scorers that opposing defenses have to account for – with the way Maya Moore is playing this season, Liston could be an asset down the road as a floor-spacer.