In a two-part interview, Michael Cooper spoke with Swish Appeal about his new job as new head coach of the Atlanta Dream. In Part II, Cooper addresses questions about the Dream's offseason and his coaching philosophy.

Yesterday we shared the first part of a recent interview with recently-hired Atlanta Dream coach Michael Cooper. Today we share the second part in which he discusses the Dream's offseason, the 2014 WNBA Draft, and the influence of his own former NBA coach in Pat Riley.

More: Part I of the Michael Cooper interview The Atlanta Dream offseason

Swish Appeal: Have you contacted any of the Atlanta Dream players or had a chance to talk to them?

Michael Cooper: I’ve talked to Jasmine and I’ve talked to Armintie. I’ve reached out to others but again, right now, I haven’t. I’m still finding out about the new things in the league – I’ve been out of the league for four years. When I was in the league four years ago, they didn’t have the defensive three seconds, I didn’t have to worry about goaltending so there are some new things I had to concentrate on. Now that that’s over, I will start reaching out and trying to contact our players overseas and maybe get a chance to go over and see some of them play.

Swish Appeal: Since no collective bargaining agreement has been signed yet, are you allowed to talk yet with Erika de Souza or Armintie Herrington about re-signing them?

Especially with the three rounds of the draft, we’ll find somebody in the second or third round that can definitely put the ball in the hoop from three. - Michael Cooper

Swish Appeal: Can you tell us if there’s a position you’re looking to improve on in the 2014 Draft? You once said that "you can never have enough bigs" but is that still true for a team with Sancho Lyttle and Erika de Souza?

Michael Cooper: Yeah, but I think another piece that’s missing might be another scorer. You’ve got Angel [McCoughtry]– and she’s a scorer, and that’s what she does well – and I don’t think we have another player like that. We have people that can put the ball in the basket, but a scorer can do that at any point in time.

Maybe a 3-ball shooter would help – someone that can really stretch the defense – but those things can be rectified through free agency. You can find somebody there, or especially with the three rounds of the draft, we’ll find somebody in the second or third round that can definitely put the ball in the hoop from three.

Swish Appeal: We know that goal #1 this year is to win Atlanta a championship. What is goal #2?

Michael Cooper: (smiles) To win another one. When you win that one, you get greedy for more, and that’s something that happened in my playing days with the Lakers. We messed around and we weren’t even trying to win a championship in 1980, and next year, we find ourselves playing in the biggest game of the NBA, and we won it. You know what? That sets the precedent for what goes on in the future.

That’s what this is about. The Dream have gotten to the finals three times. They’ve knocked on the door and it’s about getting there and it’s time not to knock any more – it’s time we kick the door in. I think if we put the pieces together, and if the players buy into my philosophy - which I have no doubt that they will - things are going to happen.

Once you get that – it’s like LeBron James says. "I want to win, one, two, three, four…." On and on! But first thing is you can’t win two without winning that first one.

Swish Appeal: Last year, Sancho Lyttle got hurt in mid-season and never returned. Despite Atlanta’s relative playoff success, her loss sent the team into a regular season swoon. Is there anything a coach can do about a player’s health, or do you just have to pray that players stay healthy?

Michael Cooper: I think the one biggest downfall we have in the league right now is that players have to go overseas to play. There’s a lot of games, the coaches over there play them a lot, the floors are bad. If there was some kind of way – which isn’t going to happen anytime soon – where they can get those players contracts up to $200,000, that would help a lot, but that isn’t going to happen.

Injuries are part of the game, and you just pray the players go over and take care of themselves, eat well, getting rest when they can so when they do come back…these four months are a short time of basketball, but it’s the most intense for them because it’s not necessarily about the dollars – they’ve made that overseas – but the fame that goes along with it. Playing in the states with your parents, friends, and loved ones being able to watch you.

We just hope that players take care of themselves, through personal trainers or however they do it. Again, we realize – and this isn’t just the Dream, this is any team in the WNBA – if your player gets injured, that’s why you have 11 players, they all have to be ready to play. If someone goes down, someone has to step up and fill that void.

Swish Appeal: What’s your schedule like in the off-season? What kinds of things do you do in a typical day?

Michael Cooper: Before, it was just being with my son and my wife and just getting away from basketball, because prior to leaving USC I had coached for eight years straight. All year around and then the summertime out scouting.

I love player development. Hopefully, as this thing progresses, and we get through the season now and next year we can persuade the players that need a little extra help of some things they can do during the off-season, to help strengthen some of their weaknesses and to enhance their strengths. To get them to stay back – and that will require working with them from Monday through Thursday, one hour, forty-five minutes a day, trying to work on their game.

The other time is spent thinking basketball, trying to see what we can do. There’s always work with the league that we can do.

Swish Appeal: You have four children – three adult children and one young child. Will we see any of your children – at any age – at Atlanta Dream games?

Michael Cooper: Oh, they’ll come! They were big fans back when I was with the Sparks back in those days – they were younger then. My oldest, Michael, is 32. My daughter is 31 and she just got married about five months ago, and they’ll be at the games – they’re stationed in El Paso. Michael, my oldest is in LA and my 23-year old son who’ll graduate at USC this spring will definitely come down.

My wife now – my second marriage – and my son will eventually come down. It will be closer to the season, but they eventually will come after he finishes school. And next year, we’ll become full-time residents of Atlanta.

Swish Appeal: Have you formed an opinion about the 2014 Draft yet? Is there any senior that you think is the best all-around player? 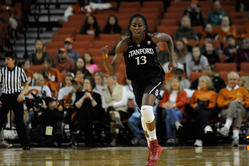 Chiney Ogwumike had some of the best numbers of any senior in the nation coming into this season, but might there be other players who challenge her as the top pick in the draft?

Michael Cooper:Well, the best all-around is hands-down - everybody knows that Chiney Ogwumike is the best player out there. What people are trying to decide is who is the second-best player. The one luxury I have now is that I’ve had a chance to see these players coming up. I saw them when they were sophomores, juniors and freshmen in some cases. I’ve got a better prospective than most coaches now going forward in the draft.

Michael Cooper: This is my first time in Atlanta, other than coming here in the WNBA with the Sparks or playing in the NBA. I think my other closest time is that Norm Nixon is from Macon, and he used to talk about it, so there were a couple of times in 1988, 1989, I would come down and spend a couple of days with him, with his grandmother and his family.

Swish Appeal: In a previous interview, you mentioned Jerome, your alter-ego.

Swish Appeal: You stated that Jerome was your more playful side. Does he make public appearances, or is that reserved for the players?

Michael Cooper: He’s reserved for players (laughs). Jerome is an interesting guy. He’s playful and there are times when Jerome comes, when he knows it’s needed for the team. Our season is so tight and so quick and so intense than every now and then, the players need a break mentally from the game within the game. Yeah, we have to practice but sometimes practice can be light and fun – and when Jerome appears, that definitely happens.

Swish Appeal: This is a two-parter. You’ve mentioned the influence of Pat Riley on our coaching. The first part: do you get a chance to talk to him about coaching these days? And the second part: are coaches expected to know everything at this level, or are there peers that you get advice from?

Michael Cooper: Well, I don’t talk to Coach Riley much, because he’s so busy, but when we see it each other I might hit him for some new things. A lot of my coaching philosophy has come from him, the way he’s coached us, the things that he’s done. So I take a lot from that.

But any coach that gets to this level that thinks he knows everything, he’s fooling himself in all things. That’s the fun part to me. Basketball is evolving, players are evolving, they’re getting better. Prior to me coming back, there was no Brittney Griner. Now, you’ve got to come up with a way to defend that young lady and that team. That’s the fun part to me – you’re always thinking, talking to other people, going through books, hitting other coaches up. I may even take a page from somebody else in college, call up some of those teams that played Brittney Griner and were successful, and ask, "Hey, hi coach! What did you think, how did you do this, how did you do that?"

I have no problem with reaching other coaches and asking because it’s about sharing your experience and getting it, and then seeing if you can be successful with it.

Swish Appeal: One final question: is there anything you’d like to say to the readers of Swish Appeal that we’ve not had a chance to ask you yet?

Michael Cooper: First of all – to the WNBA fans, I’m so glad to back. Back in the late 90s, 2000 they were saying that this league wouldn’t stay up. Due to the loyal fans we have, we are slowly and surely attracting that armchair NBA guy who just thinks the NBA is it – those people are transferring over. I just want to thank them for just being there with us.

I want to thank ESPN as well as all of the other magazines that are interested in women’s basketball to make it the game that is now rolling into its 18th year. It’s fun to watch, because we as young men have always had major league baseball, football, or basketball – these ladies have a vehicle where they can make themselves some pretty good money doing something they’ve grown up doing, and we get into our 20th, 22nd, 24th year as a league, we’re going to see better and better and better basketball and I just want to thank them.

For more on the Dream, visit our Atlanta Dream offseason storystream.