Taylor Lilley: Is there a place in the WNBA for an undersized sharpshooter?

Share All sharing options for: Taylor Lilley: Is there a place in the WNBA for an undersized sharpshooter? 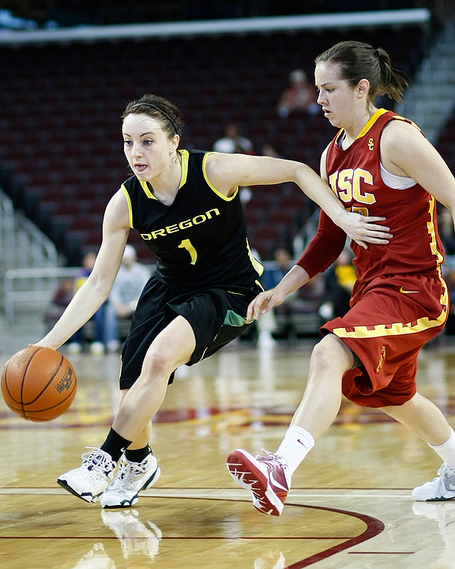 "Taylor Lilley who can hit anything, from anywhere, at any time." - FSN commentator

"Lilly is 16th overall on my list, ranking strong in Effective Field Goal %, True Shooting %, Stop % (#2 overall), Indvidual Rating and scraping in as #25 for WinScore."

There is a quickly rising sense of anticipation among the crowd at Mac Court almost anytime University of Oregon guard Taylor Lilley gets the ball, whether it be audible or in the form of fans sitting up a little straighter in their wooden nostalgically uncomfortably seats.

Regardless of whether she's coming off of a down screen, receiving the ball at the top of the key in a one-on-one situation, or leading the fast break, the assumption - perhaps even the expectation - is that she's looking to score. It doesn't really matter whether Oregon's All-Time leading three point shooter gets the ball right at the arc or at NBA range - with her quick release, she's a threat to launch the ball at almost any moment.

"I like the rims," said Lilley after a Senior Day loss to UCLA, the final conference game for the Ducks at Mac Court. "They've treated me well."

When she doesn't get the fraction of an inch to launch the ball right away and left with one on one coverage, she'll put her head down and set to work with a set of hesitations and crossover dribbles until she finds her defender off balance just enough to get the shot off or drive to the basket and kick to a teammate.

Over the course of her career at Oregon, she's established herself as one of the Pac-10's most dangerous long-range shooters. So although Lilley may not get the national recognition of other players it makes sense that she's looking forward to making a run at the WNBA.

"I'm gonna try and play WNBA as well as overseas and see where that goes," said Lilley after the loss to UCLA. "It's just all about finding an agent and then just making little steps toward getting on a team."

As much as her shooting has been a huge asset for the University of Oregon this season, her obvious shortcoming as she looks to transition to the WNBA is her 5'6" stature. After their loss to the University of Washington to end conference play, Oregon coach Paul Westhead said that her size might make it a challenge to her making a WNBA roster, but if she finds the right situation on the right team, she could make it. And of course, the mere fact of being 5'6" does not preclude making a roster, much less having success - there's a 5'6" guard in San Antonio who has been quite successful. What it ultimately comes down to, as Westhead also mentioned, is her competitive drive.

Yet even in college, there are times when her stature plays out as a barrier to utilizing her quick release. Against UCLA in the team's final conference game at Mac Court going up against UCLA's 5'10" forward Jasmine Dixon, Lilley did the usual thing of getting the ball at the top of the key off of a screen and dribbling back and forth crossing over trying to create space. Although she was eventually able to create that space and get a shot off, the taller Dixon was easily able to contest the shot and force Lilley to miss.

Once Lilley decides she's going to score with the ball in her hands, her singular focus is on scoring almost to the exclusion of all else until the option is completely eliminated. Against the taller and more athletic competition of the WNBA, it's likely that she'll have to adjust that tendency.

Although she's definitely a scoring ballhandler that handles the ball much more confidently in attack mode than in distributor mode, she actually tends to look much more comfortable shooting the ball while coming off of down screens. She he has very good shooter's footwork - when she comes off screens she can quickly get her feet set, squares up, and get off a shot before the defense catches up. If there is anything that bodes well for her going forward, it's that ability to come off screens as a catch and shoot three point threat.

Lilley's defensive footwork is often a different story. There is no reason to believe that any player can't defend, but Lilley sometimes goes flatfooted, forcing her to chase opponents that blow by her. Against UCLA in the final game at Mac Court, it was speedy freshman Mariah Williams that seemed to blow by her while the bigger and stronger Darxia Morris just seemed to get by her with a crafty move or two. In their final game of the season on the road against the University of Washington, it was more of the same at times with her head on a swivel, seemingly unsure of her assignment.

It's games like the one against UW - a team not exactly known for its speed on the perimeter -- that might prove most unsettling for Lilley's WNBA prospects. Lilley did finish with 14 points, but was quiet with 5 points on 2-4 shooting - 1-3 from beyond the arc - in the first half. When Washington guard Sami Whitcomb was asked after the game what they did to contain Lilley after being torched for 33 to open Pac-10 play in Eugene, she quipped simply, "Hands up!"

While Lilley could certainly make a roster on an uptempo team looking for a three point threat, the fact that UW was able to adjust to her means that WNBA competition would eventually do so as well. Of course, there might be an uptempo team out there that a coach with WNBA championship experience like Westhead might have prepared her pretty well for.