Share All sharing options for: Ros Gold-Onwude: "Very coachable and willing to learn" 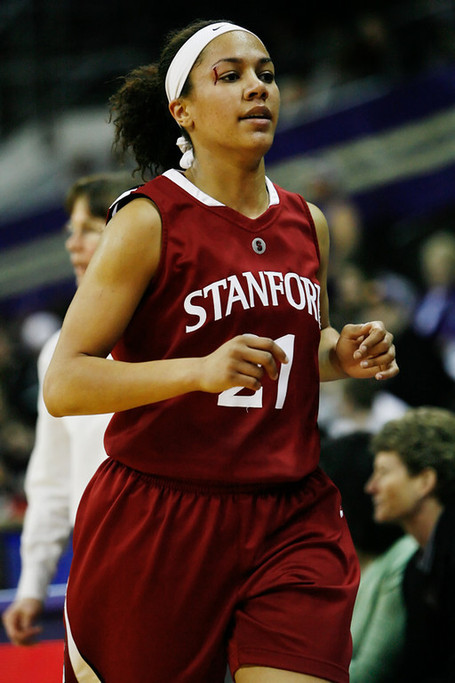 Quote from a WNBA insider:

"I think that Ros wants to play – Ros has had a great senior year. And I think that the great thing about Ros is first that she plays at such a high level for such a great program so you know Tara has exposed her to the things that are so important to being a professional player. I think good pedigree is in important – Uconn, Tennessee, Stanford, Duke – those programs prepare those kids for the next level.

She’s cerebral so she understands the game. She has a high basketball IQ. She’s a great defender and Tara relies on her quite a bit to shut down the opponents top players offensively. And she’s just done a nice job of distributing the ball and making some good decisions. So I think that she has an opportunity to be selected or go to a camp in free agency and just fight for a spot. Again, we’re always looking for players who understand the game and know their role but who continue to get better. So I think Ros has a decent chance. I selfishly would love for her to make it to the league to add to the number of Stanford players in the league."

"I don’t think there’s any defender in this Pac-10 better than Ros…She was on Ashley Corral last week and she had one point when Ros went out of the game. She had Doreena Campbell…She takes real pride in her defense and then other people because Ros gets a lot of positive reinforcement for that, other people say, ‘Hey, I can do it too.’"

-Stanford head coach Tara Vanderveer in a post-game press conference at the University of Washington.

From C and R of the Stanford Women's Basketball Blog:

"To sum it up, came in to the program primarily known as a scorer, yet had to learn a rigid offense and become a passer. Not known for her defense, but transformed herself, especially in the last two years. Very, very coachable and willing to learn, even though it went against her nature.

Learning the offensive schemes that went down to the final seconds of the shot clock was hard, yet she disciplined herself and did what was asked. She works out every off-season. When thrust into the point guard role to be a passer, she had a hard time and you could literally see her thinking too much and not pulling the trigger on passes to wide-open players. Yet she went to her coaches and asked for help, studying film and going to what she called Point Guard 101 class with head coach Tara VanDerveer. She stepped up her game in defense in the last two years.

A diva was forced to be a team player, and she did it well."

The story on Ros Gold-Onwude is simple: chances are, you won't determine her impact on a game by simply looking at the boxscore.

She was the coaches' choice for Pac-10 Defensive Player of the Year for one reason -- she's a lock-down perimeter defender and she comes out to do her job every single night.

However, that makes it hard to determine just how good she could be in the WNBA.

For every time one sees her shut down a player like Alexis Gray-Lawson, it's easy to dismiss it as simply a product of playing against one of the best post defense teams in the nation -- any perimeter player can play anyone close when a trio of Stanford trees are around to end all penetration. Conversely, the ability to play the perimeter effectively knowing when to give and take and rely on support from post players is also a valuable skill. She has that in addition to good defensive court sense and footwork, all of which could serve her well in the right defensive system at the professional level.

It's probably cliche to say that a Stanford player plays "heady basketball" offensively, but there's a reason why she ranks slightly higher in Chasing the Title's rank: she's a very efficient offensive player. As a guard playing with 2010 Pac-10 Player of the Year Nneka Ogwumike, a dominant post scorer like Jayne Appel and Nightmare versatile wing threat Kayla Pedersen, for a guard to do anything but pass the ball would seem somewhat bizarre. Despite not putting up gaudy offensive stats this season, one could argue that she has played with Stanford's system beautifully given the circumstances.

When she does get scoring opportunities -- particularly in space -- she proves to be more athletic than people might give her credit for with the ability to pull up for jumpers on the break and a steady ball-handler.

However, if the key to a successful professional career in the WNBA -- or NBA -- for that matter is the ability to do one thing well on both ends of the court, the biggest question mark for Gold-Onwude is: what will she offer a WNBA team offensively? To claim that we know that for sure watching her performance this year at Stanford would be unfounded speculation at best.