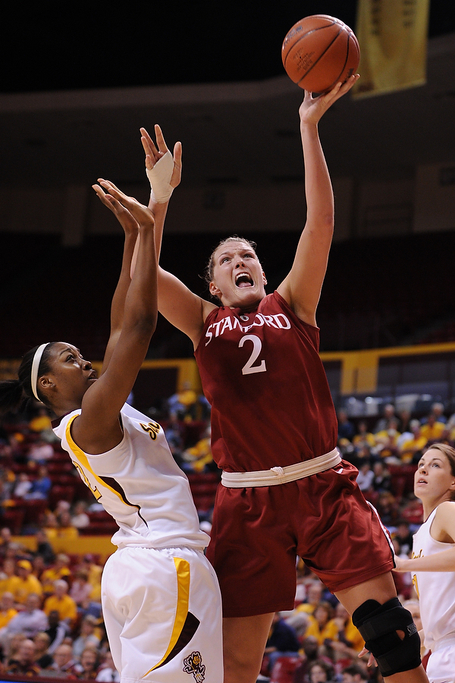 (Brief note on the ranking from Chasing the Title on March 3, 2010: Charles had one poor offensive game against Syracuse, but it appears that it was her BoxScore that dropped this week. With these two players so close in total score that was enough to have her slip under Appel for only the second time this season. Interestingly she still tops Appel on my overall list because my center ratings weight shooting lower than my overall ratings do.)

"Her strengths are in her rebounding, particularly defensive rebounding. She has the fifth best overall floor percentage of all the seniors I track. The high RPI held by Stanford based on their record and strength of schedule keeps her in the top five for both my individual rating formula and WINSCORE. The only area she shows poorly in would be True Shooting Percentage. All but two of my top ten performers maintain at least a 59% TS%, while Appel sits at 56%."

"First of all, she runs the floor very well. And when she gets on the block she uses either hand very well. I yell at her because she's too unselfish -- she loves to pass and I'm just telling her to score when she's one-on-one. And then she's a very intelligent player...She works hard defensively. She grabs the ball: that ball was kinda tipped around -- like Nneka had one out of her hands, Ros -- Jayne the ball's there, she grabs it. She rips it in. She's extremely competitive -- she's one of the most competitive people I've coached, she gets after it everyday in practice.

"I'm exceedingly proud of Jayne because she puts this team on her back -- game in, game out; practice in, practice out. She truly is being an All-American for us this year."

-- Stanford coach Tara Vanderveer on what Jayne Appel does well after a road win against the University of Washington.

From C and R of the Stanford Women's Basketball Blog:

"Her strengths, as mentioned, are her tenaciousness in scoring and rebounding down low and her passing and ability to hand out assists. Any team would welcome a big presence in the center with the vision to see the open player and the accurate passing skills to match. Jayne's soph and junior year she played the inside out game with Candice Wiggins to perfection. Jayne is also smart, smart, smart and hustles, which not a lot of centers do. She does have a weakness in her game and that is the weakness to hit a long jumper or a three. She has attempted just two three-point shots her entire career and made none. Okay, so a three is not everyone's specialty, but the inability to hit a shot just beyond the foul line is a glaring weakness that should be addressed before the start of the WNBA. It is hard to know if Jayne just does not practice a long jumper as she is best from scoring down low, or if the coaches don't put her in a position to shoot that shot because she cannot hit it. Either way, she needs to add that weapon to her arsenal."

LYNX: Jayne Appel: An In-Depth Look
When asked about what makes Jayne Appel such a great collegiate player recently, Tara Vanderveer recently commented that she’s almost too selfless to the point that she sometimes finds herself yelling at her All-American center to shoot the ball instead of passing. So when thinking about Appel’s pro prospects, that is perhaps the most telling thing her – her most immediate impact might be as a post presence that can defend and help facilitate scoring opportunities for others rather than becoming a flashy big-time scorer. She is surprisingly quick for her size on both sides of the ball and a very smart player who establishes excellent position whether that be offensively or defensively. Perhaps not as evident within Stanford’s methodical offense is her ability to fill the lanes to score or pass in transition. While she has struggled with injury throughout her career, her performance in the last two weeks as she continues to break school and Pac-10 records shows that she is returning to what everybody expects from her: an active, hard-working post presence whose game is as much about hustle as it is about skill.

Although one of her greatest assets as she develops offensively will likely be her outstanding footwork and attention to detail, she relies heavily on her strength at the college level to score around the basket and that will not come as easily to her at first in the WNBA. In addition, most of her scoring in college has come right around the basket – she has yet to show a consistent mid-range jumper, as described by the folks at the C and R Stanford Women's Basketball Blog. Appel might be an example of a player whose success ultimately depends on the situation she lands in: if she ends up on a team that expects her to seamlessly continue her dominant post-scoring in the WNBA, she will be a disappointment. However, if she lands in a situation that tempers expectations and maximizes her strengths and focus on the intangibles, she could develop into a reliable post player that anchors a rotation for years.

The things that make Appel a great prospect don't necessarily show up in the boxscore or in the college records she's set.

First, she's very good as a player in transition, either filling the lanes and running the floor or getting the pass on the block early and finding other players for assists. While her body frame leads people to assume that she's a lumbering, slow center, she beat players down the court not only with surprising open court speed but also simply recognizing the opportunities to get out and run before her defender.

The fact that Appel is so unselfish, capable of facilitating the offense of a national power from the high post, and simultaneously a physical presence that can set strong screens makes her a huge asset for any professional team interested in adding players that can set up others for scoring opportunities. That she has size, vision, and good size is certainly compelling.

However, when thinking about her role in the high post in the WNBA, she would have to become a more consistent perimeter scoring threat to really be effective. If she cannot demonstrate a strong perimeter game, defenders can sag off thus limiting her effectiveness as a passer. None of that precludes her from playing the low post and passing from that position, but the strength and quickness of professional players just means she won't be quite as dominant.

Most teams could use a skilled post player with strong footwork with the competitive drive of Appel. So the question for her draft status might be simply a matter of the team that is most attune to the intangibles that she brings.