Share All sharing options for: Alexis Gray-Lawson: Will college determination and versatility translate to pro success? 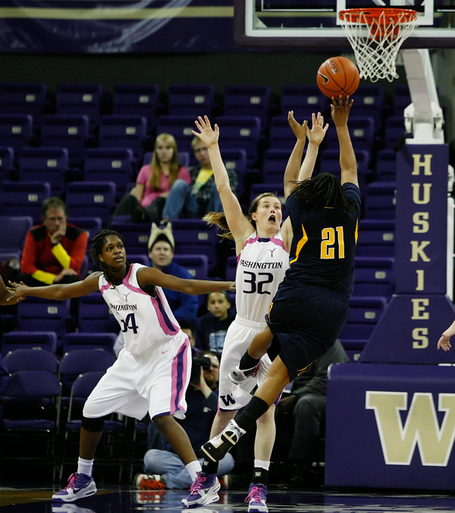 "Gray-Lawson ranks 38th overall among the seniors I track. She is in my top 20 for Floor Percentage, Offensive Rebounding Percentage and Stop Percentage. This indicates she is a relatively efficient scorer, a strong rebounder at the guard position and decent defender. She ranks eighth overall among shooting guards on my list this season."

Quote from a WNBA insider:

"I think Alexis Gray-Lawson - I watched her last year in the Pac-10 - is quite an impressive player. She can do so many things - I love the way she creates off the dribble. She's a good three point shooter. It just depends on what teams' needs are."

"I think there's no question she'll be drafted. I think first it's just a matter of which team is selecting her, but it's deep - it's a very deep draft - and it's going to go on teams' tastes."

"Lexi's been a big time player and she shows up when we need her in big games. And tonight was one of those nights where we had to have points and we weren't getting them in other ways. And she really starts to read that as the game goes on and knows when she needs to just kinda take over games.

"I don't know what went wrong. An All-American went to war, that's what happened. I think we were all there, right? The kid was unreal. She was shooting on double teams, she was shooting against a 6'4" [defender] -- it was ridiculous. So, I mean, it's tough to stop.

"It’s kinda like I remember coaching in the Final Four at Duke and Toliver shoots over Allie Bales off her back [foot] going backwards. And you could go ‘What went wrong?’ It didn’t go wrong, that kid just hit a tough shot. So there’s nothing wrong."

- University of Washington coach Tia Jackson after losing to Cal in overtime.

"I believe her biggest asset will be her versatility. There isn’t one aspect of Gray-Lawson’s game that really stands out as elite, but at the same time there aren’t any major holes in her game either. She has a consistent jump shot, good ball handling skills and excellent body control when she drives the lane. Her height and size wouldn’t indicate an ability to consistently rebound but she has good court sense and tends to get herself in the right place to come down with the ball. She’s Cal’s best, most consistent on-the-ball defender and rarely allows her assignment to get around her. She recently set a Cal record for most games started in a career, and I believe that the amount of experience she’s gained at the collegiate levels with a variety of expectations and surrounding talent from year to year have been invaluable in preparing her for the challenges of the WNBA."

Quote from C and R of the Stanford Women's Basketball Blog:

"We have only seen her once this year, but my first take is she is not playing team ball when she scores 30 or 40 points. She is a great scorer, yes, and can score from outside or drive in, but can she use her teammates wisely and set up her team for the best shot? However, to be fair, for this year, she is surrounded by freshmen and role players from last year and they might not know how to get open. Compare her assists from last year, 102, to this year, 45. If there is no one open to pass to, you can’t blame her for not passing and always taking the shot."

LYNX: Draft Central 2010 | Alexis Gray-Lawson
"Alexis Gray-Lawson’s situation in Berkeley has shifted so dramatically from year to year that it’s hard to make any single definitive statement about her collegiate career or pro potential. At no time has that been more evident on the court than the transition between her 4th and 5th seasons, as described by the folks at SBN’s California Golden Blogs whereas she was more of a distributor in her 2008-09 campaign with senior post players Ashley Walker and Devanei Hampton shouldering most of the scoring burden, in 2009-10 she was the number one scoring option surrounded by six freshmen. So perhaps this can be said about Gray-Lawson’s transformation from complementary distributor to volume scorer: she has the ability and basketball IQ to adapt her game to her team’s needs."

We might not know as much about Alexis Gray-Lawson's pro prospects as we think we know.

Her situation has been so dramatically different year to year in Berkeley that it's hard to make any solid judgment about her game or pro prospects at this point.

At no time has that been more evident on the court than the transition between her 4th and 5th seasons, as described by the folks at SBN's California Golden Blogs who have watched her as much as anyone: whereas she was more of a distributor in her 2008-09 campaign with senior post players Ashley Walker and Devanei Hampton shouldering most of the scoring burden, in 2009-10 she was the number one scoring option surrounded by six freshmen. So perhaps this can be said about Gray-Lawson's transformation from complementary distributor to volume scorer: she has the ability and basketball IQ to adapt her game to her team's needs.

However, Gray-Lawson is more than just a volume shooter: the court sense and body control that make her such a great collegiate scorer attacking the rim has also aided her in finding gaps to draw defenders and set up teammates. Furthermore, in addition to leading the Pac-10 in scoring this season, she's tenth in offensive rebounding despite her 5'8" stature.

Defensively, she's Cal's most consistent on the ball defender and routinely takes the opponent's toughest player.

People might question whether a 5'8" scorer can make it in the WNBA, but she's more well-rounded than people give her credit for and if she can adapt to running an offense at the WNBA level, she'll be a very valuable asset as a combo guard for any team. So far, there's no reason to believe she can't adapt.

It's not that there aren't 5'8" scorers in the WNBA - Betty Lennox is one. But for the most part, small scorers have to have point guard skills (Latta, Hammon), be very proficient long range shooters (Toliver). Perhaps her winning the Frances Pomeroy award -- handed out annually to college basketball's top collegian 5'8" and under -- is more reason for optimism. The award itself is of course an honor, but since the WNBA came into existence 3 of the past winners of this award are on Team USA (Becky Hammon also plays for Russia), 6 of 12 selected were WNBA starters in 2009, and 10 of 12 were contributors in the WNBA. So at the very least, Gray-Lawson is in good company on that front.

The key for Gray-Lawson might be whether she demonstrates strong point guard skills in training camp. If so, there's no reason to believe she shouldn't be on someone's roster.