The 2013 Women's Basketball Hall of Fame ceremony featured six inductees, including four former players who offered their thoughts on the moment in brief interviews.

The inductees were interviewed one-on-one by Swish Appeal and asked three questions - how did they get in the WBHOF, what did the honor mean to them and who had the greatest impact on their basketball career. Yesterday we posted the responses from the coaches and today we look at those from the players.

Peggie Gillom-Granderson: "I appreciate how far women's basketball has come."

Gillom-Granderson is the all-time leading scorer for Ole Miss with 2,486 points and was a Wade finalist in 1980. Her sister, Jennifer Gillom, was inducted into the hall in 2009.

"I don't know," she said with a big smile. "I played basketball. I played the game that I love and coached. I guess people reward you for what you did, and you don't know what you did really."

"I told my husband, ‘Oh, my gosh,' and that song, a little girl has a dream, that is the first thing I said, that little girl is me. That's my dream," Gillom-Granderson said. "I was on the (WBHOF) board the first time I heard that song and that's what I felt. That is how I still feel. I am still dreaming.

"I appreciate going to a van and eating a ham-and-cheese sandwich and an apple after the game. I appreciate how far women's basketball has come.

"I am among the best. I have been in this hall but there is something different every time. There is a different feeling. I have a letter - you know how you hide something from yourself - from Margaret Wade, a personal letter. I've got it. It's well protected. I can't find it."

Who had the greatest influence on Gillom-Granderson?

"I had a brother, George, go to school at Ole Miss," she said. "I had six brothers, and there were three older than me. George got a scholarship at Ole Miss."

Rizzotti led UConn to its first national title in 1995 and was a two-time Kodak All-American and 1996 Wade Trophy winner.

So how did Rizzotti earn her nod to the WBHOF?

"I was born in the right year," she said. "That is the best answer I can give. You're talking about two years after the adoption of Title IX. I came after so many women paved the way for me to have this opportunity, and I got recruited by Geno Auriemma.

"I got to play for one of the best women's basketball college programs in the country, win a national championship and play with great teammates who made me look really good. And then on top of all of that I graduated when two professional leagues were starting in the United States. I always say I was blessed by my timing."

Rizzotti on the UConn-Tennessee rivalry 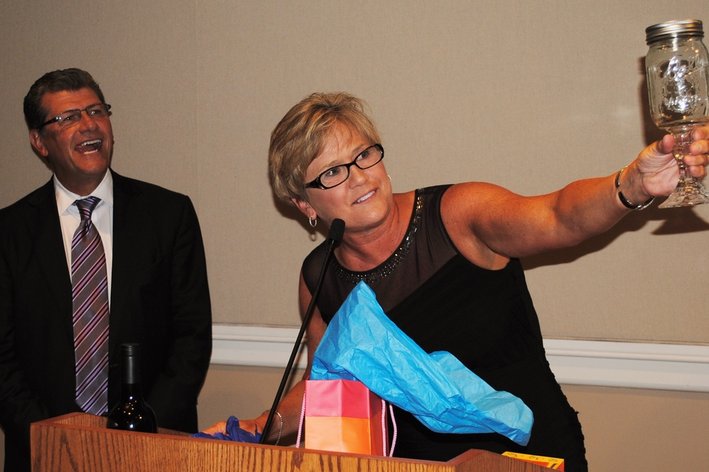 Rizzotti offers her thoughts on the significance of the UConn-Tennessee series.

What did the recognition mean to her, especially since Auriemma and teammate Rebecca Lobo are already in the hall?

"It means so much because playing at UConn defined my adult life, the people that I met and the foundations that I set in terms of relationships for the last 20 years has been about my decision to go there," Rizzotti said. "Geno is one of my best mentors and taught me so much about the game of basketball. Rebecca is one of my best friends and taught me about courage and humility. I am honored to be inducted after those guys because they are two of the closest people in my life."

Who had the greatest influence on Rizzotti?

"It would be Geno. There would be no rival there," Rizzotti said. "I think my parents taught me the most about being a competitor and being hard-working and being a good person, but as far as who influenced my basketball career, from day one it was him.

"He taught me how to be a leader as a young player and at that time even how to be a coach, which I never knew I wanted to do. He taught me how to use my drive and my competitiveness in the right way. He channeled all of my energies. He trusted me, and he believed in me. For everything I have accomplished in my career and for me being in the Hall of Fame, it is certainly due to him."

Annette Smith-Knight: "I had a lot talent, but it was raw talent."

Smith-Knight led Texas to the 1986 national title and is the school's all-time leading scorer with 2,523 points. She earned Kodak All-American honors in 1984.

She took the question literally and cited her statistics before letting loose with a laugh.

"I said, ‘Wow,' and the first thing I did was call my dad (Jim Smith) - my mom (Dorothy Smith) is deceased; she passed away three years ago - and my sisters and brothers, and they were excited," she said. "There were six in my family and four of us got basketball scholarships. So I think they were more excited than I was."

Who had the greatest influence on Smith-Knight?

"My brothers and Jody Conradt," Smith-Knight said. "We played every day. We even got in trouble for playing every day because we had strict rules. When you come home, you do your homework first, you do your chores. But, of course, we didn't do that. We ran to the court. We would get spankings.

"I had a lot talent, but it was raw talent. I didn't know how good I really was because I didn't have the proper training but once I got there and working under her and her assistant coaches I was able to do a lot more than what I knew I had in me."

Sue Wicks: "I had a vision of what greatness was"

How did Wicks earn her nod to the WBHOF?

"That is a great question," she said. "I have to be honest, in a review of my career, I think I played extremely well at times. I had great seasons. I had a great career. But I don't think there was anything that changed basketball or that was a watershed moment or that was a landmark. I just played.

"You could talk about Nancy Lieberman or Carol Blazejowski or Cynthia Cooper, that was a moment you could remember, she did that, she changed the game, Rebecca Lobo, Tennessee teams, Geno, a different level."

"It means a lot," she said. "I just played and was part of women's basketball."

Who had the greatest influence on Wicks?

"Cheryl Miller. That was it. Then, I had a vision of what greatness was. I aspired to that. The first glimpse, even if it was a small clip on television of seeing Cheryl Miller, I was blown away. I had something to dream about. When I got to Rutgers, I had Theresa Grentz, one of the best players of all time and one of the greatest coaches. She never even mentioned that she was a three-time All-American, player of the year and national champion. She was just there coaching me. She had a lot of charisma, the way held herself, I idolized her.

"When I was a professional in Europe, players I would see, the way they held themselves, the pride that they had, the way that they played in total obscurity most of the time, I modeled myself after them. Along the way I would find someone who had a quality I really admired and I would try and emulate them."

The 2013 Women's Basketball Hall of Fame