Though the Wildcats would fall, K-State center Breanna Lewis and a sell-out crowd in Bramlage Coliseum showed the Huskies why there’s no place like home for UConn’s first game in the state of Kansas.

Share All sharing options for: UConn knocks out K-State in surprising slugfest

MANHATTAN, KS - The UConn women’s basketball team’s first visit to Bramlage Coliseum didn’t start out quite as planned—all thanks to a stout Kansas State defense and the Wildcats’ Breanna Lewis.

“There is not a good loss,” said Jeff Mittie, Kansas State head coach. “I wanted to win this game; I wanted to find a way, and I believed that we could find a way to pull the upset. There were a lot of positives out of today. I was really proud of our group because we really played well.”

The Huskies’ exemplary shooting was lowered to just 50 percent from beyond the arc on 14 attempts and 58 percent of field goals in the first half.

They would kick off a 15-0 first quarter run after trailing K-State 2-4 with a jumper by Napheesa Collier. From there, the Huskies deepened their lead to 25-8 with the first quarter winding down.

But the Wildcats wouldn’t back down. Jeff Mittie’s defense led the charge with Brianna Lewis at the helm. Lewis recorded all three of the Wildcats blocks in the first half, while adding two steals into the mix.

“We did not defend (Lewis) well, and there probably is a reason for that,” said Geno Auriemma, UConn head coach. “She is not easy to defend. I think she just overpowered us a couple of times in the lane, but that gave us a chance we were willing to take to try to keep some of the other guys in check.”

After trailing by 21, Kansas State would surge in the second to narrow the deficit to 45-31.

The third quarter seemed to bear the same burden as the first two for the Huskies, but Auriemma’s offense began to sync in the fourth after Collier and Katie Lou Samuelson took control. 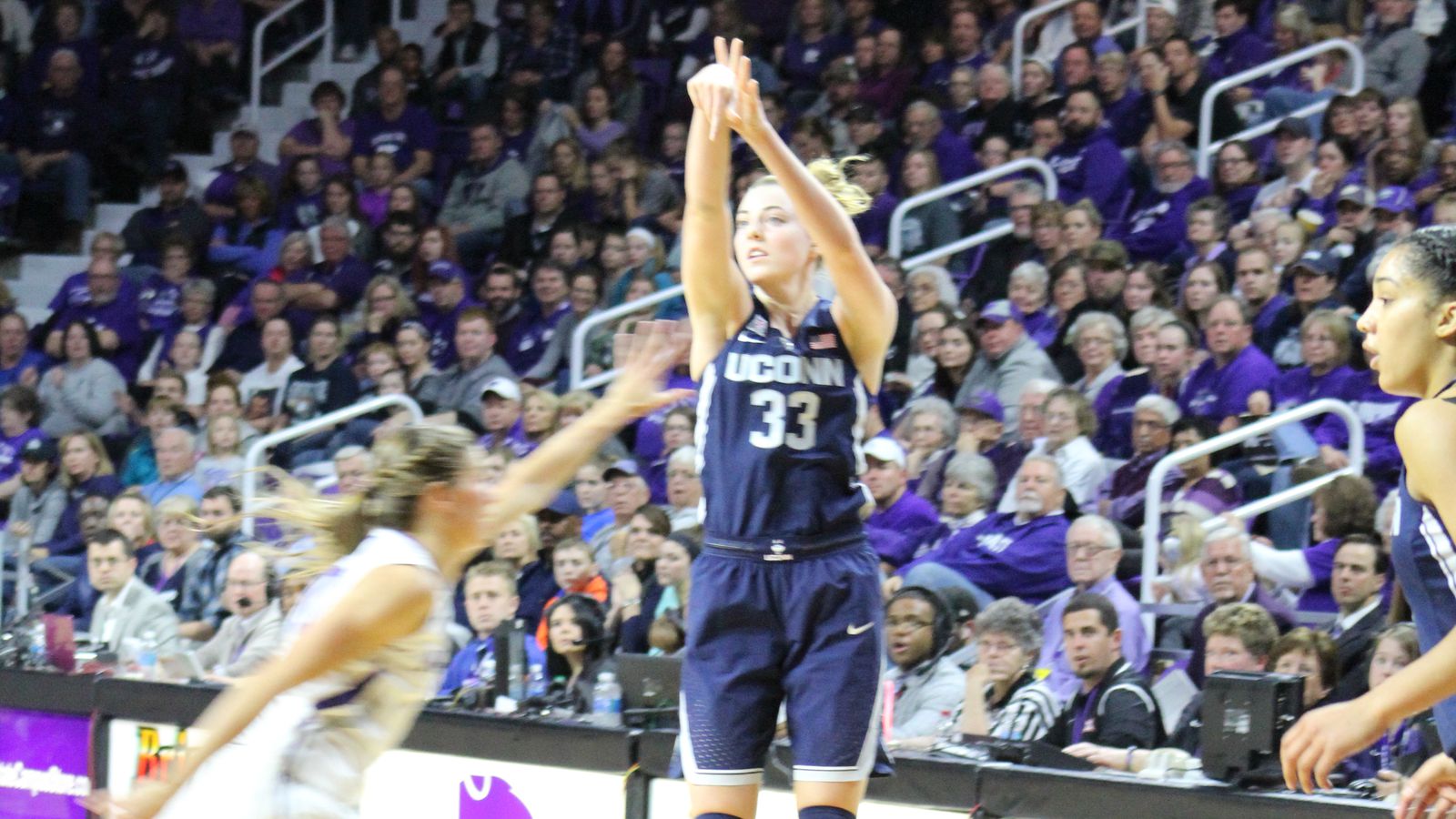 UConn still on top with win over K-State

No. 1 Connecticut shines in front of a sold-out crowd in Manhattan

Collier ended the day with 22 points while Samuelson ended with 26 points, 18 of which were 3-point shots.

“I definitely took a lot of 3’s today,” Samuelson said. “I was pretty confident in my shot even though I missed a lot. I made a lot too. I just felt confident taking that shot and they were giving it to me.”

The Huskies’ lead never slipped back below double digits, but the Wildcats also didn’t let it get out of hand per the usual UConn lead. Turnovers plagued both teams with 16 each, but especially the Wildcats as those turnovers came at the wrong times. UConn scored 19 points off turnovers, while K-State scored 16 points.

The Huskies dished out 18 fast break points, and recorded a total of 35 rebounds to the Wildcats’ 28.

In the fourth quarter, the Huskies’ lane presence and versatile shooters overcame a strong Wildcat defense that hindered them in the first three. This, however, should be looked at as a testament to the fight and the fire of Mittie and his Wildcats, as they head into a tough Big 12 Conference in January.