Do you understand how unbelievably good Paul VI is?

Perhaps the Naples Holiday Shootout did not have one of its best fields ever but it probably had a strong candidate for its most exciting final ever as Paul VI defeated Miami Country Day 70-65 in two overtimes to capture the event's American Division. Wenonah High School easily won the National Division.

Share All sharing options for: Do you understand how unbelievably good Paul VI is?

Twenty-four colleges, mostly from East Coast states, attended one or more days of the event which ran December 29-31 at St. John Neumann High School in Naples, Florida.  The Naples Sports Foundation works very hard each year to put together an elite field.  This year they waited (perhaps too long) on a few big name teams that decided not to attend, and that resulted in a good field but one not up to its recent lofty standards.

Picking up the action at the finals...

In DC earlier this month, Paul VI had won a closely played 63-56 contest versus the Floridians.  The re-match in Naples would prove to be even harder fought taking two extra frames.

As expected, Miami Country Day's junior guard tandem (one of the best in the nation) of Lewis and Marshall (both on all-tournament team) would attempt to counter Paul VI's superior size up front and depth (one of its freshmen JV's already has division one offers!) off the bench.  There was little separation throughout the game with the team from Northern Virginia ahead 7-6, 23-19 and 43-38 as quarters ended.

As regulation ended, Paul VI's Jasmine Whitney missed a baseline jumper to win.  Thus, it was on to overtime with the score 55 all.  Again there was little separation in overtime #1 with Miami Country Day (MCD) getting the last possession (26 seconds) with the tied at 63.

Holding too long to get a shot, Country Day never got a meaningful look. Using its superior front line and better execution, Paul VI maintained a slight control in overtime #2 with three different players scoring while only Channise Lewis hit a pair of free throws for Country Day.

The stats told the story.  Paul VI was 21/23 from the charity stripe to MCD's 11/18.  The Floridians hoisted up 26 threes making eight (helping them stay in the game) to Paul VI's modest 10 attempts making three.  Interestingly MCD had a nine to one offensive rebounding edge, but Paul VI scored much more readily in close.

Wenonah came into the game undefeated while Lake Highland had lost twice, most recently to St. Francis of Georgia by 11 in the final at Myrtle Beach.  Here it was an old fashion beat-down over by half (38-16).

The Wenonah interior was far stronger physically, quicker off their feet and overall more athletic.  The lead got as high as 31 in the second half.  Wenonah was led by its all-tournament team members Alexis Dye with 25 points and Kaitlyn Rodgers with 14 points.

Lake Highland was led by Tyra Cox (5-8 shooting guard, 2017) with 20 points.  Given Wenonah's domination of this (considered second eight) division, one has to wonder why they were not in the American Division.

Below is the Naples Holiday Shootout All-Tournament Team in alphabetical order (with listed height, position, graduation year and school plus school location in parenthesis).

Alvarez is an adept three-point shooter off the pass.  In the final versus Paul VI High School, she hit five.  She can play the point guard slot but on a guard heavy Miami Country Day, she will have to wait her turn to play that position on a full-time basis. 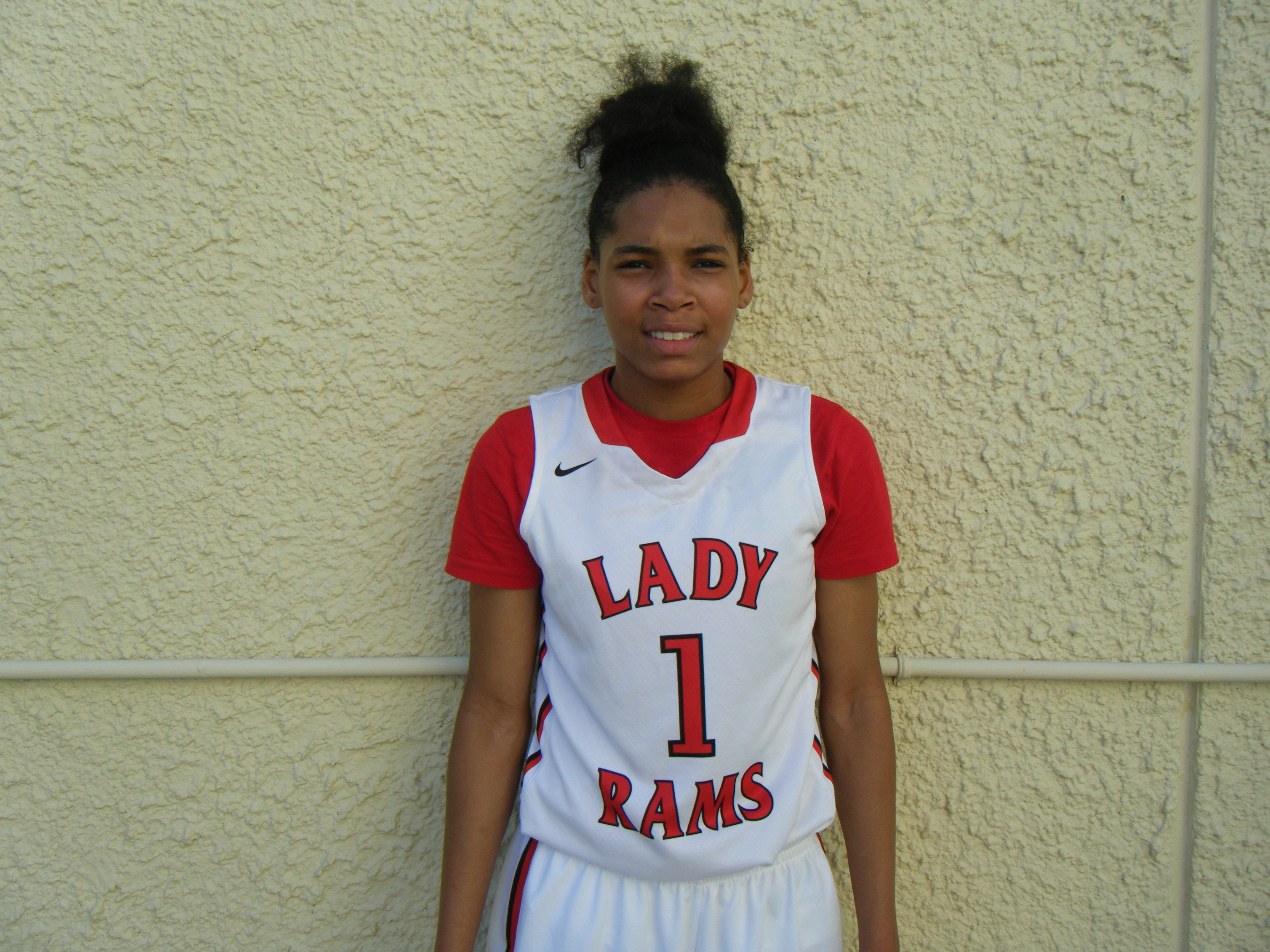 Cooke is quickly becoming known as one of the top 2019 point guard prospects.  She has all of the elements you look for (handles, IQ, poise, quickness, leadership, penetrating ability and perimeter stroke).  With many tools to work with, she has to now put them all together into one package.

A bit undersized at the next level, Dye is a fine high school post player powerfully built but still quick on her feet.  Her 25-point/10 rebound performance in the Division final versus Lake Highland made this selection a no-brainer.

Figueroa is well-known in Louisiana for her entertaining style of play.  Her drive and dish moves passing to open players makes the crowd go "ooh."   She led her team in scoring (16 points) in her team's 57-52 loss to Fort Myers in the National Division third place game.

Henderson is certainly one of the top prospects in Florida's 2018 class.  She can score via the drive, midrange or three-ball.  On day three, she posted 14 points with five assists.

James led her team in assists (four) in the final's victory.  For more on Raven, see link (What everybody ought to know about Paul VI -- they're legit - Swish Appeal ) 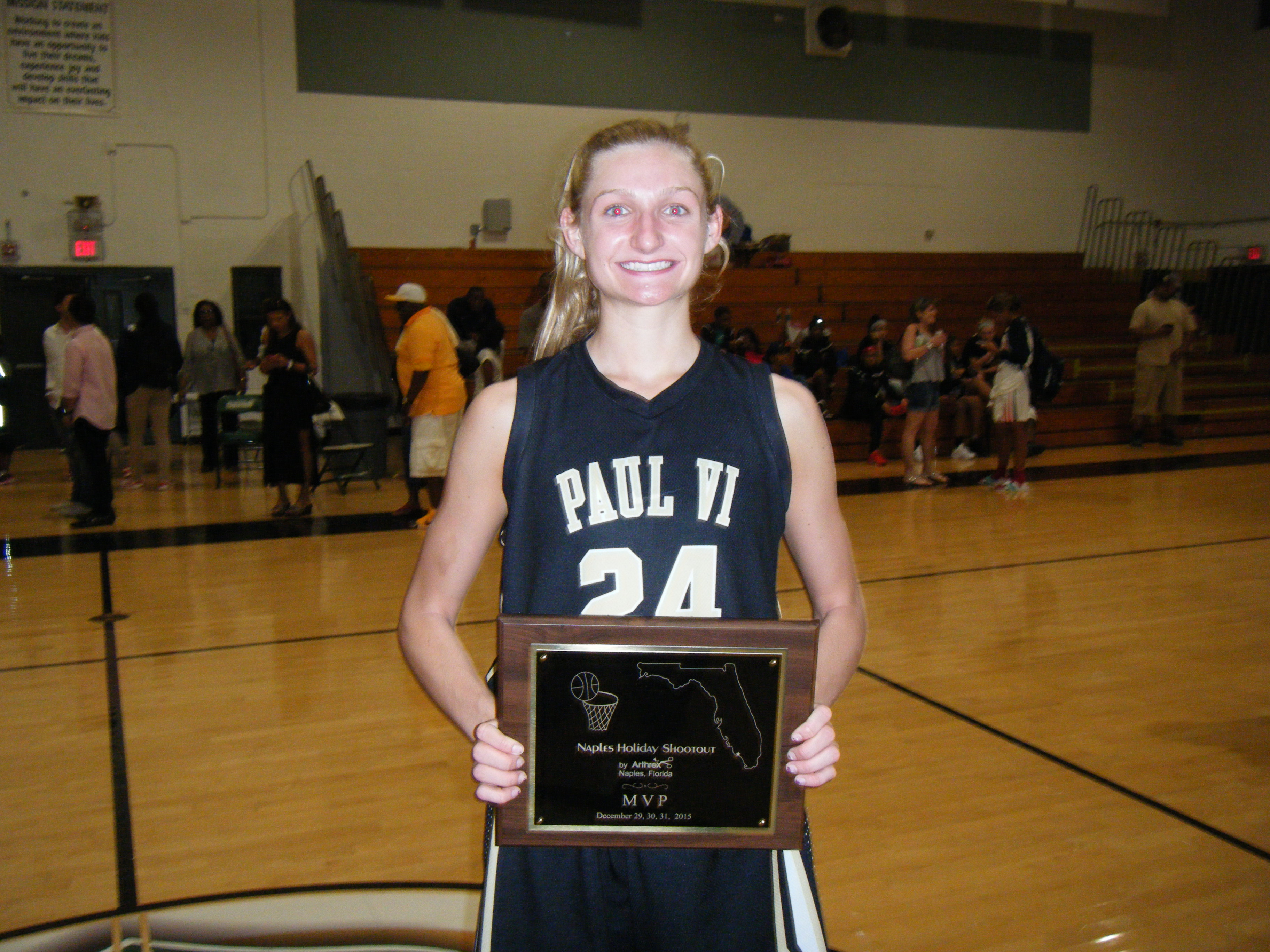 Klimkiewicz shined (25 points including 2 threes and a perfect 7/7 from the foul line) in the final after contributing solid performances earlier in the event, thus earning overall MVP honors in Naples.  She tends to operate along the baseline.  Power 5 schools should be monitoring her progress.

Brianna, a Texas Southern signee, ran the show (five assists) and scored 14 points for Fremd in winning the American Division third pace game (52-49) over Toledo Rogers.  She showed an ability to hit the three-ball and mid-range shot.

Channise is considered one of the top point guard prospects nationally for the 2017 class.   She can hit outside to beyond the arc, but penetration is how she does most of her offensive damage.

Jordan, an Alabama signee, is the heart and soul of Lake Highland's team.  She runs the offense, often leads them in scoring (mostly by attacking) and plays hard on defense.

In the American Division final, Marshall led Miami Country Day with 20 points on 8/12 from the field.  For more on this Power 5 prospect see link (6'10" Felicia Aiyeotan, top players show out at She Got Game 2015 - Swish Appeal )

Rodgers, a Mississippi signee, posted 14 points and nine rebounds as her team won the National Division.  She has a nice mid-range face-up stroke in addition to scoring around the basket,

Whitney continued her solid play in southwest Florida.  For more on Jasmine see link (What everybody ought to know about Paul VI -- they're legit - Swish Appeal )