The 6th Annual Atlanta Summer Slam brought 135 teams to two playing venues in Lithonia and Stone Mountain, Georgia, during the July 24-26 college viewing period.  Summer Slam uses a format of pre-set games, so college evaluators know when the teams they want to see will be playing.

About 150 colleges from mostly the East Coast, Midwest and Southwest with a few from the West Coast watched teams ranging from middle school to rising seniors.  What is unique about the event is that some teams play multiple games while others show up for a single contest, using it as a tune-up for other events (such as Nike Nationals) still to come before the July evaluation period ends.

Players discussed below are mentioned either for a particular performance at the event or for special upside that makes her a player to be aware of for future college success.  As in the past, you will notice a large number of younger players mentioned as Summer Slam has over the years been a place where lesser known talent first made its way onto a bigger stage.

Players below are listed alphabetically by graduation year, given height, position and club team with the hometown in parenthesis.  Also, a player whom we had featured in club basketball write-ups this spring or summer were passed over for players not featured previously from club ball this year. 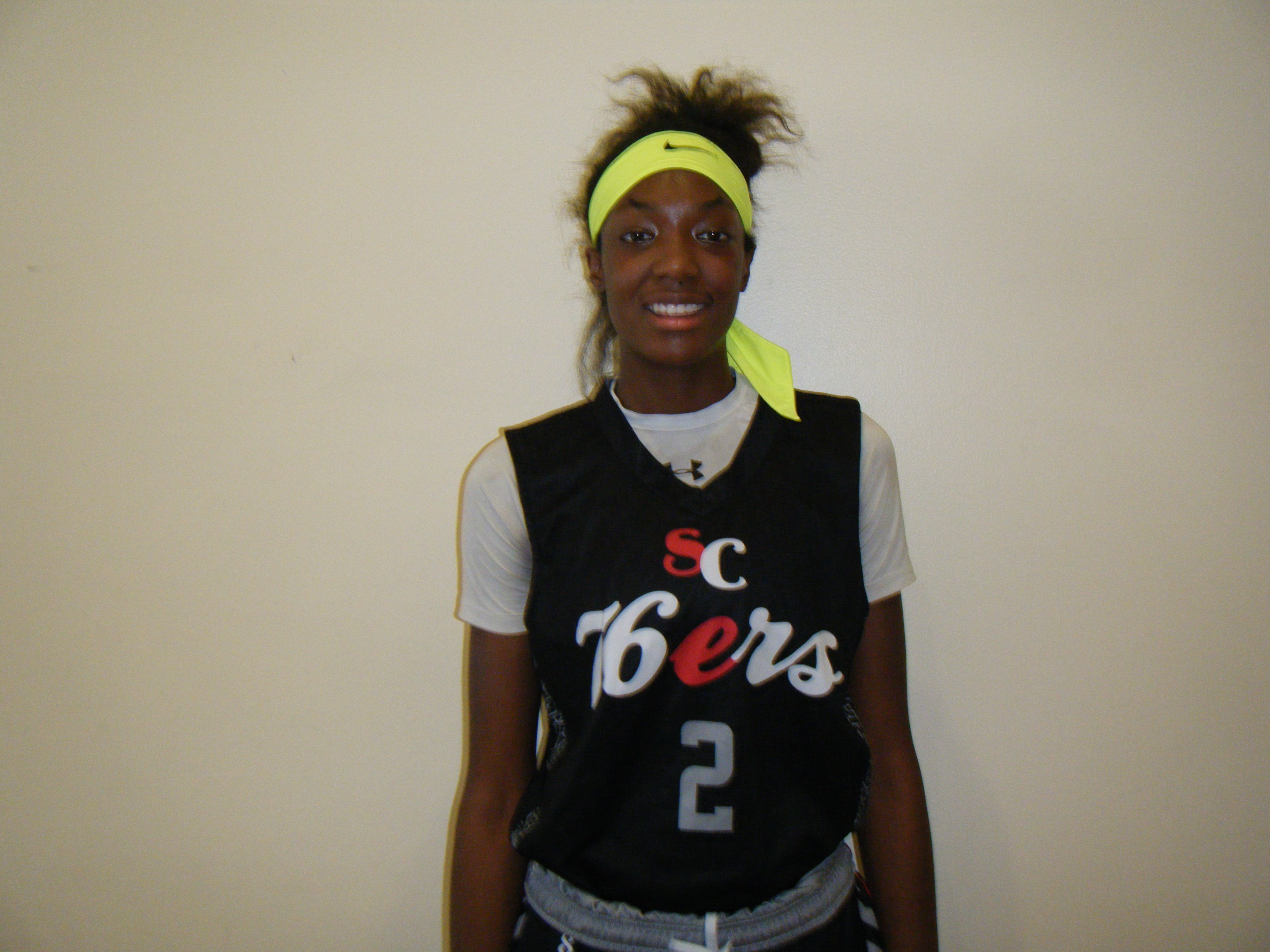 Dunlap's contribution in the 54-49 come from behind victory over New Heights Blue 17U will not show up in any box score.  Orally committed to the University of North Carolina, she stabilized her team in the last five minutes of the second half getting everyone in the right position while exerting a calming influence with the game in the balance.  Such a contribution is not what one might expect from a high-quality athlete (good speed, quick hands and feet) who is just learning to play on the perimeter. Offensively, Dunlap is a slasher who can hit the boards as well as block shots.   She is also developing a nice feel for the entry pass to the post.  Building perimeter range will be her greatest need to maximize success at the BCS level.

Edwards is versatile in that she can play either guard slot.  She appears to be more slasher than shooting over the top although she showed a mid-range stroke.  Like the rest of her team, she understands how to play the role currently assigned.   Perhaps having less talent than a lot of club teams, it is hard to argue the results of the Blazers Orange squad that has only lost one game (to undefeated Nike team Cal Stars and that in overtime!) total this spring and summer club ball season.

James is an unusual player in that she has tremendous strengths which allow her to dominates games (40 points here in one and a near triple double in another).  She is a powerful athlete hard to keep out of the lane where she does most of her damage.  She sees the court well on the fast break.  Defensively, she can pile up the blocks with superior timing to maximize her good "ups."  The downside is that her outside shot comes and goes, and her use of left-hand needs to improve markedly.  At times, she needs to play harder.  Programs from the BCS level down are monitoring her development that may take some patience at the next level before the potential can be maximized.

Rudd, orally committed to North Carolina State, appeared to be playing better this July compared to last.  She has a better balance between shooting and driving to score (forced it more last year).  Along with that, she is working to distribute the ball more efficiently. 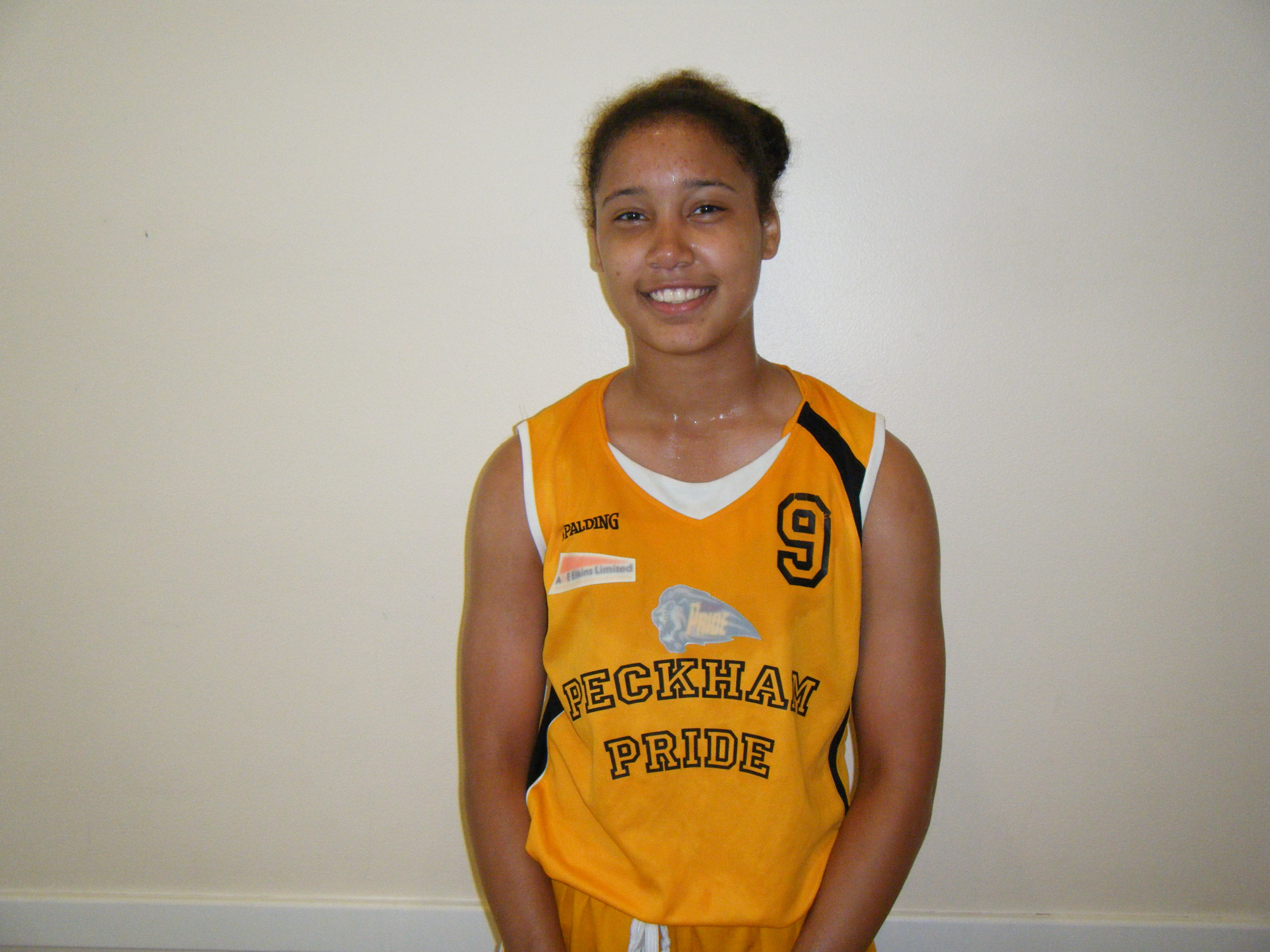 Edwards has only been playing basketball for two years.  She shows decent athleticism driving to the basket primarily going left.  She realizes she needs to add more skills to her game and hopes to play college ball in the USA in a few years.  In what may be a developing trend, her club team came over here in July to get better competition and exposure.  In talking to one of the coaches in the Pride's program, basketball for girls is growing in England.  Khaleah plays for Peckham's Pride (started in 2007) in the national league and attends City of London High School which contains a basketball academy (about 150 to 200 participants, 1/3 female) which started in 2012.  Team playing in Summer Slam is a mixture of players from the London and Peckham programs with the name playing under here a composite of the two.

Michaela (I won't attempt the last name!) is a quality athlete with good skills and motor.  She runs the court very well using her speed to get out on the break and can handle some while running at a brisk pace.  In the half court, she can create a mid-range jumper off the bounce.  Currently more 4F than 3F, she could still increase her value at the next level by being able to move out to the small forward position as she is a bit undersized as a power forward.  Regardless, BCS programs should be monitoring this player.

The feeling on coaches row was that Townsend was the proverbial half step slow.  However, she showed the ability to compensate for this by both being able to shoot from the perimeter as well as drive hard along the baseline using her strong frame.  All the while, she was taking what the defense would give her within the context of the Blazer offense. 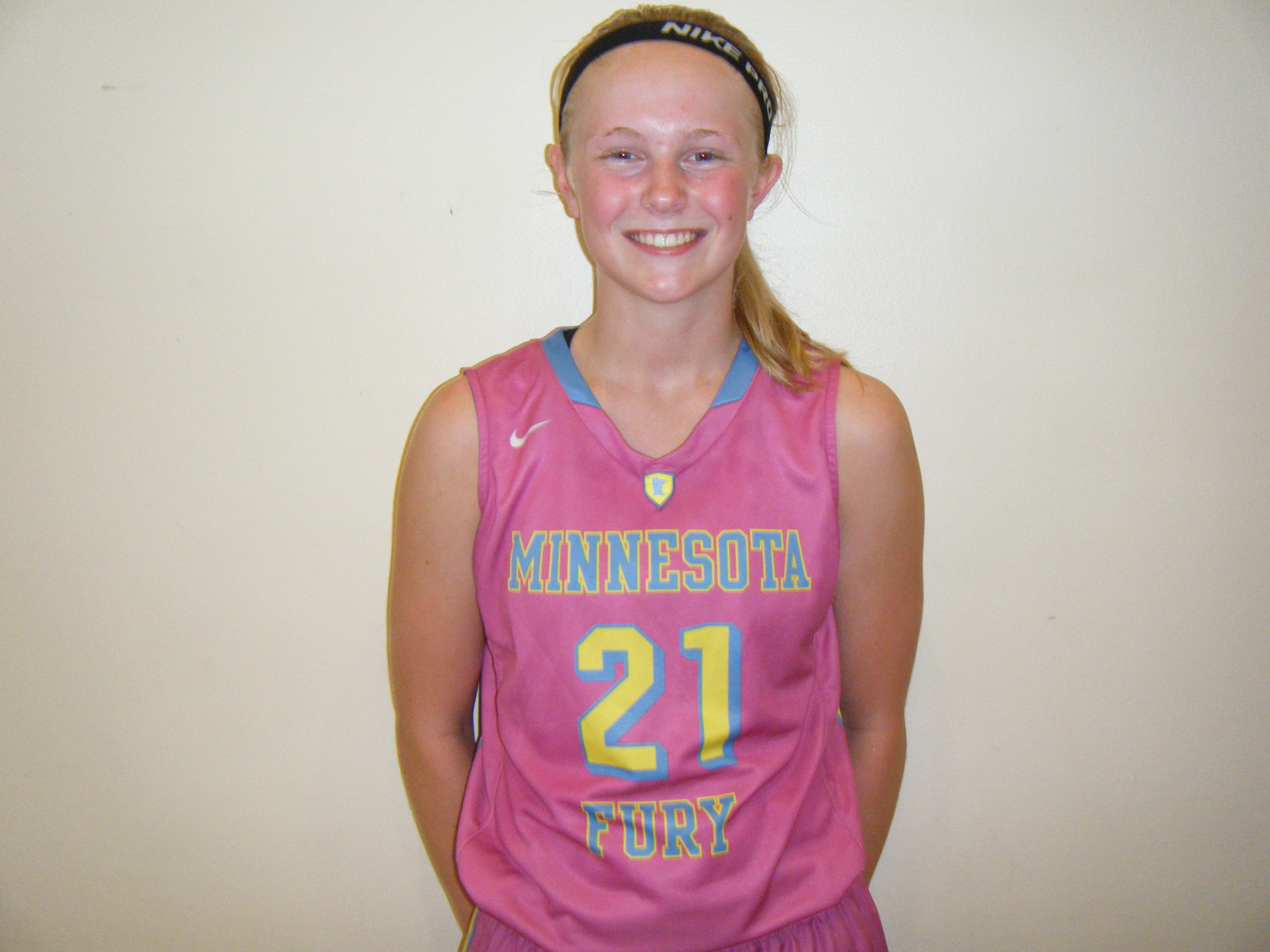 Wheatcraft runs well and plays hard.  She needs to get stronger to not get knocked off rebounding position.  Offensively, she has a good skill set able to drive the key but also score the ball on the perimeter to beyond the arc.  BCS schools should be monitoring her development over the next year.  This Fury team won the Minnesota AAU title in its age class defeating North Tartan, which won the 2017 (sophomore) Showcase at the Battle in the Boro.  Minnesota appears to be pretty loaded with talent these days! 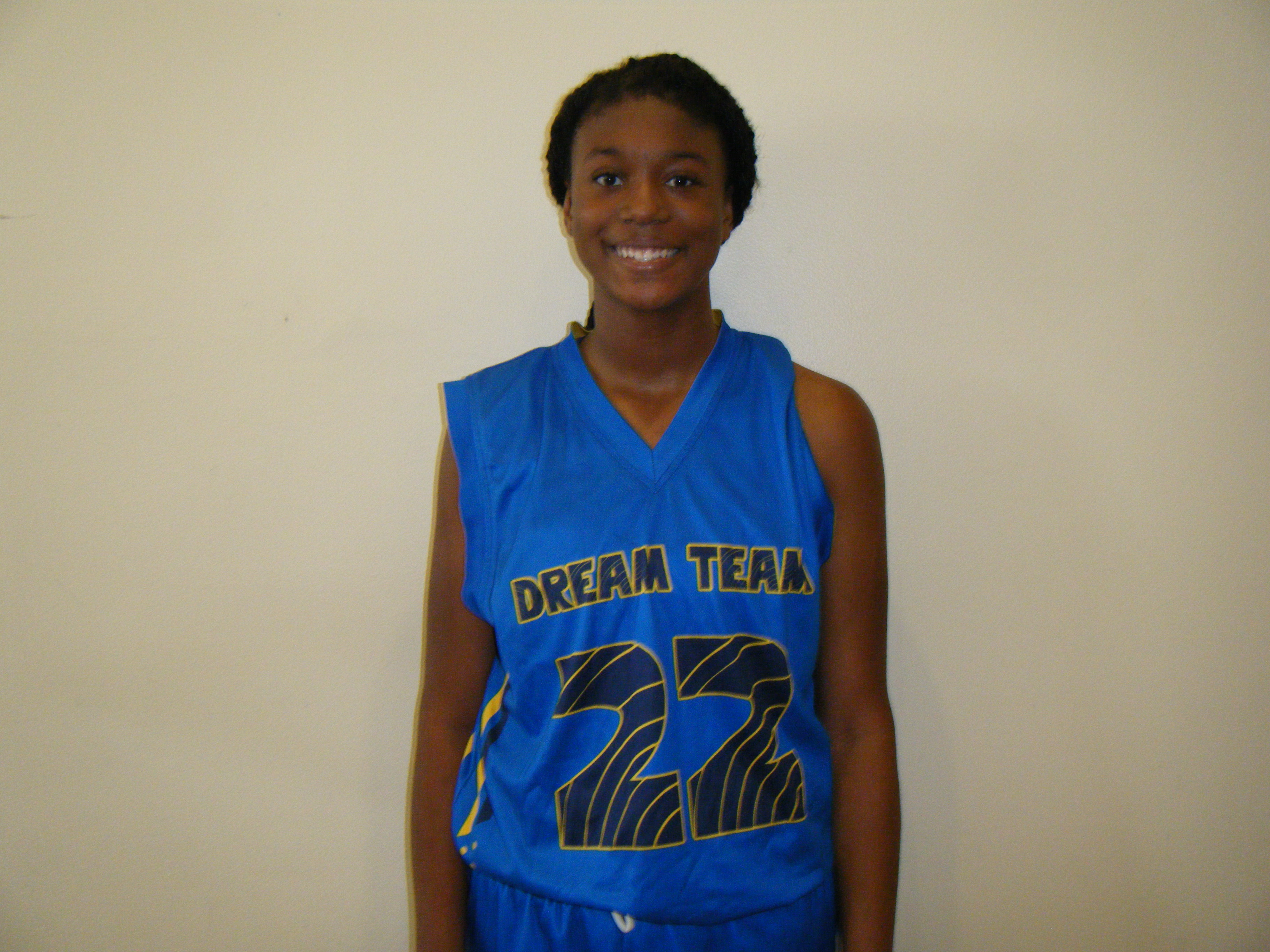 Wright is one of those above average athletic post players with BCS upside but not there yet.  She has good hands (active on defense) and will fight for rebounds in the paint. For her size, she shows a decent amount of ball handling (still room for improvement). Building some shooting range and consistency of making foul shots are two other areas needing upgrades  for this BCS post prospect 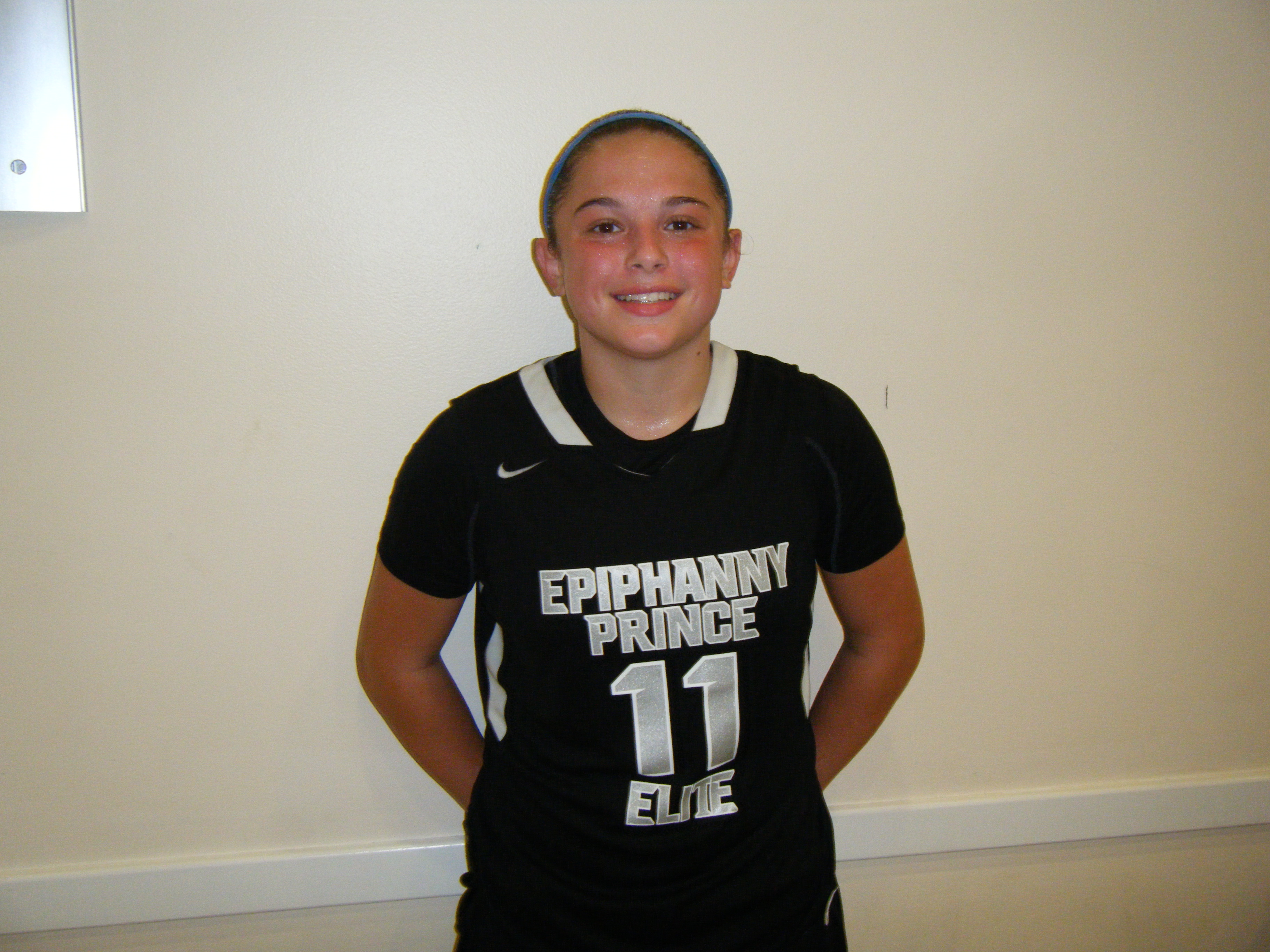 Jenna Annecchianco of Exodus EP Nike 15U (by Bob Corwin)

Jenna (I'm still working on the last name) exudes toughness, leadership, basketball IQ and fight, particularly impressive for such a young lead guard.  Offensively, she scores via penetration and defensively, she is not afraid to take a charge from a bigger opponent.  She needs to improve perimeter shooting (didn't take one when viewed) and could still strengthen her left-hand dribble a bit.  How high she will get recruited at the next level will likely depend on how those areas look in a few years.  Her team used its 47-45 victory over an older Motor City Top Ten team to help prepare for its next stop (Nike Nationals Juniors Division) about two hours drive away in North Augusta, South Carolina.

Amaya is a very strong penetrator taking the ball to the rim or dishing off along the way.  She also has good vision on the fast break.  Defensively, she uses her length to get all over the opposing ball handler. A likely BCS prospect, she needs to improve her perimeter stroke and shooting range to become a more complete player.

Jenna impresses you as she is playing up two years and functioning on an older team against older opponents.  A decent athlete, she can make perimeter shots out to beyond the arc as well as slash to the basket.  During this event, she played some point (which may not be her natural position) as college want someone her size to be point guard capable.  One of the top 2018's in Georgia, BCS programs are already eying her closely.

At Summer Slam, Dorsey has shown out well in some games but not others.  She is another player functioning on an older team versus older opponents.  Her game is primarily in the paint where she posts and hits face-up shots.  Well built and above average athletically, BCS programs like her game for the future even if she is presently experiencing some bumps in the road.

Johnson has powerful penetrating ability to score when getting into the paint.  A spin move makes her all that harder to guard.  At times, she could play harder, and she needs to improve her perimeter range.  With her name not attached to a number in the coaches guidebook, BCS coaches (can't talk to club coaches during summer evaluation) were asking me who #21 was, thus an indication of their interest. 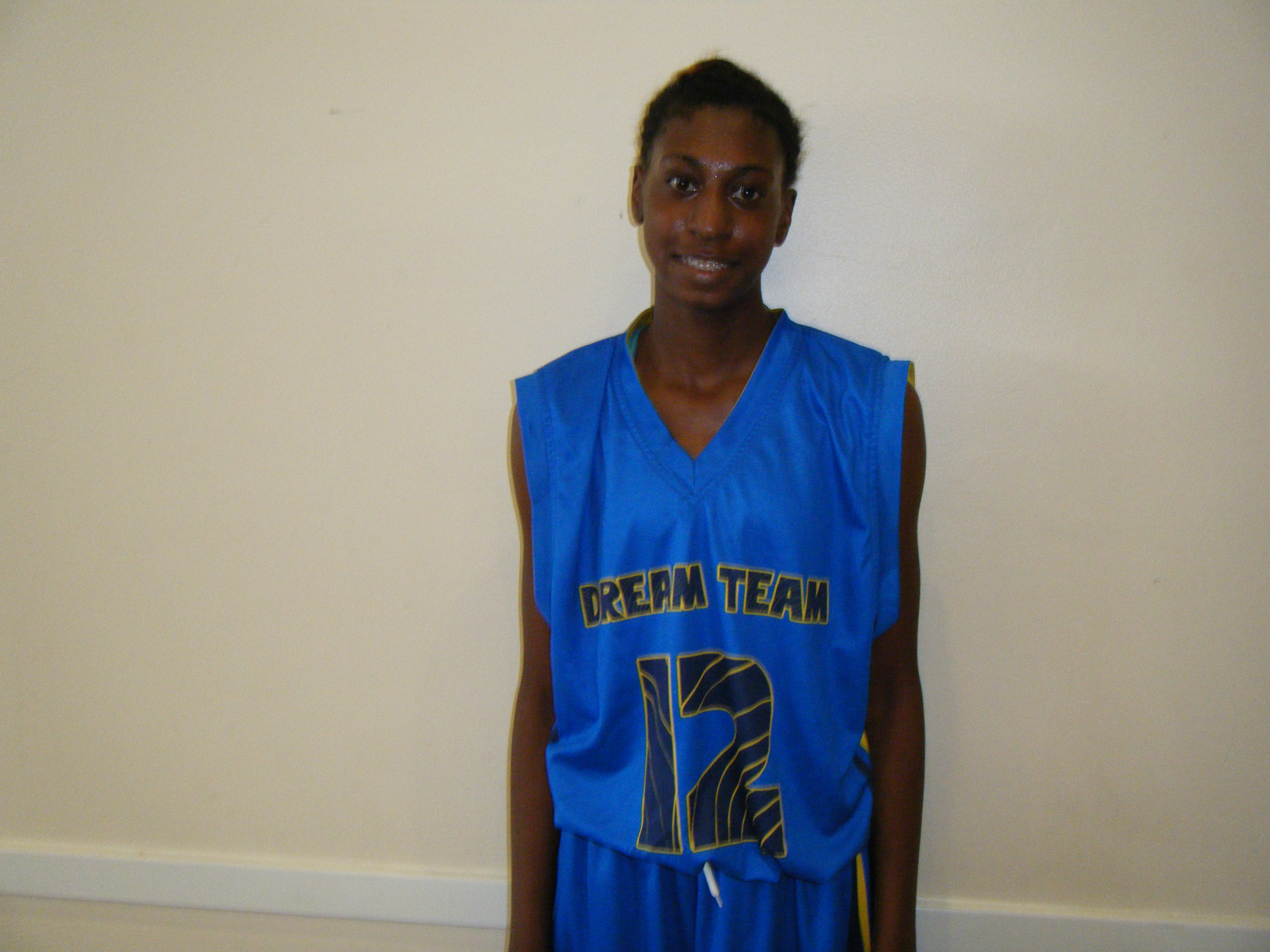 I have seen few if any players this spring or summer who play harder for longer stretches than Jhessyka Williams.  I call her part of my "high motor" team.  Whether it be guarding a player, attacking the offensive boards, chasing a loose ball or trailing a play on defense, this athletic player is there.  She needs to get stronger (as she is still a bit thin) and build shooting range. 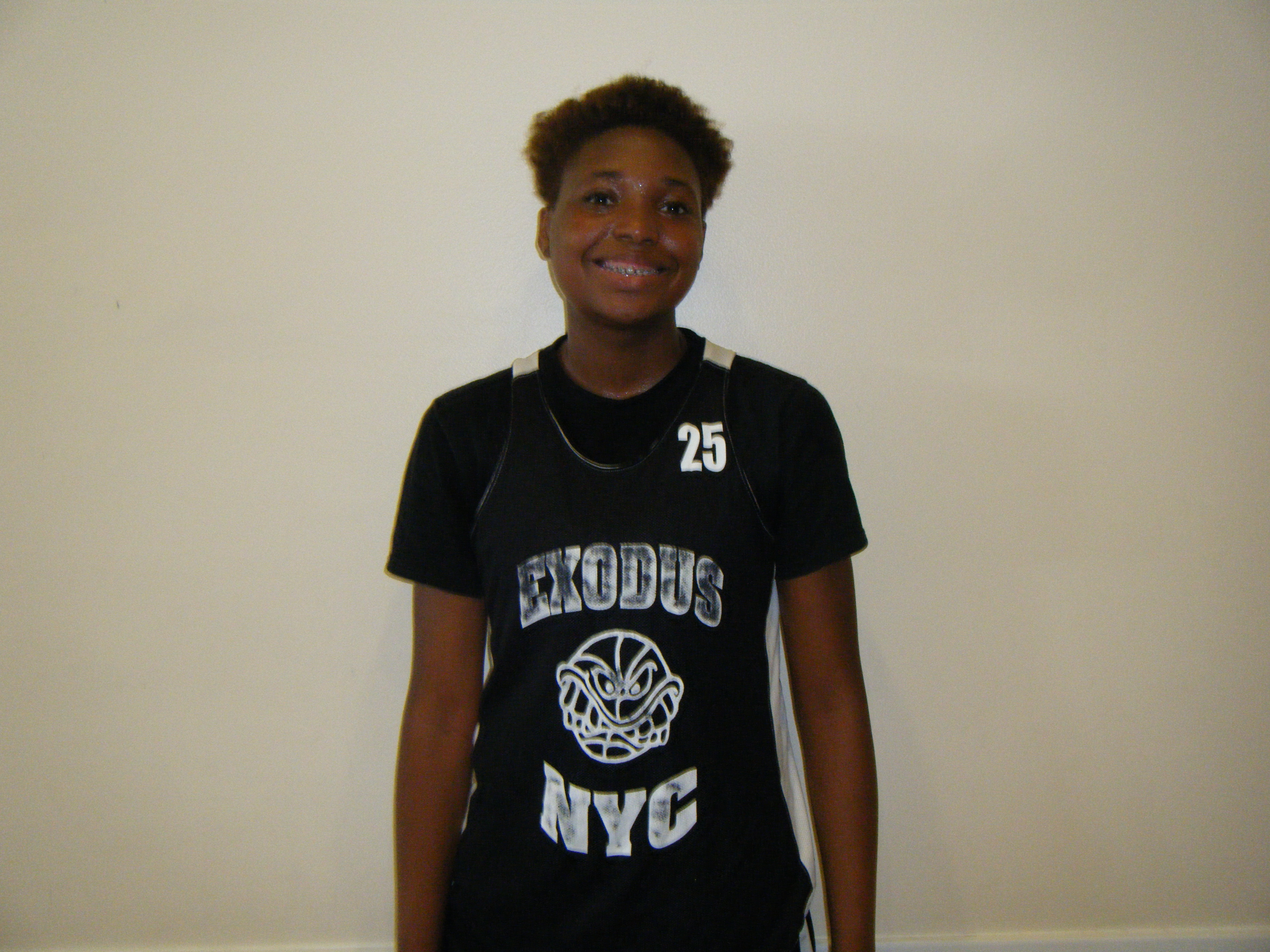 Shanniah Wright of Exodus 14U (by Bob Corwin)

Wright is a power athletic player with a good motor and willing to be physical at both ends in the lower paint.  Her face-up game needs to become more consistent.  Her performance at Summer Slam probably got her on to the radar of more college programs than had been the case coming into the event. 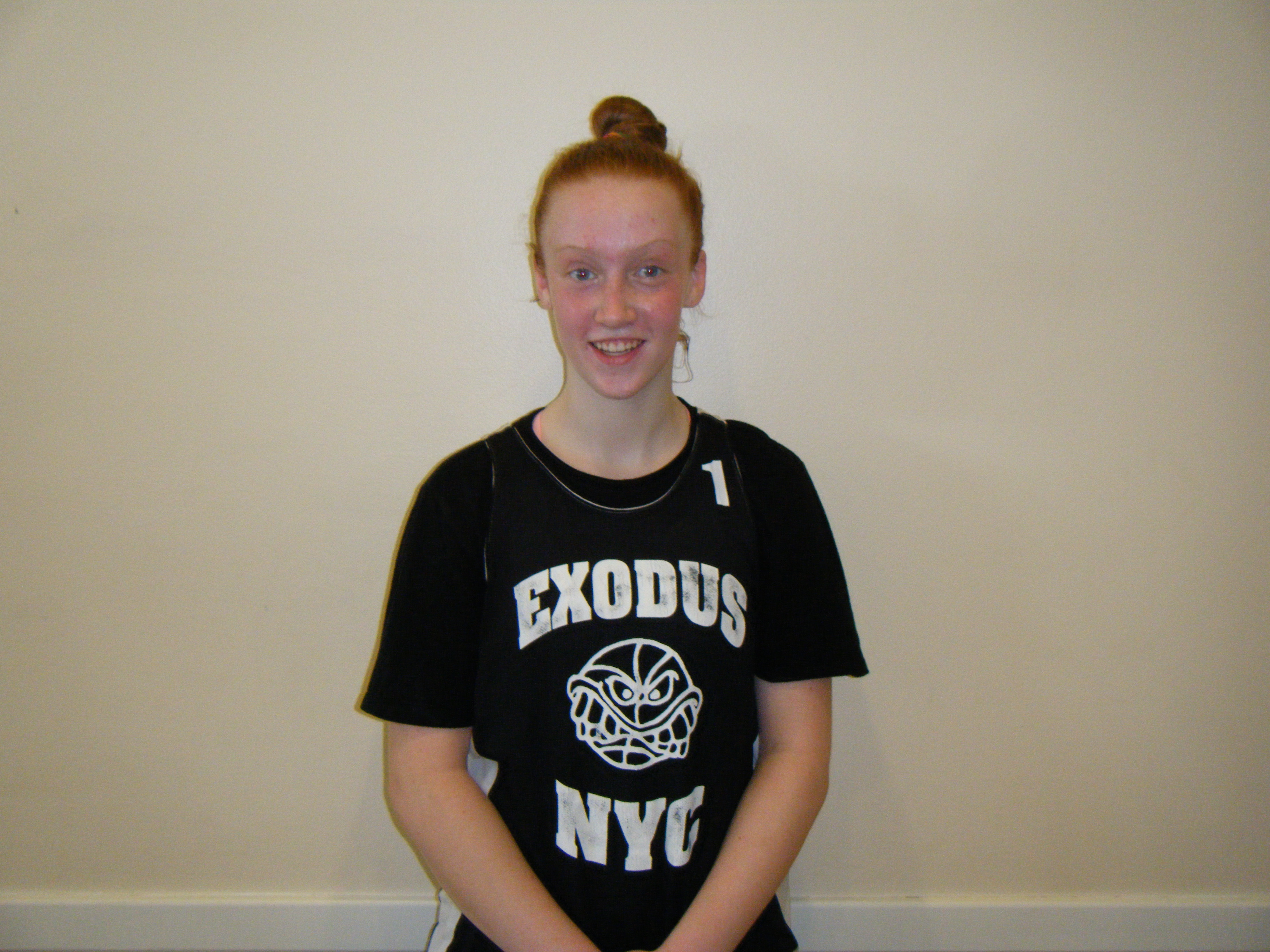 Lauren Hansen of Exodus 14U (by Bob Corwin)

Hansen is very advanced for her age showing well playing up a year (team primarily 2018 players) in club ball.  She thinks the game well, frames passes nicely and can hit shots to beyond the arc. She needs to use her left hand more for dribble and finish on left side. 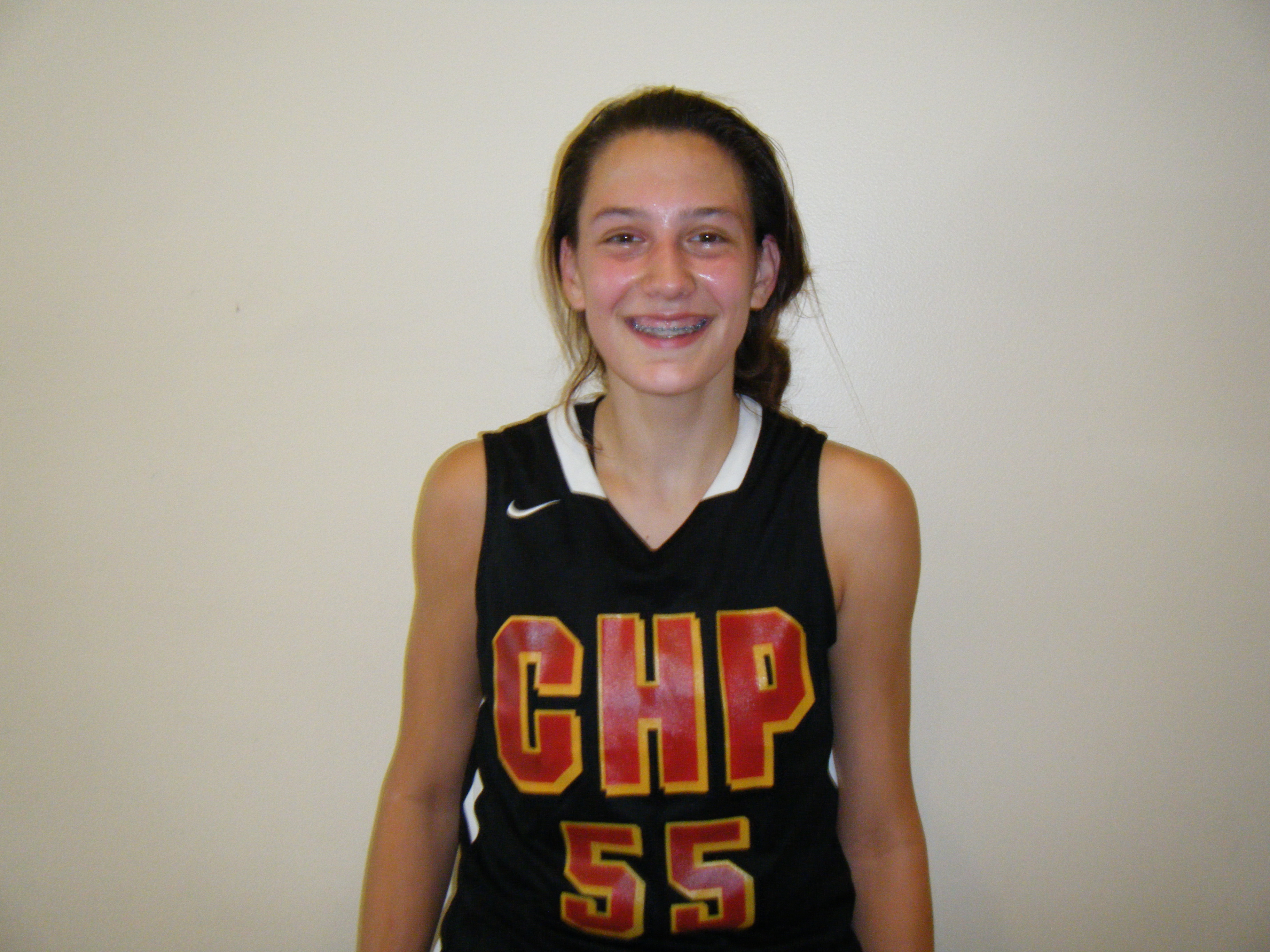 Hoefling is a team player, very willing to set a pick to get teammates open.  Offensively she likes to attack along the baseline able to finish with either hand (impressive) at the rim.  When asked about three-point shooting, she indicated she can hit them but that was not her job on this well-structured team that finished seconded at the AAU Eighth Grade Nationals.  At Summer Slam, the team defeated (38-28) Team Slink 2019 which had won the 2019 (8th grade) Showcase at the Battle in the Boro.