IEXCEL dominated the 2015 Suwanee Tournament of Champions 128-team field by winning four of eight divisions against a solid field of opponents.

Share All sharing options for: IEXCEL reigns over 2015 Suwanee Tournament of Champions

IEXCEL, a club out of the Metro New York City area, dominated the 2015 Suwanee Tournament of Champions winning four of eight divisions against a solid field of opponents.  See below for more details.

The event, held at the Suwanee Sports Academy in Suwanee, Georgia, since about the start of this century and again presented by All Star Girls Report, consisted of 128 teams (very few west of the Mississippi River) in eight brackets.

About 185 colleges (division one schools including about 15 division two's) from all over the USA (but mostly east of the Mississippi River) spent one or more days (July 6-8 viewable with July 5 [day one] in the non-viewing period) observing the talent which ranged from middle school players through rising seniors.

Michael T. White, who runs the event, did all he could to urge the club coaches to submit accurate rosters.   In spite of his best efforts, all too many rosters had players missing, playing under a different number, not on the printed roster, or worse yet a different player participating in a jersey listed for another player.

The problem is college coaches can't approach the club coaches (nor parents in the stands) during the summer evaluating period to get these corrections and additions.  One clever club coach put his corrected rosters on his Twitter feed.

IEXCEL dominates 17 and Under National Division

This contest was pretty much decided by halftime (32-20) with the victors pulling away in half two never being really threatened.  IEXCEL was considered the favorite coming in thanks to having a few more BCS high-level prospects, greater height, and more physical presence.

All Ohio Xpress is a very "play together" team that does not give up as witnessed by its 53-51 comeback win over BTR - Another Level (out of Oklahoma) in the B Bracket final.  IEXCEL was led by its two wings (Jocelyn Willoughby with 12 points and Desiree Elmore with 11) featured below.

No Ohio player reached double figures.  IEXCEL had previously dominated the A Bracket final (54-35) versus the Bolingbrook Panthers 17U out of the Greater Chicago area.

17 and Under Signature Division

In theory, this 32-team division, which was divided into two 16-team brackets like the National Division, is for weaker, yet still talented teams in this age group.

16 and Under National Division

The Ohio team pulled away in the second half. In this event, Team Ohio played some of the best "team ball" (passing and moving without the ball) that I have seen in summer basketball, truly fun to watch.

With IEXCEL 15 U winning the National Division 54-37 over South Carolina Future 15U and IEXCEL 14U winning the 15U Signature Division by the identical score over Peak Performance National 15U out of Georgia, the unifying game was not played. This is a common practice when two teams from the same club sweep the field at an event. .

This was overtime revenge for Florida-based FGB Future 14U, which lost badly to the Philadelphia-based team earlier this year.

Below are listed some of the players who performed in noteworthy fashion during the event. Players are listed within graduation year alphabetically with height, position and club team; school information as available in parenthesis. 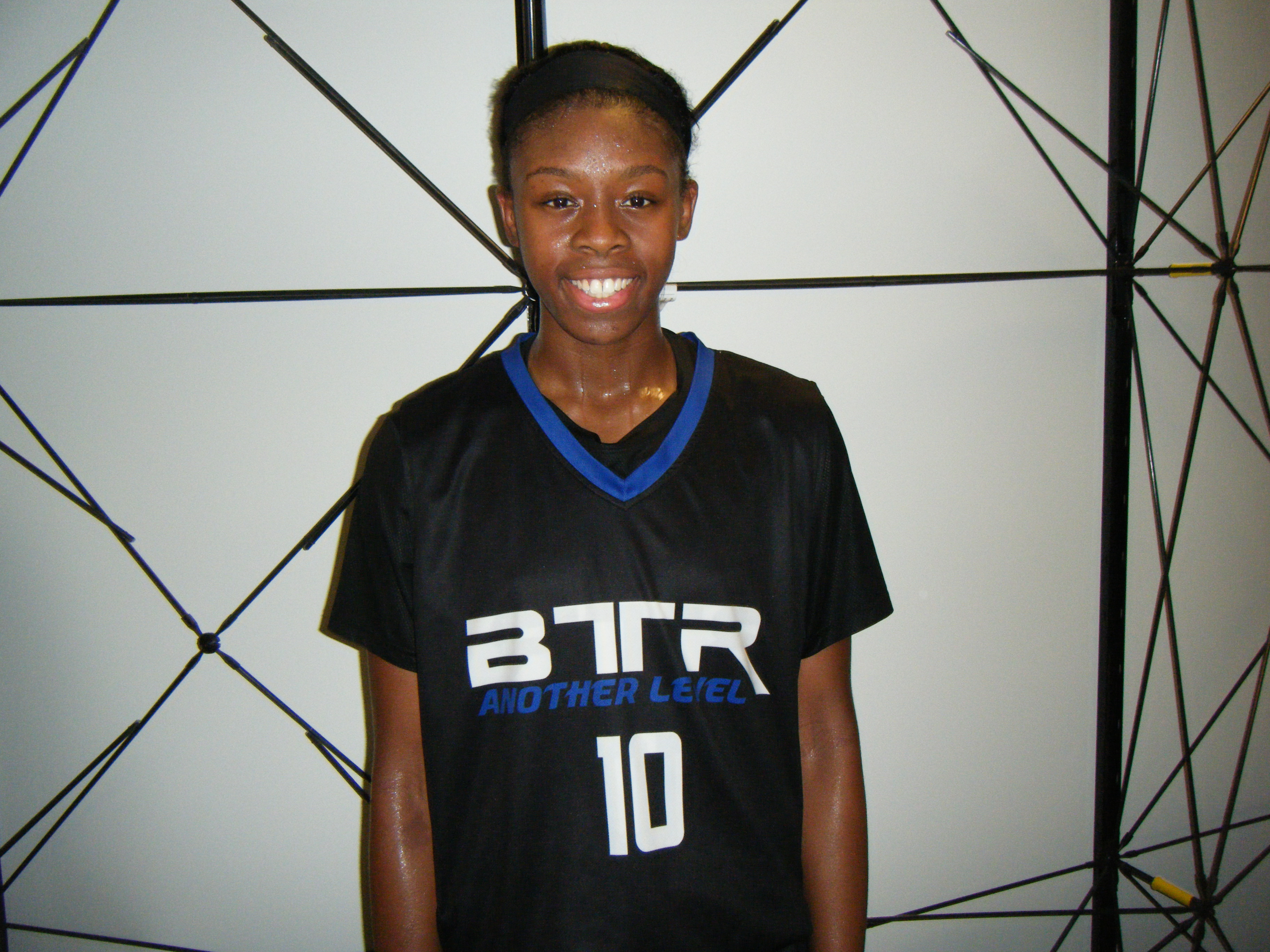 Areanna Combs, BTR - Another Level 17U (by Bob Corwin)

Combs, orally committed to Oklahoma State (with Arkansas, Florida Atlantic, Purdue and Rice also considered), plays the game at high speed yet is under control.  She can hurt the opponent by shooting the three or taking the ball to the basket.  Her foul shot also has an excellent form on its release. 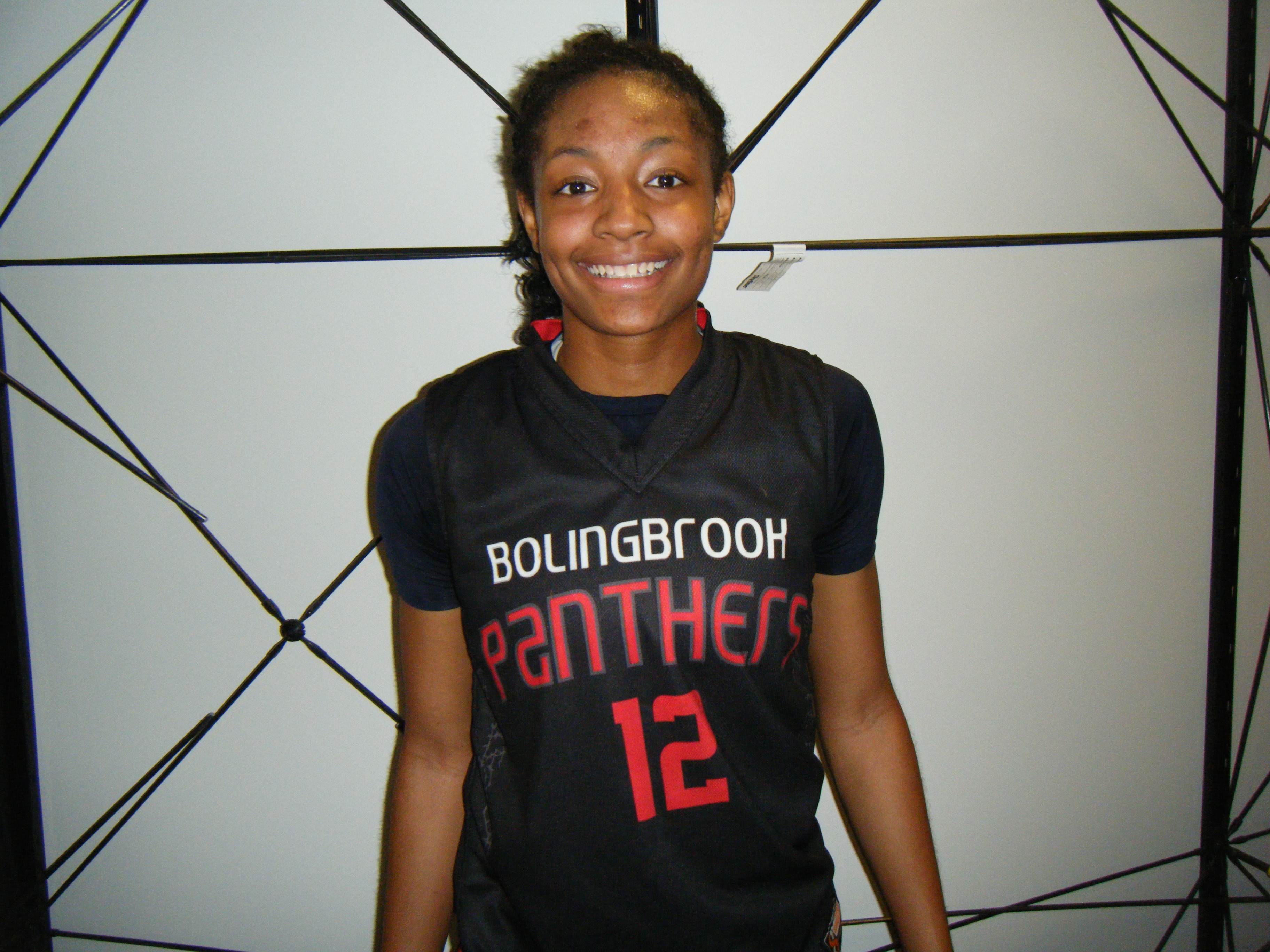 Looking for a penetrating guard with explosiveness to the basket?  Then look no further than Nicole Ekhomu!  She can create her own shot but has good passing ability to play within the team setting.  Capable of playing the point, she sees herself as more of a shooting guard.  Her efforts at the event helped get her team to the bracket final.  As to college, she is still sorting through a basket full of high major offers. 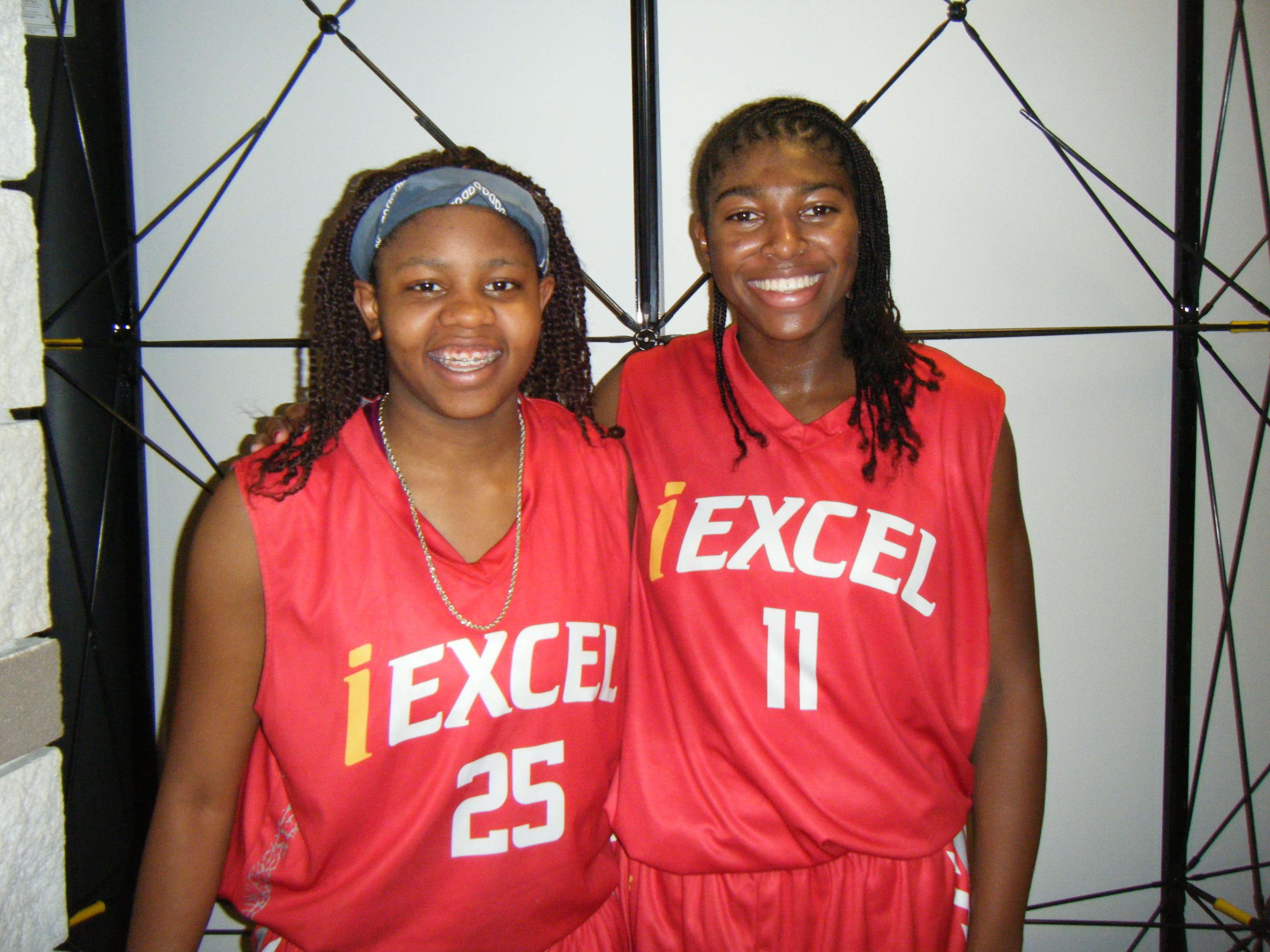 Desiree Elmore and Jocelyn Willoughby of IEXCEL 17U (by Bob Corwin)

Elmore, a lefty orally committed to Syracuse, likes to work the baseline.  She is strong enough to function in the key but has enough range to be a perimeter threat as well.

Lewis is a quality athlete with good grips capable of playing either guard spot.  She can readily attack the basket but also shoot over the top.  One of the top guards still uncommitted in the 2016 class; she has numerous high-level BCS offers.

Having watched this player for a few years, I cannot remember "Mason from Mason," as some call her, having a bad game.  She keeps playing hard even if things are not going her way. More of a long range shooter when younger, now she seems to prefer to drive to the rim or take the mid-range jumper.  Capable of playing the point, she is probably more suited for the shooting guard slot at the next level.  She has numerous offers from modest BCS to mid major on the table.  Her efforts here helped her team win a National Division bracket.

Willoughby plays all over the court, sometimes up top, often on the wing and occasionally inside.  A fine athlete, she can get to the rim but also demonstrated a nice perimeter stroke at the event in helping her team win the overall 17 and Under National Division.  For college, this high major prospect is down to a list of eight that she preferred not to disclose.

Wilmoth is a quality athlete with a beautiful three-point stroke.  On defense, she can block shots.  Orally committed to Dayton, she could work to improve her ball handling/penetration to complement her fine perimeter stroke. 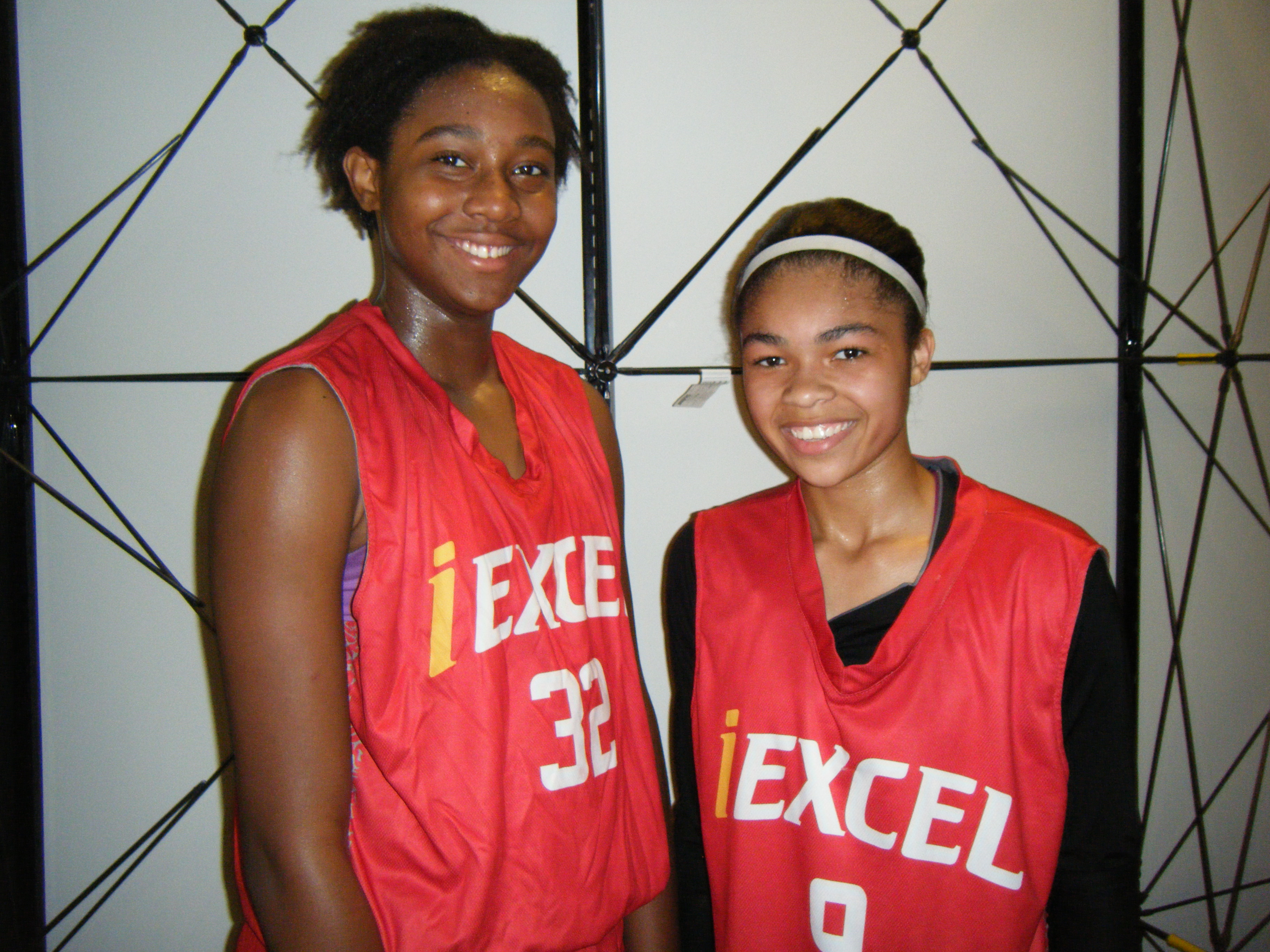 Jazmine Carter and Jordan Nixon of IEXCEL 14U (by Bob Corwin)

Carter is your prototype young athletic interior player.  Her game is in the lower paint and could add more range but plays within herself not forcing bad shots.  This is definitely a prospect worth monitoring from the BCS level down.

Collins is a small guard with nice handles and vision.  That she can successfully shoot from the perimeter has garnered some interest at the BCS level.

Green has a lot of game in that she is a solid passer, moves well, can go to the rim and has a decent mid-range stroke.  She is getting BCS looks but needs to develop a better-left hand dribble and left-hand finish to play at that level.  Her efforts helped her team win the 16 and Under Division.

Jones has a solid frame but still decent mobility.  She showed a nice spin move in the lane.  How high she will be recruited will likely depend on whether she can add more range to her power game which did help her team reach the 14 and Under Division final.

Athletic, Nixon has fine handles, good basketball IQ, and vision.  Her scoring appears to come off penetration.  Building shooting range may be the key element to success at the BCS level where her game is otherwise serviceable.

Smalls loves to drive and drop dimes on the way to the basket but will also finish herself at the rim.  She also can spot up for threes, but her release needs to get quicker. Her passing vision is well above average.  Her efforts helped her team to the 16 and Under division final.  She is worthy of monitoring by schools from the BCS level down.

What might be most impressive about this player is that she is cool under fire.  She has a solid frame with decent athleticism, a good IQ, decent handles and has a stroke that must be respected.   Her name is already on many BCS recruiting charts.

White is athletic with explosiveness not yet fully harnessed.  She has a powerful jumper still under development.  More use of her left hand is needed, but a BCS upside can't be denied.

Jones may not be tall, but she has a strong body for someone so young.  Combined with good handles, she can get to the rim.  She needs to strengthen her perimeter stroke, but there is more than enough game here to merit monitoring from the BCS level down. 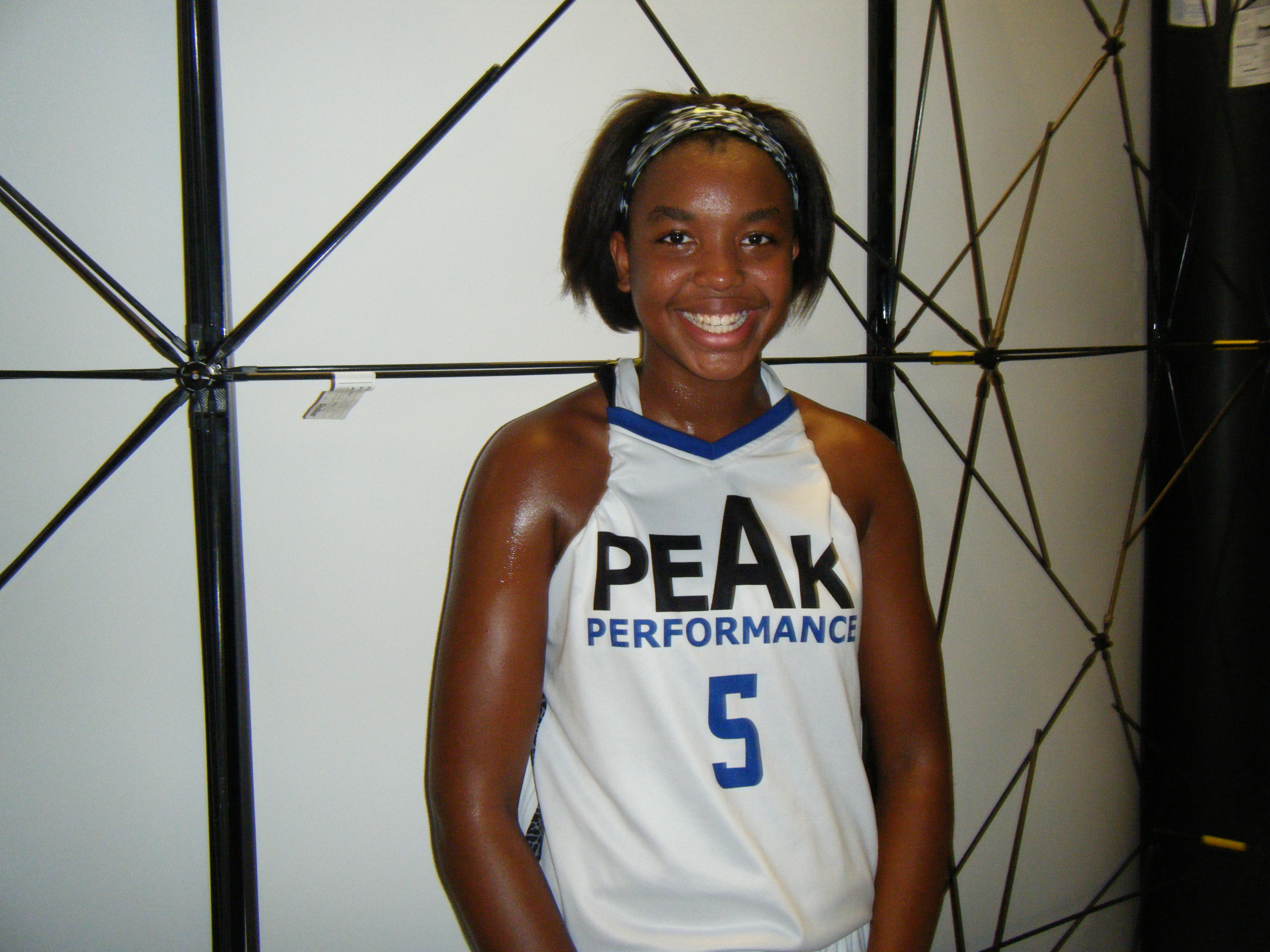 Robinson's name is already on national lists and word in the gym is that she already has BCS offers on the table. She is a strong finisher in traffic in the key but also is an adept passer seeing the court.   Her outside shot needs to become more consistent, but the basics are there.   Here, she led her team to the 15 and Under Signature Division final.

McGee's efforts in the event helped her team win the 14 and Under Division.  Still very young, she needs to grow some or add more range as she currently scores near the rim.  Scoring over 20 points in a couple of games indicates this young player is developing a knack for finding her way to the basket.