In Midwest Showdown 8th Grade Division, there was plenty of talent but the Western PA Bruins - Tate proved to be the best team.

In part one, the tournament background and the Elite Division (link: Stars old and new shine at the 2015 Midwest Showdown (part one) - Swish Appeal ) of the 2015 Midwest Showdown was discussed.  In part two, the talent packed 8th Grade Division is reviewed.  Again if you are looking for strong competition and good bangs for your bucks (five games guaranteed), consider attending next year!

The Bruins were not the most talented team in the Division, but collectively they were the best team, putting winning above individual glory (see write-up below of Makenna Marissa who typified this).   Coaches in this club may come and go but team before individual glory has been a Western PA Bruins trademark for decades!

Picking up the action in...

FBC played this game missing a couple of key players and lacked the firepower to hang with the Bruins trailing 29-18 at the break.  In the second half the Young Gunz hung around but never threatened to take control.  FBC's A.C. Carter (see below) led all scorers with 22 points while the Bruins Rachel Martindale (see below) led the winning side with 19.

Crossover controlled the first half (35-25) being quicker all over the court.  In the second half, Michigan's outside shots wouldn't fall and Indy was controlling the glass, getting second opportunities while handing Crossover the "one and done" treatment.  Jorie Allen (see below) led Indy with 17 points while Michigan Crossover was led by Jada Walker (5-5, guard, 2020) with 13 points.

The Gym Rats fell behind early and never caught up, trailing 34-23 at the break.  Key to the half was Rachel Martindale (see below) making 10 of 11 foul shots while leading all scorers with 15 points.  The second half saw the Bruins' lead mostly stay in single digits but never really be threatened.  Martindale finished with a game high 18 while Indy's Jorie Allen led her side with 13.  No other players hit double figures for the game.

Below we introduce some young players of note.  There were plenty more who probably deserved mention as well!  Players are listed alphabetically with height, position, graduation year and club team; school information as available in parenthesis 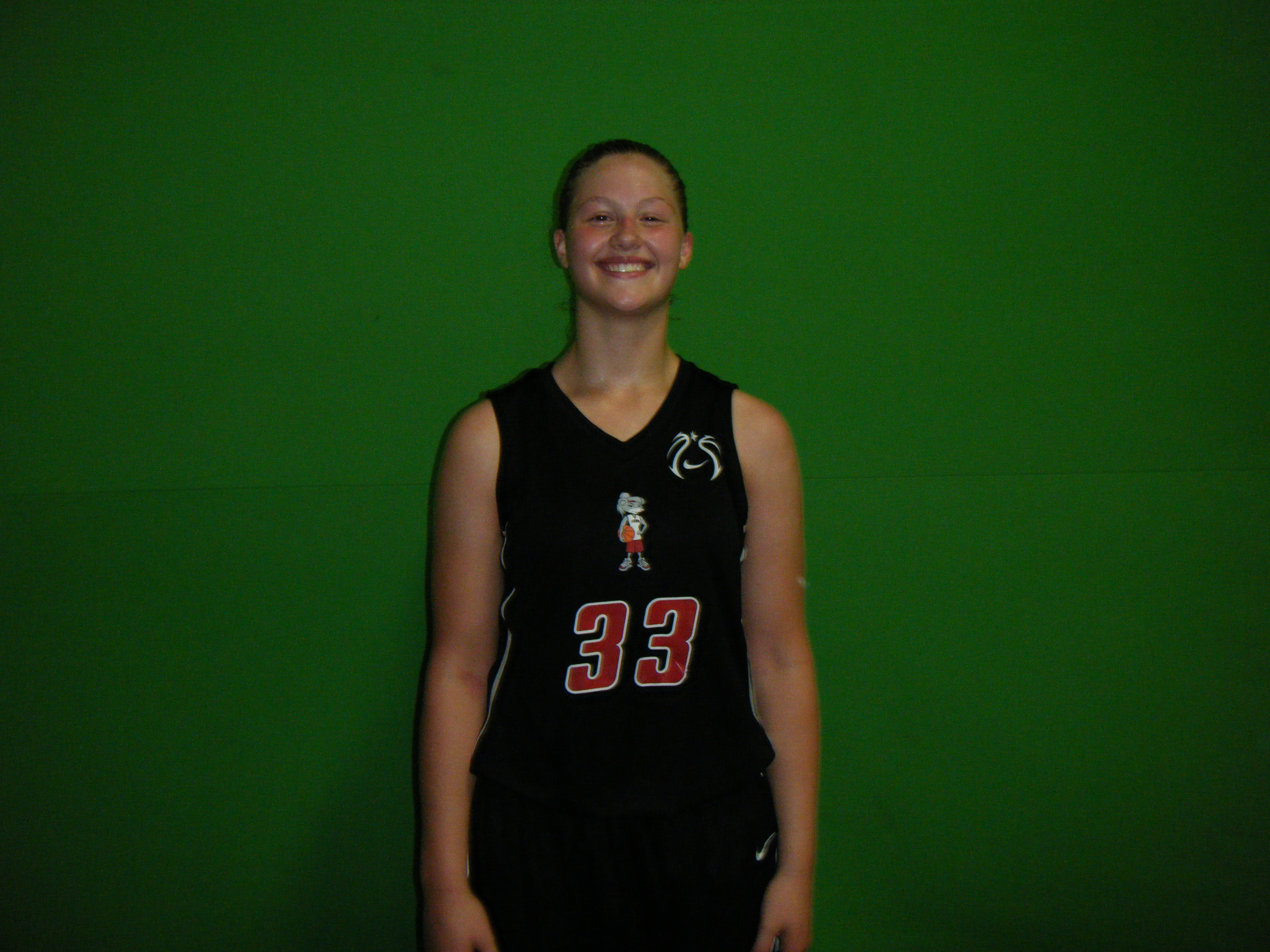 Allen, who's sister will play for Michigan State this coming year, is more strongly built and more skilled than most players finishing grade eight.  She has a nice mid-range face-up stroke and finishes around the basket rebounding well at both ends.  If this event is any indication of her game, foul shooting needs to improve as she missed out on a lot of points at the charity stripe. 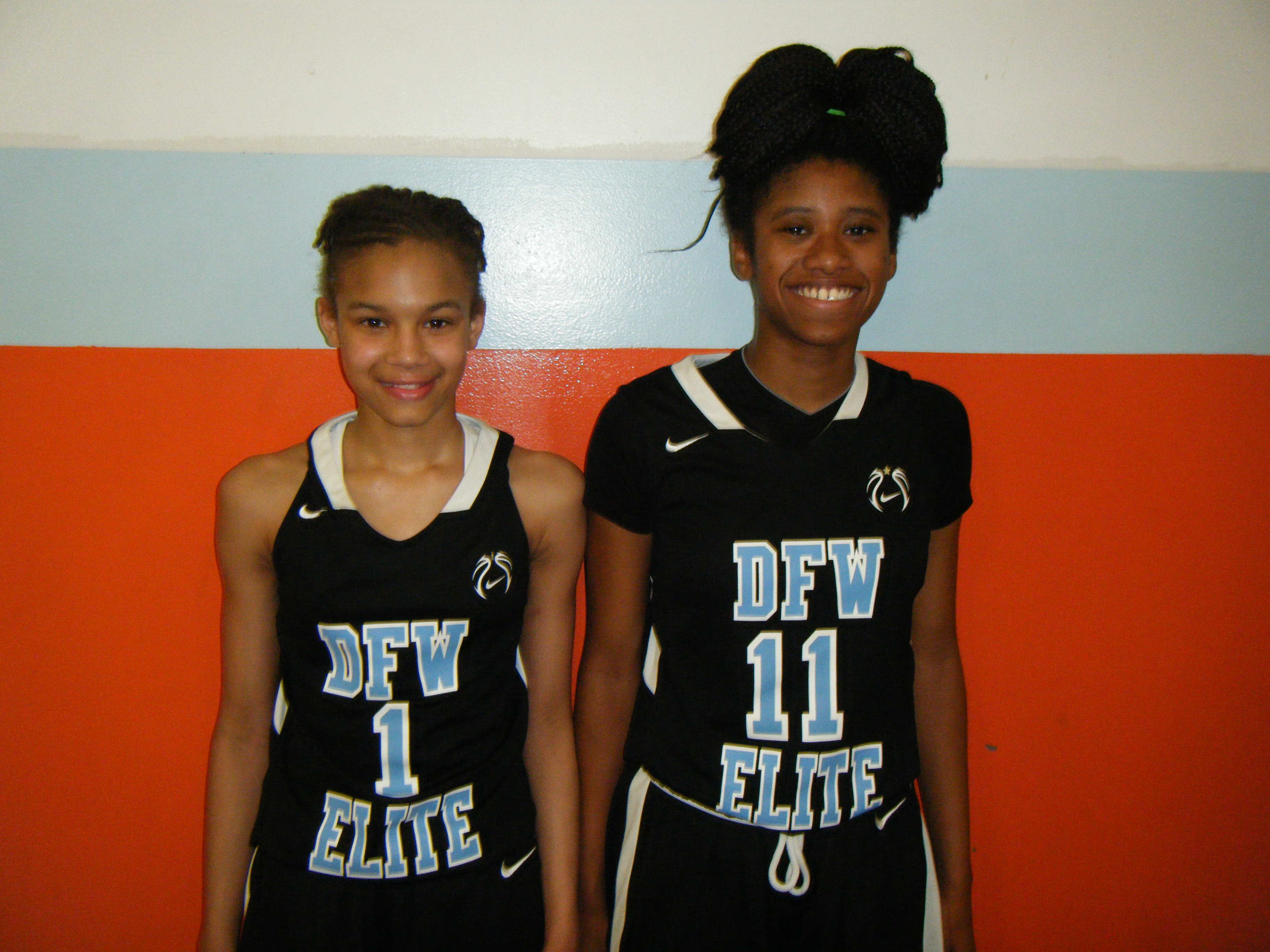 N'yah helped set the tone early teaming with Endyia Rogers (see below) in forcing turnovers to help beat (61-29) Team Takeover 8th grade in the Gold Bracket (second place pool teams) final.  Boyd has a strong motor, decent handles, can drive or shoot the perimeter shot over the opponent.  She still needs to fill out a bit.

A.C., as she is called, is a power package on the middle school level.  She is strong on the glass, doing most of her damage in the key even when she lines up initially on the perimeter.  Adding perimeter range and inches in height are two things that hopefully will occur over the next year or two.

As more scouting services see Davenport, her name only continues to move up the prospects' charts and is clearly high major BCS material.  She handles well for a tall player.  She is a strong shot blocker and rebounder. Offensively, her team needs to go to her more as she posts up.

With height and advanced strength, Eggleston controls most the lower paint in most games she plays in within her age group.  She also is a good shot blocker.  Her final height and whether she adds more range to her low post game will probably determine how highly she is recruited at the division one level.

Laya is one of those active all over the court players.  She is very light on her feet and seems more attack the basket than shoot outside.  Word in the gym is that she is already getting BCS offers, perhaps one from Michigan State where I was told her father is Dean of Students.

With good handles and attack mentality, Horston just keeps coming at the opposition.  If viewing at this event was an indication, she needs to work on building shooting range. 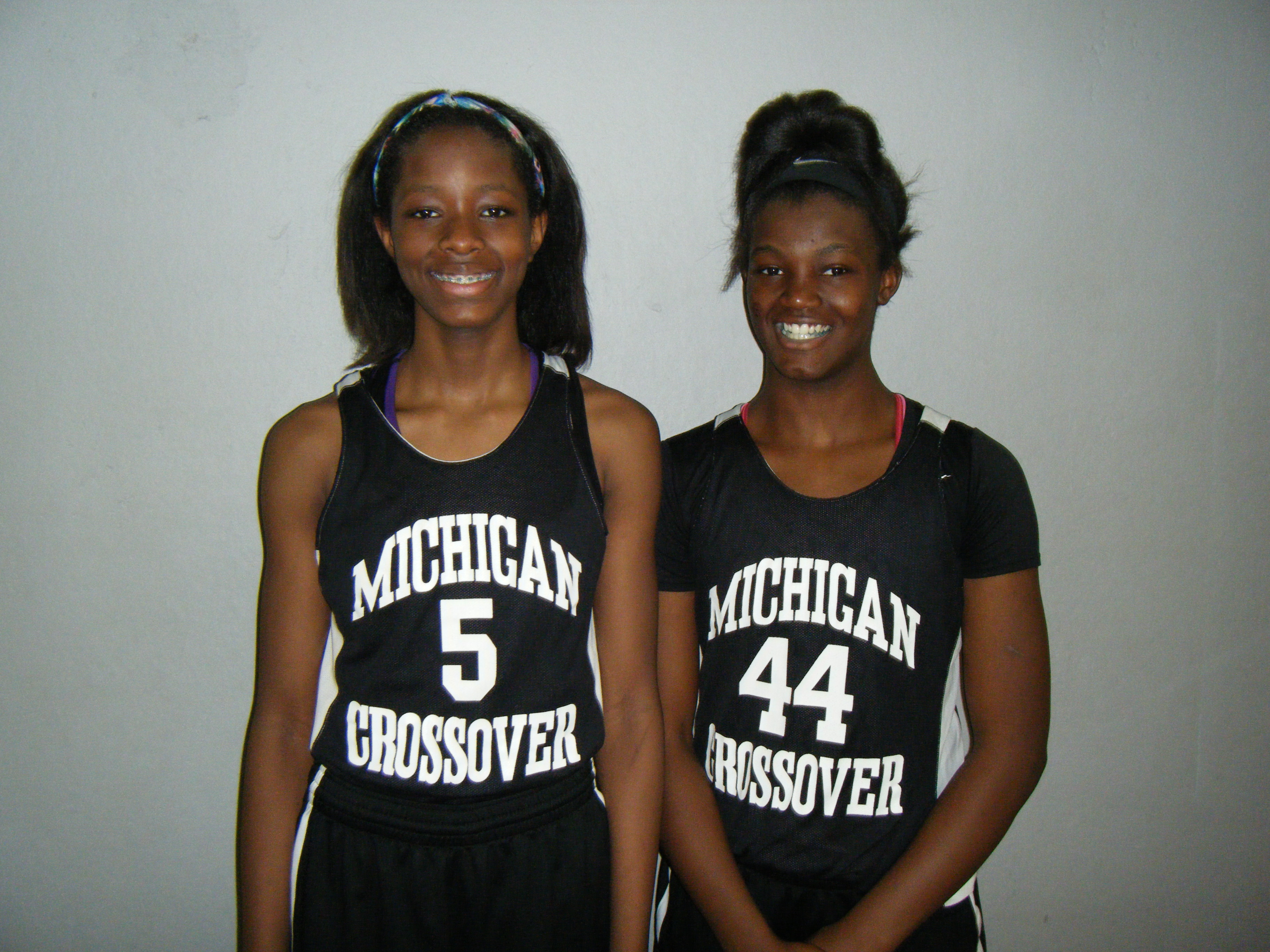 Jackson is one of those players whose size allows her to go inside but whose agility allows her to function on the perimeter from where she is quick to the basket.  Being quick off her feet, she rebounds well.  She does need to fill out some.

Jayla comes from a basketball family where father coaches and sister Raven is a Team Takeover 2016 point guard orally committed to Villanova.  Jayla is an athletic wing player who can shoot the three-ball, sometimes settling too much for the perimeter shot.  At the event, she showed she can attack the basket and with continued progress should get BCS looks down the road. .

Johnson along with Rickea Jackson (see above) formed a one-two punch in a quick-off-your-feet attack in the lane.  Also like Jackson, she needs to fill out.  In a post-game interview, she indicated that given her height, over the next few years she needs to add more perimeter skills to play at the division one college level.

You had to watch multiple games of this team to fully grasp Makenna Marissa 's game.  In some contests, she scored primarily by attacking the basket.  In others, she was setting up a player with a good pass (sometimes one pass away from the actual score [in hockey that can be considered an assist]).  Box scores do not do justice to her contribution in winning the 8th Grade Division at the Midwest Showdown.

Marshall helped her young (primarily 7th graders) team win its pool in the division.  She is decently athletic and has a strong perimeter stroke.  Given her mentality, growing some might be her top priority as she is currently more point guard size but is more shooting guard at heart. 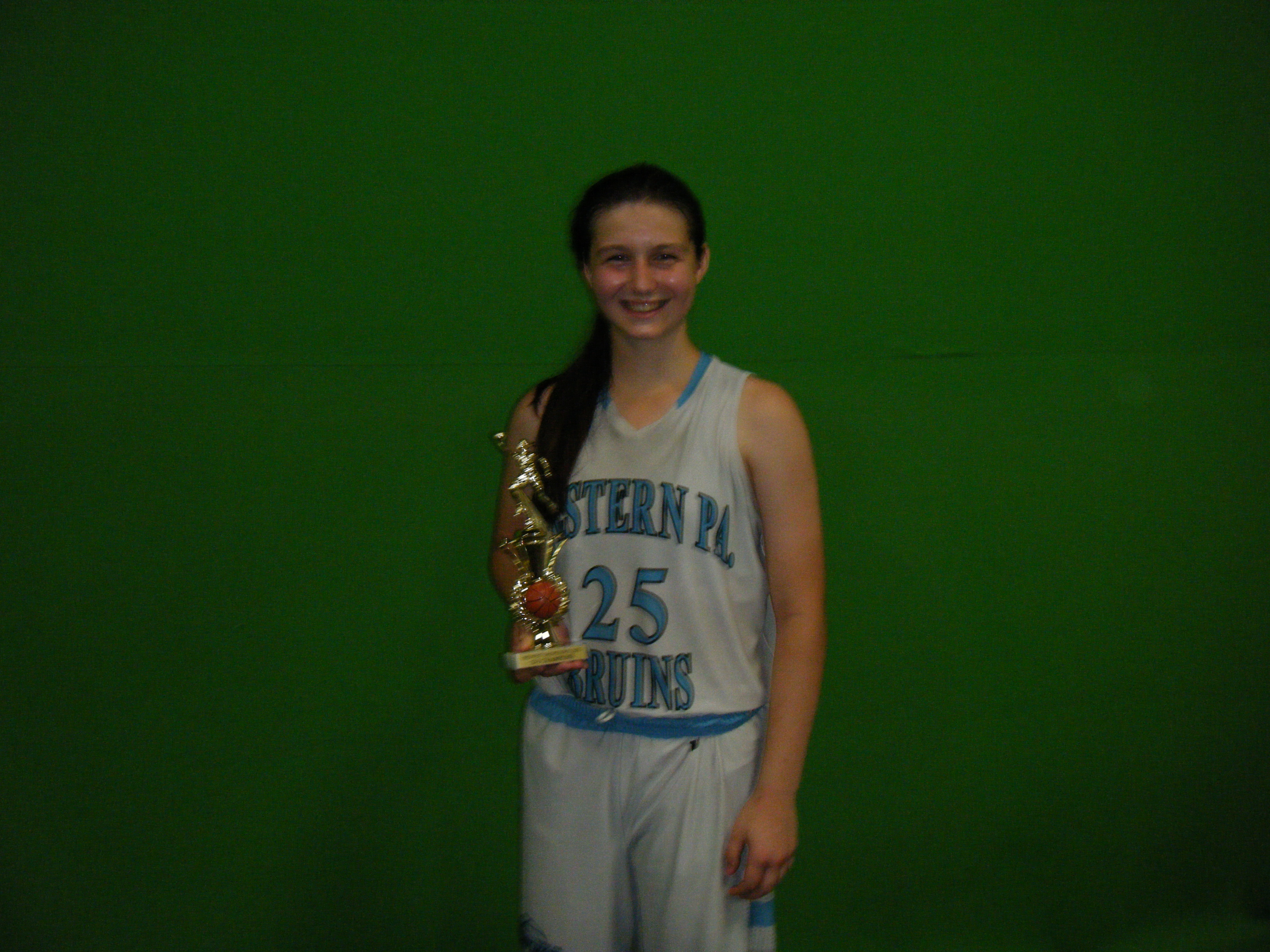 Martindale just scored and scored in this event, 19 in the semi-final and 18 in the Platinum Bracket final. She can hit perimeter shots but seems most willing to take contact hitting 10/11 foul shots in the final's first half.  Her ultimate height may dictate how highly she is recruited but one can't deny she is advanced for her age.

Mingo-Young already has a skill set that will make BCS coaches take note.  She has a powerful jumper, can hit the three (secondary option) and finally has good body control on penetration to the rim.

Nicholson showed good mobility and scoring skills around the basket.  She also gets up and down the court well. BCS schools need to have this name on their recruiting charts.

Parrish is a coach's daughter and she shows it by leading her team from the small forward position.  She has an advanced all-around game for someone so young. Yes, it's early but BCS schools need to be aware of this very young player.

Perry runs well and has a nice stroke seeming to prefer the wing to baseline area. You have to respect her out to beyond the arc.

Rogers may be small but her motor and skills make up for any perceived lack of height. She can hit the three-ball but also will attack off the bounce.

Walker was the other half (with James, see above) of Takeover's perimeter wing attack.  From the back it is hard to tell them apart as they are about the same height and have similar medium-solid build.  Walker prefers the attack to the perimeter shot but can make it at mid-range.   She too should be monitored by BCS programs for maturation over the next few years.