Tampa Bay Invitational 2015 - an exposure event in May!?

The 2015 Tampa Bay Invitational gave a lot of players a chance to be exposed to possible scholarship offers below the division one level.

Share All sharing options for: Tampa Bay Invitational 2015 - an exposure event in May!?

Yes, that is true as a total of 30 NCAA Division 2, NAIA and junior college (mostly from the Southeast) coaches gathered at the University of Tampa on May 16-17 (dead period for NCAA Division one) for the Tampa Bay Invitational 2015 presented by Tower Hill Insurance and put on by the East Tampa Youth Basketball Association.

While there was an ample number of likely future division one signees participating, the event gave a chance for these coaches to evaluate dozens of possible NCAA Division 2/NAIA/junior college prospects with 40 teams (all from Florida) ranging from middle school to rising seniors (class of 2016 plus a few unsigned 2015's) present.

The Future was now in Tampa.

Our Swish Appeal Team of the tournament was Florida Future Elite which posted a 3-0 performance (All games were pre-set at the event.) while playing "small ball" due to the absence of its one post player.  While two players are featured below (also see photo above), it was a true team effort playing against older, taller opponents.

Future had had a strong spring with solid showings at the Boo Williams Nike Invitational in April and more recently at the Peach State Basketball May Day Challenge held in the Atlanta area.

Here is a look at some of the top performers at the event.  Players are listed alphabetically within graduation year giving height, position and club team, school data in parenthesis.

Maybe the best way to describe Abney's game might be to say she makes plays.  One time it might be a spin move to the basket.  Another time she is taking a mid-range jumper.  At the other end of the court she is a solid defender.  She already has a wide variety of division one offers to choose from although no commitment has yet been made..

Being a competent rising senior not on CFE's Nike League team, Hatcher gets plenty of playing time.  Unfortunately, college recruiters, many of whom often tend to spend much more time looking at a club's top team in an age group, can easily overlook a division one prospect like Hatcher.  Daniella, with a solid frame and adequate athletically, plays with good focus, has a strong drive move going to her right and a nice mid-range shot.  She should be getting more division one interest than indicated by speaking with her.

In watching Flores this spring, she is like the mailman in that she continues to deliver, here helping the Lightning post another undefeated weekend.  A small shooting guard, Flores has learned to get a feel for when she is open and release her three-balls quickly.  At whatever college level she signs (height as a shooting guard being the biggest issue), at the least she should be an effective zone buster. 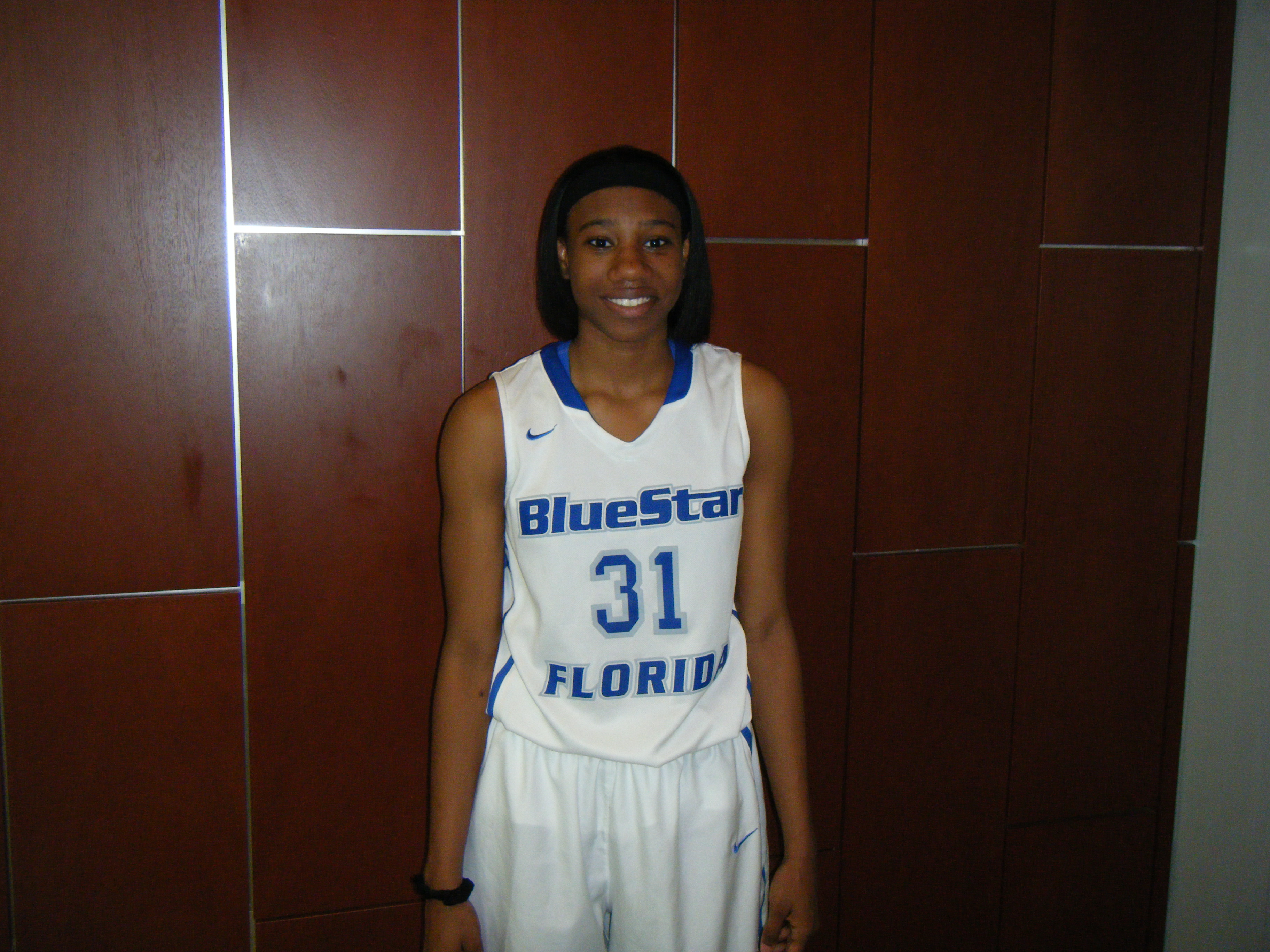 Meertens qualifies as one of those good athletes with good motors. Offensively, she is more driver than outside shooter but can shoot the 3-ball enough that you must guard her behind the arc.  Still this area could be more consistent.  A good defender, her hands are strong in that she can rip balls out of an opponent's grasps.  Already getting non-BCS Division one offers, she should be monitored by BCS programs for continued improvement.

IMG National competed but came up short of a victory in Tampa.  Don't blame this young Russian who put up several double digit showings rarely leaving the court!  Not a special athlete, she makes up for it in good basketball IQ, motor and anticipation.  Shiskina hits the boards well (embracing contact) for her size and is often found on the floor in a pile-up or diving after loose balls.  Her favorite move is an up fake and drive to the rim.  Her intangibles outweigh what some might question as a need to be more athletic.  As the saying goes "she is better than she looks."   Hopefully, scholarship offers will be there for her when the time comes.

Cloutier already had her first division one offer before playing her first high school game this fall.  More options are sure to follow.  She is well rounded in scoring ability (threes, mid-range pull-up and drives to the rim).  She is a good passer with good basketball IQ in Tampa posting multiple double digit performances. As to improvement, more use of left in attack and finish at the rim are areas which could stand addressing.

After one season of high school ball, Henderson is considered one of the best guard prospects in the nation, not just in the South.  She scores the ball well enough to play "the two" but handles well enough to take care of point guard duties. She can explode to the basket to score or dish off. The word in the gym this weekend was that she will be trying out for the USA 16U team in Colorado this coming weekend. 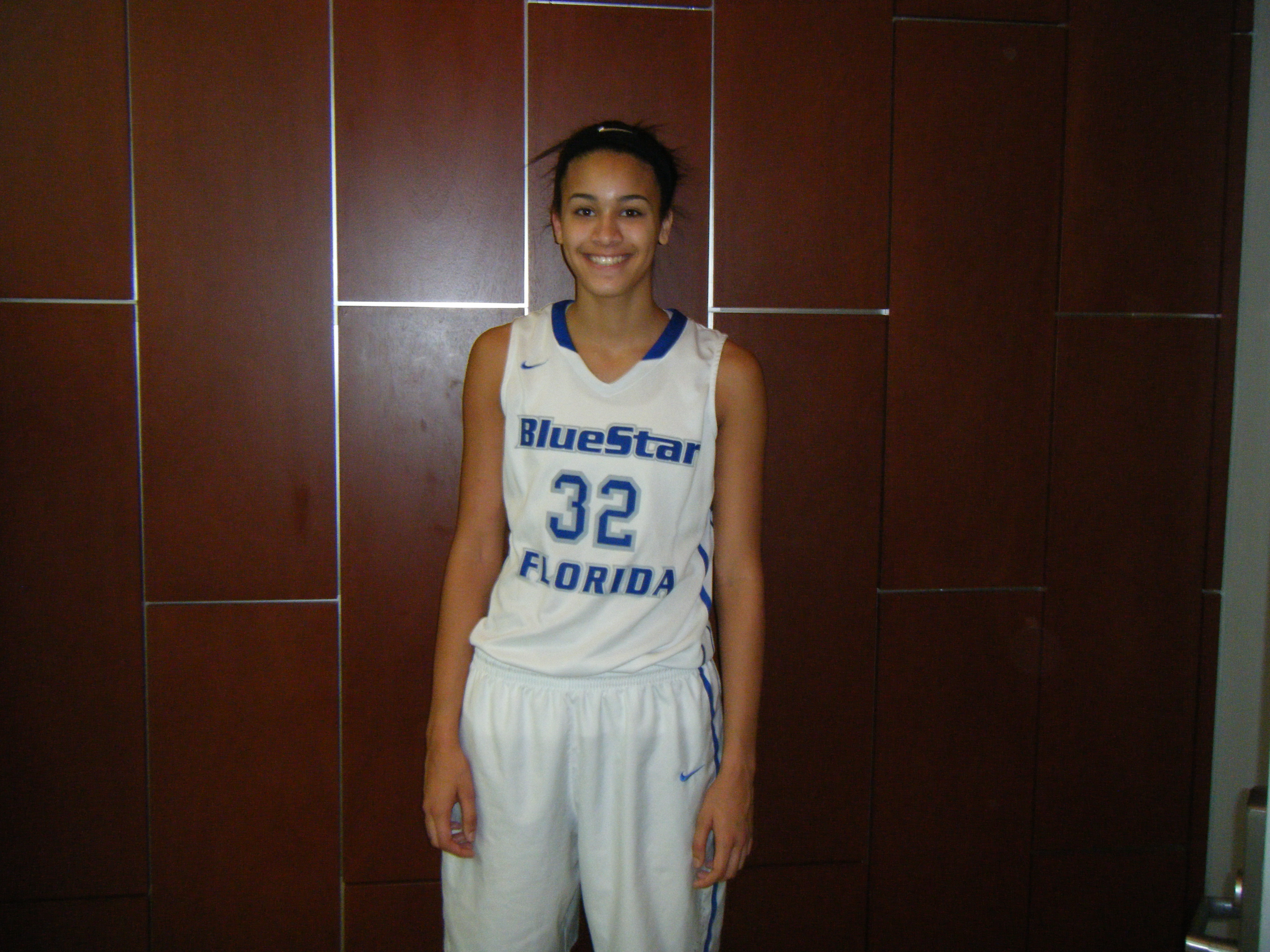 One thing that separates Smith from other young post players is that she can already put the ball on the floor for a short drive to the rim. Another plus is that she can finish with either hand at the rim.  Obviously, her skills still need to improve in developing more post moves and range but with what she brings to the table (decent foot speed another plus), her progress needs to be monitored from the division one BCS level down.

Bartram, a coach's daughter, has an advanced understanding for a young player.  She got meaningful time in her high school's run to the Florida 3A state final.  She is a deadly spot up three-point shooter hitting seven and eight in two recent games.  She appears to be working on improving her shooting coming off the bounce rather than just the catch and shoot variety of baskets.  Currently a qualified zone buster with decent size, her goal over her high school career should be to add more variety to her offensive game.

With a nice medium-solid build, Kennedy is very mobile but stronger than most her age.  She can score via drive primarily going right but also spot up on the perimeter even to beyond the arc.  She has good vision on the break thus can start one or finish it.  She still needs to tighten up her handling of the ball which showed a high bounce or two during one viewing.  Kennedy's choice of high school has not come public as yet but division one coaches from BCS level down should be monitoring this player's progress.