There was plenty to see at AAU's Spring Fling 2. The very young talent was particularly noteworthy.

Share All sharing options for: Spring Fling 2 - Youth Be Served

With 121 teams exclusively from the State of Florida, there was plenty of action to follow at AAU's Spring Fling 2 club basketball event held near Orlando, Florida, at Disney's Wide World of Sports over the May 8-10 weekend.  Being in the non-viewing period, no division one college coaches were present and few, if any, of the division 2, 3 or junior college variety.

A quick look at some of the various divisions results:

The shocker here was the semifinal elimination (see more below) of Central Florida Elite's Nike EYBL team by Essence Black (a reserve Essence club team).  With an all-Essence final looming (the Purple [Nike EYBL] team cruising to the final), the club decided not to play the championship game.

The Lightning (which went 3-1 at the Deep South Classic in April) is the only team to beat FGB 2017 (which won its bracket in the Deep South Classic) and now takes this title.  Essence 2017 had made a good run at the Boo Williams Nike event in April. With these results, Lightning Select can at least for the moment claim to be the best Florida club team in the category of rising juniors (2017) and younger players.

With several division one prospects, TBI won easily leading 24-10 at the half.

The Warriors, composed of eighth graders mostly from the Boca Raton and Coral Springs areas, only trailed 23-22 at half.  In the second half the younger but taller Titans dominated play with size and athleticism.  This Titan team, mostly out of the Melbourne area, was playing up a year as it had been dominating its age group in-state competition.

Here is a look at some of the top performers at the event.  Players are listed alphabetically within graduation year giving height, position and club team, school data in parenthesis.

Gordon is a good athlete who made big shots in helping her team upset (53-42) Central Florida Elite's EYBL (top) team.  Although a shooting guard, her ball handling appears to be improving.  She is justifiably getting division one looks.

For a long while, Moore has been able to finish near the rim and block shots.  At this event she was running the court better and finishing on the break with greater agility than seen in the past.  She has made an oral commitment attend to Bucknell University.

At Disney World, Hair was a tireless, blue collar worker for this Lightning team. In the semi-final win over Team Breakdown Black, she posted a double double in points and rebounds.  In the 50-44 final victory over Essence 2017, Hair put in 10 points and again battled hard in the paint.

Lee is an explosive lead guard who can go strongly to the basket.  A good athlete she plays hard on defense,  While not her primary scoring option, he can hit the three-ball. 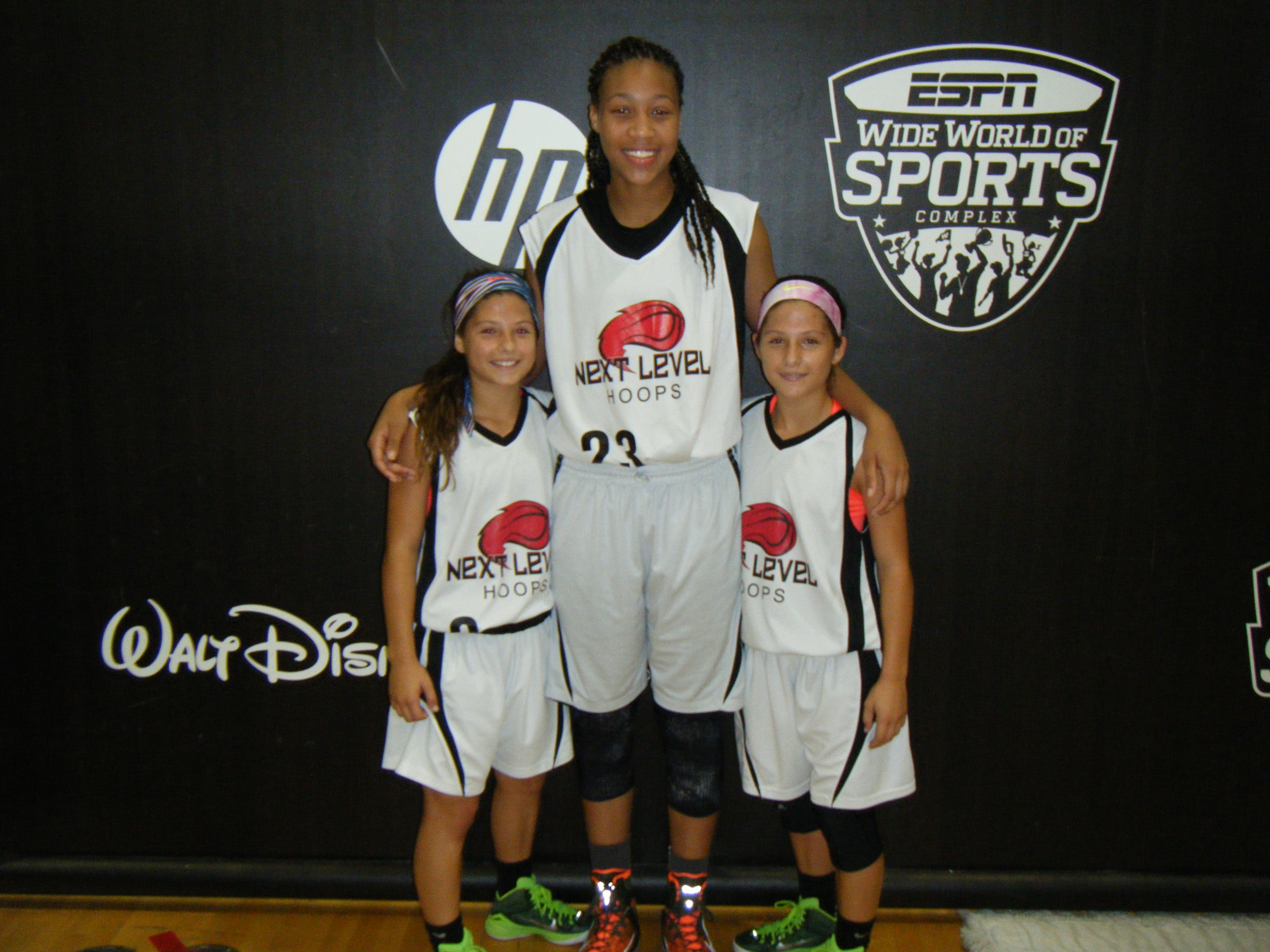 Williams's evolution from center to forward continues to be impressive.  While still able to post up, over the last year she has added stylish passing to her post game.  She now can even lead the break dribbling the ball or sending it forward to players closing on the basket.  Her recent play in the late April evaluation period has her drawing offers from the top programs in the country.

Trivia question: In the adjoining photo, LaDazhia Williams is pictured between her diminutive twin freshmen teammates Emma (#3, touch taller) and Sarah (#2, the point guard) Fazio (both feisty in on-court nature).  From looking at the photo, try to guess the height of these twins!  Answer is below.

Glenisha suffered the dreaded ACL injury about a year ago.  She is making progress toward the level that had her in the discussion of being one of the best prospects in Florida's 2018 class.  She passes well and has decent handles for a big guard.  However, she still appears to be tentative as to putting too much pressure on her repaired knee, taking floaters in the lane rather than stop and pop jumpers.  A division one prospect regardless, we all need to give her more time before passing judgment on where she will best fit at the next level.

Sieper is one of those non-flashy blue collar post players.  In her team's 47-24 final's victory over the Delray Blazers, she tallied 12 points.  She runs the court adequately finishing with either hand near the rim. If doubled, she will dish off to open teammates.  A division one prospect, it will be interesting to see how her game will progress over the next few years.

Vega has the size and thick build of a future division one post.  Her hands catch the ball well enough and she gets up and down the court adequately for her build.  Bodies tend to bounce off her in action in the key as she is hard to displace.  She just needs to mature her low post moves and watch her conditioning.  BCS schools should be monitoring this player.

Brown has good handles for such a young player and made some "how did she do that?" passes at the event. Athletic, she scores primarily through penetration with perimeter stroke (like so many lead guards) needing work.   Division one schools should be monitoring from the BCS level down.

Simmons has good speed and quickness but unlike so many young athletes who just penetrate, she can really shoot the perimeter ball hitting four three's in one game observed.  Her handles are respectable.  She can run the point position but may be more suited for the shooting guard (in spite of relatively smaller size) slot given her mentality.  Division one schools should be monitoring from the BCS level down.

Ellis mad a big splash last year making several cuts as the youngest (sixth grade at the time) player at the USA Basketball 16U team trials.  At Disney World, she showed a decent mid-range stroke but her on-court toughness and awareness were most impressive.  She played on her varsity high school team this past year and should be on division one watch lists from the BCS level down.

Burks does not look or play like your average sixth grader.  She runs the court well, blocks shots and can finish around the basket be she still no finished product.  She understands to pass to open players if doubled.  In spite of her age, she is already attracting BCS interest.

Peaks led her team (sixth and seventh graders) with 19 points in her team's 52-43 final victory over the South Florida Warriors.  While she can score via the drive or the three ball, she readily shares the rock as well.  She will need to get stronger but the biggest question for her future may be how tall she gets.

Turral played varsity high school ball this year.  Coming off the bench for a ninth grade club team, this sixth grader's aggressive play turned around the one game in one pool play that I witnessed.  She has a perimeter stroke that needs to be respected but it was her pressure on defense and motor that most impressed.  As just above, the biggest question for her future may be how tall she gets.  The rest of her game is coming along nicely.

Answer to trivia question: The Fazio twins are 4-10 hoping for late growth spurts.