Wrapping up our look at statistical indicators for the 2015 WNBA (just in time!), we look specifically at mid-major prospects who might have a chance of cracking the draft order and maybe even making a roster.

As a 6'0" point guard who had just helped her team to the second round of the 2014 NCAA Tournament before losing to eventual champion UConn, Cloud seemingly had all the raw tools to make it at the next level.

Statistically, Cloud's basic stats probably didn't leap off the page at anyone, but her efficiency numbers were solid. If you put any stock into the idea of assist percentage meaning something for point guard prospects, Cloud was eighth in the nation (for reference, Southern Mississippi's Jamierra Faulkner ranked second in the nation last season). Sure she had flaws — she wasn't a particularly great shooter or rebounder for her size — but a 6-foot point guard heading into a weak 2015 draft was intriguing enough to consider worth watching throughout her senior year, at the very least.

But Cloud had one dark cloud hanging over that overshadowed much of that success: she plays for the Atlantic 10's St. Joseph's Hawks, a mid-major program. And unfortunately, mid-major prospects haven't been all that successful in recent years.

To put that claim in perspective, Jamierra Faulkner was just one of three mid-major prospects selected in the 2014 WNBA Draft and the only one to make it (in fairness, BYU's Jennifer Hamson returned to school to finish out her All-America volleyball career this season). In the previous draft, Delaware's Elena Delle Donne (2013) was the only mid-major prospect selected in the entire draft, and she was a UConn recruit (which says it all in women's basketball). Four mid-major prospects were drafted in 2012, but none lasted the season.

If you want to go back to 2011 — almost a banner year for mid-major prospects in recent years with two being selected in the lottery — only one of the six selected (Courtney Vandersloot, Gonzaga) remains. And 2010 does boast Alysha Clark, but she didn't make a roster in her first two attempts after being drafted.

In summary, that's three mid-major prospects making a roster and surviving in the WNBA in the last five drafts.

And unfortunately, Cloud has one more knock against her: she played for a losing team.

The importance of winning

An interesting subtheme in looking at the prospects for this year's draft is that there are a few who played for losing teams either in their senior years or throughout their careers: Cloud; Crystal Bradford, Central Michigan; Chelsea Gardner, Kansas; Dearica Hamby, Wake Forest. And it's reasonable to wonder how much that should matter in one's evaluation of them: in theory, having a professional-caliber player on your team should result in a winning season, at the very least, if not a playoff berth.

The statistical framework for mid-major prospects 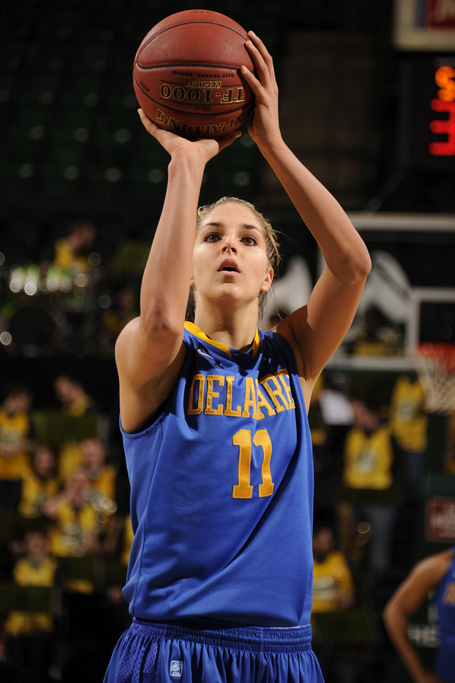 Reviewing what we discussed last year, a few resources to better understand the recent history of mid-major prospects:

Whether that applies to major conference players in any way is a question I've never seriously explored, but it definitely matters for mid-major prospects.

In the past, I've mentioned two main criteria for mid-major players to succeed:

1. They have to have a Marginal Victories Produced rating of 14 or above, which essentially rewards dominant players on dominant teams: pros are not just "talented", they're the best of the best and absolutely should dominate lesser competition.

2. They really can't have any red flags mentioned about major conference prospects: It's not just that they have to be truly elite prospects, but the mid-major prospects who have made it were historically good and near flawless prospects in the NCAA.

Wrapped into that first point is that they have to win: the formula is a weighted ratio of the statistical value they contributed to the differential between their team in their opponent. In other words, it's a measure of how responsible a player is for the differential between their team and their opponents. If they're playing for a losing team, it becomes extremely difficult to meet the threshold that other mid-major prospects have reached using that formula: a crude summary of the reasoning might be, if you can't turn a NCAA mid-major team into a winner, what makes you think you can contribute to the success of a WNBA team?

As harsh as that standard sounds, players beneath that level aren't even getting a chance to make rosters.

For Cloud in particular, her team's record looms large as one of the biggest knocks against her was that she didn't impose her will on games as much as she should have. During a game against Duquesne this season, the commentator spent a possession or two talking about the need for Cloud to assert herself after lauding her willingness to play within her team's system — as he said, there are times when a player with her size and triple-double ability should be able to take upon herself instead of deferring. And her middling usage rate is a prime example of that: even as a point guard, there's no reason why a player of Cloud's talent shouldn't have a usage rate higher than she did this season

As discussed multiple times at length already, successful WNBA point guard prospects usually had NCAA usage rates above 24%; Cloud's 22.9% usage rate this season was a career-high. All of that would compound any concern about her not playing for a winning team.

Yet Cloud does have a few things working for her: she's still a 6-foot player with point guard skills. She improved her 3-point percentage from 27.9% in her junior season to 35.1% this season, which might hold some promise for future improvement. Synergy Sports rated her as a below average defender, but that might be a correctable problem as she had to take on so much of the offensive load and can sometimes be caught standing straight up on defense.

She has the tools and in a weak draft, gambling on tools is as good a bet as anything else. But does she meet that somewhat lofty statistical standard?

For this year's analysis, I didn't pull from national awards, stats, or mock drafts but instead the recommendations of others: Bob Corwin's analysis of prospects from last night, the rosters from the 2015 Tampa combine, and a player who I saw play one time who I just never forgot about. The following is the alphabetical list of players I ended up crunching numbers for (with links to their WBB State profile page):

And the following is what the numbers say:

Trust me, some of those numbers surprised me too...so let's run through a few of the top candidates:

Cheyenne Parker is a fascinating prospect: as Corwin wrote, "At 6-4, she is highly athletic and could go higher (than the second round) if a GM wishes to take a chance that those (off-court) issues will not reoccur." With her size, athleticism, and an outstanding 18.31% offensive rebounding rate — a skill that translates well to the pros — Parker might be the closest thing to a "sleeper" in this draft. The knock is an extremely high 16.8% turnover ratio, which contributes to that negative PPR and doesn't bode well for her holding on to the ball against pro competition.

The reason why Parker is rated below 14 though is almost entirely because she missed 12 (more than a third) of her team's games due to disciplinary issues — hard to contribute when you're not there. But since we're mentioning people whose numbers are affected by missed games, how about Crystal Bradford? It becomes less surprising that she's at the very bottom of this list when you consider that she missed eight games, but the bigger problem there might be what Corwin noted about her: "...she can at times be a high volume shooter...": Bradford missed 89 threes this season and has an extremely low free throw rate for someone with her physical gifts. Are those correctable problems? Sure. But she might be more of a risk than she's given credit for.

So as it turns out, Natasha Cloud just misses the historical cut — and really, that's just the cut to exist on a roster for the summer after graduation — but she still has those strengths: size, passing efficiency (PPR), and an improving 3-point shot. The problem is that red flag of the middling usage rate.

D'shara Strange is a point guard who I saw one time back in 2011 in San Francisco and I think this quote from her coach sums up what stood out to me:

"D almost hit her head on the rim but missed the ball," said coach Jamie White of one rebound that Strange went up for maybe a bit too high.

Strange is one of those high usage point guards who knows how to use her athleticism to score and rebound, though you might hope her passing and shooting efficiency numbers were a bit better. But in a draft full of gambles, especially among the mid-major set, those kind of athletic tools might be worth a look. The fact that she was invited to the Tampa combine according to Samuel G. Mustari of the Greeley Tribune (though curiously not on the published rosters) means that someone out there knows who she is and she had the opportunity to make an impression on WNBA general managers.

What might catch the eye of a WNBA general manager is that she led the nation in block percentage this season at 12.74% — to put that in perspective, it's higher than either 2014 prospect Jennifer Hamson (9.93%) or 2013 prospect Brittney Griner (9.77%), who you might have heard of. That's extremely impressive and there's no question that she had an impact on the floor when you watched San Diego play.

The problem with having that as a dominant strength is that a) she's only 6'3", which means it's not clear that she'll be having the same kind of raucous block parties in the WNBA and b) it's not really even clear that shot blocking even matters at all in terms of landing a player a roster spot. And while her rebounding numbers are a huge plus, her low scoring efficiency and a turnover ratio of 14.8% are reasons for concern.

In any event, Ederaine had the opportunity to show off her talent at the Tampa combine so it will be interesting to see if she made enough of an impression to get drafted.

The cream of the (mid-major) crop

And then there were two.

Like Ederaine, Vicky McIntrye's shot blocking was a major strength, as she was eighth in the nation at a whopping 10.06%. Combine that with a strong offensive rebounding rate and decent scoring efficiency numbers (a 55% true shooting percentage isn't too bad) and you have the makings of a solid prospect on paper. And if she adds 3-point range, as alluded to by Ben Johnson of the Tulsa World, she'd be an even stronger prospect.

The only real reservation about McIntyre is what Corwin mentioned: "At 6-7, McIntyre has presence but she greatly lacks mobility."

But Alex Harden looks like the strongest prospect on this list based on the numbers alone. She's a very well-rounded wing who helped Wichita State get to the NCAA Tournament three years in a row. As Corwin notes, a 3-point shot would really round out her profile, but there's a lot going for her.

Ultimately though, these numbers don't seal the deal for anyone — whether you rate as highly as Harden or McIntyre or as low as Bradford. The bottom line is that there is an extremely high standard for mid-major players to make the WNBA, whether that be due to lacking depth of talent in the women's college basketball or a matter of general managers' tastes.