The John Anderson Division saw Bellevue (Washington) High School defeat Oaks Christian High School of Westlake Village, California, by a score of 44-39.  The Anderson was seeded as the second strongest division in the 2015 Nike Tournament of Champions.

When you can only put 16 teams in a division and have 30 or more quality teams, obviously not every team can get placed in the top (Smith) division of an event.  The top finishing Anderson teams certainly have arguments that they should have been in the Smith.

With the quality as high as it has been in recent years, the Nike Tournament of Champions bracketing committee had to agonize over whom to place where.  While in hindsight mistakes were made, the overall placement of teams was well done.  Again (like the Smith Division discussed in part 1), the event was held in Gilbert, Arizona, from December 18-22.

On to semi-final action...

This was a battle of who was colder shooting the ball in the second half.  The margin at half was just three (26-23) favoring Oaks.  The third quarter saw Harrison's man to man defense hold Oaks to four points giving the Georgians a modest 35-30 lead.

This was a close affair most of the way, putting a more physical but younger Brentwood Academy versus an older Bellevue squad with two veteran Power Five signees.  For much of the game, the flow depended on whether Bellevue hit its perimeter shots versus Brentwood's more balanced attack was prevailing.

At the half, Bellevue led 28-26. In the third quarter, Bellevue was hitting shots and Brentwood errors were turning into easy baskets, advantage Bellevue 50-41 after three periods. The Tennesseans refused to quit with the lead 62-59 at the 1:39 mark.  Bellevue had been settling for and missing quick perimeter shots.

This final was closely contested (five ties and five lead changes in half one) into the second quarter.  The play was relatively non-physical with both teams appearing out of gas for much of the contest.  By half Oaks had opened a 24-17 lead largely based on Sydney Boyer's 12 points.

A tech and then fourth personal sent Boyer to the bench with 3:12 left in the third with her club leading 29-22.  By the end of the period, Bellevue had cut the lead to 29-28.  Their momentum continued into the fourth quarter seizing the lead for good early in the final stanza.

While not particularly physical, Bellevue played more intensely on defense covering the Oaks shooters much more closely than in the first half.   The feel down the stretch was that Oaks was further behind than the scoreboard indicated as points were now hard to come by for the Californians.

Below are the John Anderson Division All-Tournament Team selections in alphabetical order (with listed height, position, graduation year and school plus school location in parenthesis).

Berger is a player who appears to be adding more skills. Known for a good stroke and strong, mobile body, she is improving her handles and ability to create for others, playing in and out of the paint. One 26-point performance at the event had Power Five observers itching to pull the trigger.

With her size, Boyer can play in and out of the paint.  In the final she hit four threes while also hitting shots within the key.

A Washington State signee, Campbell, a lefty, is a wing shooter with good length, three-point range and a willingness to play within the system.  She was one of Oaks leading scorers in the event.

Harvey is a good athlete who appears to like to play along the baseline. She will take the perimeter setter or attack the rim.  She already has Power Five offers.

An Arizona State signee, a 28-point finale (giving her team a 2-2 result) in the event, cemented Richardson's slot on the All-Tournament team.  She can attack the basket but also has solid perimeter stroke together with a good basketball IQ.

Slocum was truly one of the most exciting performers at the TOC.  A Maryland signee, she may be the most entertaining lead guard in the 2016 class.  Some of her creativity was jaw dropping, even if not always resulting in points.  Combined with her floor play and a couple of 20+ scoring performances, she earned an All-Tournament slot even though her team finished 1-3.

Streun was the muscle on an otherwise finesse-oriented Bellevue squad.  Time and again, she dug out rebounds to extend possessions or send her team going in the other direction.  The Portland State signee also had multiple double-digit scoring performances at the event.

Styles, highly athletic with a major league upside, earned All-Tournament honors with a 12-point outing in helping her team go 3-1 thus winning the consolation portion of the Anderson Division. Getting Power Five offers, she handles the ball some on the perimeter but currently scores primarily mid-key and in.

Vigil is your "no fear" undersized post, who makes up for height with muscle, physicality and a determination to score and rebound in the paint.  Her efforts helped Highlands Ranch to finish fifth (going 3-1).

Wiggins is an athletic slasher with good focus. Getting Power Five looks, she needs to become more consistent shooting the perimeter shot.  In the event, Harrison's fortunes seemed to be tied closely to how Wiggins played.  Since finishing third (3-1) at this kind of event is an achievement, Wiggins earned her All-Tournament selection therein. 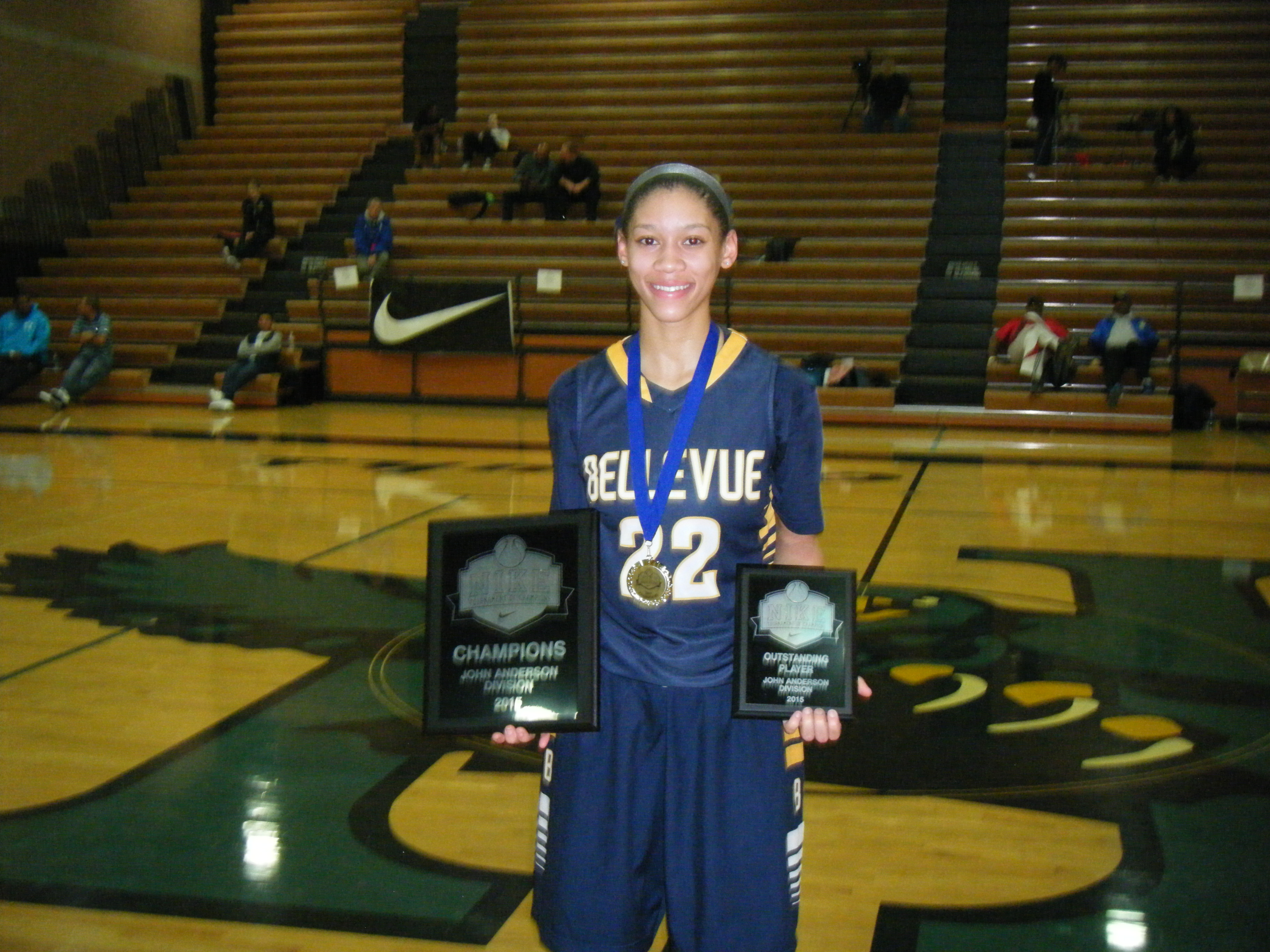 Christmas came early for Bellevue Coach Leah Krautter when the Wilson family decided to move west from Virginia for Anna's senior season.  The word was that they wanted to be geographically closer to her brother Russell (Seattle Seahawks quarterback).  Anyone who doubts this close relationship, please see Russell's recent tweets with almost same pictures as in this article.

A Stanford signee, Anna was a constant in handling the ball for Bellevue.  Her value to maintaining offensive flow quickly became evident when she left the game.  Offensively, she led her team in scoring in multiple games via drives and three-point setters.  Her combined efforts garnered her Anderson Division MVP honors.