Share All sharing options for: 6'10" Felicia Aiyeotan, top players showout at She Got Game 2015

Washington, D.C. -- The Seventh Annual She Got Game Classic presented by Shot Doc Nation was held December 11-13 at four sites in Washington, DC.  Woodrow Wilson High School served as the headquarters site for most of the featured match-ups in one of its two gyms.

Ninety-three teams from fourteen states played one to three pre-set games.  Over one hundred colleges (mostly division one schools from along the east coast and the Midwest) attended, at least, one of the three days of the event along with representatives of all major national scouting services and several regional ones.

Paul VI High School and Riverdale Baptist School posted wins over McEachern High School (GA) and Miami Country Day (FL).  Both defeated teams are defending state champions and considered amongst the elite in their respective states again this year. Thus, these wins should look even better on the victors' resumes as the season moves forward.

Paul VI will be headed to the Naples (FL) Holiday Shootout, an event with a national-level field held after Christmas.  Next stop for Riverdale Baptist will be the Nike Tournament of Champions (which should be the toughest competition amongst all pre and post-Christmas tournaments) in Arizona. After Christmas, they head to the Boo Williams Christmas Tournament in Hampton, Virginia.

National Christian Academy (NCA) posted three wins at the event including highly talented IMG Academy (FL), Ursuline Academy (generally one of the best teams out of Delaware) and St. Anthony's High School (one of the best out of New York City over the last few years).  NCA should be well challenged in the strong Title IX Tournament held in DC after Christmas.

The loud sucking sound around the DMV, Maryland in particular

Over the last few weeks I have watched Maryland public and private schools in action, and it is pretty apparent that its private schools dominate girls basketball in the state in both the Metro DC and Baltimore areas.  The public schools point to recruiting of its players to the point where having one division one player can make a Maryland public school a power. Meanwhile having three or more D1's on its roster may not ensure victory for a private school as several of its private school opponents are similarly endowed.  Public schools often refuse to play the privates hoping the this may somehow weaken them competitively, or, at least, they see it serving as some kind of protest.

The Maryland public schools have more restrictive rules regarding out of state travel and number of games allowed.  If you were a parent of a player seeking to become a scholarship college athlete would you not want your daughter to have the best chance high school-wise to develop?

The top private school programs in Maryland face better opposition locally and play in major national or regional events almost every year.  Yes, there is probably some active recruiting going on as the public school supporters charge but also many of these private school programs have reached the point where their prior success makes players and their parents seek them out on their own.

The "re-classing school" - rank them or not?

National high school rankings have now started.  Every year the question comes up why some schools don't get ranked.  Boarding schools and some non-boarding schools allow (from time to time, not always every year) themselves to use fifth-year seniors or re-classify players after entering the ninth grade giving that person the opportunity to play in high school beyond the eight-semester rule.

(This is a separate issue from seventh or eighth graders playing on a high school team which some states allow.)  The "re-classers" argue about injury such as the dreaded ACL.  In college one can red-shirt (do the year over) but generally not in high school (which "re-classers" allow).

Several of these schools in various years are of top 25 national caliber.  However, from this perspective, such institutions should not be ranked alongside high schools (public or private) which strictly abide by what is often called the eight-semester eligibility rule (once starting ninth grade).  Perhaps somebody needs to do a separate national ranking for these often loaded programs which operate with built-in advantages.

Looking at some of the individual talents in alphabetical order with listed height, position and school within graduation year.  Location of school is in parenthesis.

From Nigeria, Aiyeotan, one of the tallest players in the game, transferred for this season to Blair from Philadelphia-based Neumann-Goretti.  Unsigned but down to a handful of Power Five offers, her game appears to be coming along.  She is improving her catch and finish close to the rim.

Her arms combined with extreme height alter shots and control the paint.  Referees (at least at this event) seemed unwilling to protect her from being beat up while calling fouls against her more closely.  For her size, her rebounding could be better as she does not instinctively know to where the ball is coming off the rim. 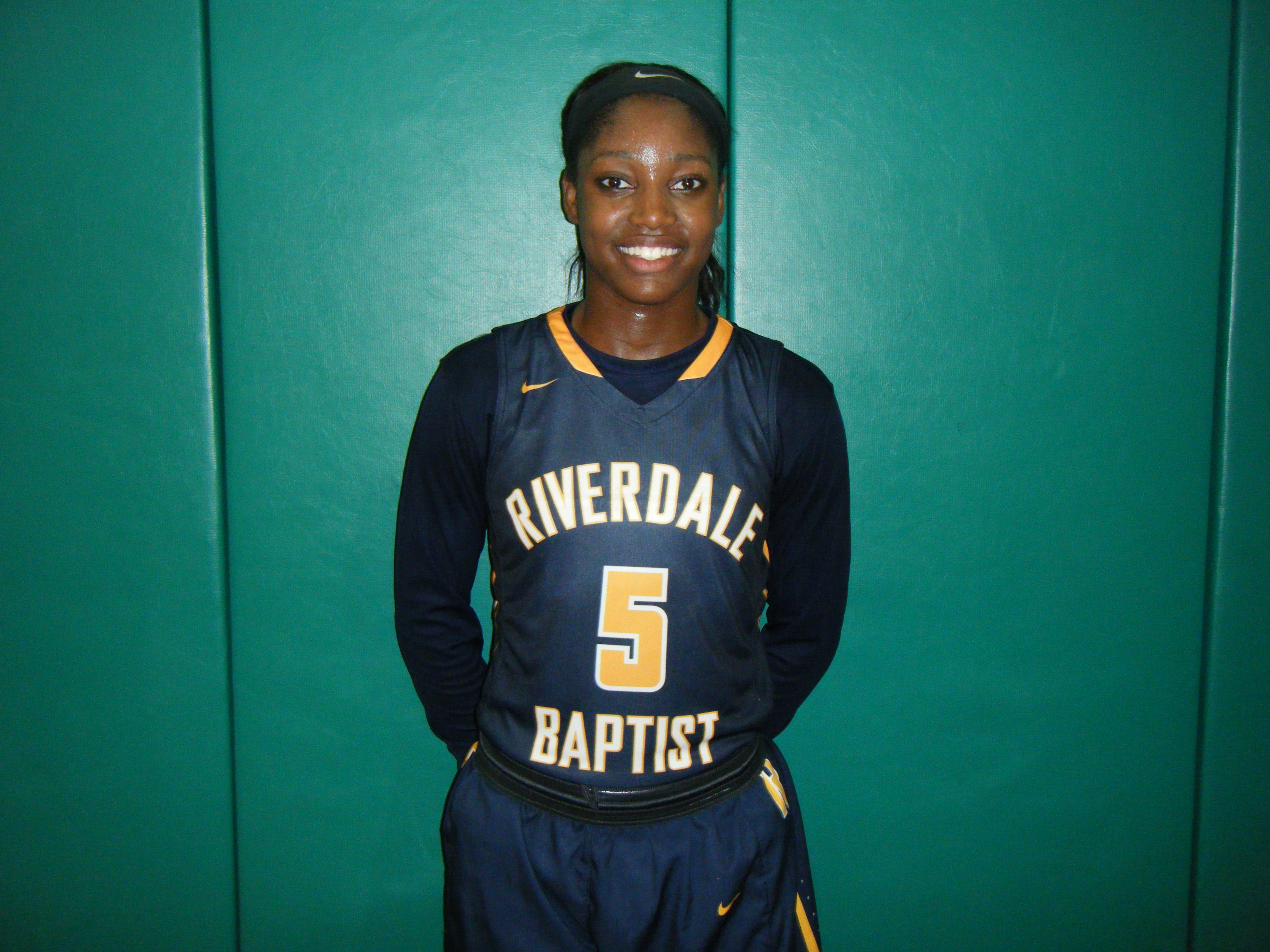 Charles, a Maryland signee, posted two double-digit (24 and 13) scoring performances at the event.  She is an explosive jumper who looks to drive or take mid-range jumpers.

Ideally, she would be a small forward at the next level, but she needs to improve her shooting range to ensure success there.  When asked why she transferred to Riverdale Baptist from nearby Eleanor Roosevelt High School, she felt that she needed the greater level of competition to prepare her for high-level college ball.

Williamson had 19 points in each game as her team split its two marquee contests (beat Blair; lost to IMG) at the event.  She has good quickness, motor and can attack the basket going right (mostly) or left.  Shooting range appeared to be the biggest question in her game.  Regardless, division one schools of a non-Power Five nature still looking for lead guard help in the 2016 class should consider this prospect. 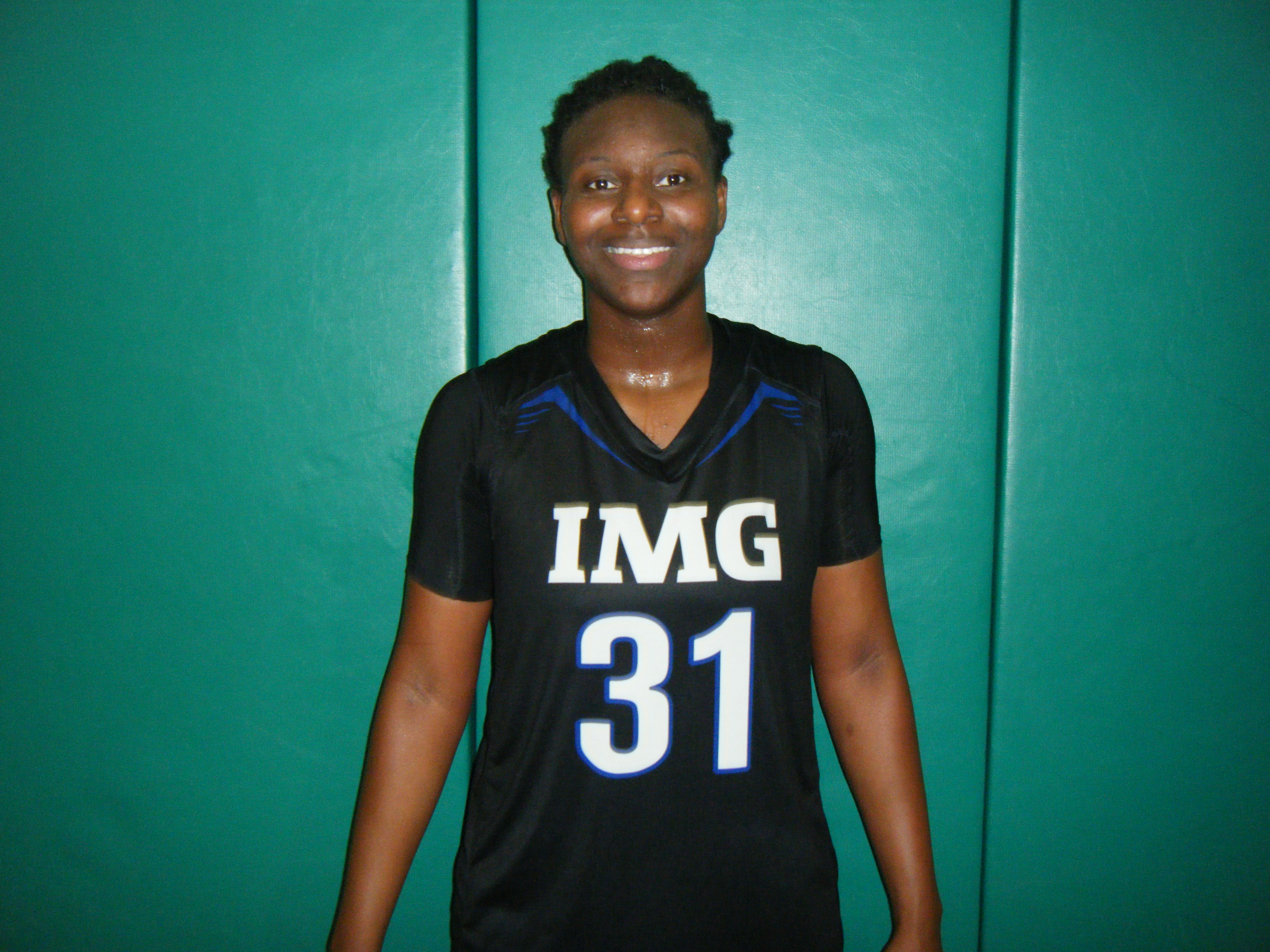 Boothe transferred this year to IMG from Jacksonville-based Potter's House Christian Academy.  Her game appears to be moving more to the perimeter where she is becoming a serious three-point threat (nine total in two viewing).  When she so desires, she has a powerful drive move to the rim.

A lefty, she is now going right on occasion but still needs to work on finishing with her right hand on the right side of the rim.  As talented as any member of the 2017 class (likely top-five recruit nationally), she needs to play harder at times moving more without the ball. In D.C., she posted 24 and 33 points in the two contests versus National Christian (a loss) and Forest Trail (a win).

Espinoza-Hunter showed observers in DC why she is worthy of being a Connecticut recruit (having made an oral commitment). In two viewing (her team split), she posted 25 and 30 points showing a strong drive, mid-range stroke, and three-point range.  The knock on her game from the club ball season has been inconsistency in posting strong game to game results.  This was not seen here! 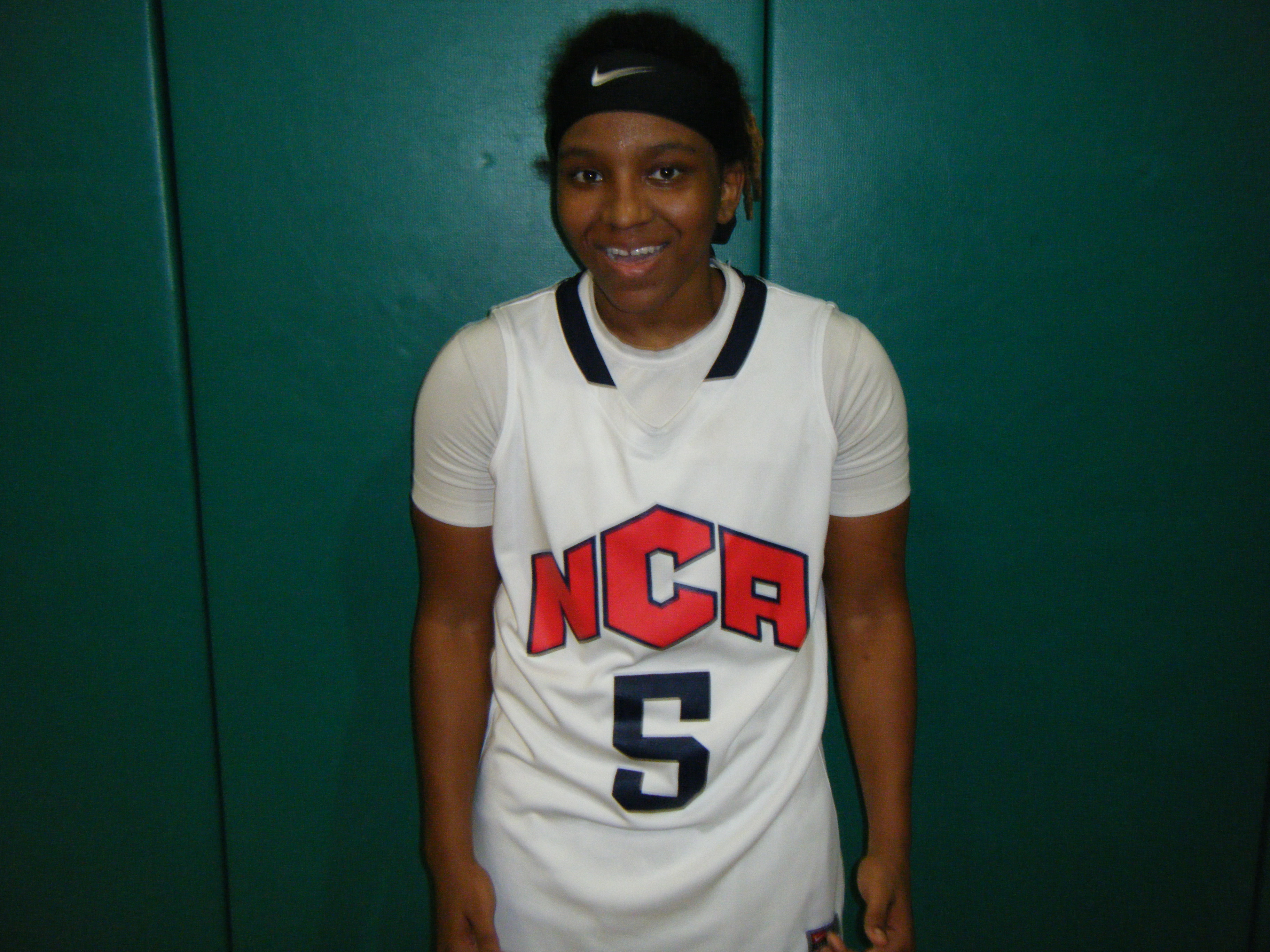 Gray is a terrific high school player who Power Five programs are looking at but most seem unwilling to pull the trigger due to a lack of size and perceived inconsistent perimeter shooting.

Whether in summer club ball or now in the high school season, she seems to show up in every game viewed.  Her handles looked good, and her motor runs at an above average but steady pace.  Here she posted 33 and 14 in victories versus IMG and St. Anthony's of New York. She scored via the three-ball but mostly via attacking the basket.

Marshall showed well in DC posting double figures in all three games.  She can get to the rim but is also an adept three-point shooter.  When the point guard was injured in the 54-41 loss versus Riverdale Baptist, Marshall took over the point guard duties handling the ball adequately.  She has Power Five offers in hand.

Patterson showed a high level of athleticism and an above average motor in a 16-point outing as her team lost (58-53) to Colonial High School of Orlando, Florida. Her scoring was done primarily in the paint with range to the foul line.  Power Five offers are likely already in hand.

In Bishop McNamara's 65-46 win over Incarnate Word Academy, Apesemaka-Vita showed off good versatility in scoring 19 points.  She hit the three, the mid-range shot and scored working her way into the paint.  Above average athletically, she should be getting Power Five looks.

Collins recently profiled in our Art Turner Memorial report (link: What everybody ought to know about Paul VI -- they're legit - Swish Appeal ) was again a star performer here with 23 and 13 points in her team's two victories; also being active on the boards.

Having spent last year at Riverdale Baptist (MD) and the prior year Life Center Academy (NJ), hopefully, honesty can put down roots at this school.  Her game is certainly "the truth" with handles capable of playing point and scoring ability via drives and mid-range shots of playing the shooting guard position at a high Power Five college level.

Wilson's game is coming along has she is becoming more confident running her team.  She showed variety in scoring with drives, threes, and mid-range shots.  She just needs to become more consistent.  Her progress should be monitored from the Power Five conferences down.

Woltman has what is in too short supply in college ranks namely size, mobility and stroke.  Currently more of a center, her body type may push her more to a forward over the next few years.  Already a name on the younger club ball circuit, her progress is already being monitored by Power Five programs.

When an eighth grader can impact a big-time high school game as she did with eight points in her team's 71-64 win over IMG, scouts and college recruiters should be taking note. She understands the game and has a nice perimeter stroke.  Her game and body still need to fill out.