What everybody ought to know about Paul VI -- they're legit

The Art Turner Memorial Tip Off Showcase featured enough talent to draw college recruiters from both the east and west coasts. Two teams that stood out to plenty of the scouts, Paul VI Catholic High School and Neumann-Goretti Catholic High School--both nationally ranked.

Share All sharing options for: What everybody ought to know about Paul VI -- they're legit

Fairfax, VA -- Paul VI High School hosted its annual Art Turner Memorial Tip Off Showcase during the December 4-6 weekend.  While doing so, the Panthers easily won its three contests showing all present why it deserves national attention as an elite high school team this year.

With quite a few major division one prospects on display, it was not surprising the event was well attended. Sixty-eight colleges (all but a few division one) mostly from the East Coast and Midwest but a few from the West Coast as well, attended one or more of the three play dates.  Twenty-five high school teams participated, playing one or two pre-set games except Paul VI which played all three days.

Top two teams of the event (both in the national rankings)

The host school mauled three opponents making each look bad in winning by 32, 35 and 27 points.  The team is loaded with future power five-level players.  What sets them apart from all but a few high school programs is great size in conjunction with solid guard play. All primary (not always starting) players at each position are of mid-division one talent level or better.

The team plays in your face defense but still executes as a unit on offense.   To take a step back, given the blowout nature of these three contests, one can't say how the Panthers will respond when fully challenged which should happen soon enough either in the DC Catholic League or one of the upcoming December non-league scheduled events.  Also, it was unfortunate the hosts were not willing to take on the team mentioned just below.

Watching the Saints was one of the true joys of the weekend.  Unlike the hosts, the visitors from Philadelphia were given two Maryland teams (Walt Whitman and St. Francis of Baltimore)  with some reputation as opposition.

Neither finished particularly close (38 and 18).  This is a small (no listed heights over 5-10) but physical team which hits the boards hard.  On offense, the movement without the ball makes them a really fun team to watch.   On top of all this is an up tempo style which more than not showed good discipline and purpose of action.

James, signed with Villanova, is the little engine of the big Panther machine.  She likes to push tempo. If left open, this lefty can hit the mid-range shot.

Smalls, a James Madison signee, is an all-purpose player.  She can play on the perimeter but is just as happy driving into the paint and crashing the boards for an offensive rebound.  Her high energy play helps set the tone for her team.  For the next level, she should try to build more consistent shooting range.

Toussaint, a Virginia signee, appears to be versatile in her attack.  A good athlete she will drive to the rim or spot out to beyond the arc.  She even showed a nice pull-up jumper.  She just needs to develop more consistency to continue her success in the ACC.

Whitney, a Pitt signee,  is solid both in game and body.  Although more of a shooting guard, she can fill in at the point as she is more than willing to share the ball.

Zambrotta, a Louisville signee, is one of the most skilled guards in the 2016 class.  A lefty, she can drive and finish with either hand.  She can shoot the deep three and is a willing passer.  All of the above should help compensate for being just modestly athletic.

Callahan's team struggled in losing (68-51) to St. Francis of Maryland.  Her 21-point performance was her team's lone bright spot.  With a sturdy build, she ran the offense, protect the ball well and showed an ability to drive going right (still needs to use the left more).  As to shooting, she showed range to beyond the arc.  Currently, she is getting non-Power Five division one looks.

Kapp had a big weekend in Fairfax scoring 18 of her team's 22 points in her team's 54-22 loss to Paul VI.  In the 59-50 upset victory over St. John's, she posted 22 points hitting mid-range shots and getting to the rim.  Currently, she has offers from Hofstra, LaSalle, Lehigh and UMBC in Maryland,

Myers did what she could (scored 16) in her team's 75-37 mauling at the hands of Neumann-Goretti.  She moves well and has three-point range and takes what the offense gives.  The Goretti players were able to focus on her as she appeared to be the only division one prospect on her team (typical situation for Maryland public schools that lose most of their talent to the various private schools around Baltimore and Washington, DC).

Nixon recently moved to Philadelphia from the Virginia Tidewater area and has given the Saints a quality Power Five division one recruit in the process.  A good athlete, she can create her own shot.  At the event, Nixon showed versatility in hitting the three, pull-ups and going to the rim.  She plays hard but showed a tendency to force her shot at times rather than letting the game come to her. 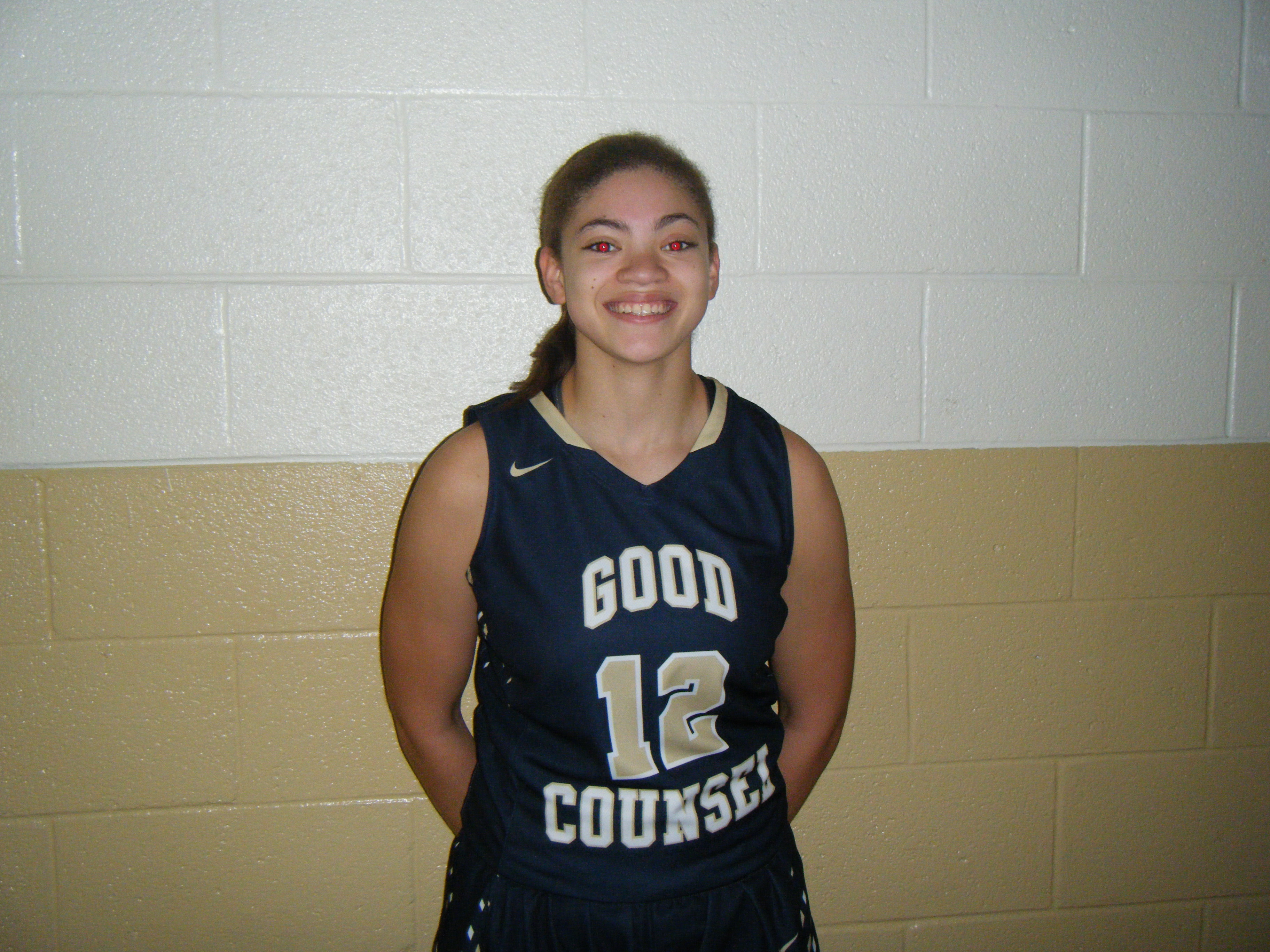 Pulliam is a jump shooter first and driver second.  Generally, she plays within the offense moving without the ball.  She has numerous  division one offers including Georgetown, Penn State, Virginia, Virginia Tech and Wake Forest (plus others not mentioned). 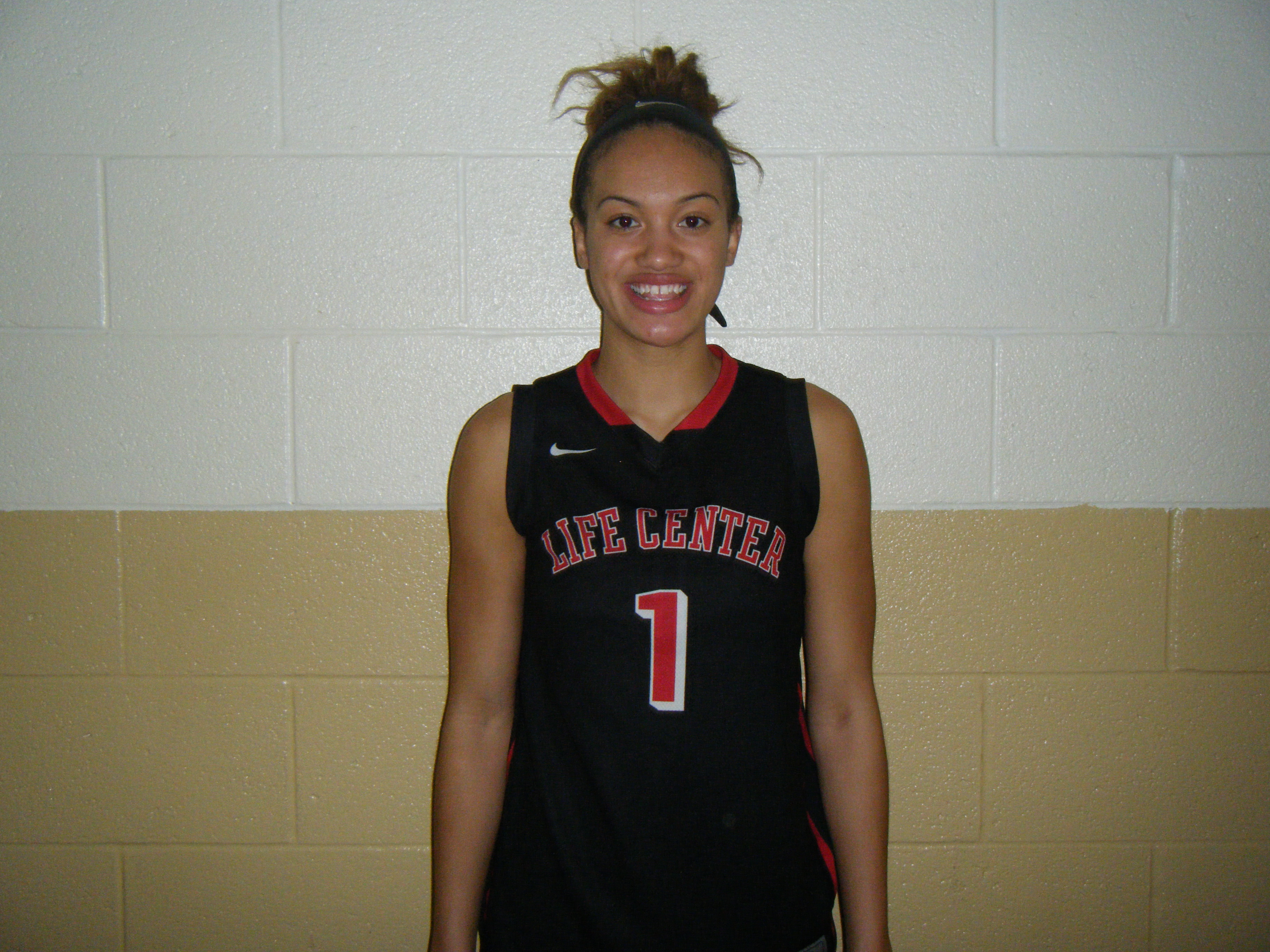 Reed is a New Zealander hoping to play US college ball. Given her size, ability to go inside and out, pass and hit the three,. that should be possible at the Power Five level assuming she so desires.  She does need to improve use of her left hand so as not be so predictable on the drive usually going right.

Sheppard showed consistency in Fairfax scoring 17 in the upset win versus Christ the King and in the upset loss to Boyertown.   Her specialty appears to be the baseline three-ball.  She did show a drive (handles could use strengthening) but coming over the top seems preferred.  A good athlete, she is getting Power Five looks.

Although none of her team's games were close, Collins got our nod for most consistent player for the host school at the event. She scored primarily in the paint, rebounded, defended and blocked shots all with good mobility.  Power Five offers are already heading in her direction.

Chapman's open court vision is impressive.  A good soccer player as well, she is light on her feet.  Her outside shooting is the area which needs the most attention for the long haul.  Already highly regarded as a Power Five prospect, everyone needs to take a step back and not expect her to dominate games as a freshman!

Owusu appears to have her conditioning improved compared to when last seen this summer.  Strongly built, this will probably always be a concern regarding her on court play.  Her abilities to shoot the three big-time as well as take the ball to the basket already has Power Five programs cuing up.

Sometimes you never know where big-time genes will surface,  Currently a post player with more of a power forward rather than center's build, Tshitenge is starting to show a face-up shot.  However, her scoring ability is still primarily around the basket.  Already receiving Power Five offers, she is former NBA player Dikembe Mutombo's niece.