Herein changes to the NCAA evaluation periods and talent at a couple of late September Atlanta prep club events is discussed.

Powder Springs, GA -- Late September marks the end of the club basketball season which started in March.  For college coaches, this was a last look at prospects before the high school season begins in November or December (depending on state).   Also in the air was talk about changes in the NCAA calendar going forward.

Below Swish Appeal takes a look at the rule changes (official and proposed) as well as some of the talent present at two events attended from the recent late September college evaluation period (September 25-27).

The Fall Finale, organized with a pre-set schedule of games, had 32 teams primarily from the South with 56 colleges (mostly from the South) present at its event.  The Marietta event, set in grade/age-related brackets, had 53 teams and about 75 colleges in attendance (more coaches from outside the Southeast as the field had a bit more geographic distribution).

Unless you are a college coach or club basketball event organizer, you probably were not aware of a significant change in the evaluation period for next spring.  There will be two (rather than one) evaluation weekends in April (15-17 and 22-24). This will give college coaches more time to see prospects in the club basketball season when players have had the opportunity to practice for several weeks before being viewed.

Probable but not yet enacted change in the NCAA viewing calendar

From talking with several coaches of different levels of division one ball, the September evaluation weekend, which has been in existence for years, will likely be terminated.

The thinking is that September has become over-burdened with home visits for the junior class (in its second year), official on campus and home visits for seniors and individual workouts for current team members.  Evaluation play in September does not give them the best reading on players' abilities as so many have been away from the game (resting or in other sports) for over a month).

One reason that September viewing has escaped the ax to now is the idea that seniors needed one more chance to be seen before the curtains come down on non-high school evaluation.  This once prevailing view may now have slipped into the minority.  We will not know if this change is enacted until the next calendar (August 2016 - July 2017) is released.

Recently, I had a chance to chat briefly with Maya Moore before the Lynx's game in Atlanta.  Moore, who normally appears to be a very even-keeled person, got very excited by the thought that her old high school (Collins Hill in nearby Gwinnett County) may soon be returning to prominence among Georgia high schools, after many years of non-competitiveness at the highest level of Georgia prep ball, where Maya and her teammates had the program during her tenure at the school.

(See photo of Bria Harmon, Javyn Nicholson and Jada Rice of Collins Hill High School and club FBC Black above, and narrative on each below.)

Players below are listed alphabetically within graduation class giving height, position and club team with hometown in parenthesis.

Alexander's name was not correctly listed in the college coaches' packet, and evaluators were anxious to find out who #14 (Alexander) was.  She was showing above average athleticism and an ability to create the mid-range shot or go to the basket generally going to her right.  It was evident this prospect has a division one upside although she could strengthen her ability to go left.

What was so funny was the reaction these same coaches gave once it was discovered she was a senior (2016 class).

"I like this player, but she's a senior, and we are done in that class."  Another was more like "she needs to be better at this point in time (start of senior year)."

Do players stop improving in the senior year?  Some do, but others get much better.   Some of the comments could make one wonder if these evaluators viewed these prospects as sort of stuck in place as to their game.   Are all their incoming players ready to contribute as freshmen?   In reality, many need at least another year to play at their university's level.

Daisa Alexander appears to be one who is caught in this "senior void."  Word in the gym is that she has a couple of modest division one offers but would like more options.  Assuming she does not commit in November, she deserves additional evaluation during the upcoming high school season.

Davidson represents one of those players who could be undervalued by many division one programs during club basketball.  She is more shooting guard than point and being a bit small and on the thin side got passed over by Power Five schools.

However, she is a capable spot-up shooter as evidenced by hitting eight threes in one contest during the weekend.  She also appears to be working on her penetrations to the basket.  The prevailing opinion on coaches' row was that Furman (to whom she is orally committed) got a good player for its program.

Henderson is a versatile athlete with length and one who plays both ends of the court.   A solid defender, on offense she can score behind the arc or inside at mid-range or going to the basket.  As yet, she does not dominate games.  Her best days probably lay ahead of her.  Not surprisingly, she is getting Power Five looks.

Camp can be a major presence at the low post having developed moves around the basket.  With her very strong build, she sets picks that could send an opponent to the hospital if running into her without warning.  Camp should be getting BCS looks but must watch her conditioning as she runs the court just adequately as is.

Mason, being recruited at the Power Five level, would just assume go through you as around you on her way to the basket.  One key to her finding driving lanes is her movement without the ball.   Mason also works hard at the defensive end.  Building consistent perimeter range is the area she needs to develop most.

Morrison got strong marks on coaches' row, already having Power Five offers in hand.  She is a solid defender.  Offensively, she can shoot the three and go to the basket.  Perhaps her mid-range shot could still become more dependable.  Recently "Q" transferred to reigning Georgia state 6A (large school) champion McEachern from much smaller Mount Paran Christian.

Zippy (listed as such) has a most appropriate nickname.  She shows good energy on the court while being light on her feet.  She has decent handles and primarily looks to penetrate to score.   She probably needs to develop more confidence in her perimeter stroke as she was reluctant to put up outside shots.  Thanks to her energetic play and athleticism, she is getting Power Five looks.

Crawford's build (fairly solid, muscular but not bulky) tells a lot about her game.  She likes to get into the lower key and score fairly close to the basket.  The "and ones" thanks to successful finish with contact are nice bonuses.  Although she can hit from the wing, building consistent range might be something she should work on but what she already brings to the table has Power Five recruiters already tracking her.

Edgecomb likes to attack the basket whether it be from the high post or wing.  She can hit the mid-range shot, but driving is scoring option number one.  She plays hard and is a good rebounder thanks to being quick off her feet.

For a young player, she understands what a good shot is and showed consistent production game to game during the weekend.  Edgecomb needs to get stronger and work on her perimeter shot with Power Five schools now monitoring her progress.

Rice, along with Bria Harmon and Javyn Nicholson discussed below (all Power Five prospects), is a player who should help Collins Hill High School return to prominence in Georgia high school ball over the next few years, having last been dominant in the time of Maya Moore.

Rice is powerfully built yet runs well.  She can finish with contact at one end and block shots at the other.  She appears to want to post up more than face-up although capable of either.

Boyd is one of those long-armed, lean, quick off their feet players.  Put that together with a good motor and nose for the rim and you have a likely Power Five prospect.  Adding greater range to an otherwise solid game would complete the package of skills. 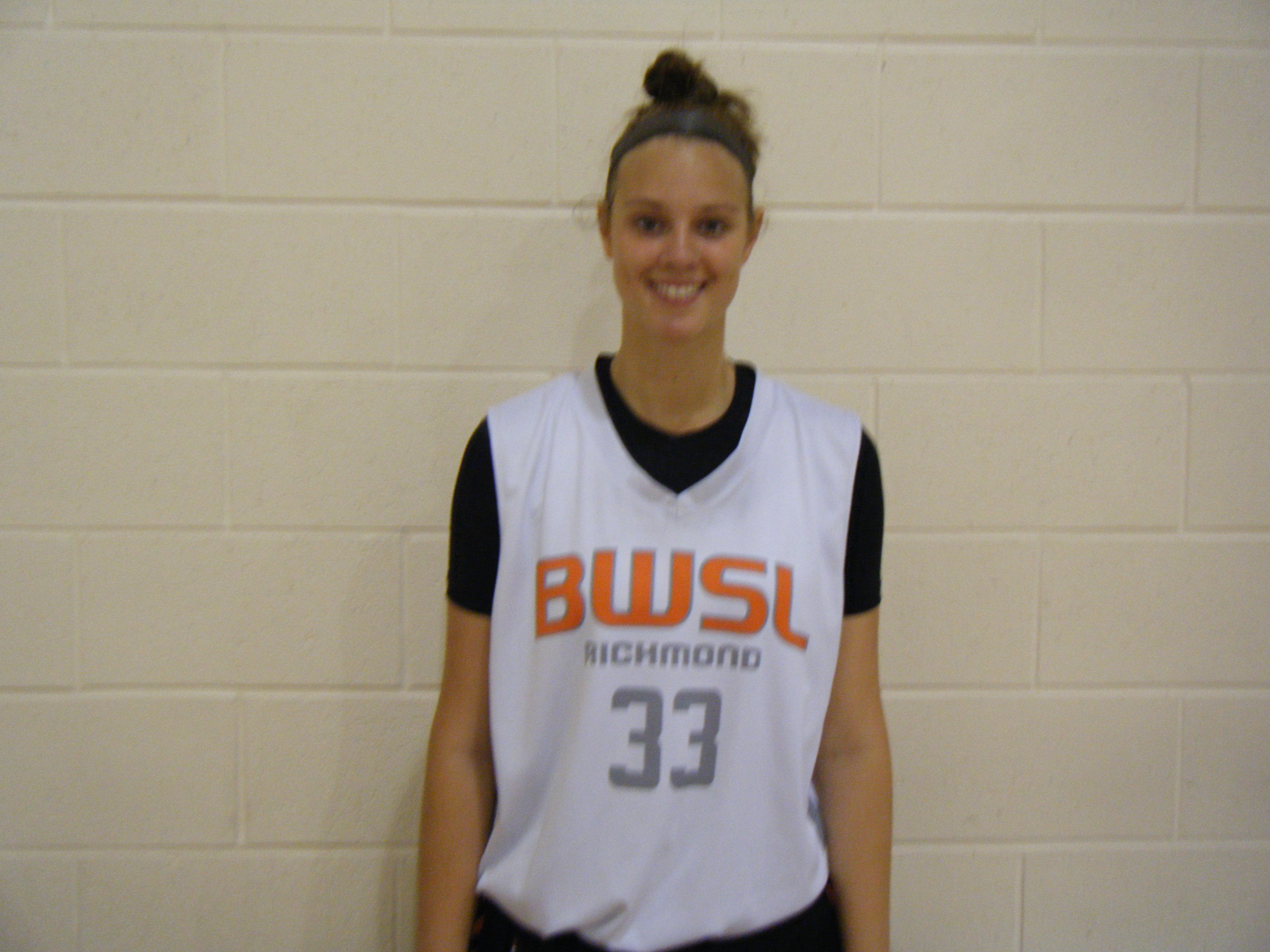 Brunelle, likely one of the top prospects in the 2019 class, was a "must see" while in Atlanta.  She can score in the lane, at mid-distance (via the catch and off the dribble) and behind the arc.  For her size, she has decent handles but given her interest to spend time on the perimeter, she still need to get better in this area.

Harmon, a coach's daughter, is a floor general with quickness.  She has a nice ability to change speed with the ball to aid in penetration.  A good on ball defender, she still needs to learn when and when not to help.

Nicholson is your classic low-post player with good hands able to finish with contact around the basket.  She has some face-up ability but could add to this and must watch her conditioning as her build is already thick enough.

Rivera is another of those young players whose game has not yet caught up to her athletic potential.  She is long and lean with good "ups."  She showed an excellent face-up stroke in the key but needs to build more range and improve her handles to fulfill her major division one potential as a small forward which would best fit her body type long term.

Jones, who plays for her mother in high school, combines above average basketball IQ with above average athleticism.  Playing on a team with players mostly a class older, she appears to have her teammates respect as she decides when to attempt to score (primarily via drive) or just pass to involve others.

Building shooting range is probably an area that needs work as she didn't look much to shoot outside.   She should not want for college interest during the high school season as her team (Charles Henderson High School), with more than just Jones, should be one of the best in the state in the years ahead.

One may ask how one discovers a future major division one player so young?  In this case, it was strictly an accident of marking time watching some middle school teams play.  You look out onto the court and see a relatively thin, tall player scoring around the basket, rebounding and running the court.  In checking, it turned out Watkins is just in the sixth grade and 11 years old.  Look at her hometown (listed above) and you can guess one college of note already monitoring her progress.