The event was held Dec 29-31,2014 at St. John Neumann High School in Naples, Florida.  Teams were seeded into two brackets of eight.  The American Division was considered the stronger of the two divisions but winning the National was a fine accomplishment as well.

The invited field consisted of five Florida-based teams with the other 11 coming from 10 different states as far away as California, Illinois and New York.  College coaches in attendance ranged from high major division one schools to division two's mostly from the South, Northeast and Midwest.

One may wonder how Naples has managed to attract high quality fields year after year.  Many tournaments invite teams coming off successful seasons or just go with "brand names" assuming the team will be good as usual.  Naples goes several steps further looking for teams that will be good in the next season the prior winter and spring, monitoring upcoming graduations and team composition.  The architect of this formula is Kelvin Powell (seen in photo with winning teams [Kelvin is wearing a white sweater]).  The man is a bloodhound when it comes to sniffing out young, talented teams.

Picking up the action in the Finals of the event...

Both divisions showed why having a quality senior point guard is one of the best ways to insure victory in a difficult event like Naples where you may play a future state championship team on three successive days.  Each of these leaders (Boogie Brozoski and Malica Monk) of the victorious sides is a BCS signee who played with poise whether ahead or behind.

Going into this game it appeared the Long Islanders (LIL, coming in with two losses on the year) were a very slight favorite on the basis of their senior-laden starting line-up led by Michigan signee Boogie Brozoski, who dazzled throughout the tournament with dribbling, passing and outside shooting.  Facing them was undefeated Miami Country Day (MCD), who had dodged defeat with late three balls on a couple of occasions (only to lose to one here).  MCD's ace in the hole was greater quickness and a pair 5-8 sophomore BCS-level guards in Channise Lewis at point and Kelsey Marshall at shooting guard.

The first quarter was indicative of the game in that LIL was the better executing team going out 11-4 to start the game only to see individual heroics (five points by Marshall) bring the score close to level at 15-14 after one quarter.

The second stanza saw Lutheran as the smoother club having to offset losing the turnover battle (5-3) to lead 28-25 at half.  Brozoski led her team with nine while MCC's sophomore guards had seven each.

The third quarter saw LIL continuing to out-execute MCD which stayed in the game thanks to a number of run-outs for baskets.  For several possessions MCD went box-and-one versus Brozoski but LIL's offense barely skipped a beat with Lutheran's lead extended to six (45-39) by quarter's end.

The fourth quarter saw MCD's quickness advantage come to the fore as Marshall made four steals in a row turning the game around. The Miami-based squad led 49-45 with just under five minutes left   Having a chance to get a grip on the game, a couple of poor shot selections down the stretch was an Achilles' heel.  Still, MCD's defense kept them in the game only trailing by one or two points in the last ninety seconds.

With the Long Islanders unable to close out the game at the foul line in the last minute, MCD's Lewis was able to convert two foul shots to level the score at 53 with 29 seconds left.  Ironically, the winning three-ball coming with about three seconds left was off a sort of out-of-sequence heave by Lutheran's Taylor Byrne, who had scored her first 11 points near the basket or at the foul line.  Country Day was unable to get off a decent shot in the 1.5 seconds placed on the clock after they had called timeout.

Lutheran had better scoring balance with four players in double figures led by Byrne and fellow senior Erin Storck with 14.  Channise Lewis led Miami Country Day with 17 points.  Long Island Lutheran won the assist battle 13 to 8 thanks to its game-long superior execution while Country Day hung in the game winning the turnover battle 20 to 5. 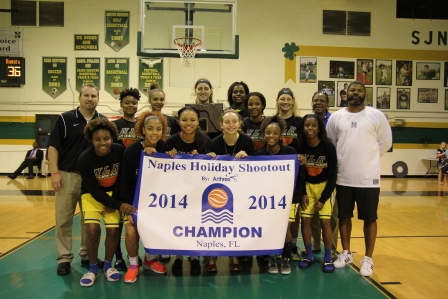 On paper, the Georgians had slightly more future Division I talent but was a younger club based on a sophomore core.  North Little Rock's ace in the hole was a bigger, more experienced lead guard in the form of Arkansas-bound Malica Monk.

Undefeated St. Francis would look to go inside to its 6-3 sophomore center Kasi Kushkituah who struggled all night going 3-for-9 from the field and 0-for-8 from the foul line.  However defensively Kasi was a monster with three blocks and numerous more alterations of shots to go with 13 rebounds (seven offensive).  Once-beaten North Little Rock used balanced scoring to go up 12-7 after a quarter as the Georgians got to the rim numerous times only to miss.

The second quarter saw St. Francis finally making a few shots with four different players scoring while Malica Monk totaled all seven North Little Rock points (game-leading 11 for the half as her team led 19-17 at the break).

The third quarter saw Monk continue her heroics as she scored all 10 of her team's points. St. Francis continued to struggle to score as the North Little Rock defense remained stout throughout the quarter with North Little Rock nursing a 29-26 lead into quarter four.

With 5:55 left in the game, North's 5-9 senior guard Camdyn McDaniel scored her team's first "non-Monk" points since quarter one to put her team up five.  They never looked back again stretching out the margin.  McDaniel went on to add eight more in the quarter. Meanwhile, the Georgians continued to struggled to score never challenging the lead in the last few minutes.  Sophomore guard Nichel Tampa (5-4) led St. Francis with 10 points.  Monk, star of the game, led all scorers with 23 points and five assists.

Boley, orally committed to Notre Dame, is considered one of the best high school players at her position in the USA.  She can post up, face-up at mid-range, drive from the high post as well as shoot the three on occasion.  You can add to that good passer and above average basketball IQ. In her team's 71-69 win over Homewood-Flossmoor, she tallied 13 points and 12 rebounds.

Boogie, committed to Michigan, was a crowd favorite in Naples.  Through good and bad, she didn't lose her cool, ran her team's offense and scored the ball.  In the semi-final 52-44 win over Rock Bridge, she scored 28 points. For her efforts, she was named event MVP.

Byrne, committed to Seton Hall, was a consistent blue collar worker in the paint.  Besides scoring the winning basket in the championship, she regularly did the little things like box out and pinning opponents in the paint.

Cunningham, committed to Missouri, is one of the more physical small forwards in high school basketball. She embraces contact on the drive.  In her last two games in Naples, she posted 34 points.

Grant, committed to Syracuse, is a basketball specialist.  She established a new Naples Holiday Shootout record with 16 3's for the three game event.  Her single game record during her high school career is 10.

Gray is a name you may be hearing about in the years ahead.  She has a good understanding of the game for a young player.  She drives to the rim equally well going right or left.  On top of this, she has a nice mid-range stroke.  In game three of the event, she scored 29 points although her team lost 52-51 to Archer High School of Lawrenceville, Georgia.

Jernigan, an uncommitted senior, is a good athlete, who runs her team's offense.  On day three, she tallied 22 points showing versatility in scoring via drives, mid-range shots and even hit a three.

Lewis is one of the best point guards nationally in the 2017 class.  She handles the ball well, has good passing vision and can attack the basket forcefully.  She also has a nice mid-range stroke and defends well.

Matthews was Poly's workhorse in the paint as the team finished third in the American Division in defeating Rock Bridge 55-43.  Working in the paint, she posted a double double with 16 points and 10 boards.

Monk, committed to Arkansas, could easily have been the event MVP as she led her team to the National Division title, largely on her own efforts (some of which is outlined above).  In the final she had 23 points and five assists with only one turnover.

Overcash is one blue collar post player doing nothing fancy - just her job.  In her last two games at Naples, she tallied 27 points and 25 rebounds.

Suggs, committed to Duke, turned in a sparkling 27-point performance on day three. She was strong on defense, showed her mid-range and three-point strokes, and chipped in four assists.

Walker, committed to North Carolina, is considered to be one of the best shooting guards nationally in the 2015 class.  On day three, she posted a 26-point (five threes), four assist, five rebound performance.