The 2014-2015 Florida Gators are put under the microscope to examine strengths and weaknesses.

At a recent press conference, Gator Coach Amanda Butler extolled her troops with "I'm proud of our fight."

In this case she was referring to cutting a 22-point Ole Miss lead to just three before losing 64-57. Herein, we will put Florida's women's basketball team under the microscope not so much to look at one game as to see the team's strengths and weaknesses.

When their backs are to the wall, the Gators seem to play at their best. The team's intensity and focus seem to rises one or more notches and they can make double digit leads disappear against many teams.

"We have to take advantage of our opportunities better. We need to understand what's working. We have to have more discipline." -Florida Gators coach Amanda Butler.

All too often this season, Florida has let a lead disappear.  It is fair to say the team has not yet replaced last year's senior leader Jaterra Bonds, who led the team in assists and scoring.

Butler's thoughts on this subject: "Having the critical breakdowns that we did. Just not defending the three-point line very well."

"We have to take advantage of our opportunities better. We need to understand what's working. We have to have more discipline [referring to taking too many three-point shots and not looking to the post enough on some occasions]."

Hold on to the ball

Including its non-conference schedule where it took loses to non-BCS schools Eastern Washington (having a good year) and struggling Savannah State, the Gators ranked 11th in turnover margin (+0.6) through games of January 5th and 12th in assist/turnover ratio at 0.7. The Gator guards need to do a better job attacking pressure defense rather than being on their collective heels when facing it.

While Florida has players (January Miller and Carlie Needles are above 33% or better from behind the arc) who can shoot the ball from the perimeter, they struggle to create their own shots and break down the opposition with strong penetration on a regular basis.

Like so many teams, the Gators have no one player who can be given the ball and likely create a quality shot for themselves. The closest thing to fulfilling this description is sophomore forward Ronni Williams, who was a McDonald's All-American in high school and considered a prize recruit.

"Evaluator thinking" was that Williams would transition to the small forward and be a dominant player at that position. Unfortunately, as a freshman Williams was forced to play a lot in the paint as the Gators lacked size - in fact, she fouled out of 16 games last year, an SEC record.

This year she's playing more of a power forward role. She shows flashes of being that special player and is starting to show consistency with six double digit outings but still only averaging 10.1 points per game for the season. A lot of her scoring still comes in the lower paint.  She needs to improve her ball handling (particularly her left hand) and work to make her mid-range shot more consistent. 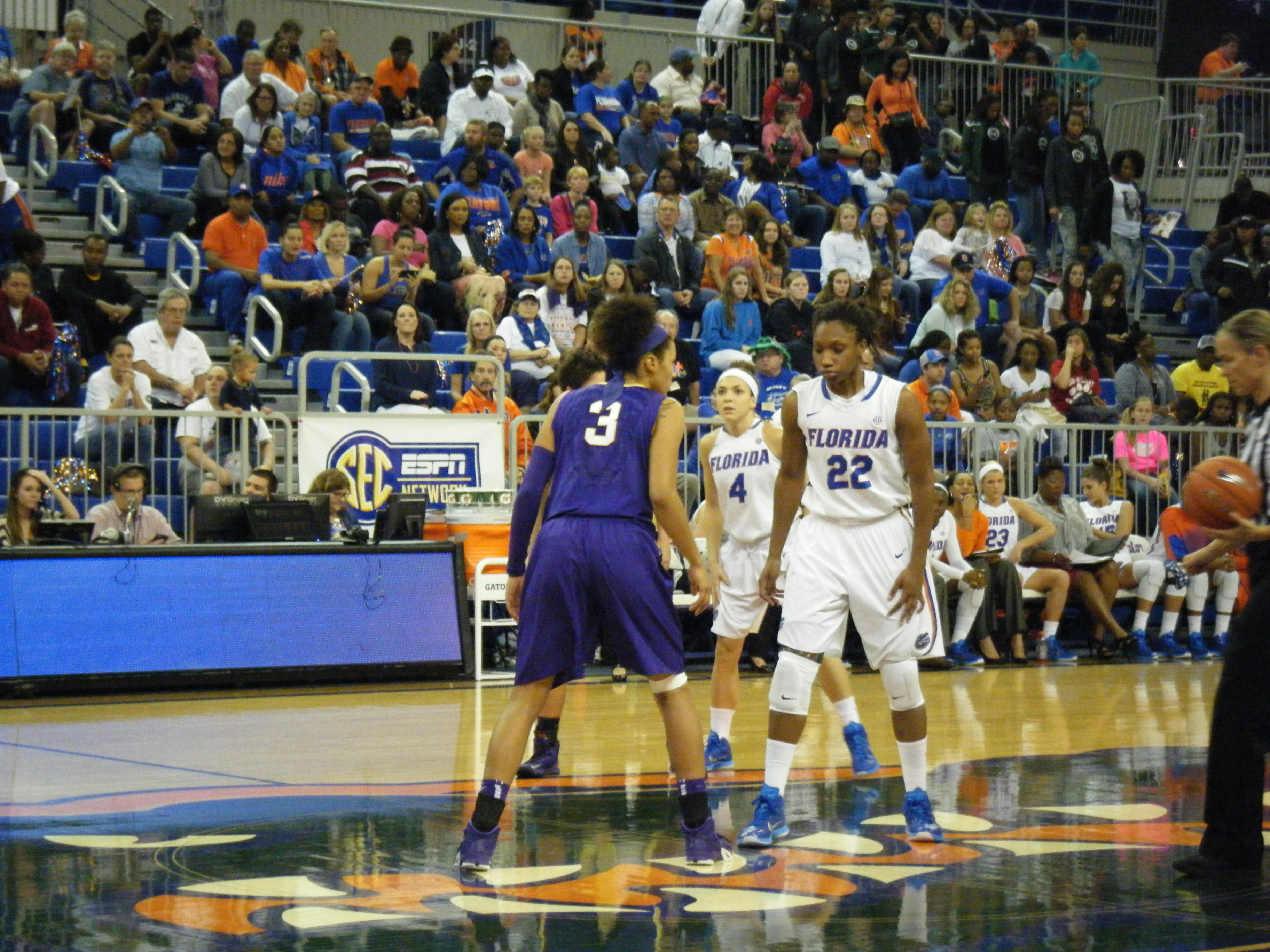 The struggling Florida Gators get into SEC play. (Photo by Bob Corwin)

Right now, the press row talk is that the Gators defend the post better than scoring there. For one thing, the team remains small by BCS standards with prime interior players being Williams (6-0), senior Kayla Lewis (6-0, team's leading rebounder at 6.9 per game) and freshman center Haley Lorenzen (6-3, 7.9 ppg, 4.4 rpg).  Given that two are still young, there is hope here.

Butler points to improving post play and thinks the Gators can "hang their hats" on that down the line.

"I think the problem is understanding when those moments are there (to enter the ball to the post) and realize what's working.  It's a really tough balance. You don't want to take a shooter's confidence away but [at times] we have got to get the ball into the paint."

In watching play from the sidelines, it appears at time the Gator guards have difficulties seeing when a post player is coming open. Particularly versus the zone, the ball can be seen just being passed around the perimeter (no penetration and no meaningful post touches).

Lewis is a player who has battled injuries early in her Gator career having played in only half the games as a freshman and then being redshirted the next year. She seems to play her best in the crisis moments when Florida needs to make a run. Like Ronni Williams, she is not much of a 3-point threat having made only four in the last two years.

Lorenzen is a talented player who was highly coveted by BCS schools in the Midwest as she hails from Iowa.  Her play to date is typical freshman with five double digit games so far this season. She needs to step up her rebounding and become more consistent with her face-up shot.

In an ideal world, the Gators would love to play Lewis, Lorenzen and Williams together as three of their tallest and perhaps best players, but none is really a small forward who can hit the three-ball. This has created an opportunity for double digit minutes (currently about 15 per game) for 6-2 freshman Brooke Copeland, who generally hangs out along the baseline looking for long range shooting opportunities rather than attacking the basket. In practice, the word is she's deadly but so far in games is averaging a modest 31.9% from behind the arc, 5.1 ppg, 2.7 rpg.

The primary ball handling guards are Carlie Needles and Cassie Peoples, both listed as 5-6 juniors. Both can shoot the ball on the perimeter but both also have slightly more turnovers than assists for the season.

The shooting guards are juniors Antoinette Bannister (5-10) and January Miller (5-8). Bannister, who transferred from North Carolina, is primarily a slasher (44.1% from the field but only 25.8% from deep). She has missed a few games this year due to injury. Miller can score via the long ball (36.4%) but overall is only hitting on a down 31.4% from the field from last year (38.5%).

At one point in a press conference Coach Butler stated, "We need to shoot the ball better."

Maybe a good supplemental point to that comment might be each player needs to take what are good shots for them.

To sum up the perimeter woes, the Gator guards need to be more focused more of the time taking advantage of what the opposition is giving. They need to make sure the posts are getting adequate touches and passes are to teammates on the court, not to the stands or the opposition. With a difficulty creating shots individually on the perimeter, ball movement has to have an urgency to it whether 10 up or 10 down.

Other bench and injured players

Junior Carla Batchelor (5-10) is another undersized forward (listed as a guard). She appears to want to hang out at the high post moving on to the perimeter occasionally. Regardless, she has been a limited factor.

Freshman guard Dyandria Anderson (5-10) is an active defensive player but has struggled to shoot the ball (31.8% from the field).

Junior center Viktorija Dimaite (6-4) has spent much of her time at Florida on the injured list with this season being the first year she has played. Whether because of injuries (two ACL's included) or otherwise, she has struggled when on the court and gets little meaningful time.

Freshman guard Isis Young (5-7) was highly regarded coming out of high school but has been out so far this year recovering from an ACL from high school. The plan is for her to be redshirted.

Amanda Butler is a good motivator and prepares her team well. The problem that the program has had trouble landing enough high quality recruits to compete successfully with the top tier SEC teams.

This year's top Florida senior prospects all committed to out of state programs. That has much more than not been the case since the early days of the Gator program with only the tenure of Carol Ross seeing a significant change in that pattern. Florida-based BCS schools have to constantly fight the image that basketball is not important in a state where football is king.

Thus, many quality recruits wind up populating successful out of state programs (Baylor, Duke and North Carolina being big winners for prize Florida prep players this year). For 2015, Florida has only signed another perimeter player in 5-foot-10 Alexis Robinson out Hillsborough (Florida) Community College. You don't need to be a brain surgeon to know more quality "bigs" are needed in Gainesville. With all but one key player (Lewis) back for next year, Coach Butler needs to look for improvement amongst the current squad.

Florida was picked 10th for the current SEC season after finishing 8-8 and making the NCAA second round (a respectable 20-13 record last year). Currently the team appears on course to come close to the negative pre-season forecast (now 9-7 overall, 1-2 SEC) and not make the "Big Dance" in 2015.