The Chicago Sky started out better in Game 2 - it couldn't really have gotten worse - but the Phoenix Mercury are still ahead by double digits.

The Phoenix Mercury finished the half on a 20-5 run to hold a 51-36 lead over the visiting Chicago Sky at halftime.

DeWanna Bonner's 8 points and active defense helped the Mercury withstand early foul trouble for both Brittney Griner and Diana Taurasi to keep the Sky at bay until they were able to find a rhythm with their full unit on the floor. But Diana Taurasi scored 13 of her game-high 16 points in the second quarter to help Phoenix go on the huge run to end the half while Griner's 10 points along with 3 blocks to provide her normal defensive presence.

Whether intentional or not, the Sky got physical with Griner forcing her to the floor twice during the first half, but that alone isn't going to be able to stop the Mercury.

The Sky were able to not only keep things close but also even take a lead with 6:37 left in the first half, but Elena Delle Donne picked up her third foul with 3:37 left and they went on a two minute scoring drought while the Mercury began to heat up.

Delle Donne was a key figure for the Sky, playing more minutes in the first half of Game 2 (15:44) than she did in all of Game 1 (10). Fowles leads the team with 5 rebounds, but went 0-for-5 from the field as she too picked up two early fouls and was rendered ineffective. With the Sky's frontcourt struggling with foul trouble, they drifted out to the perimeter in the second quarter and took just 3 of their 21 shots inside the paint . 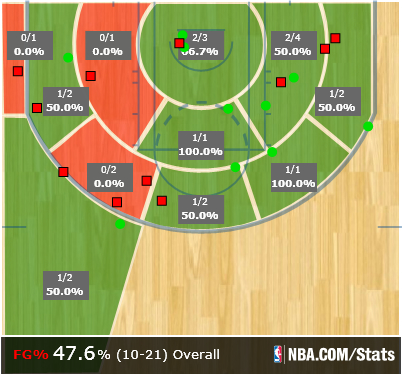 Stay tuned to our storystream for more updates.