What was the best WNBA game you watched in person as a fan?

We asked what your favorite game to watch in person was. Here are just some of your answers.

Share All sharing options for: What was the best WNBA game you watched in person as a fan?

It is one thing to watch a WNBA game on television or some form of online streaming. It's another experience to actually watch the game in person. For many basketball fans, attending a game can create some great memories. Maybe it's a great performance by a favorite player. Maybe you got your favorite player's autograph. Or maybe you met the love of your life.

Since I am writing this post, I'll start out with mine. There are a number for me, but this one sticks out a bit more:

I went to a game at Verizon Center watched a game on July 24, 2007 between the Washington Mystics and the Seattle Storm. In that game, I watched in awe as Storm post Lauren Jackson scored a co-WNBA-record 47 points on 18-28 shooting from the field. She even scored 11 points in the fourth quarter of the game to force overtime. Anyone in the arena that night had to be impressed with her performance, win or lose.

Despite Jackson's amazing scoring performance, no one else on the Storm could really get it going offensively, and the Mystics won that game, 97-96. Alana Beard, DeLisha Milton-Jones, and Monique Currie all had strong scoring nights, as they scored a combined 72 points in the game. Beard in particular had a very strong defensive performance as well, where she had two steals and three blocks that night.

So I left that game feeling that I got my money's worth. I just watched WNBA history as Jackson had the night of her life, even though it was at Washington's expense. Despite that performance, it was not enough for them to defeat the Mystics.

But enough about me. We also asked you on the site and social media what your favorite games to watch in person were. Here are just some of the responses we received.

Our own James Bowman reminisces a Dream game back in 2009 when they blew out the Phoenix Mercury at home, 106-76:

My writeup from a long time ago is here.

The reason this was my favorite game ever is because after a 3-31 season, this was the first time that Atlanta not only defeated a good team but decisively defeated a good team. This game closed the book on the 2008 season, and gave me optimism that the Dream’s basketball fortunes were going to be very good. (The Elmo Bowl and three Finals sweeps were to come later.)

In addition, we have a tweet from another fan who got to take a picture with rookie guard Shoni Schimmel back in July during a game against the Washington Mystics:

@SwishAppeal Monday's Sky game vs Indy is up there. Also vs Minnesota in 2013.

And he even sent me a lengthy email here to detail why. Eric didn't just give me one, but three key games that I think many Sky fans would believe are pivotal moments in the positive direction of their franchise:

There are three (home) games I've been to that I would say are the most memorable to me. The first (chronologically) was versus the Minnesota Lynx in 2013; big 4th-quarter comeback against the best team in the league, capped by a game-tying 3-pointer by rookie phenom Elena Delle Donne (32 points on the night). They went on to dominate OT and take the win. I think this win convinced us as a fanbase that we were finally a good team, we had our franchise player, and after some really tough seasons, that we belonged amongst the best teams in the WNBA.

The second game should be pretty obvious: when the Sky clinched the playoffs for the first time, against New York that same summer. There was an air of certainty in the arena that night, like people knew we were going to win the game and finally clinch a spot in the postseason, but I don't know if anyone actually believed it until the final buzzer sounded.

Finally, last Monday against Indiana was, without a doubt, the best Sky game I've ever been attendance for. Coming in, it was a must-win game; the Sky were coming off yet another disappointment against a team that had straight owned them for years. And for a while, it seemed like this game would be no different; Indy jumped out to an early lead, Elena Delle Donne was clearly hurting, and the Sky didn't seem prepared for the physical defense of the Fever. The "Comeback Kids" didn't give up, though, and backed by the most raucous crowd I've ever been a part of (which cannot be understated; the Sky are usually near the bottom of the league in attendance), they clawed back to force overtime, and then another one, before finally outlasting the Fever in an exhausting but incredibly rewarding victory. Long story short, there was plenty of celebrating on the concourse that evening.

One Fever fan gave a quick response on our Facebook page: 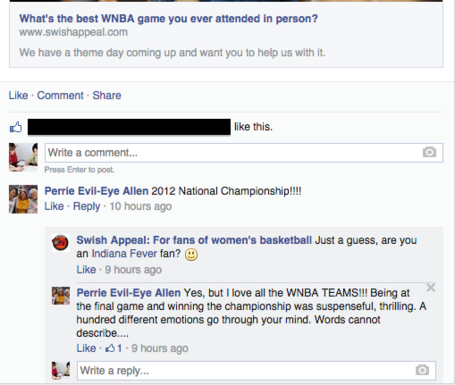 There have been many possibilities since my first game, Game 2 of 2011 Finals.

There was Game 2 of the 2012 Finals, coming back after a loss; either of the first 2 games of the 2013 Finals, where we destroyed Atlanta; the Atlanta game this year, with the double OT and Maya’s 48; or the Phoenix game after we finally had the team together, where the defense smothered them in the first quarter.

But then, there was the second game of the West finals. That was an amazing game, with the Lynx scrambling to stay in it after a horrible first quarter. Their determination to not lose, as Phoenix continued to play well through the 2nd and 3rd quarters. The spurt at the beginning of the 4th, which gave us back the lead. The response by Phoenix to catch back up and fight it out. The shot by Seimone and the free throws down the stretch, which locked it up. Going down to high five the entire time off the floor at the half, and to assure them that they were in it. Getting most of them on the way back out. Sneaking into better seats for the second half, and a final round of high fives at the end. Reeve and Maya were so stoked!! It would have been a great game anyway, but to be there and to share in the experience was tremendous.

One fan picked the 2009 Finals as a favorite moment:

That was definitely a very exciting series indeed, at least in part because that series went five games.

Nate lives in the Bay Area, and he leads a second crew of SB Nation bloggers at Warriors site Golden State of Mind. And you may just be wondering why he follows the Storm. Yes, there's no WNBA Bay Area team, but why does he like Seattle? What if I also told you that he lived in Seattle once upon a time?

Two of his favorite games came back in 2010, when Seattle had an undefeated home record in the regular and postseason, and won the title in dominating fashion. First was an 85-81 win over the Indiana Fever on June 25, when Seattle won 85-81. The win was definitely hard-fought, as the Storm had to claw back from a 60-49 deficit in the middle of the third quarter into a 71-70 lead with 4:24 left in the fourth after Bird drained three three-pointers before you could blink an eye.

Another game that came to his mind was the Storm's 91-85 win over the Phoenix Mercury on July 27. Like the Indiana game, Seattle was down at halftime, not because of an off-shooting night per se, but rather because the Merc were just controlling the game. The Storm even fell behind by 18 points at halftime, 56-38. But the Storm clamped down on defense in the third quarter while scoring a lot themselves, good for a 24-8 run, and this momentum continued through the end of the game. The win helped give Seattle a 12th straight win.

The Storm would eventually extend their win streak to 13 after beating Chicago on July 29, but lost to the Minnesota Lynx on August 1.

CharGrayJ liked going to a game in August 2013 against the Sky:

I checked my email one day and found that a very generous guy had offered me tickets to the game because he couldn’t make it.

I was like yeah! Surprise, there were 2 tickets so I asked my new roommate to join me.

On the way to the seats we just keep walking further and further down, until we got all the way down behind Chicagos bench.

EDD and Fowles ended up taking over and winning the game. I was heckled by a friendly Chi fan.

But the reason that was the best game was because of the up close and personal experience of seeing EDD, Fowles, Sloot, Prince, Pokey, and Swin Cash. At the end of the game I yelled "hi Swin Cash" and she smilef and said hi. I got to bond with my new roomy and met a new friend And also was touched by the generosity of the fellow that offered me the tix.

So it wasnt so much the "game" but more the experience. Since that game I get seats the closest behind a bench or very close to the floor because the experience is so much fun!

The first overtime game I had ever been too, the Mystics were (and still are) a very young team playing against the more experienced Los Angeles Sparks, who had Candace Parker, reigning WNBA MVP. I figured the Mystics would lose the game, because they weren’t as experienced, the Sparks had pummeled them last season, and they had a superstar. When the game was close, I began to have hope that they could pull it out. At the end of regulation, I began to lose some of that hope, until Ivory Latta hit that 3 to send it to overtime. The overtimes were kind of a blur, considering how long the game was, but I won’t forget it.

We had fans from some of the former defunct teams in the league contribute as well. For example, one Houston Comets fan replied to us pretty quick on Twitter:

Any Houston Comets game! The big 3 was the best! @SwishAppeal

In addition, LScheibe was proud to see the Sacramento Monarchs win it all back in 2005.

The Monarchs winning the championship!

I don’t remember anything about the game…just that we won!

These aren't the only favorite moments I saw from fans who attended a WNBA game, and some teams' fans didn't submit anything in time for the post. But if you didn't, please post your thoughts in the comments and we can still put them up here!

Thanks again to everyone who gave us responses.