The Phoenix Mercury were able to take advantage of the home crowd they worked so hard to achieve during the regular season and coast to a series-clinching victory behind a strong fourth quarter. Scoring 56 points in the paint, the Mercury took advantage of their size to book a trip to the WNBA Finals.

The Mercury knew that even though they were coming home to the comfort of their own beds, they were in for a dogfight in a winner-take-all Game 3 in the WNBA Western Conference Finals.

The Mercury continued to attack and take advantage of the one constant in this series -- their height and size difference -- outscoring the Lynx in the paint by 20, 56-36, to grab the first spot in the WNBA Finals.

Phoenix Mercury coach Sandy Brondello noted after Game 3 how Diana Taurasi's half-court shot not only got the crowd riled up going into the final period, but also gave her team a confidence boost.

After Minnesota tied the game at 67 on a Maya Moore layup with 1:25 left in the third quarter, the Mercury went on an 18-0 run stretching through to the 5:12 mark in the final quarter, creating an 85-67 advantage and Sandy Brondello's squad wasn't looking back. The Lynx were able to put in 11 points over the course of the final five minutes after the game was clearly in hand but the Mercury came out and handled its business.

The Mercury seemed a bit rattled down the stretch of Game 2, picking up technical fouls and fussing with the refs but there was a poise and a focus to the Mercury team on this Tuesday afternoon in Phoenix. 21 assists and putting all five starters in double figures really allowed the Merc to showcase the things that got them to this point. Diana Taurasi played like the greatest player in the world with 31 points --including a 50-foot third quarter buzzer-beating three-pointer-- along with seven assists and five rebounds. Griner worked her way to 22 and 6 but most of all, did a fantastic job of finding players for layups out of the double team, finishing with four assists. 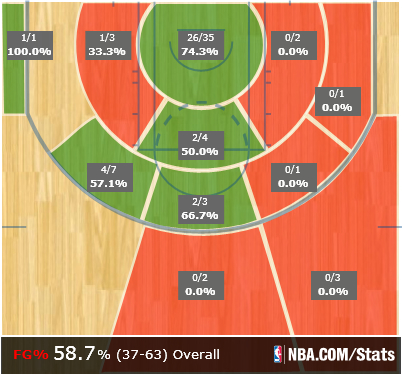 Here's a look at the Mercury's shot chart in the fantastic Game 3 win.

Minnesota did ride the horses that got them here as Moore, Augustus and Whalen all took at least 14 shots. Augustus and Whalen pulled out their best performances of the season, Whalen hitting two threes in a game for the first time in at least two years, finishing with 21 points, 7 boards and 20 points, 8 rebounds and 6 assists respectively. Moore was her usual active self for the Lynx but struggled on both ends, missing all five threes, turning the ball over four times and collecting five personal fouls.

Going into the off-season, Cheryl Reeve will want her crew to get healthy. You could see a season's worth of frustration boil over after her team fell behind deep in the fourth quarter and she picked up two technical fouls. She could potentially have at least four players competing with their national teams for the World Championships before heading into play overseas. Minnesota showed they still remain among the WNBA's elite but a lack of size and consistent scoring around the big three spelled doom for the defending champs.

Diana Taurasi's crew, meanwhile, heads to the destination that was desired from the time the team arrived in training camp. This victory adds so much sweetness to the Mercury's run as they had lost their last three Western Conference Finals appearances dating back to 2010 and have struggled with the Lynx for the last four seasons. Getting the proverbial monkey off their back by knocking off the team that's been the thorn in their back goes a long way towards building this team's confidence and focus going forward.

Now that we've gotten the ticket punched for the Western Conference participant -- and congratulations to the Minnesota Lynx organization on a great 2014 season -- who do you see coming out of the East?

A refreshingly young and hungry squad led by Tamika Catchings honed in on one last championship run for retiring head coach Lin Dunn? Or a feisty group of young stars in the making trying to piece together performances as the stress of injury and illness weighs down upon them during crunch time of a short WNBA season?

For more on this series, check out our Mercury vs. Lynx storystream.