Diana Taurasi took over the fourth quarter to lead the Phoenix Mercury to its first WNBA Finals since 2009.

I won't repeat everything I said in the first half. But despite Phoenix's great shooting inside in the first two quarters, they only shot 1-of-5 from three. That changed in the second half after they made 5-of-8 shots from deep, and still made nearly 59% of their shots overall.

GIF: Diana Taurasi closes the 3rd qtr with a buzzer beater from behind the halfcourt logo http://t.co/W1uyB4geey

And at that point, you knew this site was going to give a certain hashtag:

By the time Taurasi scored 13 straight points, I think we had to take it a stretch further:

And finally, even though Taurasi is known as a three point marksman where she was 3-of-5 from beyond the arc, she actually scored most of her points in the paint, and at a deadly rate: 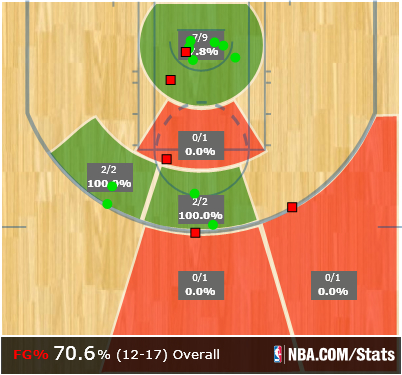 Points in the paint is what also was the X-factor in this game, besides the Phoenix Mercury season ticket holder base of course. Phoenix scored 56 points here, while Minnesota scored 36. That difference is the game right there.

Brittney Griner scored the last five points of that huge 18-0 run, and it was an exclamation point by then.

Yes, Lynx coach Cheryl Reeve gave a rant and got ejected from the game, but by then, it was just frustration from what was a really bad offensive showing during that critical 18-0 run Phoenix made, not to mention the entire game. Minnesota went 0-11 during that stretch.

The Mercury will face the winner of the Eastern Conference Finals after the Indiana Fever and Chicago Sky play on Wednesday. Does either team in the East have a shot against Phoenix during this round? Let us know in the comments below.

For more on the game and this series, check out our Mercury vs. Lynx storystream.