Here are some stats to show just how big this win was.

After Sunday's loss to France, there definitely was reason to be concerned with the USA Basketball women's national team's post play. France's Sandrine Gruda, a backup post for the Los Angeles Sparks, scored 26 points and grabbed 15 rebounds in their winning effort. Fortunately, Team USA turned things around with a 76-41 blow out win over the Czech Republic. Since this game wasn't on television or online streaming, we can only look at the statistics. Here are some trends that help explain the game

First, here's the graph. With the exception of TOV%, things didn't look pretty: 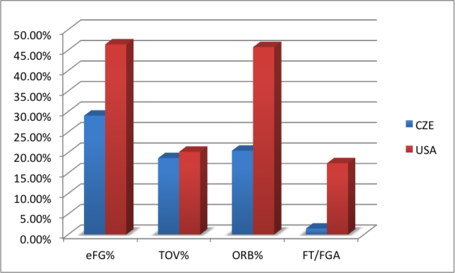 And here's a table so you can see the hard numbers:

In a blowout win like this when Team USA outscored the Czech Republic in every quarter, there is one word to describe it: PWNAGE.

Three pointers - The Czech team went 0-of-14 from deep. The Americans made 4-of-14 shots from three. The Americans' efficiency here wasn't good, but a 29% rate is still way better than zero. PWNAGE.

Free throws - The Czech team only attempted two free throws for the game, and made only one of them. The Americans made 12 out of 14 free throws. Ouch! PWNAGE.

Block differential - The Americans had nine blocks. The Czechs had one. You'd think that the next two players I'm going to talk about made most of those blocks. You're wrong. Maya Moore had three of them, and Breanna Stewart added three more. Even Sue Bird blocked a shot.

And did I forget to mention that Brittney Griner wasn't present either? Yikes! This is just unfair!

Oh yeah, I almost forgot. If the other categories weren't, this is PWNAGE to the next level!

Last Sunday against France, Tina Charles was the most efficient post where she scored in double figures off the bench. This may have helped her earn a starting spot for this game. Charles did not diappoint where she shot 7-of-12 from the field, grabbed 7 rebounds, and stole the ball four times. Ogwumike played off the bench, where she scored 12 points of 5-of-8 shooting and grabbed 10 rebounds. No Czech player grabbed more than seven.

Moore and Taurasi shot a combined 5-of-18 from the field. Sure, Taurasi made two three point shots out of her five attempts, but Team USA doesn't want to be seeing both of their top two perimeter scorers having off nights on the regular.

Though Team USA dominated the game here, the number of turnovers is still very high, and they may be unforced turnovers. Of the 19 turnovers Team USA committed, only eight came off of Team Czech Republic stealing the ball from them. And of the Czech Republic's 16 turnovers, 15 of them came from Team USA stealing the ball. I won't know for sure until I see the video, but this implies that Team USA may have been careless with the ball at times.

Onward to the World Championships!

The exhibition phase for Team USA is now complete. They now will head over to Istanbul for World Championship play. They will start their pool games against Team China at Abdi Ipekci Arena, at 3:30 p.m. ET. You can watch the game on ESPN3.

Update at 10:20 p.m. ET - Sue Bird blocked a shot in this game against the Czech Republic as we mentioned above. We would imagine it was like this one in the 2014 All-Star Game:

That was PWNAGE. She's not supposed to do that!