The USA Basketball women's national team suffered its first international loss since the 2006 FIBA World Championships by losing to France. We take a look at the statistics from the game to see if there was anything that stood out in this game.

The French national team won the Silver Medal in the 2012 Olympics, beating every opponent they played until facing off against the United States, where they lost, 86-50 (h/t theLaplaceDemon for the FanShot). This time, they got their revenge, winning 76-72 in front of a home crowd. Let's break down some statistics to help explain the outcome: 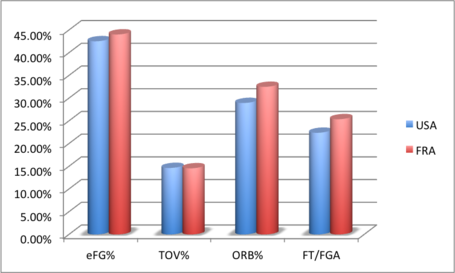 In a game where the final score was really close, it should not be a surprise to see that no team really stood out in any of the Four Factors, at least when you look at the whole game. But that sometimes can make stats fool you on the surface.

After all, after the first quarter, Team USA was up 20-6. At this point, many fans may have thought, "Hey, we got this." And they were still up at the half:

So what was the run that spelled the Americans' demise?

Key Period: France's 30-19 run, and making most of their free throws late in the fourth quarter

To be honest, the French beat the Americans from the second through fourth quarter after their cold start. But in the fourth quarter, that's when the French finally took full control of the game, without much scoring help from their star post, Sandrine Gruda, who also plays for the Los Angeles Sparks, who led the French scorers with 25 points. More on her later.

During the fourth quarter run, the French were able to turn around a 53-46 deficit to start the period, into a 63-62 lead with 3:40 left once Helena Ciak made a putback score from an offensive rebound. There was some back and forth from there until Celine Dumerc made a bucket to make the score 71-67 France with 27 seconds left. Maya Moore answered with a three for Team USA on the next possession.

After some more free throw back-and-forths, France point guard Celine Dumerc grabbed an offensive rebound with eight seconds left off a missed free throw on her own end with France leading 74-72. At this point, the ball was passed to Diandra Tchatchouang, who was fouled with four second left. Tchatchouang made the ice cold free throws at the end.

Gruda was the game's leading scorer and rebounder, given her lofty scoring and rebounding numbers. She did not score a point in the fourth quarter, but did grab three rebounds along the way. Given that Gruda scored her 25 points on 10-of-18 shooting before the fourth quarter, it's more than safe to say that France would have lost without her contributions.

Gruda's impact on the floor also went beyond scoring. She also had 15 rebounds, and two blocks for the day.

Moore and Taurasi would like to forget that this game happened. First, Moore scored 11 points, but she also did so shooting 1-of-10 from the field, and her only field goal was a late three pointer which was made once the game was the French team's to lose. Here is her shot chart from FIBA: 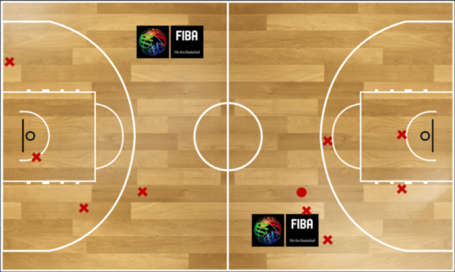 Taurasi was not much better, where she scored 10 points on 3-of-13 shooting. Here's her shot chart, also from FIBA: 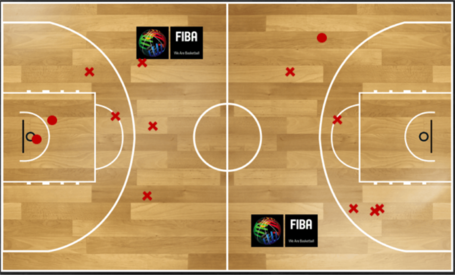 Given the talent level that Team USA has, they can probably weather the storm if Moore and Taurasi both have bad shooting performances. But they're going to have problems against a number of better opponents, especially when it appears that other players aren't stepping up.

Doug Feinberg of the AP wrote a column on Friday that the lack of low post depth was a concern, given that players like Candace Parker, Sylvia Fowles, and Elena Delle Donne weren't playing in the FIBA World Championships. Brittney Griner's status remains in question.

In this game, beyond Tina Charles, who scored 12 points on 5-of-10 shooting, no other post player appeared to have a standout game, even if she had a high field goal percentage. That also raises questions that I can't see unless we could have watched this contest live: Why weren't other post players given the ball when Moore and Taurasi were both going cold? And on the defensive end, how did Sandrine Gruda, who is a backup post on her WNBA team, have her way against Team USA?

Another post player, Stefanie Dolson, didn't play in this contest. Since it appears that Auriemma decide to go small ball, based on the personnel who played, it's likely that she will be cut from the team soon if Griner can play. Speaking about other players who may be cut, Kayla McBride and Skylar Diggins also earned DNP-CD's, despite the fact that other backcourt and wing players weren't pulling their weight.

Final Takeaway: Team USA is beatable, and they need Griner

Here's the obvious. Team USA's loss shows us that this team is not invincible, especially to other top ranked teams nationally. With Gruda having the kind of performance that she had along with the Americans' lack of an answer to her from the post, it is a sign that this team does need Brittney Griner, who should keep her and other top post players in check. At the same time, Team USA's best two perimeter scorers had an unforgettable night for the wrong reasons. Let's hope that that doesn't happen again.

Team USA will finish its pre-FIBA World Championships schedule against the Czech Republic in Prague this Tuesday, September 23, at 1 p.m. ET.