20 more minutes before we have our Western Conference representative in the 2014 WNBA Finals.

Share All sharing options for: Mercury vs. Lynx Game 3 halftime score: Phoenix leads 50-42 after superb performance at the basket

The Phoenix Mercury is beating the Minnesota Lynx, 50-42, and this game to be honest is pretty close to being a blowout, even though Minny has kept it close at times.

In the first quarter, the Mercury shot 65% overall, and made all 10 shots at the rim.

28-21 @PhoenixMercury lead it they shot 65%, 10-10 at the basket - this is why they’re ahead #WNBAPlayoffs pic.twitter.com/cMYFumgaUW

Even after the second quarter, things aren't looking too different and Phoenix is still performing well shooting at the basket: 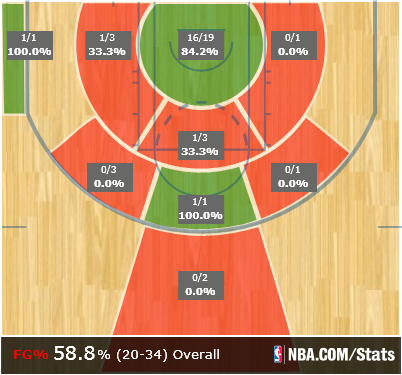 Leading the way is Brittney Griner, who scored 15 points, and Diana Taurasi who also added 15 more. Both are shooting well over 50%.

As for the Lynx, Lindsay Whalen shot 6-of-9 from the field, and made two three pointers, but besides Maya Moore and Seimone Augustus, there hasn't been too much help otherwise.

If the Lynx can't stop the Merc at the basket, there won't be much to fight for in the second half...

For more on this series, check out our Mercury vs. Lynx storystream.