What's next for the Chicago Sky after losing the 2014 WNBA Finals?

After losing the 2014 WNBA Finals to the Phoenix Mercury, what's next for the Chicago Sky? And what sort of offseason improvements should they be looking to make, aside from getting healthy?

Share All sharing options for: What's next for the Chicago Sky after losing the 2014 WNBA Finals?

Philip Hersh of the Chicago Tribune suggested in an article about the Sky's future on Saturday that "...Tennessee center Isabelle Harrison would seem to be a good choice for a team that needs more low post presence."

Whether Harrison is even available at the fifth pick remains to be seen - as of right now, it's really difficult to project four players better than her in the 2015 WNBA Draft - but Hersh's observation speaks to how badly the Sky's frontcourt was out-played in the Finals, despite that ostensibly being their strength given the presence of Elena Delle Donne and Sylvia Fowles.

It's a weird problem that has sort of plagued the Sky throughout 2014.

Among the weirdest things about the Chicago Sky's season was how they declined in rebounding across the board, going from the league's best rebounding percentage in 2013 (offensive, defensive, or total) to one of the league's worst.

Why Fowles struggled even in Griner's absence

After a dominant first half performance in Game 3, why did Sylvia Fowles struggle even with Brittney Griner out of the game? Her struggles point with some long-standing problems with the Sky.

The Sky's rebounding problems in the playoffs

The Chicago Sky weren't any good on the boards during the playoffs, which could make that a major key to their upset chances in the 2014 WNBA Finals.

Of the seven players on the Sky roster with more than a year of experience entering this season, not one rebounded at or above their career percentage (despite Courtney Vandersloot's career-high offensive rebounding percentage of 2.2%, which probably wasn't a primary part of the scouting report even when she was healthy). That's not simply a matter of health, but players who rebounded at a high rate in the past who just didn't this season. And the other rotation player, Elena Delle Donne, just hasn't been an impact rebounder at this point in her career despite considerable talent and height.

Yet paradoxically, that decline might also have offered an opportunity for the Sky in the 2014 WNBA Finals: the one distant hope for Chicago to beat the Phoenix Mercury was to just absolutely dominate the boards and bolster their offensive efficiency with second chance points. It's the one area that you could even begin to consider a weakness for the Mercury: they were one of the two teams in the league with a lower total rebounding percentage than the Sky during the regular season. The Sky had multiple players who were capable rebounders while the Mercury relied heavily on starters Candice Dupree and Brittney Griner for rebounding, who aren't exactly known for dominant boardwork.

Unfortunately, things didn't work out that way for the Sky: when you look at the series numbers, the Sky did actually win the rebounding battle overall but it simply wasn't enough of an advantage to get a win the series.

Composite Four Factors statistics for Games 1-3 in the 2014 WNBA Finals.

The Sky's rebounding in the 2014 WNBA Finals

Most of the Sky's rebounding advantage in the series comes from their Game 1 performance when they dominated the boards, but shot so poorly while the Mercury were shooting historically well that it didn't really even make a difference. 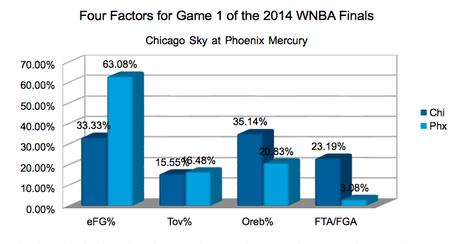 In the final two games, the Mercury won the offensive rebounding battle despite continued elite shooting. None of the stats really matter in the rout that was Game 2, but rebounding might have mattered in Game 3: the Sky finally shot well enough to keep pace, but just weren't able to out-rebound the Mercury. 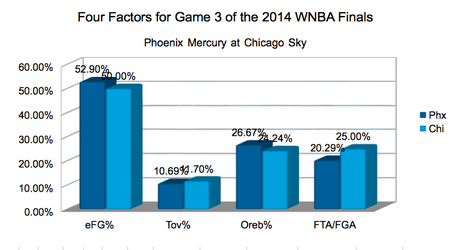 However, there's a reason why they weren't getting getting many boards in Game 3: they were clearly conceding rebounds and opting to get back on defense instead on many possessions. In fact, it was obvious that both teams were mostly conceding everything but offensive rebounds that they couldn't avoid in Game 3, which is a strategy teams employ to stop fast breaks - it's not a novel basketball philosophy and something that has generated quite a bit of (inconclusive) discussion in the NBA analytics community in the past. And after the Mercury beat the Sky 14-1 in fast break points in Game 2, perhaps the Sky had reason to be hyper-vigilant about transition defense.

But I'm going to defer to an article from a 2012 New Yorker article about the statistical value of rebounding: "Every team is limited in one way or another, and must play to whatever strengths it can, while giving some ground on its weaknesses."

In this particular series (or season), the Sky just weren't going to outshoot the Mercury: Brittney Griner automatically lowers your shooting percentage and even when Griner was out, the Mercury have Diana Taurasi and...you know how that goes (Vandersloot, for what its worth, did about as good a job on Taurasi as one could possibly expect but in the end it came down to size in a game where the goal is to put a ball through a 10-foot ring). It was almost given that the Sky would be outshot. But, especially with Griner out, there was at least a possibility of making up for some of that differential in shooting efficiency by getting second chance scoring opportunities -- if you're not going to outshoot your opponent, you have to find another way to get points.

Of course, it would be silly to say rebounding was the sole reason they lost the series, which included a pair of routs -- they were overmatched, as most of the league was against Phoenix this season, and there's only so much you can dig for answers.

Where do the Sky go from here?

Nevertheless, the Sky are headed in a clearly upward trajectory for the first time in their existence despite a poor showing in the Finals. As Hersh reports, Pokey Chatman intends to re-sign their four free agents and, assuming they stand pat otherwise, their oldest player will be Fowles at 28.

As Albert has described previously, the Sky are a testament to the Leonsis 10-point plan in a number of ways - it took a while to get to the Finals, but their commitment to putting young players around Sylvia Fowles and stockpiling lottery picks (despite an obvious mistake of trading the #2 pick in the 2012 draft) paid off. The question is whether they actually have to do anything to move forward beyond relying on internal development - they won the regular season title in the East last year and went to the Finals this year.

What the Sky really need is a Penny Taylor - a low usage wing with a high assist ratio who can be one more efficient point of entry to Fowles, which was been a problem for most of the franchise's history. Of course, it's not often that you find two-time All-WNBA small forwards who can shoot, pass, and defend -- everyone could use a Penny Taylor. But, in a way, the fourth quarter of Game 3 might suggest a player they might reasonably be able to move in search of another passer: 26-year-old Epiphanny Prince who played less than five minutes in the final period of their season.

Prince's production has been on a steadily downward trajectory for three seasons now and, with the emergence of Quigley as a more efficient backcourt scorer and the potential development of Jamierra Faulkner as a ball handler, they could afford to make that change. And although Hersh suggests using that fifth pick on a young player like Harrison, would a team that has a chance of returning to the Finals be better off packaging the pick to look for a veteran?

Regardless of what moves the Sky make this season though, they're in a position where it's legitimate to say just getting healthy will be the key to further improvement. And with a team that just made the Finals, there's only so much tinkering you can do before you're messing up a good thing.

For more on the championship series, check out our 2014 WNBA Finals storystream.