2014 WNBA Finals: The value of Candice Dupree and Penny Taylor's contributions to the Phoenix Mercury's title

Although Diana Taurasi's heroics at the end of Game 3 of the WNBA Finals solidified her place as Finals MVP after the Phoenix Mercury swept the Chicago Sky, the contributions of Candice Dupree and Penny Taylor can't be overlooked.

Share All sharing options for: 2014 WNBA Finals: The value of Candice Dupree and Penny Taylor's contributions to the Phoenix Mercury's title

Search the web for recaps of the 2014 WNBA Finals -- the entire series -- and Penny Taylor's significance barely gets a mention.

In fact, it's fitting that the one reason why Taylor earned a mention in recaps of Game 3 of the 2014 WNBA Finals was for hitting a pair of free throws with 9 seconds left to seal the Phoenix Mercury's long-expected title and securing a place in WNBA playoff history for Diana Taurasi's  spectacular three-point play on the previous possession.

While Taurasi humble brags that the big shots in big moments just seem to find her a lot and she just takes advantage, Taylor has the enormously undervalued skill of being stunningly efficient and productive despite those moments not finding her much at all as she defers to her All-WNBA teammates.

Philip Hersh of the Chicago Tribune wrote a great article in advance of Game 3 about how Candice Dupree's quiet consistency doesn't usually draw much attention -- and that was before she was left off the 2014 All-WNBA team -- and something similar could be said about Taylor: she fits blends in with the flow of the game so well that its easy to ignore her or take her granted.

And yet what has always been most impressive about Taylor is that she manages to make an impact statistically despite rarely seeming to capture the attention that others (deservedly) get.

Every championship team has a glue player, not just the blue collar enforcer or bench player who can give you a scoring jolt but the type of player who's versatile enough to give a team whatever they need in a given situation to free everyone else up to do what they do best.

For the Mercury, that has always been Penny Taylor. The 2014 WNBA Finals just another testament to how efficient she can be in that role of complementing and enhancing the games of others.

Mercury PVC chart for the Finals 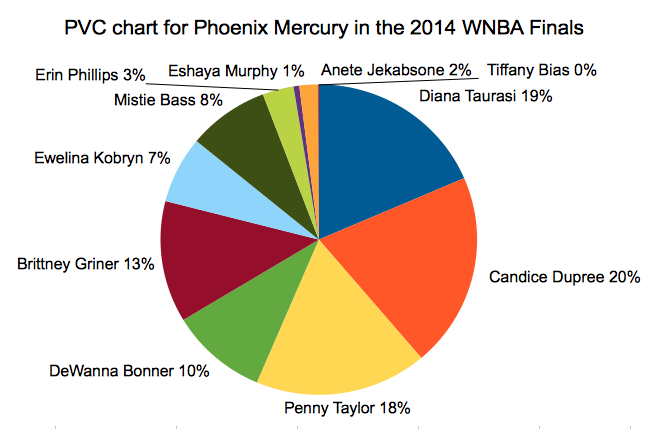 While Diana Taurasi stole the show in the end to solidify her case as MVP, Penny Taylor and Candice Dupree were right there with her as the top contributors for the Mercury

What really stood out in this series was Taylor's efficiency as a distributor: although Taurasi led the team with 19 assists, Taylor had 18 assists and just 4 turnovers. For a player that touches the ball as often as she does, that's remarkable efficiency -- her outstanding pure point rating of 9.19 is a testament to that. Nobody will consider Taylor a point guard, but next to a player like Taurasi who alternates as a distributor and scorer from play to play, Taylor's ability to make decisions with the ball efficiently from the wing is a major asset to the team. The fact that she's a legit scoring threat as well (true shooting percentage of 58.7%) makes her a threat who has to be accounted for on a team full of threats.

None of that is surprising - Taylor was the predictable x-factor before the series because, well, that's what she does - but it does bring us to the discussion of MVP.

Entering Game 3, the debate about Finals MVP kicked up with Griner being out. Nobody will quibble with Taurasi given what she did in the fourth quarter of Game 3, but I mentioned during the game that Taylor was getting lost in that discussion: through the first two games, Taylor was right behind Griner and Taurasi as the third biggest contributor on the team. Similarly, she finished the playoffs with the third-highest plus/minus rating on the team just ahead of Dupree. Although Taylor was sort of blending into the background as she often does, she was making a tangible impact - not enough to make an argument for MVP, but certainly worthy of more attention than she gets.

But Dupree did in fact deserve the attention she got as a Finals MVP candidate.

Going by Percent Valuable Contributions (20%), there's an awfully strong argument for Dupree as Finals MVP. The reason comes down to something quite simple: she was stunningly efficient after a season of efficiency.

Dupree shot 29-for-39 from the field during the Finals, which is incredible for a power forward who shot as many jumpers as she did. She was such a huge threat with Griner out of the game that the Sky's defense struggled to guard both her and Taurasi on the perimeter (and never did a good enough job).

Why do you run at Candace Dupree to take away a 20 foot 2-point jump shot and leave Diana Tarausi open for a top of the key 3-pointer?

With her ability to knock in shots from all over the court, she and Taurasi were lethal in the pick-and-roll -- there's just not much way for a defense to stop that. As Griner gets more comfortable with her mid-range game, that offense is going to be (even more) utterly impossible to defend not only because all of those players are efficient threats but also because they offer such excellent court spacing.

She set a record for consecutive made field goals to open a game in Game 1. While Taurasi's fourth quarter scoring outburst captured our attention in Game 3, Dupree tied her with a game-high 24 points. For a team that essentially won this game on the strength of their shooting efficiency, Dupree's team-high 75.22% true shooting percentage during the Finals was a huge part of that.

Dupree was an efficient pure scorer to complement Taurasi's dynamic play, which has its pros and cons.

Underlying that high scoring efficiency is another side of Dupree's game: her true shooting percentage is not significantly different than her 74.35% field goal percentage because she only got to the free throw line twice. She wasn't much of a presence on the boards at all with DeWanna Bonner and Eweline Kobryn picking up that slack during Griner's Game 3 absence. But those are small quibbles that you can only complain about abstractly: that is Dupree's game and she was her best self against her former team. She, like so many others, gave her team exactly what she needed and her value to the effort can't be easily dismissed.

But the very fact that there's room for a Finals MVP debate is pretty impressive on its own given how well Taurasi played: Taurasi was unreal statistically finishing the series with a true shooting percentage of 65.84% at a usage rate of 30.20% while also maintain an assist ratio of 24.57% over three games. And yet there's a legitimate argument for Dupree's statistical value topping the team, Taylor wasn't that far behind, and the only reason Griner fell out of the discussion is because she missed a game. That's incredible balance and Game 3 simply made the talent of that team that much clearer: yes, they needed Taurasi to impose her will and reaffirm her case for being the best in the world in the end, but it was the overwhelming talent of the entire team to that point that really made this team great.

For more on this series, check out our Mercury vs. Sky storystream.