Sylvia Fowles scored 21 of her game-high 27 points after halftime to lead the Chicago Sky to an 86-84 double overtime win over the Indiana Fever in Game 2 of the Eastern Conference Finals (video via WNBA).

What we saw in the Chicago Sky's Game 2 win was the Sylvia Fowles we've all been waiting for offensively, whether you're talking about this series, his postseason, or the last seven years or so.

After a quiet first half with 6 points and 3 fouls, Fowles scored 14 points in the second half while showcasing the full breadth of her talent as an interior scorer: off the pick and roll, on an alley oop, blocking a shot and running the floor to get a layup in transition, powering through defenders to score in traffic, off a lob, and with a drop step. She added another 7 in overtime, including a sweet step-back jumper.

You just don't see that combination of agility, power, and quickness elsewhere in the WNBA right now.

The 6-foot-6 center would ultimately finish with 27 points on 12-for-14 shooting along with seven rebounds. As outstanding as it was, this is what many WNBA fans have been expecting from the athletic 6-foot-6 center for her entire career: not only her asserting herself in the paint and imposing her will on opponents, but also having her teammates actually looking for her when she's open and allowing her to show off what she can do.

Although there were a number of twists and turns in the game, Fowles' dominance in the paint was arguably the most significant factor in the outcome: Fowles' shooting performance accounted for the entirety of the difference in shooting efficiency between the Sky and Fever in Game 2 as the rest of her teammates shot just 33.33% from the field. 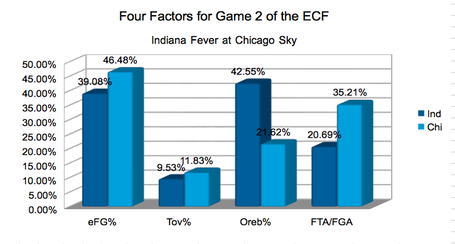 Four Factors numbers for the Indiana Fever and Chicago Sky in Game 2 of the Eastern Conference Finals.

Of course, it wasn't the perfect game for Fowles: 7 rebounds in the 42 minutes she played during this double overtime game amounts to a total rebounding percentage of just 10%, right around her season average and still probably falling short of expectations as the biggest player on the court in this series. But that just means there's room for an even more dominant performances to come.

For more on this game and the series, check out our Fever vs. Sky storystream.