The Mystics believed that they were playing the Stephen A. Smiths.

Ivory Latta did Ivory Latta things, and Kia Vaughn closed the deal to help the Washington Mystics win 74-61 over the Indiana Fever. The game wasn't as close as the final score indicated.

So what decided this game? The Fever was able to turn around a 15-13 deficit between the first and second quarters, and turned that to a 25-21 lead after Erlana Larkins made a shot with exactly five minutes remaining. From there, the Mystics went on a 16-4 run to close out the half, with Ivory Latta scoring 10 points in that stretch, on 4-of-5 shooting. This is what an Ivory Latta shot chart looks like (never mind about the one shot at the basket): 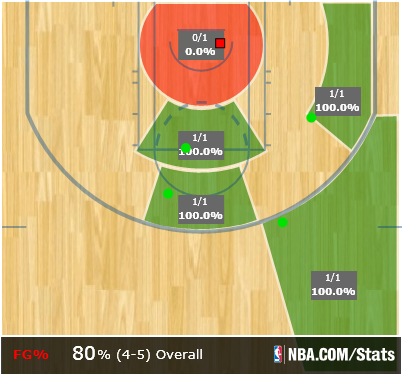 Once the third quarter started, Kia Vaughn took over, where she scored 12 points on 6-of-7 shooting in the period. Latta also had 5 assists in the period though she didn't score a point. Let me show you not one, but TWO shot charts for the period. First here's Vaughn's third quarter: 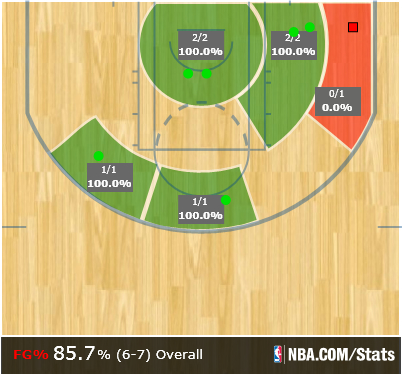 Now here's the Mystics' entire shot chart where they shot 11-of-13 from the field, eight of those field goals coming off of an assist. This was like a video game. 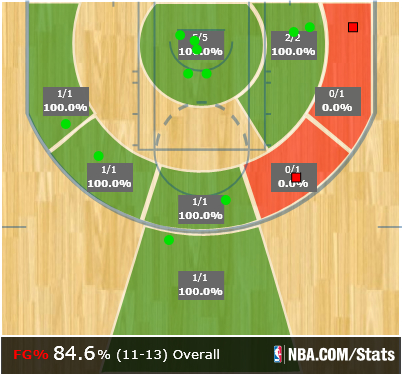 That third quarter was a 26-14 assault, and it gave the Mystics a 63-43 lead heading into the fourth. The lead went down some at that point where the garbage time players for both teams came in, but the last half of the second and the third quarter of this game was almost like a statement.

At the end of the game, Ivory Latta had 14 points and 6 assists, while Kia Vaughn had 22 points and 8 rebounds. Bria Hartley was the only other Mystics player to score in double figures, where she scored 13 points. The only con about the Mystics' performance tonight was a subpar performance from the bench, where Stefanie Dolson and Kara Lawson were the only players to score.

For the Fever, Shavonte Zellous scored 13 points, while Erlana Larkins added 11 points and 8 rebounds. Tamika Catchings also scored 11 points, but took 14 shots to get to that number.

As you may know, Mike Thibault was insulted on ESPN's First Take when host Stephen A. Smith mispronounced his name and didn't even get the name of the franchise correct while talking about men who are coaching the WNBA. The point was valid, and I actually agree with him.

But insulting Thibault and the Mystics in the manner that he did certainly didn't go unnoticed. You can bet that this game was a way for Washington to vent some anger for being disrespected on a national stage.

Maybe someone can make a new mashup about being disrespectful to Thibault here?

The Mystics head to Connecticut on Sunday to play the Sun. And this is definitely a team that Mike Thibault isn't fond of.

But seriously, if the Mystics play like this the rest of the season, they could win out and secure at least the #2 seed in the East.