The Chicago Sky came into Saturday's game seemingly ripe for revenge over the team that crashed the franchise's celebration of its first regular season Eastern Conference crown and corresponding playoff bid. Instead, Indiana brought back harsh memories of 2013, defeating the Sky 77-70.

Compared to what we saw from their Western Conference counterparts, Eastern Conference finalists Chicago Sky and Indiana Fever started off their matchup with a choppy first quarter.

With both teams combining for eight fouls and seven turnovers in the first quarter, you could see that defensive intensity and physicality were first up on the docket for this series. Throughout the first period of the game, the familiarity of the two teams since last year was evident. Indiana was being extremely physical with Elena Delle Donne (Tamika Catchings was on her for most of the game) and was Chicago trying to flip the script on their regular season performance by being aggressive attacking the paint, where Indiana was undersized for most of the night.

After a physical first quarter, Indiana led 21-18 behind 11 points from first time All-Star Briann January. The second and third quarters continued a lot of the same things. Indiana digging into Chicago and making it tough for them to score while manufacturing just enough points, mainly from Shavonte Zellous, who scored 11 in the quarters sandwiching halftime, and a surprisingly productive outing from rookie Maggie Lucas, who hit a three and a driving scoop shot over Fowles in a matter of :36 in the third after also nailing a three in the first quarter.

Going into the fourth, Chicago had knocked two points off its largest deficit of the night, trailing for 12, 48-60. Marissa Coleman bumped the lead back up to 14 for Indiana after she started the final stanza with a step-back jumper before Chicago fought its way back.

An 11-0 run capped by a step-back trey from Quigley got the Sky within 62-59 before Catchings split a pair of free throws to break the scoreless drought. Fowles completed an and-one to pull Pokey Chatman's squad within one but that would begin a stretch of just under 4 minutes where the Sky couldn't score. Save a Zellous three at the 6 minute mark, neither term scratched again until Tamera Young split a pair of free throws with 2:32 left. Indiana then went 8-10 down the stretch from the free throw line to seal a 77-70 victory the fourth-seeded Chicago Sky, taking a 1-0 lead in the Eastern Conference finals.

Indiana has to be pleased they were able to win a game where Catchings shot 2-for-12 and finished with 10 points. Erlana Larkins grabbed 8 boards but was mainly ineffective as she saw foul trouble all evening battling the larger frontcourt of the Sky. It was January early (finished with 19 points, 3 treys) and Zellous later (18 points, 3 treys) with a burst of energy from bench youngsters Lucas and Lynetta Kizer that allowed Indiana to protect home court. 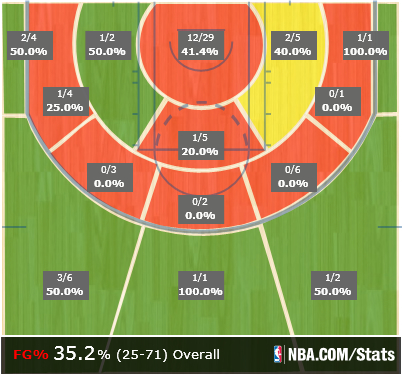 A shot chart showing exactly how that Indiana offense broke down. Click the title above to see a larger version. Check out our Facebook post with their fourth quarter shot chart.

If Indiana can defend as they did in Game 1, (this team finished third in the regular season in points allowed per game at 75.1) they could find themselves in great position to steal this series on the road Monday. Three point shooting came to the Fever's rescue in this game as 9 of their 25 (36%) field goals were from deep. They aren't necessarily known as a three-point shooting team but they did manage to sneak into the top three in the regular season and when you look at the roster, you can see why.

Limping into the playoffs the way they had to, Chicago knew they would have to be road warriors if they wanted a shot at a championship but letting this game slip away has to be disappointing. I expected Chicago to come out and play loosely after finding what can be considered second life after being left for dead -- down as many as 20 -- in Game 3 against the Atlanta Dream but that didn't happen. The Sky seemed out of sorts and scrambling for a response to the physical, over-helping defense they were seeing from the Fever.

After speaking about wanting to play Delle Donne more at the four to "keep her from chasing perimeter players around all game long" -- reasoning, or at least the facade of reason, that never really sat well with me anyway -- Sky coach Pokey Chatman pulled EDD out to the perimeter in what seemed to be an attempt to shed her of Tamika Catchings in ways Elena couldn't on her own.

Sylvia Fowles abused her advantage inside to the tune of 20 points, 14 boards and 3 blocks. Delle Donne took only 12 shots and made half of them but never really looked comfortable scoring her 14 points. Allie Quigley continued her fantastic season with 14 of her own and Jameirra Faulkner looked useful in short stints, using her speed to get past defenders but that was it for the Sky.

Courtney Vandersloot and Epiphanny Prince looked extremely pedestrian offensively (3-for-11 shooting) and had a large part in giving up 37 points to the Fever's backcourt of January and Zellous. These two players must perform in order for the Sky to have a chance in coming back in this series. The Sky didn't allow the Fever to have their way -- in fact, the Fever shot just 35% from the field in Game 1 -- but there was a comfort to Indiana's attack as they only turned the ball over 4 times, which the Sky were only able to turn into 2 points.

In addition, that field goal shooting stat is quite misleading. As I mentioned earlier, 9 of Indy's 25 baskets were threes, which accounts for 27 of their 77 points, or 35% again. Chicago finished amongst the league's best in terms of three point shooting defense by percentage so if there is confidence to be found from this game, they could look back at that number.

If the Sky can duplicate the front-court advantages it created in this game and do a better job of finding shooters, the Sky could have a great game plan to allow themselves to sneak into the WNBA Finals in similar fashion to their first round upset.

For more on this game, check out our Fever vs. Sky storystream.