Lynx vs. Mercury, Game 1 halftime stats: Minnesota settles for jumpers in first half

Share All sharing options for: Lynx vs. Mercury, Game 1 halftime stats: Minnesota settles for jumpers in first half

LaChina Robinson mentioned on the NBA TV broadcast that the Minnesota Lynx had just two assists in the first half and were relying heavily on individual play, which showed up in their first half shot chart. 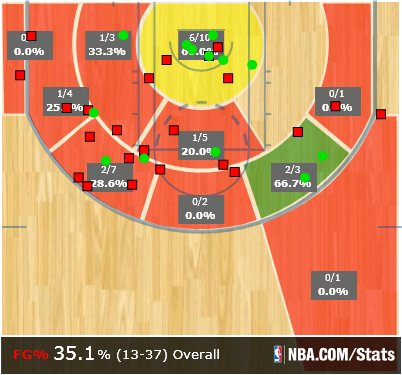 Minnesota Lynx first half shot chart in Game 1 against the Phoenix Mercury.

That's a lot of long twos off of one-on-one play for a team that has been so efficient moving the ball for the last three years. In the chart above (with NBA dimensions) - four of those shots are threes - about half of their shots came from the mid-range. Maya Moore was part of their overall shooting woes, going just 1-for-6 in the first half - we'll see if she continues to struggle in the second half.