The Washington Mystics were eliminated by the Indiana Fever in the 2014 WNBA Playoffs. And now, let's talk about what they need to think about heading into the 2015 season.

After the Washington Mystics' playoff series loss to the Indiana Fever, it was clear that one of the main issues that prevented them from winning this series went beyond tactics - it was talent.

The Fever had a superstar in Tamika Catchings who could step up at the right time, while the Mystics didn't.

Don't get me wrong: some younger players have shown potential that they can be long term pieces. But the Mystics still need an elite talent to be a legitimate contender.

Therefore, after two consecutive seasons of .500-ish ball, the Mystics are now close to getting on the "Treadmill of Mediocrity." It is up to General Manager and Head Coach Mike Thibault to do whatever it takes to prevent that from happening, and by any means necessary. 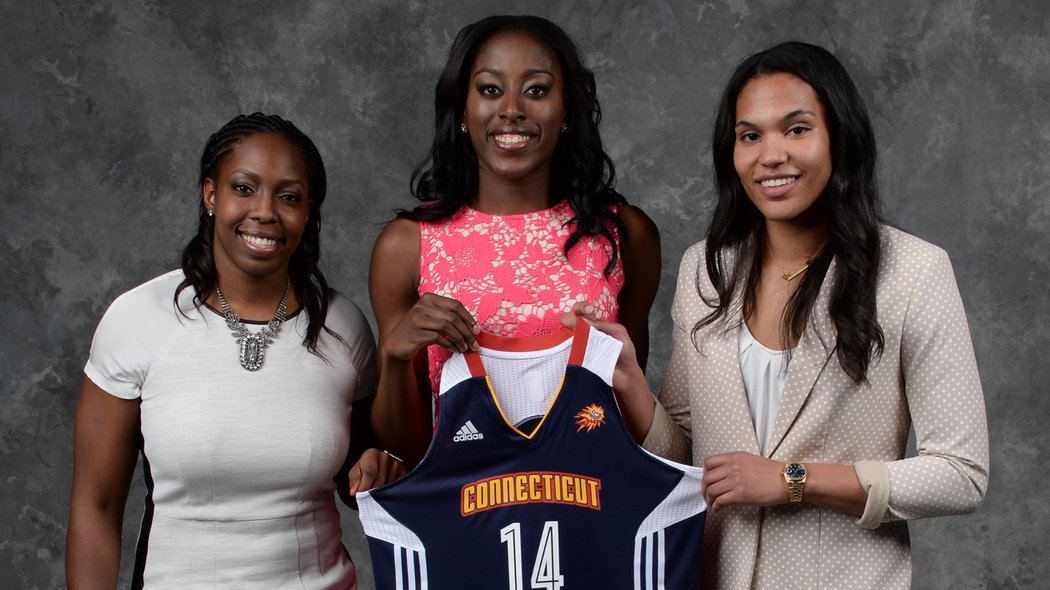 One way to help gauge how much talent a team has is by looking at each player's draft position. More specifically, franchise players are drafted in the lottery, typically first or second overall, although some third and even fourth picks have had outstanding careers as well.

Nevertheless, having a first pick overall practically guarantees a team an All-Star. Most will play in this league for 10 years or more. Here's the list of those players.

So, how many lottery picks does each WNBA team currently have? Because the league contracted from 16 teams in 2002 to its current size of 12 back in 2010, the number of lottery picks each year has fluctuated. For our purposes, we will only consider first through fourth overall picks, regardless of what year the player was drafted.

*Liz Cambage did not count in this total.

The Mystics are tied with the Stars for the least amount of lottery picks on the roster. The highest draft pick on either of those teams is third.

Not surprisingly, some of the WNBA's most talented teams like the Los Angeles Sparks and the Minnesota Lynx are made up of mostly Top-4 picks. It might be surprising that Phoenix has only two Top-4 picks considering that the team had a 29-5 record, but the two Top-4 picks were also #1 overall, namely Diana Taurasi (2004) and Brittney Griner (2013).

Now here's the second barometer to show the lack of talent the Mystics have to work with. Let's only look at the players who are or will be 25 or younger during the 2014 calendar year. Which teams have the most lottery picks who are 25 and under?

*Liz Cambage did not count in this total.

Note that the Dream, Fever, and Liberty, have no Top-4 picks 25 and under. In Atlanta's and Indy's cases, they all have rosters with a better chance to contend than Washington does anyway. And in New York's case, the Liberty acquired Tina Charles which cost them their 2013, 2014, and 2015 first round picks, the latter two being Top-4 selections.

How many lottery picks will each team have in 2015?

The simple answer is that we don't know. So we have to make some assumptions.

Three teams will add a 2015 Draft Lottery pick to their totals: the Seattle Storm will add the first overall pick, the Tulsa Shock will add the second, while the Connecticut Sun will gain the third and fourth picks.

And let's assume that all non-rookie Top-4 picks who missed the 2014 WNBA season will come back and play for their last teams for 2015. That means:

Finally, let's assume that no Top-4 pick retires/sits out from the WNBA in 2015, AND that everyone remains on her 2014 team. Here's how things might look like with how many Top-4 picks each team has overall, regardless of age:

Now, we're seeing Seattle, Connecticut, and Tulsa make some considerable jumps here in terms of the number of Top-4 picks. San Antonio and Washington remain at the bottom.

So let's look at the number of Top-4 picks for each team in 2015 only with players who will be 25 or younger during the calendar year:

We now see Minnesota and Chicago join Atlanta, Indiana, and New York as teams without a Top-4 pick who is 25 and under. This is because Maya Moore, Devereaux Peters, Courtney Vandersloot, and Elena Delle Donne will turn 26.

However, the two teams with the most Top-4 picks under 25 are the Shock and the Sun, the same two teams that were considered young, rebuilding teams like the Mystics.  And as you can see the Mystics still will only have Tayler Hill as a Top-4 pick who is 25 or younger. Their 2015 first round pick will be 8th.

Sure, it's nice to see that the Mystics performed better than the Shock and the Sun in 2014 despite having fewer draft lottery picks. But at the same time, having less talent limits trade options, and lower picks generally don't have careers like lottery picks do.

Ultimately, this picture shows that the Mystics' future is bright because Mike Thibault is a great coach. But the paradox is that his great coaching also contributes to the Mystics' talent issues.

Quibbles with this metric 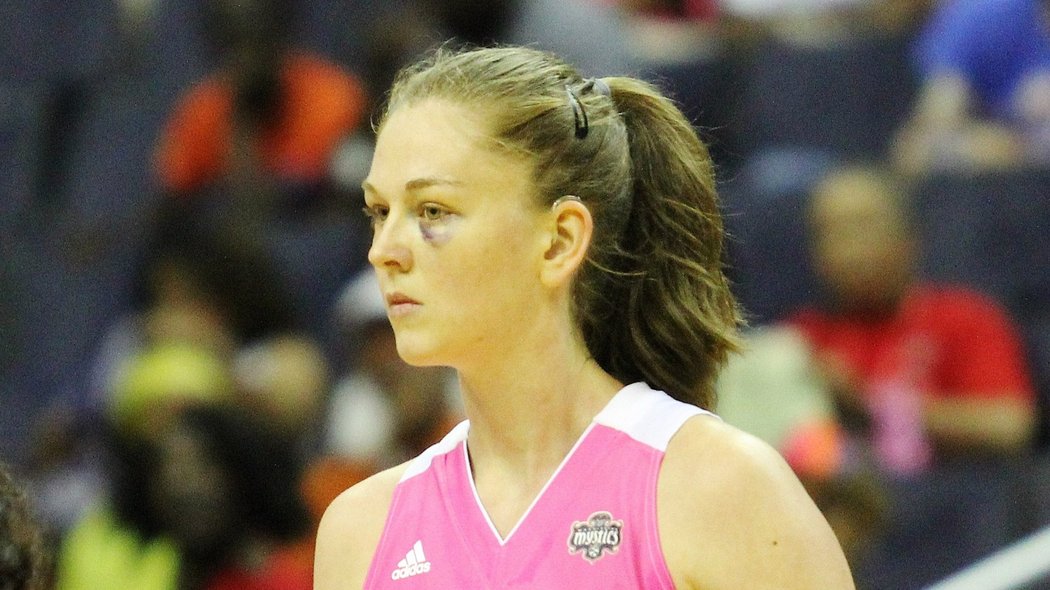 This metric isn't perfect, but here are some pre-emptive responses to those who will point at the flaws about draft lottery picks as a talent barometer:

Trades can be made before the 2015 season. Mentioned that already in the assumptions beforehand.

Some players will turn 26 after most, if not all of the 2015 WNBA season is complete. This is a legitimate complaint. Delle Donne turns 26 on September 5, 2015. Peters turns 26 on October 8, 2015. To keep things simple here, age for each player is calculated as how old she will be on December 31 of that year. Both Delle Donne and Peters will be 26 on December 31, 2015, and were calculated accordingly.

Some lottery picks aren't playing like superstars. That is one flaw, especially with charts showing the number of Top-1 through Top-4 picks regardless of age.

On the one hand, top picks who are over 30 years old often aren't playing at a high level anymore, like Sue Bird of the Seattle Storm. On the other, Marissa Coleman, for example, is a #2 overall pick who plays for the Fever, but is no superstar. And there are numerous other players who never became stars at the #3 and #4 selections.

This metric writes off non-lottery picks as being unworthy of being superstars. WNBA rookies are a) generally older and more polished than their NBA counterparts and b) about the same age, which makes the WNBA draft process easier.

Yes, some later first round picks like Penny Taylor and Katie Douglas have been multi-time All-Stars even though they haven't been A-list superstars. And Becky Hammon is the only undrafted player to be a legitimate superstar. But in Hammon's case, there should be an asterisk on that: Hammon was eligible for the 1999 Draft, and most draftees were directly from the ABL after it folded that year.

That ability to find talent later in the draft helps balance out the inevitability that some top draft picks aren't performing at a top level.

Why does this matter to the Mystics? 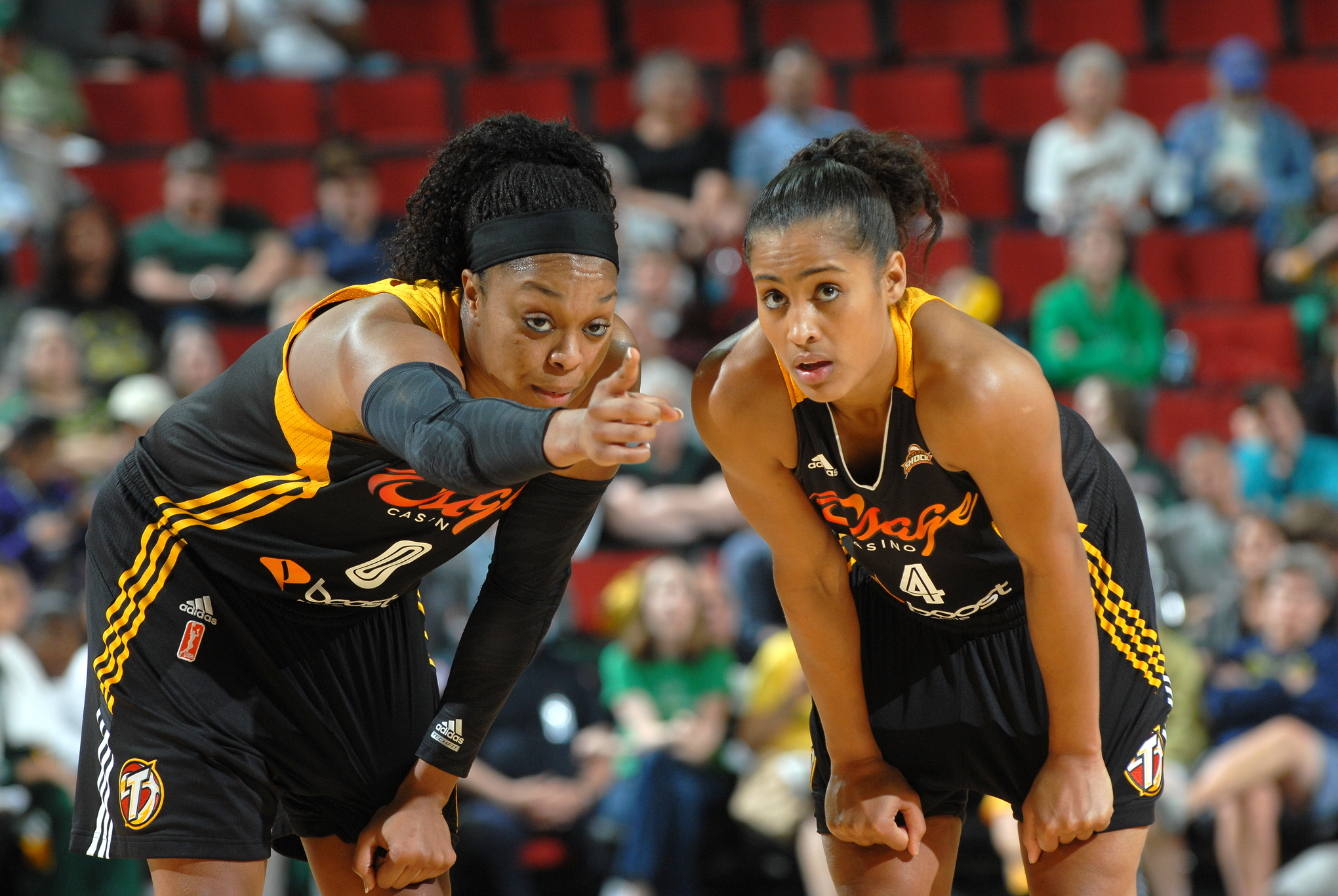 The Shock has more lottery picks than the Mystics, and is poised to become the next WNBA powerhouse because of it. Photo by Terrence Vaccaro, NBA

There are two main reasons why the Mystics need to care about the number of lottery draft picks that they have. They are because:

Sure, the Mystics have some mid-first round picks who are performing well, like WNBA All-Rookie team honoree Bria Hartley and fellow UConn alumna Stefanie Dolson. And second round pick Emma Meesseman was the team's best player in 2014.

But even then, the odds are firmly against the Mystics contending given what they have. Therefore, Washington either has to acquire younger players who are lottery picks and elite talents through trades. Or they will have to miss the playoffs to potentially get an opportunity to draft such a player.

I'll admit that I believe that the Mystics must tank 2015 so they can get in on the Breanna Stewart Sweepstakes. If they get lucky, having someone like her on the Mystics should make this team a contender with Thibault leading the way. That's not to say I'm past the point of no return that Thibault can pull off another major trade where a superstar could come to D.C., without sacrificing most of the team's younger players in the process. But, I'm really close.

It's now up to Thibault to make sure that that player comes to D.C., sooner rather than later. Here's hoping that he can.