2014 WNBA Playoffs: How the Chicago Sky beat the Atlanta Dream in a classic first round series

Having caught our breath from a thrilling Game 3 that propelled the Chicago Sky past the Atlanta Dream and into their first-ever Eastern Conference Finals, we look back at classic performances from two of the league's biggest stars.

Share All sharing options for: 2014 WNBA Playoffs: How the Chicago Sky beat the Atlanta Dream in a classic first round series

You can never force the circumstances that create a classic moment in sports, which is part of the very reason we tune in and watch instead of just ignoring games with long odds or abandoning teams that seemingly have no hope.

The best moments are those that somehow manage to define the odds, whether evolving or preceding the first tip and the 2014 WNBA Playoffs has already produced a classic in the first round.

What might be hard to appreciate in retrospect about the Chicago Sky's dramatic 81-80 win in Game 3 against the Atlanta Dream is that it really seemed like that game was over long before the fourth quarter began.

Every fan makes the decision that a game is no longer worth watching at a different point, but rookie Shoni Schimmel's alley oop pass to Tiffany Hayes out of a halfcourt set to put the Dream up by 19 points with 3:28 left in the third quarter certainly felt like that point of no return for the Sky for those that even chose to watch that long.

The Dream were at home, playing loose, and figured to be coasting back to the Eastern Conference Finals where they've been a fixture over the last four seasons. A few minutes prior to that play, Hayes had another emotional moment as she raced up the court loosely handling ball through lethargic Sky defenders to score a near coast-to-coast layup off a turnover that left her bouncing off the court to her team's huddle as Sky coach Pokey Chatman called a timeout.

The Sky had done well to even keep the deficit from ballooning over 20 to that point, but they just looked defeated - already walking off the court emotionless after Hayes' fast break layup and later playing flat footed defense before Hayes converted the alley oop.

Really, you'd be forgiven for turning that game off in the first half - despite entering halftime down 13, they had been down by as much as 20 points in the second quarter and just didn't seem to have what it took to win on that night. But certainly after three quarters of shooting just under 40% and getting killed on the boards by an aggressive, athletic, and hungry Atlanta team that appeared to be feeding off the energy of a home crowd, there just wasn't any reason to think that they'd suddenly turn it on in the fourth quarter.

Elena Delle Donne had other ideas.

What ultimately separates the superstars in pro basketball from All-Stars is the ability to manufacture wins, even against long odds - having the talent to earn the trust of their teammates and coaches makes them, but making it a habit defines them.

As this was just Delle Donne's second postseason experience, she has yet to prove that she's the type of star who can carry a team consistently but she showed an uncommon potential to will a team to victory in Game 3 against the Dream.

The fact that Delle Donne poured in 17 points in the fourth quarter against Angel McCoughtry -- who holds the all-time record with 19 points in a quarter - wasn't quite as impressive as the way she got those points. 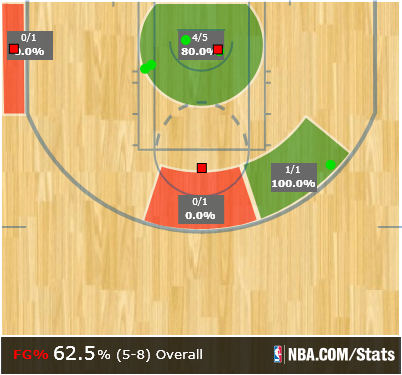 Despite her considerable ability as a 6-foot-5 player with a sweet jump shot, that fourth quarter was testament to the fact that she's not merely a jump shooter (for anyone still confused) - she's a player with the potential to get whatever shot she wants when she wants it when her team needs it. And she's not afraid of scoring over defenders or through contact.

Five shots in the paint in addition to six free throws is 17 points the hard way - one three notwithstanding, Delle Donne just decided her team wasn't going to lose and got the most efficient scoring opportunities possible on the court.

Everyone who pays attention to the game probably had faith prior to the game that Delle Donne was capable of doing something like that, but after a season shortened by a flare up of Lyme disease and getting swept out of last year's playoffs we didn't have anything concrete to prove it just yet.

She finally gave us the historic effort that everyone believed she was capable of on Tuesday night. And it might have been even more impressive given that Angel McCoughtry seemed to grab hold of this series herself in Game 2.

The 39 points that McCoughtry scored in the Dream's season-extending Game 2 win on the road almost makes her the team's MVP for this series by default, but her defensive performance not only added unquantifiable value to that argument but also contributed to that feeling that the Sky were done through three quarters in Game 3.

McCoughtry scored 14 of her 39 in the fourth quarter while helping to hold Delle Donne to just 6 points on 0-for-5 shooting in the second half of Game 2 in Chicago, making it seem that Atlanta had figured out the formula for how to win this thing. As Chatman would say after that game, "I don't think they made a lot of adjustments. They went harder and we have to go smarter and harder." The Dream made it seem like this series was theirs for the taking in Game 3 as the more experienced hosts who had a star in McCoughtry with the proven ability to win multiple games for her team if necessary.

For Delle Donne's part, the combination of McCoughtry's energy on defense and her lack thereof as she continues to work her way back into shape just seemed to further reinforce the belief that Chicago would come up short in Atlanta.

"I think, more than anything, I'm still trying to get my legs under me," Delle Donne said after Game 2, according to a Sky release. "So, I think that's why you kind of see a little bit of a downfall on offense but I try to really stay connected defensively and do all I can to really help my team that way. I think it will be a process to continue to get my legs under me."

Even going back to Game 1, Delle Donne went 0-for-3 in the final 10 minutes - whether due to fatigue or McCoughtry's defense, it just appeared that Delle Donne wouldn't have what it takes to come up big. And it adds to the somewhat tragic reality that Delle Donne is a star whose talent could be compromised by factors out of her control at any time, even as she was doing her best to win that battle.

Everything about this series was set up for the Sky to fall in Game 3, even if the keys to winning remained clear on paper. By the end of that third quarter, a series that had already been leaning toward the defending champion and top seed for a couple of days no longer seemed to be in doubt.

After Chicago's Game 2 loss, Chatman outlined three perfectly reasonable things her team would have to do to beat the defending Eastern Conference champion Atlanta Dream.

"There are three areas of play that we understand we have to have and limit Atlanta in, if we want to be successful," Chatman said, according to a Sky release. "We were 0-for-3 in those areas. First, is their transition game. They scored 31 points. Second, they scored 22 points off of our 15 turnovers. Third area was on the boards. Against a team that's hungry and trying to stay alive you can't have that."

All of that is true - all things that we covered in the process of previewing the two teams before the series began. Yet if you really want to boil the whole series down to one thing, shooting efficiency - both byproduct and contributor of the things that Chatman described - was arguably the deciding factor. And not just overall efficiency, but fourth quarter shooting efficiency.

Fourth quarter shooting percentages in the first round series between Chicago and Atlanta.

Beyond the numbers, all three games in this series came down to individuals making big plays in big moments - despite Delle Donne going cold in Game 1, it was x-factor Courtney Vandersloot coming up big with a game-winning shot in the final minute. The emerging context created by that kind of playoff series magnifies mistakes - like taking threes without regard for time and score - and glorifies the stars who emerge victorious, perhaps giving them undue credit for the outcome. And in one of the best individual duels in a WNBA playoff series in recent memory -- especially in that they were actually going against each other in the final moments -- Delle Donne managed to outshine McCoughtry.

Complex Magazine made a Facebook post about the game, giving Elena Delle Donne's performance in Game 3 the ultimate compliment by calling it "Jordanesque". Fittingly, it was basketball legend Michael Jordan is credited with responding to the mantra that "there's no 'I' in team" by saying "there is an 'I' in 'win'."

Even if that dichotomy oversimplifies basketball quite a bit, the NBA has thrived in part because the postseason served as a public pressure chamber where superstars were forged from the most talented individuals as their heroic feats of athleticism carried their teams to the top and the league wholeheartedly embraced them to turn them into superheroes. We may all value team play in principle, but it's the athletic superhero narratives that entertain the casual fan and help a league establish itself in the consciousness of the mainstream.

For as much as supporters of the WNBA are quick to celebrate the league as a more "pure" form of team basketball that lacks the distraction of ego-driven hero ball that can, at times, taint NBA basketball, the league needs those narratives of superhuman performances - just as the NBA, NFL, and MLB did - to take the leap into mainstream popularity.

And while we have plenty of candidates to become the next group of heroes to take the torch from the league's founding stars, this first round series is exactly the type of thing that the WNBA needs more of. Delle Donne simply wasn't going to take no for an answer in Game 3 and brought the attitude to bear on the game in ways that most players simply can't.

It was a three-game series that makes the case for expanding the length of these playoff series, despite obvious logistical constraints. Every game came down to the teams figuring out how to make plays in the fourth quarter, each game made more dramatic than the previous as the stakes got higher. And the outcome of the series was ultimately determined by MVP-caliber stars coming up big under pressure to lift their teams to victory.

Delle Donne finding ways to score in the fourth quarter of that game captured our attention; everything that led up to that final shot going back all the way back to Game 1 created the essential element of disbelief in spite of solid expectations that turns great moments into classic ones. And Delle Donne's situation is a sobering reminder that we have to appreciate every one as they happen.

For more on the series, check our our Sky vs. Dream storystream.