Why the Phoenix Mercury beat the L.A. Sparks in the 2014 WNBA Playoffs

After the Phoenix Mercury ended the L.A. Sparks' season in the first round of the WNBA Playoffs for the second consecutive year - this time handing the Sparks a blowout loss at home - it's painfully obvious that they need to make changes this offseason.

Share All sharing options for: Why the Phoenix Mercury beat the L.A. Sparks in the 2014 WNBA Playoffs

Back before the 2012 draft, I wrote that Nneka Ogwumike was the obvious pick for the L.A. Sparks but that maybe they'd consider a trade because she wouldn't fit that roster as long as Candace Parker was there too. But ultimately, as I would later write before the 2013 season, that's just the kind of situation where you take the best player available and figure everything out later.

Well, it's now "later". And the Sparks are well past the somewhat benign point of being at a "crossroads".

The problems that were predictable before the draft were evident in 2012 and severe by the end of 2013 when their season ended in the first round on a last second shot by then-Phoenix Mercury rookie Britney Griner. Now having lost in the first round to the Mercury again, women's basketball fans that have spent so much time foisting unreasonably high expectations on this team need to accept a simple fact: this isn't working. More specifically, having ended this season with a blowout loss to the Mercury at home after ending the 2013 season with a one possession loss to the Mercury at home, it's difficult to avoid the surface-level impression that they're going backwards.

Sparks star Candace Parker probably summarized their problems in their most simply quantifiable form in a recent article by Ramona Shelburne of ESPN.com:

In years past, we had a lot of talent and we just won games because of it. I think those things we were getting away with the last couple years have kind of caught up to us and are the reason we're losing in the last minutes of games.

There's 10 games this this year that probably could've gone the other way, and if we'd have won those 10 games, everybody would be like, 'Oh my gosh, you guys are so great.' But we wouldn't have been great.

And Parker is almost exactly right: in games decided by two possessions or less, the Sparks were just 4-7 this season; in 2013, they were 8-1 in two possession games and mostly avoided such circumstances with blowouts. But to her point, even saying they're going "backwards" might not give just due to how serious their problems are: they've just been "getting away" with these inherent problems because winning games obscures their serious fundamental problems.

As described at length earlier this season, there were some changes this season that might have contributed to that outcome:

Might things have been better if Toliver had been around all season? Possibly, but even that obscures Parker's larger point about the team playing merely satisfactory basketball even last year. A lot of those issues go right back to the fact that their best two players -- Ogwumike and Parker -- play the same position, which means playing them together causes problems and playing one at a time means putting a less talented lineup on the floor.

But those are just the problems that are easy to assess on paper -- Parker echoed the sentiment from that ESPN article and added some insight into what's going on beneath the surface of this season's turmoil after their Game 2 loss.

"We didn’t behave or act like a championship team from start to finish," Parker said, as reported by Aaron Fischman in his recap of Game 2 for Swish Appeal. "From the championships that I’ve won in college, dating back to high school, Olympics, things like that, you do it from start to finish. You can’t just start doing stuff in the postseason ‘cuz it’s a new season."

To Parker's point, constantly see reports out of L.A. mention effort, leadership, mentality and will - this isn't solely about what shows up on paper. But if rebounding at all reflects desire, that's probably a good place to start for what went wrong this season.

The most damning thing about this year's loss to the Mercury was the rebounding differential. You might recall that the Mercury's one significant weakness this season was their rebounding: they were second-to-last in rebounding percentage (47.4%), offensive rebounding percentage (22.3%), and second chance points (8.09 per game), according to the data provided by the Lynx (and poor Seattle Storm for being last in every one of those categories...and a couple of others). The reason for that isn't just that they're a good shooting team that doesn't need offensive rebounding but that neither of their starting frontcourt players - Candice Dupree nor Brittney Griner - are great rebounders. 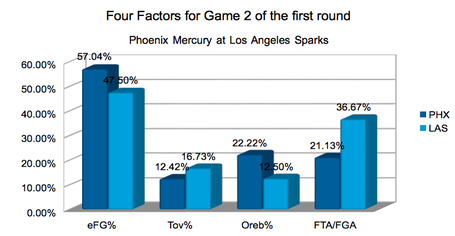 The Four Factors statistics for Game 2 of the first round series between the Phoenix Mercury and L.A. Sparks.

So the one advantage you'd definitely expect the Sparks to establish in this series, just based on what we'd assume about the Sparks frontcourt based on reputation, was on the boards. And yet, Phoenix somehow managed to crush L.A. on the boards in Game 2.

The 34-25 rebounding advantage in the box score might not even fully reflect how badly the Mercury won the battle of the boards: the Sparks were held to an extremely low offensive rebounding rate of 12.5% for the game and didn't even have an offensive rebound at all in the second half.

In fairness, the Sparks actually weren't a great rebounding team to begin with this season, but that just further highlights a major problem with the roster as currently constructed: the primary value of even starting a big frontcourt would be to win the rebounding battle and have possibly dominant post scoring. Far too often, that just didn't happen for the Sparks, meaning they were conceding a defensive disadvantage without gaining any benefit from their size advantage.

Four Factors statistics for the L.A. Sparks during the 2014 WNBA regular season.

All of that compounds the aforementioned problems: if they're starting three bigs who are neither significant 3-point threats nor dominant offensive rebounders nor perimeter defenders, it becomes extremely difficult to win consistently. Even having one of those things - and they were a better offensive rebounding team toward the end of last season - changes the equation a bit; having none of those things just leaves you with a bad team. And that certainly isn't ameliorated any by changing coaches mid-season, having a losing record at home, and barely making the playoffs.

"The crazy thing about this (season) is our locker room stayed together," Parker said after the game, according to Fischman's reporting.

And that's the problem with the Sparks: they have plenty of individual talent and even seem to get along well, but aren't a very good team as currently constructed.

We could continue detailing the many problems plaguing the Sparks in either their series with the Mercury or the season as a whole - or ever since drafting Ogwumike - but ultimately it would be beating a dead horse: the fact is that they have to finally make an honest self-assessment and decide to take a risk that might not be very popular among women's basketball fans.

What's next for the Sparks?

Changes are bound to happen for the Sparks this offseason. Parker seems to understand that and both general manager Penny Toler and owner Magic Johnson have said it explicitly. And as much as we harp on the statistical stuff and how well the pieces fit, they seem to more fundamentally need a culture change - the types of turnovers they made and the types of defensive lapses they have go beyond merely finding more complementary personnel.

In a series that everybody has been waiting for this season, the Phoenix Mercury and Minnesota Lynx will meet in the Western Conference Finals.

After a competitive Game 1 that came down to the wire, the L.A. Sparks never led in Game 2 as the Phoenix Mercury won in a rout to advance to their fifth Western Conference Finals in the last six years.

All of this begins with one question: will they trade Ogwumike or Parker?

We've been preaching the need for a trade for some time around here and that question is not at all an indictment of either player's individual responsibility for the team's failures but an observation that the two don't complement each other on the court well enough to expect championship results in a conference where the Mercury and defending champion Minnesota Lynx have established themselves as the dominant powers. No, they might not get "fair value" for either, but that's not the goal here: the goal is to create a more cohesive unit by getting complementary players that better support whichever star they intend to keep. One thing they desperately needed this season: a small forward who can both defend the position and shoot the three so they don't have to constantly put out lineups that sacrifice either spacing on offense or defense.

But what makes that question of who to trade even more interesting is the notion that while Toler might consider Ogwumike the leader of the team - something former coach Carol Ross might have observed as well - Johnson made it extremely clear that he intends to build around Parker. Debating which should stay really comes down to what they can get in return - they're both All-Stars and a team could succeed building around either, but the conversation of why to keep one over the other would be particularly interesting to hear.

Either way, Parker is "tired" of everyone celebrating this team's individual talent, according to Shelburne, and Sparks fans should probably be tired of waiting for things to magically come around for this team - they've got two great pieces to rebuild around and it's past time to commit to surrounding one of them with complementary talent instead of trying to force a pairing that has not worked and was never really going to.

The Sparks can't take any more half measures -- they need to go all the way with a complete overhaul, even if that means taking (further) steps backwards in the short-term or bringing in a new general manager just for a fresh perspective to break things down to the foundation and rebuild it. But it's impossible to defend keeping this current unit intact going into next season.

Tangentially related, Jewell Loyd and Breanna Stewart will be available in the 2016 draft for anyone who ends up misses the playoffs next season.

For more on L.A.'s brief 2014 playoff experience, check out our Mercury vs. Sparks storystream.