The Minnesota Lynx's sweep of the San Antonio Stars showcased the breadth of point guard Lindsay Whalen's skill as a scorer, passer, and leader.

Share All sharing options for: How the Minnesota Lynx beat the San Antonio Stars in the first round

Shooting 56% from the field helped, of course, but the Stars kept the Lynx to just two offensive rebounds with center Jayne Appel spending most of the quarter on the bench and committed just one turnover to mount a 15-point comeback before suffering an 88-84 loss in Minneapolis. Put that 31-23 advantage in the fourth quarter of Game 1 together with their dominant 28-12 advantage in the first quarter of Game 2 and the Stars outscored the Lynx by 24 points in consecutive quarters - despite the sweep and general perception that they didn't have a chance, the Stars made a statement that they're capable of playing with the league's best in this series, even if there's no credit given for disjointed quarters.

The defining feature of both of those "bright spot" quarters was certainly how well the team shot the ball: 56.5% in the fourth quarter of Game 1 and 61.1% in the first quarter of Game 2 is obviously outstanding.

And it should come as little surprise that Stars forward Danielle Adams was a major part of both of those big quarters for the Stars. In Game 1, Adams was quiet as a scorer but had 4 of her team-high 10 rebounds in that fourth quarter and finished the game with a team-high 2 blocks as well as 12 points. In Game 2, Adams was the one who came out hot scoring 9 of the team's 28 first quarter points and finishing with 23 points. Adams' ability to spread the floor alone is big on its own, but her rebounding against a team like the Lynx was especially important.

So why weren't the Stars able to play that well consistently? Turnovers are probably a large part of the story.

As much as the Stars' success has been predicated on outstanding 3-point shooting, the fact that they typically don't turn the ball over much has helped them a) maximize their own possessions and b) mitigate the damage of opponent's transition scoring opportunities. That's imperative against the Lynx where the margin of error is already small and, unfortunately, turnovers killed them in this series.

Prior to that efficient fourth quarter in Game 1, the Stars committed 14 turnovers that resulted in 14 Lynx points -- their six turnovers in the first quarter alone matched the amount they had all game in their regular season win against the Lynx on August 15.

In Game 2, the turnover battle was even, but that's just not good enough against a Lynx team with so many weapons: thy had to play a nearly flawless game to beat the Lynx and that included holding on to the ball to give them more opportunities to put points on the board. Unfortunately, they didn't get that done.

Going strictly by the numbers, Maya Moore is the clear MVP of this series. Moore followed up her 26-point, 7-assist, and 6-rebound game in Game 1 with 16 points, 10 assists, 8 rebounds and 4 blocks in Game 2 - the next time someone says Moore is nothing more than a scorer, this two-game performance might be Exhibit 1a to the contrary. And let's not forget what Seimone Augustus did in Game 2, dropping 21 points almost entirely off shots in the paint. 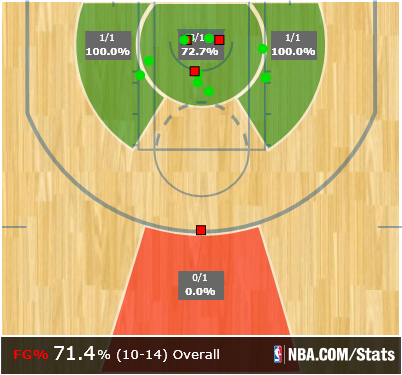 Seimone Augustus' shot chart in Game 2 of the first round against the San Antonio Stars.

Yet for all that Moore did, Lindsay Whalen's play in the series was so outstanding that it's hard to ignore. The final numbers - particularly the playoff career-high 31 points in Game 2 and the combined 18 assists to just 5 turnovers (all in Game 2) - are impressive, but her role in helping the Lynx counter the Stars' big quarters is probably more significant.

In Game 1, Whalen came up big with 4 of her 11 assists in the fourth quarter while contributing 6 points and no turnovers. In Game 2, Whalen helped her team respond to a flat first quarter by scoring 12 of her game-high 31 in the second quarter, including 6-for-6 free throw shooting. Similarly, in the fourth quarter of Game 2, Whalen led the team with 9 points to put the Stars - and the series - away.

She also did this:

Whalen's contributions aren't always easily to quantify as a point guard, especially compared to the contributions of 2014 WNBA MVP Maya Moore. But this series might best demonstrate her value: in a game that Cheryl Reeve described as "vintage Minnesota Lynx basketball" according to Kent Youngblood of the Star Tribune, Whalen was the catalyst that woke the team out of a first quarter slumber that might have demoralized lesser teams. In Game 1, the very audacity of that alley oop pass to Maya Moore demonstrates a different kind of leadership: an astounding confidence not only in her own ability to make plays but also incredible (and quite well-deserved) faith in her teammates to complete them. More subtly, while the Stars were struggling with turnovers a bit Whalen led an efficient Lynx offense to just 8 turnovers.

You can't quite quantify that team cohesion that has made the Lynx so great over the last four years or that "whole greater than the sum of its parts thing" that also helped the Stars to a third seed this year, but that stoic calm that Whalen plays with allows everyone else to excel whether she's just flipping passes around or bulldozing her way to the basket.

For more on this series - including all the angles of that ridiculous play from Whalen to Moore - check out our Lynx vs. Stars storystream.