Turnovers have been a problem for the Washington Mystics all season. Against an Indiana Fever team that likes to force turnovers, the Mystics found themselves in a bind.

Share All sharing options for: Fever vs. Mystics series review: Indiana capitalizes on Washington turnovers to advance in 2014 WNBA Playoffs

Normally, you'd expect a team to have a very good chance at winning when they out-shoot their opponents, as the Washington Mystics did in their first round playoff series against the Indiana Fever.

The Mystics didn't exactly have a great shooting series, but managed to outshoot the Fever by a margin of 42%-39%. In Game 1, that was undermined primarily by a combination of Fever rebounding and free throw attempts. 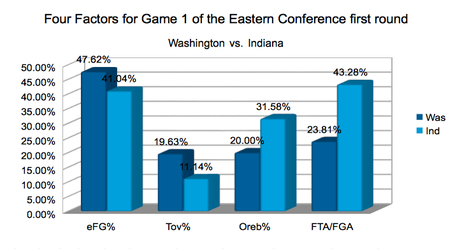 As already discussed about Game 2, the Mystics cleaned up a lot of those more significant problems from Game 1, but got burned by poor shooting late in the game. And yet, in both cases, you could argue that the Mystics' turnovers were the biggest problem.

How the turnovers hurt the Mystics

Amazingly, despite the disparity in turnover rates, the Mystics had more points off turnovers than the Fever (32-29) but that's not entirely the point.

The problem for the Mystics is that their turnovers really reduce their margin of error otherwise to nothing: for example, although they shot more efficiently than the Fever in Game 2, when their shooting touch disappeared and their stars struggled to create shots the turnovers further wasting possessions with five turnovers in 15 just exacerbated their problems. Meanwhile, the Fever were able to lean on Tamika Catchings to create offense.

Similarly, those squandered possessions make it very difficult for the Mystics to hold leads: in Game 1, they went into halftime with a 36-30 lead. They could've extended that lead in the third quarter with Indiana shooting just 36.8% from the field to get a crucial road win in the series. However, they turned the ball over seven times for eight Fever points in the third quarter to help keep the game close and head into the fourth quarter (on the road) up just 50-47.

And that's what it has been all season for the Mystics: even when the numbers aren't bad, the timing of these turnovers can really hurt a team that really lacks the type of star power that Indiana had to just take over games. The Mystics just aren't a team that can afford mistakes like that if they expect to win games in a playoff atmosphere.

With the Fever doing everything in their power to take away Ivory Latta with a combination of trapping defenses and outstanding on-ball defense by Briann January while Emma Meesseman was just completely overmatched by Tamika Catchings, the Mystics needed someone else to step up to score.

Fittingly, it was veteran Kara Lawson who did so.

Lawson didn't have quite the scoring performance (or devastating ball-handling highlight) that Ivory Latta did in Game 1, but she really showed up in Game 2 when they needed a boost. With Latta and Meesseman combining to shoot 1-for-10 in the fourth quarter and overtime - not to mention the surprisingly productive Tianna Hawkins fouling out within the first 15 seconds of the fourth quarter - Lawson did her best to pick up the slack by hitting a pair of her game-high four threes in overtime to keep the game from getting away from the Mystics.

Unfortunately, it wasn't enough as the Mystics got swept and Lawson had some untimely turnovers as well, but had they pulled it out in overtime her team-high 20 point performance would've been a primary reason for it.

The only reason Catchings was considered an "x-factor" entering this series is because the regular season series was 2-2 and the Fever lost the only game she played. She figured to play a larger role in the postseason and she did exactly that.

The major challenge for the Mystics was always going to be what to do about the problem of guarding Catchings and Catchings guarding Meesseman - Catchings ended up winning the matchup on both ends by a large margin.