Despite shooting better than the Indiana Fever for most of the series, the Washington Mystics went cold during the final 15 minutes of their season-ending loss in Game 2.

Shooting efficiency has been a challenge for both the Indiana Fever and Washington Mystics this season and it ultimately shaped the outcome of their first round series in the 2014 WNBA Playoffs.

The Fever outshot the Mystics 52.6% to 30.8% during the fourth quarter and overtime of Game 2 to earn an 81-76 win and advance to the Eastern Conference Finals. What has to be particularly frustrating about that for the Mystics is that they actually did shoot better than the Fever for three quarters.

Shooting percentages for the Washington Mystics and Indiana Fever in Game 2.

But two things conspired against the Mystics at the end of the game: first, Ivory Latta couldn't make a bucket in the final 15 minutes of the game, shooting just 1-for-7 and air balling a floater long from the right block when the Mystics were down three with 42.9 seconds left. Second, the Fever had Tamika Catchings. 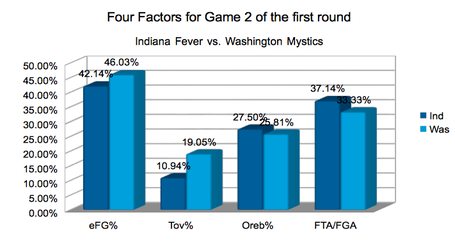 Frustrating thing for the Mystics: they actually shot better than the Fever for the game, but were undone by a late cold spell.

Defensively, Catchings just took young Mystics forward Emma Meesseman completely out of the game, holding her to 0-for-3 shooting and just two points off of free throws over the last 15 minutes. Offensively, Catchings just completely overwhelmed Meesseman late in the fourth quarter and OT to score 13 points of her game-high 26 points on 3-for-3 shooting from the field 6-for-6 free throw shooting. In the process, Catchings also became the league's all-time leading playoff scorer.

And if you want to summarize the gap between these two teams, those final 15 minutes pretty much put it on full display: although the Mystics did well for most of the game, their opponent just had a star who could completely take over the game when it came down to clutch time. Washington veteran Kara Lawson made a valiant effort to carry the team down the stretch, hitting a pair of threes for 6 of her game-high 20 points. But Catchings' starpower was ultimately the difference in this season with her ability to impose her will on both ends.

An embed of Mike Thibault's, Kara Lawson's, and Tianna Hawkins' press conference is above. If you can't see the video, click here.

For more on this series, check out our Fever vs. Mystics storystream.