The L.A. Sparks squandered a fourth quarter lead to the Phoenix Mercury in predictable fashion to open their first round series in the 2014 WNBA Playoffs.

Share All sharing options for: Mercury vs. Sparks, Game 1 final score: Phoenix makes plays down the stretch to beat L.A., 75-72

Predicting that the Phoenix Mercury would sweep the L.A. Sparks in the first round of the 2014 WNBA Playoffs actually had little to do with a significant "talent" differential - team composition, maybe, but the Sparks are hardly lacking talent.

This matchup has always been about intangibles - for the entirety of the regular season and during last year's meeting in the first round. And it's ultimately what tonight's 75-72 loss to the Mercury came down to, just as predicted by Sparks coach Penny Toler in a preview of tonight's game by L.A. Times reporter Samantha Zuba:

Beneath the game plan, however, lies one essential element if the Sparks want to dish out heartbreak rather than feel it.

"This will be a game of wills," Toler said. "Just like last year, when they beat us by one point, the difference has always been a bucket here or a bucket there, and I look for this series to be the same."

As evidence of that point: The Sparks managed to outshoot, outrebound, and control the ball better than the Mercury and yet still managed to lose this game.

That played out in two ways for the Sparks: first, they opened the game shooting 6-for-23 in the first quarter. Kris Habbas of SB Nation's Bright Side of the Sun unofficially recorded the Sparks shooting 1-for-9 from on mid-range shots. By the end of the quarter, that only improved to 3-for-12 with no free throw attempts. 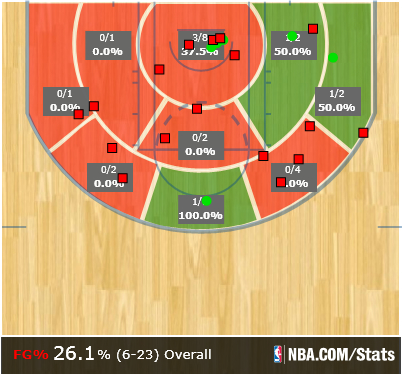 L.A. Sparks shot chart in the first quarter of their Game 1 loss to the Phoenix Mercury.

Although Mercury center Brittney Griner certainly had some influence on that, the Sparks proved throughout the rest of the game that it didn't have to be like that: they were more than capable of getting shots in the paint when they moved the ball and getting free throw attempts when they attacked the rim. But after establishing an early 10-2 lead, the Sparks' own shot selection contributed to the Mercury being able to catch up.

Those shooting tendencies also explain the disparity in free throw attempts better than any officiating bias might: while the Mercury had 22 free throw attempts in the game, the Sparks had just 8 as they continued to take off-balance or contested mid-range shots.

Second, the Sparks fell apart down the stretch. It wasn't just the late scoring drought that Minnesota Lynx play-by-play man Alan Horton pointed out on Twitter. In the final three minutes, the Sparks had three turnovers and gave up three offensive rebounds to the Mercury. The Mercury didn't exactly shoot any better - they were just 1-for-7 in the final three minutes - but the Sparks gave up 8 free throw attempts to allow them to manufacture points.

Yet the Mercury also had Diana Taurasi scoring 9 of her game-high 34 points in the fourth quarter; down a point with 40 seconds left, Taurasi hit a pair of free throws to regain the lead. On a night when the Mercury shot just 40.7% as a team, Taurasi shot 6-for-9 from the 3-point line. The Mercury turned the ball over just once in the final 10 minutes.

In contrast, Candace Parker had a game-high tying 7 rebounds but scored 9 of her team-high 22 points in the fourth quarter as well but had two turnovers and missed a one-handed runner on the possession following Taurasi's free throws. Kristi Toliver tied Parker with a team-high 4 assists, but had just 2 of her 13 points in the fourth quarter when the Sparks could've used a scoring jolt.

If the Sparks were going to beat the Mercury in this series, this game was the perfect opportunity: the Mercury had a terrible shooting night in Phoenix and the Sparks beat them in almost every facet of the game. Unfortunately, the issues of late-game collapses and poor shot selection that have plagued the Sparks all season undermined them again - they're neither specific to tonight's game or this specific matchup. For whatever reason, reasons that are apparently unclear to even the Sparks themselves, the Sparks just lack those intangibles that championship contenders possess, whether you label it as an "IT factor" or "mental toughness".

We could say that they need to dig deep to figure these issues out now, but we've been saying that at least this entire season and really for the better part of the past two seasons - this is a roster of considerable individual talent that has yet to become a great team.