The defending champion Minnesota Lynx begin their journey for a third title in four years in the first round of the 2014 WNBA Playoffs today with a chance to cement themselves as one of the league's great dynasties. But how does this year's team compare to that of past years?

One of the weirdest things about the Minnesota Lynx's run of dominance over the last three seasons is that they've seemingly been overshadowed by other teams the entire time.

At the beginning of the 2011 season, all eyes were on a Seattle Storm team that had dominated the entire league en route to a title in 2010. In 2012, the Lynx were the favorite to defend their title but that year's dominance might be obscured in history by their (surprising) loss to the Indiana Fever in the Finals. Last year, nearly everyone had astronomical expectations for the Phoenix Mercury; this year the Mercury fulfilled that potential and dominated the season's narrative en route to a record number of wins.

All of that is generally understandable and yet rather weird for a team this good - they've been extremely good and yet have had to share the spotlight with others throughout their run in a way that budding dynasties normally don't have to in pro sports.

The Lynx have a reasonable chance to win their third title in four years. They're the first team to reach 25 wins (a win percentage of .735) in four consecutive seasons. Maya Moore hasn't won a MVP award yet, but has won five of the last six Player of the Month honors - even if she doesn't get the award again this season, it's difficult to argue that anyone has been more valuable to their team over the last two year span. Lindsay Whalen has similarly been the league's most efficient distributor for the last two seasons.

And not yet discussed, the Lynx have been a historically efficient ball handling team over the last two years.

With Maya Moore being so dominant this season, it probably sounds silly to given anyone else on the roster any type of MVP consideration but consider this: over the past three years, the Lynx have recorded the top three assist seasons in WNBA history. On top of that, over the past two seasons, they've recorded the best two turnover seasons.

Obviously, some of that has to be attributed to the play of Lindsay Whalen, the elite distributor who runs the team's offense. Yet I'd be remiss if I didn't mention Janel McCarville's contribution to that: McCarville has been about as efficient a distributor as you could ever hope or want a center to be over the last two years (PPR; 2013, 2.76; 2014, 1.30). And that combination of having an elite passer at both point guard and center (in the high post) is probably the easiest explanation for this level of efficiency over the past couple of seasons.

Regardless of how you explain it, the fact of these past two teams have been historically good in both assists and turnovers begs the question of which team is better. And when you look at those margins, it should be pretty obvious that those numbers alone aren't going to resolve much: they're basically the same.

Likewise, when you look at the shooting efficiency from this season and last, you get essentially identical numbers: 49.54% this season, 50.17% last season. That's an amazing combination of efficient ball movement and efficient shooting. When you add that the shooters they're moving the ball to happen to be Moore and Seimone Augustus it's an absolutely lethal offense. They do take a lot of mid-range jumpers, but when one of those mid-range shooters is Augustus - one of the best mid-range shooters pro basketball has ever seen - that actually sort of makes sense. With Augustus out for portions of this season that shot distribution changed a bit, but they're still a well above average mid-range shooting team, which makes them difficult to defend particularly when their threes are falling.

On top of that, their transition game is strong going both ways, though not quite as strong as last season: they rank third in fast break points per game (11) and second in points off turnovers allowed (13.41), a by-product of their historically good ball control. The Lynx just aren't a team that's going to make a lot of mistakes and, at this level of overall offensive efficiency, that just makes them extremely difficult to stop.

I made the point previously, but it bears repeating with the final numbers: their offensive rating of 106.7 is tied for 12th best in league history with the 2001 L.A. Sparks, according to Basketball-Reference's numbers. Yes, they're second to the Phoenix Mercury this season, but they're still a historically good team that is putting up numbers well within the range of title contention. 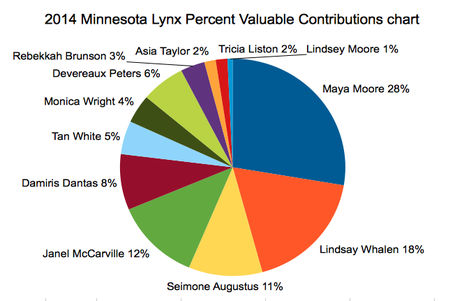 As talented as the defending champion Minnesota Lynx are, Maya Moore was clearly the team's best player in 2014.

And of course the fact that this stunningly efficient offense is led by 2014 scoring champion Maya Moore, whose PER of 29.38 is 16th all-time.

We've already been through the argument for Moore as MVP a number of times now, but just to put her value to the team in perspective she was responsible for more than a quarter of her team's overall statistical production (league-high 27.53%), which helps dispel any notion that she shouldn't get the MVP award due to playing with such talented teammates: with rotation regulars Augustus, Rebekkah Brunson, and Monica Wright missing a combined 44 games - at times overlapping - Moore was legitimately carrying this team to its fourth consecutive 25-win season for a good portion of it. That and the fact that she was really just amazingly dominant as an efficient pure scorer make her MVP argument considerably stronger than it was last season when the issue of talented teammates might have been a bit more relevant.

Despite all of that, the Lynx weren't perfect this season: their defense this season was the least efficient of this four-year run in part due to allowing the highest 2-point percentage of the last four years and a significantly higher 3-point percentage. And the explanation for that might actually go right back to injuries.

The Lynx are still an above average defense within five feet (55.6%) and paint defense (31.71 points per game allowed, 2nd), but the problems for them emerged in the mid-range. After holding opponents to a league-low 31.6% from 16-21 feet last season, they let opponents shoot 37.9% from the same range this season on just seven less attempts. Again, although the analytics movement has demonized those long twos - those aren't especially efficient numbers, whether league-best or just average - that accounts for a big chunk of the team's defensive struggles. And who might be guarding shots in that area? It's probably reasonable to assume a lot of those shots were taken by guards - Augustus and Wright missing nearly a third of the team's games apiece might have made a difference defensively, both in terms of those mid-range numbers and opponents shooting better from 3-point range (34.6%).

The absence of Wright in particular might have exacerbated another problem: the Lynx averaged the least bench points in the league this season (14.76) after finishing eighth last season. The drop-off of about 2 points closely mirrors Wright's approximately 3 point decline. They have just relied more heavily on Augustus, Moore and Whalen this season with all the injuries - perhaps one could suggest that foul trouble or some excellent defense on Moore could undermine the Lynx's chances.

The big caveat for Minnesota throughout this whole season has been the absence of Brunson, easily one of the league's greatest rebounders ever. Although it should be noted that they maintained a league-best defensive rebounding percentage, you can't just replace that offensive rebounding ability that Brunson brings. And that costs second chance scoring opportunities and, by extension, scoring efficiency.

So the big thing we can't really say yet is just how good this year's Lynx can be at full strength - they went 8-3 with Brunson in the lineup, but it's impossible to argue that they've hit a peak with their full roster intact. We could probably speculate as to whether they'll be able to find more of a rhythm as they've lost three of their last four regular season games, but there might be a more interesting approach.

In the second half of the season - since the league's true midpoint - when they've had Augustus, Brunson and Wright healthy for the majority of the time, the Lynx have been the third in defensive rating (98.5%) and fourth in opponents effective field goal percentage (44.60%). That at least rivals the elite defensive numbers they've put up in past years. Their offensive rebounding numbers have remained relatively stable, perhaps in part to Brunson having one of the least productive offensive rebounding years in her career since her return and reserve Devereaux Peters dropping from 10.1% last season to 7.9% this season after missing five games herself early on.

As for that problem defending the 3-point line, they've held opponents to an anemic 30.07% over the last 16 games - better than their mark in 2013.

How does this year's Lynx team compare to those of the past?

In other words, this year's Lynx team is still extremely impressive at full strength and that's with a few key players having sub-par seasons. That they've managed to have one of the best assist-to-turnover seasons in league history at less than full strength is remarkable.

So how does this year's team compare to those past teams at full capacity rather than just comparing the seasons as they were?

Although you could say this year's team isn't as good offensively as last year's and they haven't shot quite as well as they did in 2012, Moore has been so dominant as a scorer and McCarville so good as a high post distributor that it's hard to just dismiss what they're capable of offensively this season even if their offensive rebounding hasn't been at normal levels. One factor that might be worth considering: Candice Wiggins was awfully good as a reserve ball handling option in 2011, but both their 2013 and 2014 teams were slightly less turnover prone.

Defensively, this year's team has already made strides in the second half of the season as players have returned to the lineup. While this year's team has caught up a bit in terms of opponent scoring efficiency, one thing that made their 2011 and 2013 defenses so good was that they also forced more turnovers: the marks of 17.24% and 16.05%, respectively, far exceed this year's rate. But again, the explanation isn't particularly difficult: Augustus, Brunson, and Wright - in addition to Wiggins in 2011 - have all been contributors to generating turnovers in the form of steals in the past (though even in the second half of this season, they just haven't been terribly adept at forcing turnovers).

You could argue that this year's team is a bit behind last year's or 2011's based on the numbers, but you have to consider that in light of the fact that they haven't had the same time to gel this season. And winning a title might not even be a great standard to use in this argument: the Mercury are so good on both ends of the floor that it's conceivable that the Lynx could be as good as they've ever been and still cede the title.

If the Lynx do win it all again this season, they'll cement their status as one of the league's great dynasties and the 2014 team will have to be under consideration as the pinnacle of the franchise's dominance if only for overcoming a team as good and balanced as the Mercury if nothing else. Yet, unfortunately, if the Lynx fall short of the ultimate goal there's a chance that the full extent of their greatness over the past four seasons will be further obscured as another team takes the spotlight once again.