The San Antonio Stars enter the 2014 WNBA Playoffs as the third seed in the Western Conference on the strength of a balanced and beautiful brand of basketball.

Share All sharing options for: 2014 WNBA Playoff preview: San Antonio Stars live by the three to take the third seed

The obvious feel-good story of the 2014 WNBA Playoffs is that Becky Hammon will be making her final post-season appearance before retiring and joining the coaching staff of the NBA's San Antonio Spurs.

But in a strictly basketball sense, the fact of the San Antonio Stars being in the postseason is a great story on its own.

It's not exactly a stunner that the San Antonio Stars ended up in the playoffs - prior to the season, there were legitimate reasons to think that the Stars, Seattle Storm or Tulsa Shock could claim the fourth playoff spot in the Western Conference. But it would probably be disingenuous for anyone to say that they expected the Stars to leapfrog the L.A. Sparks to finish third in the talented Western Conference. The Sparks' problems this season have been well-documented, but that doesn't negate that finishing third in today's Western Conference is a bit of an accomplishment for the Stars.

Although you'd be justified in being tired of the comparisons to the Spurs - that are now certain to go on for eternity with Hammon on the staff - the Stars really did win with the sort of balanced team effort that defined the 2014 NBA champions.

I mentioned in my point guard rankings the other day that Danielle Robinson is clearly the Stars' MVP and though I stand by that as a matter of statistics and observation, the Stars are balanced to the point of making it a moot point. 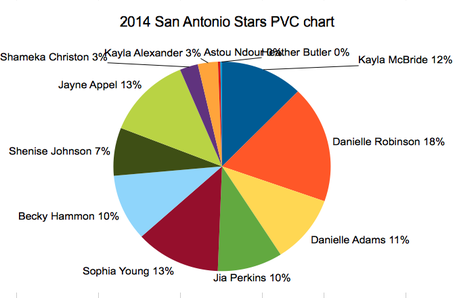 The San Antonio Stars have shown remarkable balance this season: seven of their players contributed between 10-20% of their overall statistical output. (Click on the title above to enlarge the chart).

Robinson was an All-Star, yes - and the engine that is probably capable of pushing the surrounding machinery faster than it's equipped to go - but the roster is filled with talent that probably doesn't get its full due because they fill their roles in above average fashion but aren't quite the cream of the league's crop.

Jia Perkins would almost certainly be the front-runner for Sixth Woman of the Year had she not missed 11 games, but still is second-best in the league in both steal percentage (3.2%) and turnover percentage (7.8%). That super-low turnover rate is even more impressive considering that she owns the league's 10th-highest usage rate (25.6%), meaning she's heavily involved in the team's offense when she's on the floor but just does an exceptional job of taking care of the ball. To cap it off, she's third in the league in 3-point percentage (41%), making her one of the most efficient offensive threats in the league.

Adding to claims about their depth, Danielle Adams leads the team in usage percentage at 27.8% despite coming off the bench for 20 games this season. Although 2014 has been her least productive season as a pro, she still presents problems for defenses with her ability to shoot the three (30.7%) and score or rebound in the paint. She's shooting just 25.6% from beyond the arc over the last 10 games, but she can present major matchup problems and creates outstanding court spacing.

Then you still have the mainstays from the Stars' 2008 Western Conference champion team in Hammon and Sophia Young-Malcolm, both of whom have accepted roles as supporting cast members. Although Young-Malcolm was the dominant MVP-caliber player she has been in past years, this is actually her best offensive rebounding season (8.8%) since her rookie year and her most efficient ball-handling season with a turnover percentage of 8.3%, according to Basketball-Reference - while she isn't helping the team as much as she used to, she's definitely not hurting.

The always excellent Becky Hammon has been one of the most efficient ball handlers in the league this season and has shot 39.8% from beyond the arc - as I've said previously, although she isn't playing much point guard this season there aren't a lot of players you'd rather have at the position right now when considering the full package of efficiency, experience, and leadership.

Where does McBride stand among 2014 rookies?

Although Kayla McBride probably won't receive too many votes for 2014 WNBA Rookie of the Year, she has easily been among the top five in her class.

Putting Becky Hammon's career in perspective Where does McBride stand among 2014 rookies?

And with all that, rookie Kayla McBride only adds to the team's scoring arsenal as leading scorer (13 points per game) and the sixth-best 3-point shooter in the league (39.6%) while also finishing with the fourth-lowest turnover percentage in the league. Similar to a number of her teammates, she's a very good rookie but simply overshadowed by the transcendent play of Sims and more traditional dominance of Chiney Ogwumike.

And McBride's play actually epitomizes the strength of this team: she's not a perfect offensive weapon (yet), but her ability to maximize possessions with 3-point shooting without squandering possessions in the form of turnovers makes things extremely difficult on opposing defenses. That, in a nutshell, is what makes the Stars a dangerous team.

They can trot out lineups with 3-4 3-point shooters to spread the floor on offense while players like Adams, Young and Jayne Appel can all serve as efficient post passers - Appel is one of the league's best distributors in the post, finally fulfilling one of her biggest assets as a draft prospect. And just about everyone who plays significant minutes is a low-turnover player, which makes them especially efficient at moving the ball. To put their league-low turnover rate (13.14%) in perspective, they've committed the fifth-fewest turnovers per game in WNBA history.

As Hammon has said about her transition to the Spurs, they run a number of the same sets as their NBA counterparts and they have the personnel to truly embrace the "whole bigger than the sum of its parts" thing that everyone aims for in basketball. As is the case with many of their individual players though, their offensive prowess doesn't necessarily get its just due: it's both the fourth-highest rated offense in the league and yet "only" the fourth-best in the Western Conference leaving them simply outclassed by other teams.

And their defense doesn't necessarily help much.

The undoing of the Stars, particularly against a team as good as the Minnesota Lynx, will likely be their defense: they're the second-lowest rated defense in the league this year and the worst defense in the 2014 playoffs (106.1 defensive rating). And their characteristic lack of rebounding - a by-product of having so many finesse players - isn't even the worst of their problems.

The somewhat stunning thing when you look at the weighted differentials above is that you can list shooting efficiency as a weakness for a team that shoots as well as the Stars, but two things really work against them: interior defense and transition defense.

They aren't a great rebounding team overall - as their differential shows - but they actually allow the third-least offensive rebounds in the league in part because they have solid defensive rebounders at every position. But what really hurts them is that they allow the highest 2-point percentage in the league (51.3%) and the third-most points in the paint (36.94%). What makes that particularly noteworthy is that they allow a below-average free throw rate - they're not a team just allowing free runs to the basket and fouling. That leaves one explanation: they're really poor at defending the mid-range. As it turns out, that's exactly what a closer look at the numbers support.

The Stars don't give up an abnormally high number of mid-range shots, but they do allow the highest shooting percentages from both 6-10 feet (40.3%) and 16-21 feet (43.2%). That obviously cuts two ways: as analytics have swept through the NBA, more teams are content with denying scoring opportunities at the rim and behind the 3-point line at the expense of "giving" opponents far less efficient mid-range shots; that's why, against the grain of conventional wisdom, mid-range shots are the most efficient shots in basketball late in the shot clock.

Getting a team to settle for jumpers can sometimes be a path to victory - teams that live in the mid-range are automatically making themselves less efficient unless they get hot. But the fact that the Stars are so far above average in both of the aforementioned mid-range categories is a problem, especially when facing a team that features Seimone Augustus who has made a career of torching people from mid-range and is easily among pro basketball's best ever from that range.

That problem is compounded by another seemingly paradoxical problem: despite turning the ball over at the lowest rate in the league, the Stars give up the third-most fast break points. The problem? That likely falls on a combination of taking a league-high 630 threes, which leads to long rebounds that can trigger fast breaks for opponents if they leak out.

The Stars' weaknesses probably immediately leads to a rather trite conclusion: the Stars need to make threes to win. And to that point, I offer this little factoid: the trio that accounts for 61% of their 3-point attempts are shooting way better from long-range in wins than in losses.

As it turns out, this is one of those situations where the numbers are telling half-truths.

You'll notice that this group is just shooting more threes in those losses, meaning that part of their problem is relying too heavily on threes moreso than making too few. Drilling a bit deeper into the issue, we see that Adams and Hammon are actually shooting threes at the same rate in wins and losses - the difference is they're just playing more minutes in losses and thus have more opportunities to shoot. The real culprit is McBride, who plays almost identical minutes in wins and losses and yet has shot 28 more threes in the team's 18 losses than she did in their 16 wins.

McBride shoots 32% of her shots from beyond the arc in wins and 43% from three in losses. And as a result, that means she's going to the free throw line less in those losses than she is in the wins - in other words, she's more of a pure jump shooter in the Stars' losses. That alone obviously contributes to that decreased efficiency, but also somewhat reflects the fact that when she goes cold she can go ice cold and have 1-for-6 or 3-for-9 games.

Of course, the whole thing is just a by-product of a team that shot a league-high 27.5% of their shots from three: you're gonna overwhelm opponents at times, but find yourself digging a hole for yourself at others. But McBride in particular

Despite their weaknesses, the Stars' approach - loading up on 3-point shooting, moving the ball exceptionally well, and living with opponents' mid-range shooting - is one that maximized the personnel their roster has. And Dan Hughes deserves ample credit for that.

Former Stars assistant and head coach Sandy Brondello has to be the favorite for the 2014 Coach of the Year award for leading the Phoenix Mercury to a record number of wins and the job Mike Thibault has done leading a young team to its second consecutive playoff berth is extremely (if not more) impressive. But Hughes deserves ample credit for the Stars' success this season. Play as balanced and efficient as the Stars is the result of player buy-in. The presence of so many veterans and a core that has been together for a while also obviously helps, but a coach who keeps a team that focused in doing it consistently deserves credit for it too.