The Washington Mystics have made their second straight WNBA playoff appearance. Let's see what they need in order to advance to the Eastern Conference Finals for the first time since 2002.

General Manager and Head Coach Mike Thibault has led the Washington Mystics to the postseason in each of his first two years at the helm. Considering that the Mystics have only made consecutive playoff berths once in franchise history (2009 and 2010 under then-GM Angela Taylor and Coach Julie Plank), this is a sign of progress. A sign that the Mystics are now playing consistently and figure to be a team that is in the picture year in and year out.

In their first round playoff series, the Mystics will play the Indiana Fever, which has made three straight conference finals appearances in a row, and won the WNBA Finals in 2012. Game 1 will be on Thursday, August 21 at Bankers Life Fieldhouse, and Game 2 will be at Verizon Center. Game 3's back in Indy on Monday, August 25, if need be.

Given that they are playing a playoff-tested team, the Mystics will be underdogs. This is not unlike how they have been for all of the last two seasons.

And on top of that, the Mystics have never made the Eastern Conference Finals since 2002. They are the only WNBA team that has been in business for 10 or more years without getting to the Finals. Could this be the year when they sneak out of an otherwise even Eastern Conference playoff field? Let's see.

Let's just take a look at the 2014 regular season Four Factors of all 12 WNBA teams, sorted by Defensive eFG%, from best to worst. You'll also see pace and team offensive and defensive ratings from Basketball-Reference.com:

Now, let's just look at the Four Factors for the Mystics and Fever in their four regular season games:

These will serve as the basis of the rest of preview. 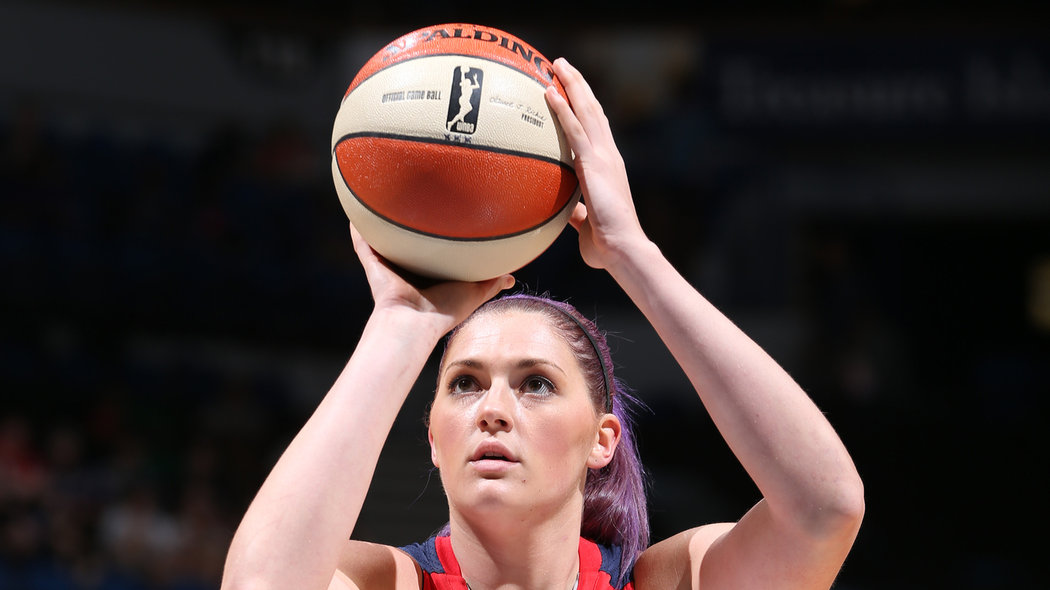 Mike Thibault - At least on Swish Appeal, (if not around all of women's basketball), Thibault is known as the best coach in the WNBA. He makes the most out of the hand he is dealt and lets the chips fall where they may. Seeing that he has been able to keep this team playing at a near .500 level despite having a very young roster and without a clear franchise player is nothing short of outstanding.

Team defense - The Mystics are second in the league in eFG% defense, and are also third in team defensive rating. In addition, every post player in the rotation has an individual defensive rating below 100.

During the Mystics' four games against the Fever, Indy had an eFG% of 40% or below in three of those four games. This includes the August 8 game with Tamika Catchings.

Free Throw Shooting - The Mystics shot 79.8% from the charity stripe in the regular season. Furthermore, they have increased their FT rate over the second half of the season, which was something they needed to do, considering that they were last in the league in free throw attempts for much of the first half. They ended up in 9th place for total attempts, which shows that they are taking advantage in that area.

Three point threats - Yes, Mike Thibault has complained about the lack of efficiency here for the first half of the season, since they were among the league's worst in three point shooting PERCENTAGE. There's a slight flaw with that, because the team also made more threes than most other teams. They have a number of strong shooters like Ivory Latta, and Kara Lawson. Then Bria Hartley has also held her own from here, as she shot 32.7% (33-101) from deep. Monique Currie improved from there as the year went on as well.

All five starters average at least nine points a game - The Mystics' starting five of Ivory Latta, Bria Hartley, Monique Currie, Emma Meesseman, and Kia Vaughn average 9 points or more a game. That pretty much tells the Fever defense to play everyone honestly. 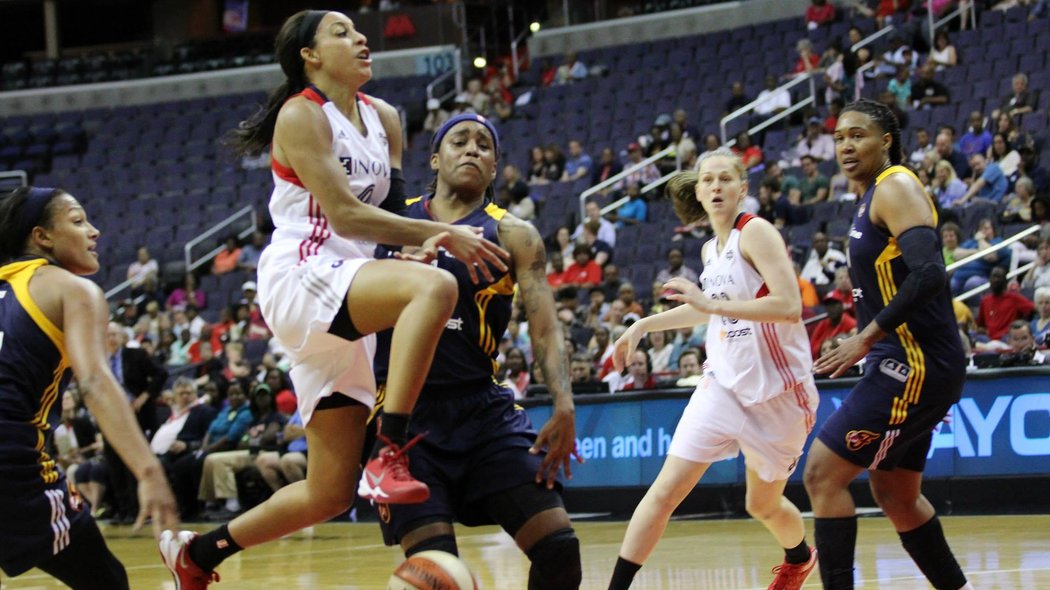 Photo by Stewart W. Small - notice that the ball's not in Hartley's hands here.

Turnover differential - The Mystics had the third highest TOV% rate on offense, and the lowest TOV% rate on defense. And this is actually kind of a paradox. From numbers alone, this tells me is that the team's defensive focus is likely based on preventing the opposition from taking an easy shot, as opposed to disrupting passing lanes for potential fast break opportunities.

This is an interesting thing though. In three of their four games against Indiana, the Mystics had an offensive TOV% below their season average, including their last game on August 8 with Catchings.

Pace - The Mystics' roster has been built to a point where they should be able to consistently play at a fast pace, but for whatever reason, they tend to play slower than they should, and Thibault has noted this in a number of post game press conferences. Since Thibault's offense is built to be uptempo and to be a free-flowing game, it's imperative that the players play that way. During the 2014 season, the Mystics were the third slowest team, and that's not something that pleases the coach.

The Fever and the lottery-bound Storm are the only two teams that play at a slower rate. They also happen to be teams that are quite good at keeping the speed of the game down as well. If the Mystics want to win this series, speeding the tempo up is something that should work in their favor.

It should also be noted that the July 2 game against the Fever was the same game where Thibault complained in a post-game press conference that he was not happy with the team's pace. After that point, the Mystics won six of their next eight games. 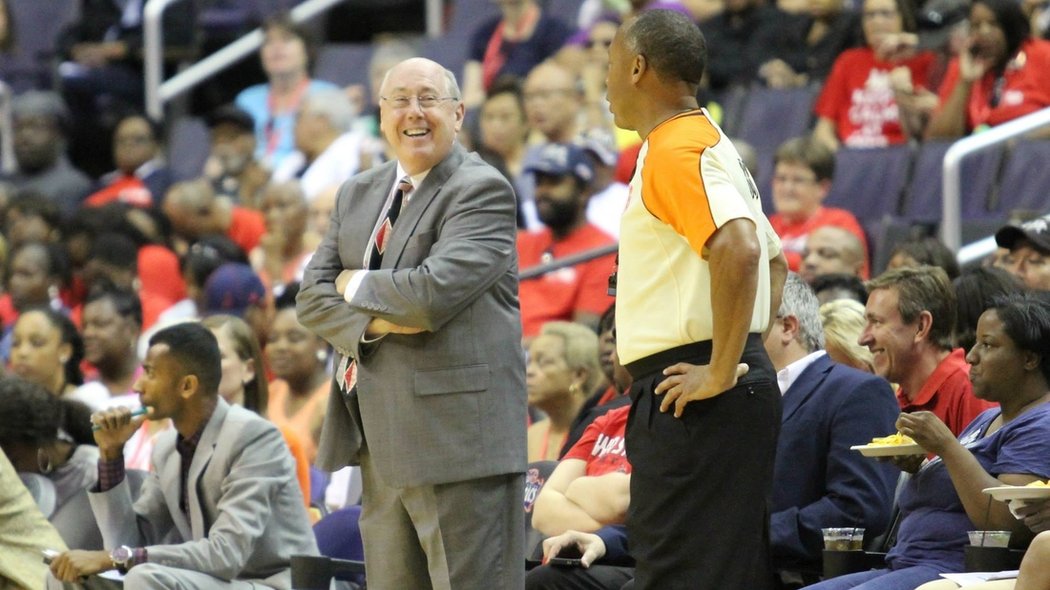 On most, if not every other team in the league, you can say that there is a player who really is contributing to wins more than everyone else. But this team is probably an exception.

Mike Thibault is the Mystics' "franchise player" considering that there doesn't appear to be a runaway standout player at the present time. Yet, he is developing this team to play good basketball together. All despite the fact that the roster is almost entirely made up of mid-first round draft picks and below.

I get that he is in a suit and not a jersey, but without Thibault, this team is going to be on the outside looking in. And considering that most coaches do not want to play the young players on the roster as much as he does, that earns him even more points. 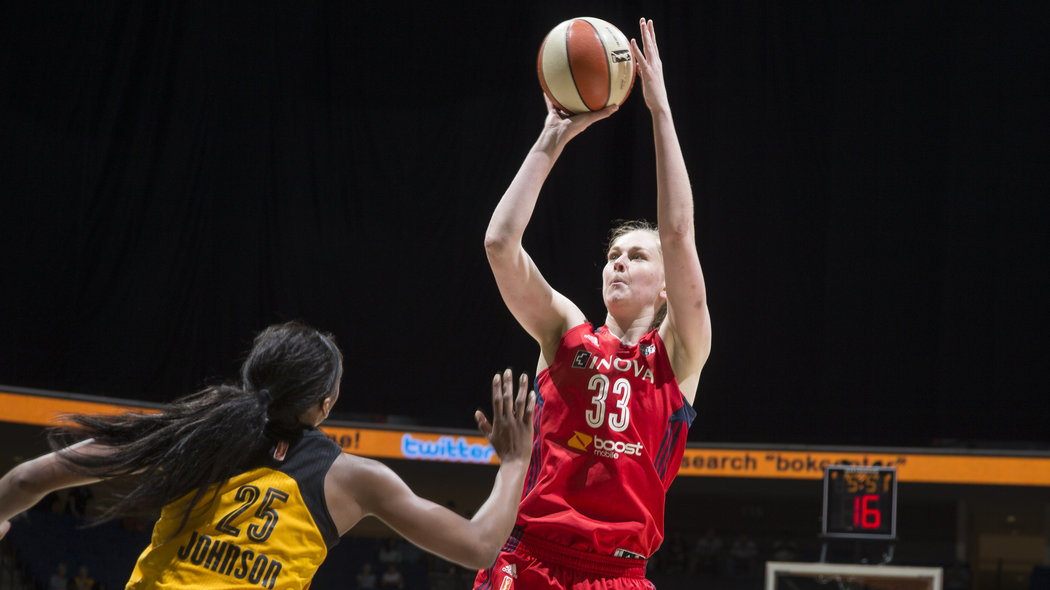 Ivory Latta may be the Mystics' All-Star, but that was with help from Laurel Richie. Even then, Latta is not their best player, despite her well-known three point shooting ability. It's 21-year old sophomore forward Emma Meesseman.

And like Andy Livingston wrote recently, Meesseman needs to be involved more on offense than she is, which isn't enough. Her usage rating is 18.6%, which is fifth lowest on the team.

What do you expect the Mystics to bring to the 2014 WNBA Playoffs? Share your thoughts below.