Pathetic performance by the Mystics. Especially the first half.

It's Fan Appreciation Night in Verizon Center, and the regular season finale. The Washington Mystics (16-18) were happy to be in the playoffs, and had a chance to clinch at least the #3 seed in the East. Instead, they played lethargically, and lost to the New York Liberty (14-19), 73-61, in a game that really felt worse than that.

In a press conference (embed above or click here), Mystics head coach Mike Thibault mentioned that they arrived back in Washington past 4 a.m. ET after their playoff clinching win against the Connecticut Sun. So fatigue played a factor. Then, the win was emotional, because the team squandered its two previous chances to clinch the playoffs.

Sure, these are legitimate reasons as to why a team may not be able to play at an optimal level. But when a team shoots like this all game, and misses easy bunnies at the rim: 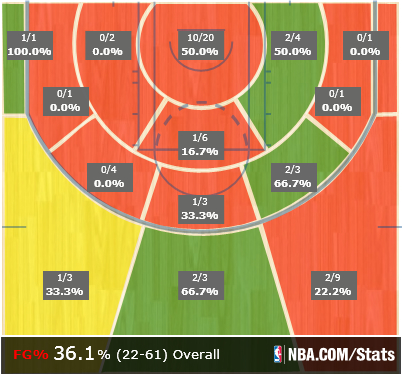 and commits 11 turnovers in the first half WITHOUT FORCING THE LIBERTY TO COMMIT EVEN ONE TURNOVER, that's just pathetic.

Yeah, the Mystics are now 0-0 and they're going to play some team next week. But you can't perform like this, even when fatigued. It goes beyond the Mystics too.

This team is in a city where people have tons of options to spend their time and money for their sports and entertainment, most notably the Nationals and Orioles baseball teams. When the Mystics aren't performing at an acceptable level, that lowers any incentive to watch their games. And when the WNBA is trying to get NBA fans to appreciate their league more, these types of performances aren't going to be an incentive for Wizards fans to want to watch this Mystics team.

It's one thing to lose a game. But this performance certainly wasn't a game where fans got their money's worth of basketball.